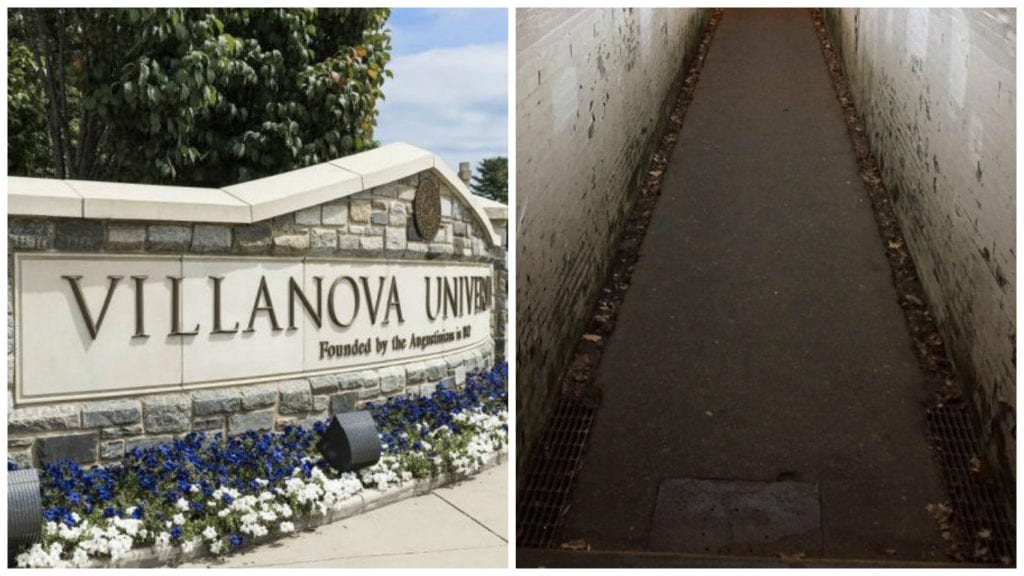 A train tunnel at Villanova, site of the alleged attack

The response? Radnor Police and Villanova’s Public Safety Office have launched an investigation, a campus “Community Conversation” has been called for Thursday night, a student-led peace-in is planned, and the university promised “serious consequences” when the culprits are caught.

Sadly, the alleged attack apparently wasn’t the only ugliness at Nova last week. In a letter to the campus community, Villanova’s president said he’s been “deeply disturbed by several reports of members of our community using our nation’s political process as a justification for behavior and language aimed to intimidate or humiliate people.”

As are we, Father Peter. As are we.

Meanwhile, those election protests in Philly are spreading closer to home.

A group of Bryn Mawr and Haverford College students, among others, plans to march along Lancaster Ave. during Wednesday afternoon’s rush hour. According to a flyer created by Bryn Mawr junior M. Murray, protestors want to “disrupt Main Line commutes to show them that ‘business as usual’ is not acceptable.” After a 2:30 rally at the Clover Market lot, the group will begin marching from Haverford College at 3:30 and end with a sit-in outside the Lower Merion Police Station in Ardmore.

Not only are organizers calling out President-elect Trump for his support of Blue Lives Matter and his “plans to suppress our resistance,” they also have a huge beef with Lower Merion cops, calling them “the strong arm of white supremacy.” In the flyer, protestors calls the Lower Merion PD “our enemy” because of its “widespread practice of racial profiling on the Main Line” and “its unapologetic endorsement of fascism and violent racism.” Oh my.

Switching back to Villanova, a SAVVY salute to Andy Talley who likely coached his last football game at Nova last Saturday, a loss to JMU. Coach Talley’s been a class act for 32 seasons. Meanwhile, the National Champion Wildcats – led by another classy coach (just sayin’) – has picked up where they left off last March with a season opening rout of Lafayette, followed by a squeaker against #15 Purdue. V’s up!

A Wahlberg Not Named Mark or Donnie came to Tredyffrin last week – thanks to T/E schools and the community group, ARCH.

Wahlberg was here to introduce screenings of “If Only,” an addiction awareness film he wrote and produced. (The film was underwritten, btw, by Main Liner Brian O’Neill’s Recovery Centers of America).

Sadly, Jim Wahlberg knows the subject all too well. Both he and his son are in long-term recovery.

Two powerful speakers followed the film: Cathy Messina, a mom who walked into her suburban Philly home two years ago to discover two of her five sons had OD’d on heroin; and former Great Valley mom Liz Tankel whose son, Eric, is in long-term recovery.

Meanwhile, the most recent PA Youth Survey has some interesting new stats about T/E students. The good news? Substance abuse may be trending downward, if ever so slightly.

One more thing: T/E is pretty darn lucky to have a community group like ARCH out educating folks. Ditto Lower Merion’s Coalition for Youth of Lower Merion and Narberth. Radnor’s closest counterpart may be Rosemont’s New Leaf Club, which serves the whole Main Line.

There wasn’t much in Great Valley but that’s changing – thanks to a promising new partnership among the Jonathan Moules Memorial Steps4Hope Foundation, Great Valley Community Organization, and Be Part of the Conversation. Together, the three nonprofits have presented well-attended addiction talks this fall. And GVCO hopes to break ground next year on a multi-purpose facility in Malvern that would host such gatherings.

While we’re on the subject, folks on the front lines of teen depression, suicide and addiction are joining forces to present “Building Resilience and Increasing Protective Factors in Our Children,” on Wednesday, Nov. 30 at Bryn Mawr College, 6:30 – 8:30 p.m. An expert panel of in-patient and out-patient treatment providers will talk about warning signs and prevention strategies. To register for this free event, e-mail [email protected] or call 610-608-8838.

Moving on to lighter news, we have Yin and Yang restaurant openings to tell you about – the colossal new Firepoint Grill in Newtown Square and the teeny-tiny At the Table BYOB in Wayne.

Restaurateur George Paxos reportedly dropped $7 mill to build the 7,500 sq. ft. Firepoint at the new Shops at Ellis Preserve (at the corner of Rts. 252 and 3).

The place hits all the au courante design notes: loads of comfy booths, sleek yet warm, wood-centric styling, open kitchen, glassed-in wine room and bountiful bars, inside and out. “We wanted to be approachable yet theatrical,” Paxos tells SAVVY.

With 250 seats inside and another 150 on the still-under-construction all-weather patio, it’s a whopper. Funny, it’s the world’s first Firepoint but it feels like an established chain in a well-heeled Florida or DC suburb. 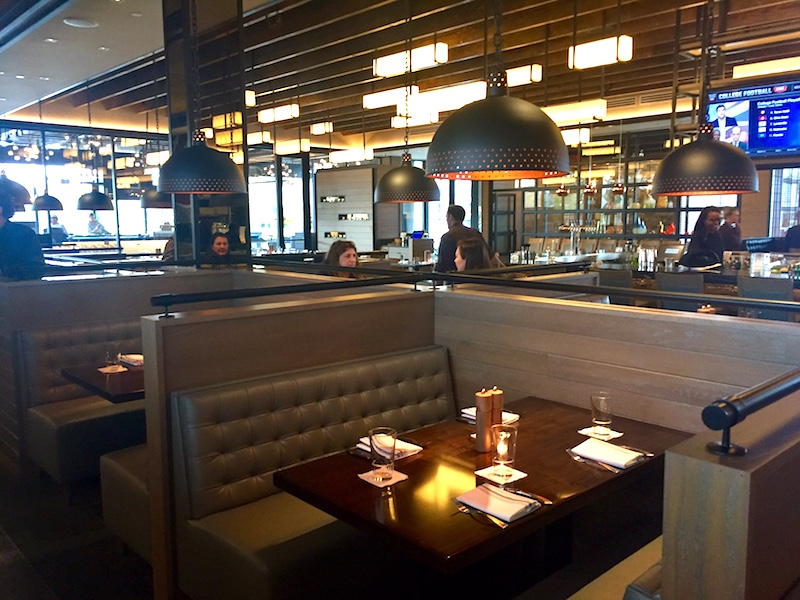 In the hands of Chef Hugh Moran (a Stephen Starr alum), the mostly American food focuses on wood-fired pizzas, chicken, pork and steaks and lighter fare.

At lunch, we liked but didn’t love the Firepoint Chopped Salad ($15) and a friend thought her chicken/avocado salad sandwich ($14) lacked crunch. At dinner, the Linguine Pescatore ($27.50) and Dry Rubbed Beef Ribeye ($38) were winners. Alas, we found the otherwise tasty Whisky Glazed Shrimp ($28,50) a tad heavy on the sweet sauce.

If Firepoint seems like a refined take on a something-for-everyone Cheescake Factory, that’s, well, the point.

At the Table, an itty bitty but hugely ambitious BYOB debuting this week in Wayne, may be the next best thing.

At the Table owners Alex Hardy and Tara Buzan.

We’re talking seriously fine dining here. If Wagyu beef and Duroc pork ring a bell, grab a seat At the Table. (And make it pronto ‘cause there are only 20 of them.)

Like Laurel, At the Table is all about tasting menus, although a la carte dining is available. You pick either five courses for $65 or 8-courses for $95 and order from 10 straightforward categories – Chicken, Beef, Beet, Carrot, Chocolate, etc. (Vegetarians and vegans are welcome, too.)

Best to dine here with pals of similar palates. Not only does your table have to agree to go the tasting route, it has to agree on each course. 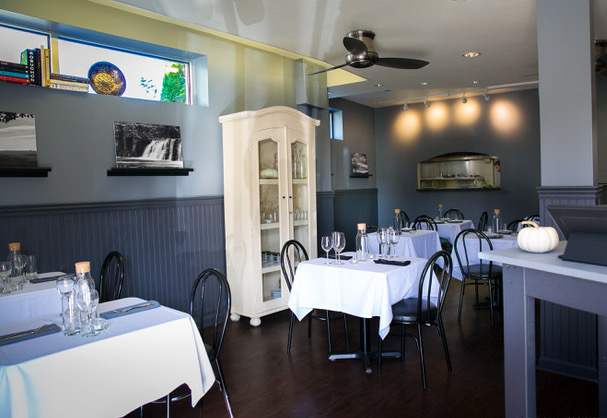 Partners in the venture – and in life – are Wayne natives, Alex Hardy, Stoga ’02, and Tara Buzan, Shipley ’97. The couple lives five minutes away with Tara’s six-year-old son and their three-year-old pit bull.

(Alex jokes about asking Tara if she wanted a restaurant or a ring. Guess we know her answer.)

He sharpened his chef knives at Majolica, Gilmore’s, Rembrandt’s and Pumpkin. Most recently, he helped open Autograph in Eagle Village.

Until 2011, Tara owned Taste of Britain, also in Eagle Village. She plans to continue her catering company, To the Table, while she runs the front of the house At the Table.

One Table too many? We hope not.

Beginning Nov. 18, At the Table BYOB, at the former Creperie Bechamel on Louella Court, will be open Tues. – Sunday at 5 pm. Reserve on Open Table. Private parties on Monday nights. Lunch and weekend brunch TBD.

Your days to dine at the Old Guard House Inn, a Gladwyne institution, are numbered. To 45, give or take.

Unless you’re a Union Leaguer.

The League bought the Inn – parts of which date back to 1790 – and will turn it into the Union League Guard House, for members only, in 2017.

(Founded in 1862, the League’s a spring chicken by comparison.)

With four in ten members living on the Main Line, the Union League’s been searching for a suburban satellite for 20 years.

Autograph Brasserie in Eagle Village has hired a DJ to liven up the bar on Fridays and Saturday nights. Radnor’s own DJ Strong starts spinning at 8. We hear he keeps it low-key during dinner, then pumps up the volume with Motown, Funk, Disco, Classic 80s and current hits. 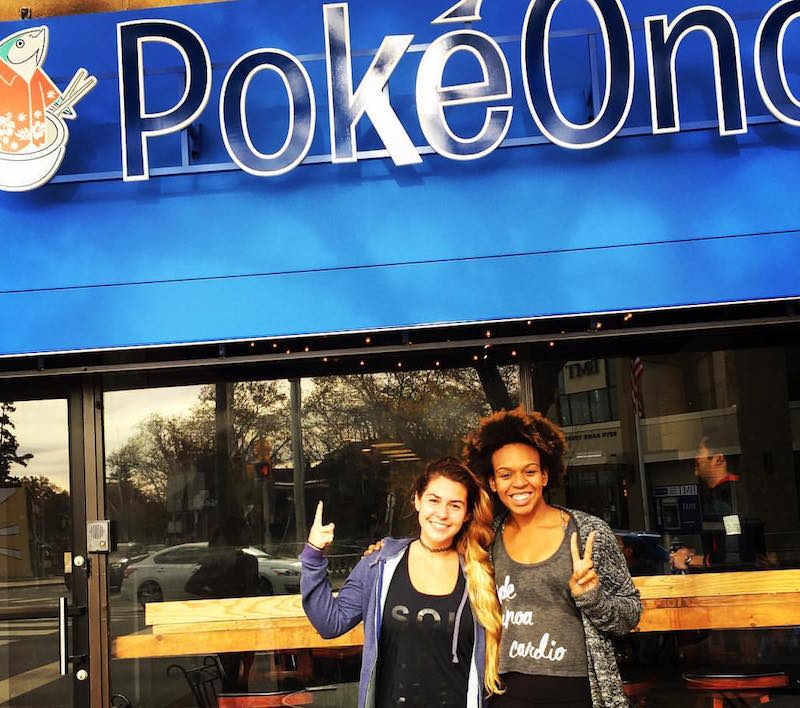 Maddie and Sabine from nearby SoulCycle give the new PokeOno the thumbs up.

Some call it Hawaiian sushi but we think it’s more like ceviche or tartare.

At PokeOno, you build your own bowl ($8-$12), starting with rice or greens, topping it with tuna, salmon, shrimp or tofu, then adding sauces, veggies and toppings.

(BTW, Poké’s definitely having a moment – they just started serving it at Azie on Main in Villanova, Mikaido Thai Pepper in Ardmore and Teikoku in Newtown Square.)

The Main Line has salons galore for hair and nails. Now, there’s one focused only on our eyes. 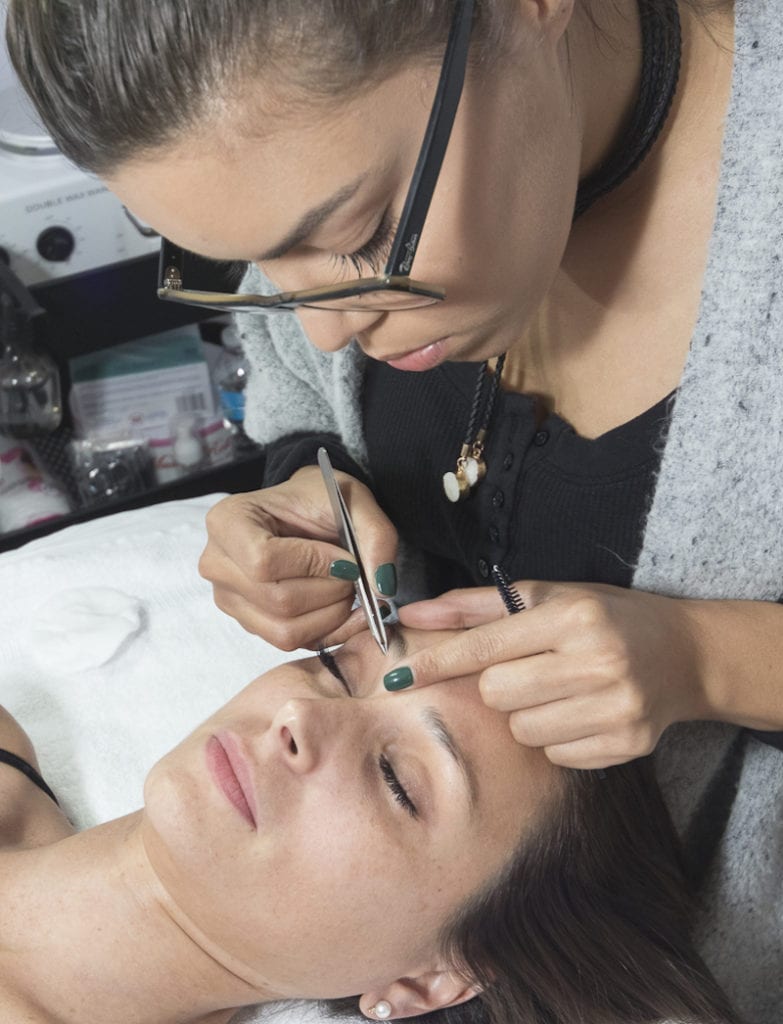 Deneen Marcel shapes a model’s brows at her eponymous salon in Bryn Mawr.

Deneen Marcel Lashes specializes in custom eyelash extensions ($50- $500) and brow shaping ($20 & up for tinting and shaping; $650 for microblading). Her team of pros will also do your makeup for special occasions and photo shoots.

In light of the post-election tumult, Thursday night’s talk at the Wayne Art Center sure sounds timely. Tony Campolo will present “Coming Together in a Nation That’s Falling Apart.”

A former Radnor parent, Campolo’s a gifted speaker – he’s appeared on The Colbert Report, Nightline and Crossfire. He’s also an ordained Baptist minister, sociology professor at Penn and Eastern, author of 30 books and an advocate for global social justice. The second speaker in this year’s “Homegrown” lecture lineup, Campolo speaks Nov. 17, 7 – 8 p.m. Tickets are $20 in advance, $25 at the door.