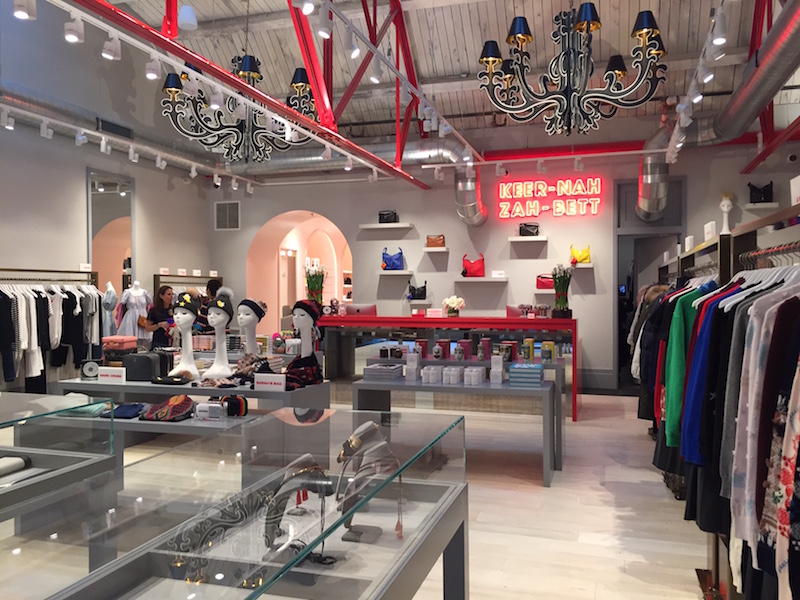 It will be fascinating to see how the Main Line responds to Kirna Zabête, just open near La Colombe in the new Bryn Mawr Village.

Because its 3,000 square feet are unlike anything we’ve seen in these parts. (And you know we get around.)

A boutique for serious fashionistas that – with touches of warmth and whimsy – doesn’t take itself too seriously.

If it looks like a trendy emporium you’d stumble upon in SoHo, well, that’s because it is.

Who will be their Main Line counterparts? Hard to say. But they’re sure to be well-heeled – and we do mean that literally. This is a luxury fashion house, after all.

Note to those less flush: lots of truly nifty gifts and notions can be had for under $100. 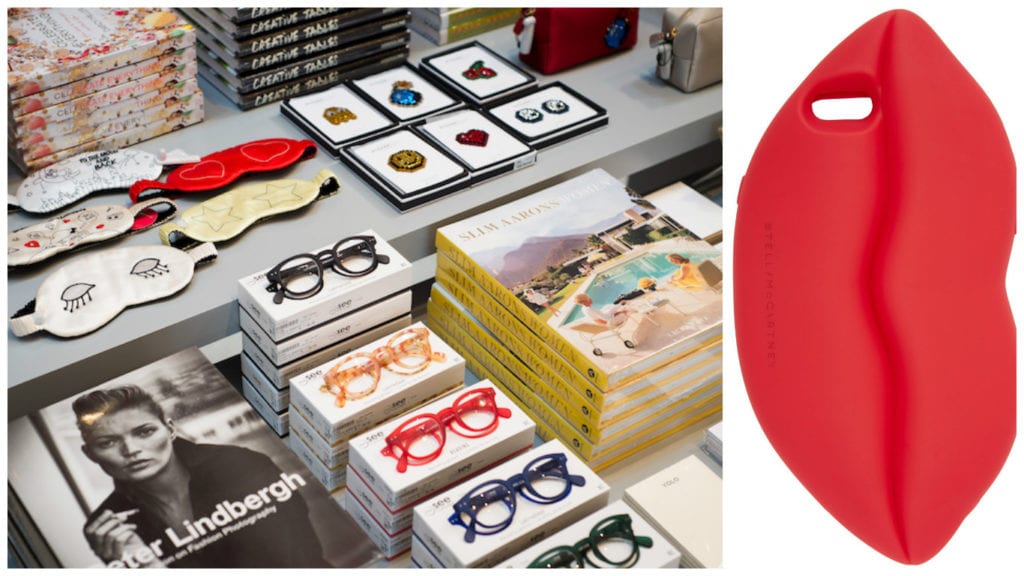 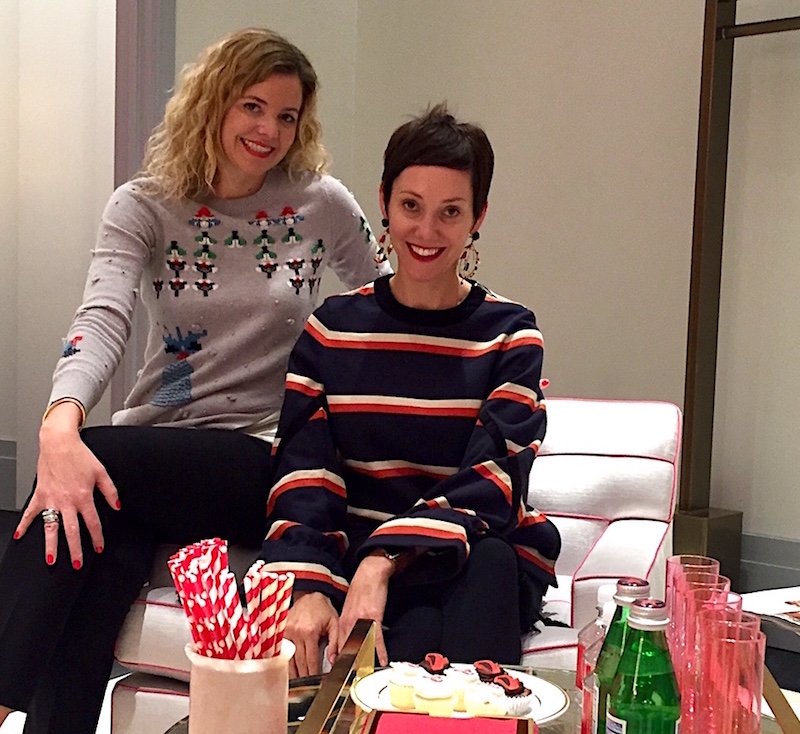 Beth and sorority sis Sarah Easley opened the first Kirna Zabête in SoHo in 1999, when they were just 27. (The store combines their college nicknames – Zabête being French for Elizabeth.) Kirna, aka Sarah, has since moved on, but Zabête is full speed ahead. A Palm Beach outpost will open next year.

So what prompts a SoHo-slick store to expand to our fair ’burb?

Six years ago, Beth and her real estate magnate hubby, Rob Buccini, moved their brood to a 130-acre former dairy farm in Chadds Ford. (For a peek at the fam’s smashing new manse, pick up this month’s Harper’s Bazaar .)

The four Buccini kids, ages 7 to 13, attend the same Main Line prep school. And that’s where Beth got to talking with her new suburban pals. Turns out they loved high fashion but hated the mall.

“I saw how these women were dressing,” Beth tells SAVVY. “They all look great but they’ve been underestimated.”

What the Main Line lacked, in Beth’s opinion, was an “interesting women’s fashion experience.” Busy local gals may be “running around in yoga clothes or jeans,” Beth says, “but many will splurge on a special designer bag or shoe.” 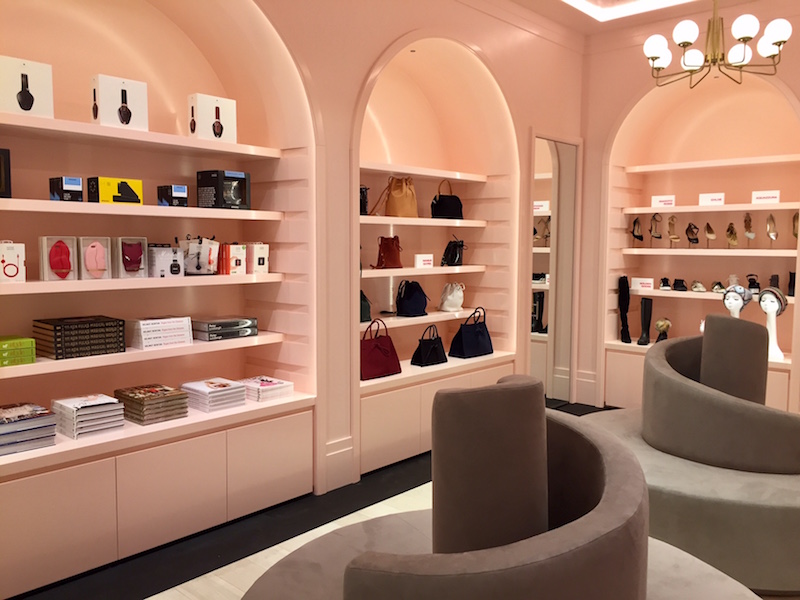 Unlike most Main Line boutiques that buy stateside, Beth’s team hits Paris, Milan and London to find “the best edit” of the “best designers of today and tomorrow.” As a result, KZ carries “more than 50 designers no one else around here has,” Beth says.

If you’re a gal who knows Mother jeans are nothing like Mom jeans, that RE/DONE Levis are having a moment, and that Golden Goose is today’s “it” sneaker, KZ’s right up your fashion alley.

If not, stop by and get educated.

So nice to see the lights on at the long vacant Tudor-style building at the corner of Lancaster Ave. and N. Valley Rd. in Paoli.

After waiting nearly a year for upstairs renters to vamoose, KingsHaven Properties spent two years rehabbing the ramshackle, circa 1925 structure. 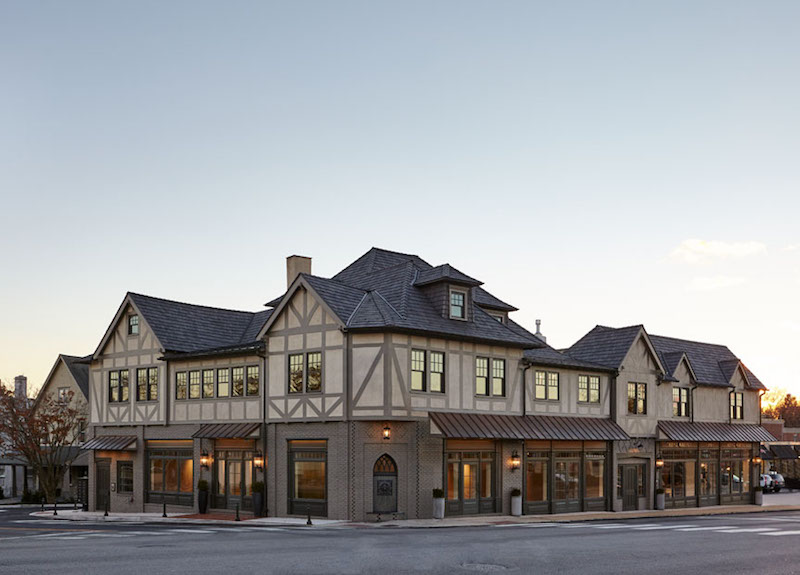 Work crews gutted the place, knitting three buildings solidly into one. KingsHaven shored up the shoddy Tudor facade, knocked down a rear cottage and even bought the house behind it to maximize parking.

After our nickel tour, we’re pleased to report that the inside’s just as swell as the outside.

Now dubbed the Bennington, the first floor has five retail spaces – the largest of which houses the terrifically tasteful KingsHaven Design, the company’s spinoff home décor store, set to open to the public Dec. 10. 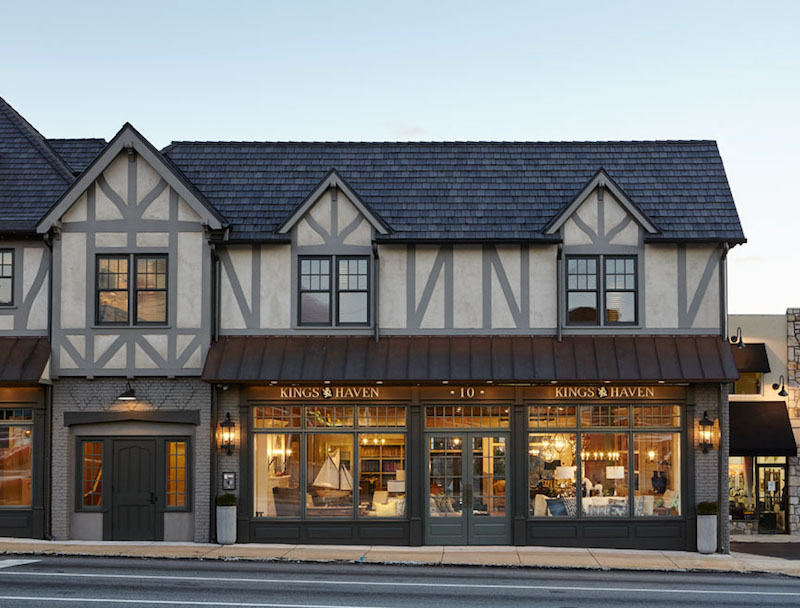 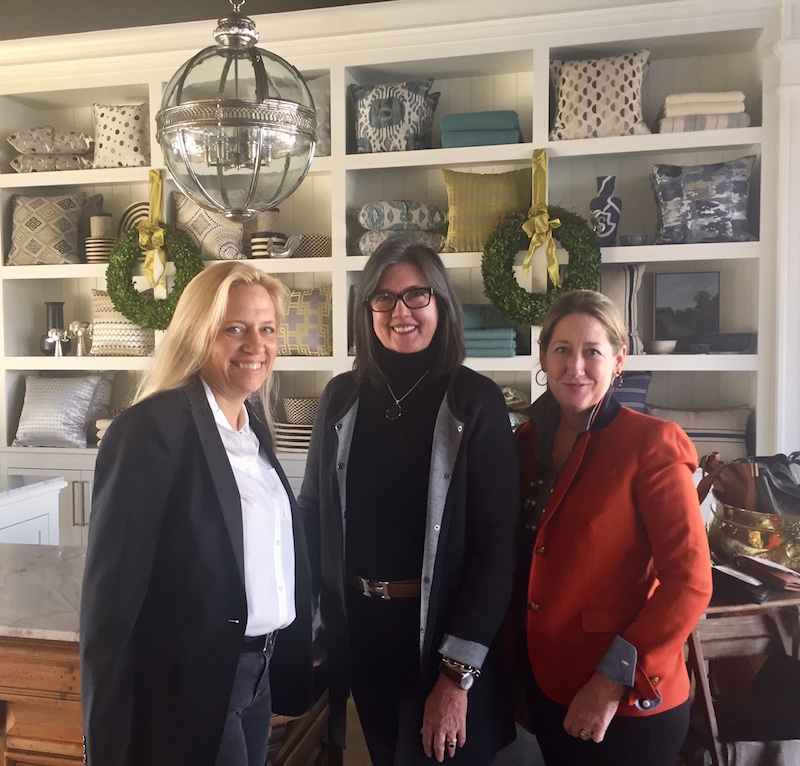 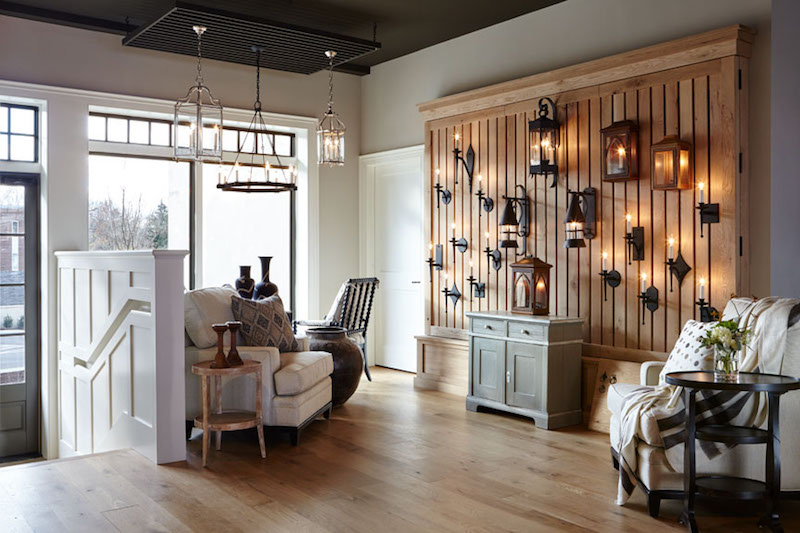 At least three other slots are up for grabs. The hope is to attract tenants of a feather – perhaps a curtain or antique hardware company – making the Bennington a destination for high-end home design.

Clearly, KingsHaven saw something in that down-at-the-heels Paoli corner that many missed.

“It had the potential to be charming,” KingsHaven CEO Lauren Wylonis tells SAVVY. “There were good bones beneath the ugliness.”

A forensic psychiatrist until five years ago, Lauren clearly can read real estate the way she once read people.

In 2014, her company bought the neglected Pembroke estate (circa 1898) in downtown Wayne for $2 million, totally modernized and expanded it, and is now listing it for $7.6 million. (Estimated monthly nut? $29,000, but if you have to ask…)

As for downtown Paoli, Lauren is convinced her handsome restoration is just the beginning of the town’s renaissance. “I believe Paoli’s going to be another Wayne in 15 years.”

With so much good stuff on Paoli’s drawing board – a new train station complex, walk-to-train housing, and a more pedestrian friendly Route 30 – she just might be right.

Remember the fuss over the reported knockdown of a black female Villanova student by a group of white Trump-happy guys?

At the request of the alleged victim, Radnor detectives are no longer investigating the alleged attack in the creepy SEPTA tunnel on campus. Villanova officials followed suit.

So case closed, but no word on why.

“It was hard to move forward, being that the student did not want to pursue the matter,” Villanova spokesman Jonathan Gust told the Inky, adding, “The end of the investigation doesn’t diminish concerns and discussion that have taken place on campus after the alleged incident.”

Like his fans around the world, we’re shaking our heads at the shocking loss of 2007 Stoga grad, Roger Hobbs, whose brilliant, brief life was snuffed out last month.

The bestselling mystery writer (“Ghostman” and “Vanishing Games”) died of a drug overdose, reportedly “with a crowd of friends around him“ in Portland, OR on Nov. 14. 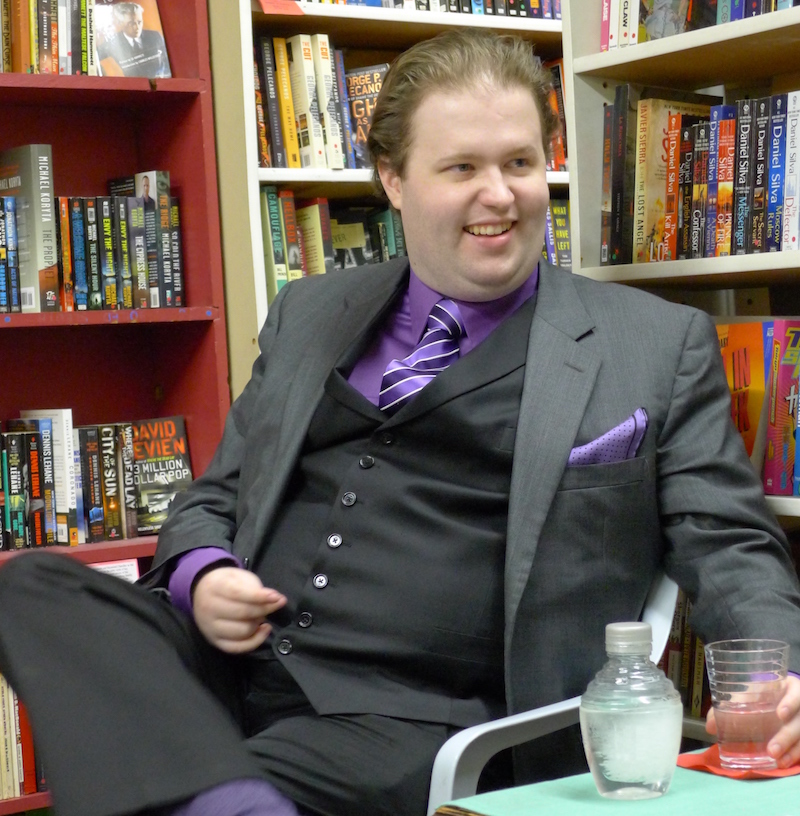 Author Rogr. Hobbs, Conestoga Class of 2007, at a Portland book signing at age 24.

By any measure, Hobbs – no one called him Roger – was a prodigy.

He finished his first novel at age 13.

A play written his senior year at Stoga won a Pittsburgh theater festival and was professionally produced.

At age 20, he was published in the New York Times. (In his essay, “Instant Message, Instant Girlfriend,” he called his high school self a “bottom of the barrel, plump, silent, painfully awkward dweeb” whose online persona catapulted him from an “overweight, overdressed frog to a charming, handsome, technology-savvy prince.”)

He wrote “Ghostman” his senior year at Reed College – a book that would be published in more than 29 countries, climb bestseller lists and be optioned for a movie by Warner Bros.

By age 25, he’d won at least three major mystery writing awards and had been nominated for a slew of others.

Hobbs was also a character.

Stoga classmates recall him wearing a suit and tie to class  – a practice he continued at Reed – and introducing himself Bond-style: “Name is Hobbs, Roger Hobbs.”

A meticulous researcher for his novels, he would immerse himself in shadowy, sometimes dangerous worlds. He reportedly once sought someone to bury him alive so he could write authentically about the experience.

His thesis professor at Reed remembers him as extremely well-read, “genial, witty, a bit masked …. a fascinating character.”

Said one of his heartsick publishers: “His future was so sparkling … and his talent so rare, it beggars belief that he won’t be here to deliver on his promise.”

Donations in Hobbs’ memory may be made to Philadelphia Young Playwrights.

And speaking of school numbers, Lower Merion’s are seriously ballooning. In fact, it’s one of the fastest growing districts in the state.

Experts say most of the new kiddos aren’t coming from new construction but from young families buying older homes vacated by empty nesters.

Tredyffrin-Easttown is growing, too, but not so dramatically. According to our math (using district-supplied stats), T/E’s student body will swell some 10 percent from 2012 to 2026, when enrollment is projected to be 6,991. (Point of reference, T/E had 6,500 boomer students in mid 1970s.)

Radnor, meanwhile, has a new school superintendent. The former assistant supe in top-ranked Unionville-Chadds Ford, Kenneth Batchelor, 45, will be paid $220,000 in the first year of his five-year Radnor deal.

How weird is it that we can belly up to the bar at the …. Acme? 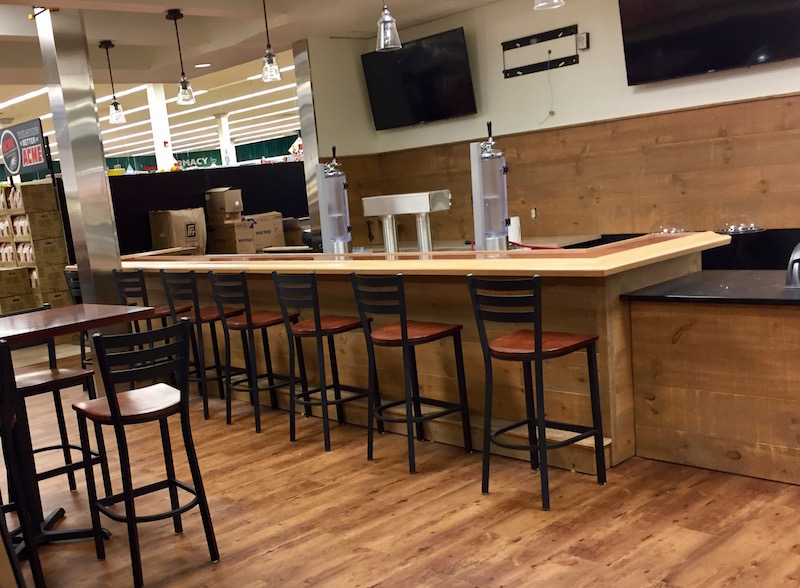 To lure shoppers back from Wegmans and Whole Foods, the Paoli Acme now pours cold ones at its in-store Frosted Mug bar and dining area.

Rather take one home? You can buy brewskies by the bottle, build-your-own six-pack or 12-pack and even fill a growler with the Mug’s rotating choice of draft beer.

Also on tap for the Paoli Acme in early 2017: a Starbucks kiosk with limited seating. Sadly, self-checkout had to be nixed to make room.

Wine’s here, too – lots of the usual value labels like Yellowtail and Woodbridge along  with somewhat more exalted pours like Meiomi Pinot Noir, a personal fave.

The Devon Acme began selling beer in late 2014 and added wine this October.

Alas, there are no plans to add beer or wine at its Newtown Square or KOP stores, according to Acme spokesgal Dana Ward.

Cabrini swimmers will be paddling and kicking their little hearts out Sunday, Dec. 11 at a swim-a-thon in memory of their late pal, Eric Schultz.

The longtime boyfriend of Cabrini senior swimmer Moira Prior, Eric died from an accidental drug overdose in June at age 26. (Cabrini had lost a student to addiction just a few months prior.)

The Swim Blue event will benefit Bridge to Recovery Foundation, a brand new Delco nonprofit that raises addiction awareness and gives financial help to people in recovery. Free admission. $10 to swim. Speakers, music, food, raffles and fun for all ages.

Crooner Bobby Rydell, now 74, will be signing copies of his tell-all, “Bobby Rydell: Teen Idol on the Rocks” at Main Point Books in Wayne this Saturday, Dec. 10, 2-4 pm.

Expect extra hustle and bustle at the new King of Prussia Town Center this weekend.

The lifestyle center is staging its first Winterfest, a first step toward fulfilling its vow to give KOP a legit downtown that’s not the mall.

The free festivities across from Wegmans include student caroling, ice sculptures, hot chocolate and restaurant samples, face painting and crafts. Radio station More-FM will spin holiday tunes from noon to 2 and Santa stops by at 2:30.

And while we’re talking about the KOP Town Center, a SAVVY shoutout to the Malvern gal who who painted those vibrant, selfie-friendly window wraps on storefronts not yet leased. Nice work, Stephanie Corfee.

And finally, a place for your Center City radar. Because, like you, we do venture into town from time to time.

We snagged seats at the hip and piping-hot Harp & Crown last weekend. Go for the funky, drop-dead decor, stay for the tasty small plates and libations (of which “Charred Stone” was especially rock solid). There’s even bowling below ground.

Just be sure to reserve first – sooner rather than later.

In the next SAVVY: nifty gifties with local ties. Until then, Merry Merry.