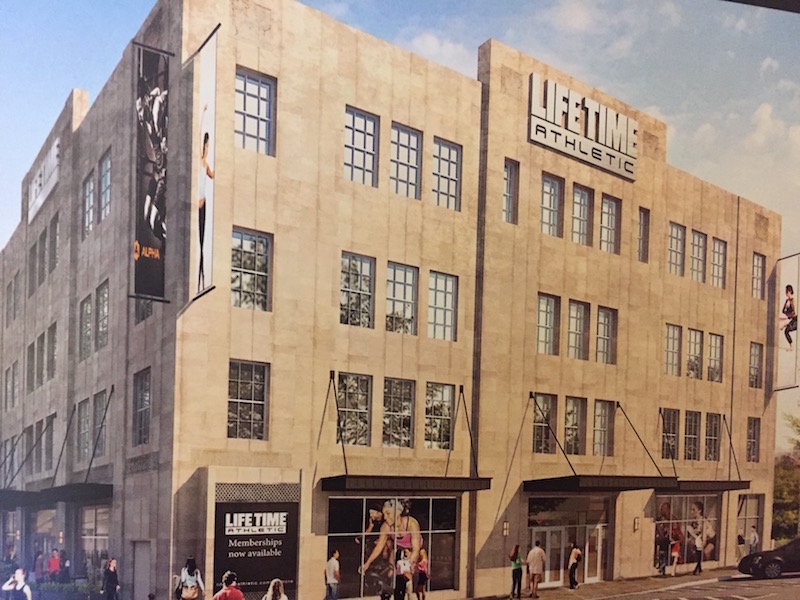 Coming soon to a deserted department store near you: Life Time Athletic.

The elite health & fitness company likes the Main Line so much, it’s putting not ONE, but TWO of its monster clubs here.

Our first Life Time: a scratch-built, 140,000 sq. ft. whopper with a “resort-like” outdoor pool and waterslides will debut in June on Swedesford Rd. in Tredyffrin. (Life Time’s calling it King of Prussia, but the map says it’s Wayne – if only by a hair.)

And just announced: our second Life Time will be in Ardmore – an exclusive “diamond” level club in the former Macy’s building, one of two Grand Dames of Suburban Square. (The tall Times building is the other.)

Life Time Ardmore will share the ground floor with West Elm, a Pottery Barn furniture spinoff, but gets the rest of the Art Deco-era structure to herself – the lower level, plus the second, third and fourth floors.

So, there you have it: the forlorn old gal’s about to undergo the facelift of, well, her lifetime. (She’s been a Strawbridge’s or Macy’s for all 87 of her years.)

Diamond-club status puts Ardmore a notch above KOP’s “onyx premier” club and in some rather rarified air.

And just what will your membership buy?

(Alas, space prohibits the indoor tennis, hoops, squash and racquetball courts and the indoor and outdoor pools coming to KOP.)

Still, lots of la-di-da amenities are en route to Ardmore, including:

*An LT medical clinic (also in both clubs) offering services for “graceful aging” and control of weight, cholesterol and blood sugar.

*A LifeSpa with hair-and-nail salon services, medical-grade skincare and massages.

*A Kids Academy, aka babysitting but with sports and enrichment lessons. You sweat/spa/shower; LT minds the small fries for up to three hours.

Truly, you could spend most of your life at Life Time, working out and hanging out – hey, even working, if you must. (Laptops are welcome).

Founded in a Minneapolis suburb in 1990, LT’s been on a growth spurt of late – 120 clubs and counting – that’s leaving its competitors sucking wind. (A third area club opens in June in Fort Washington.)

The company feeds on grand ambitions, and with them, grand promises.

“The high-end finishes, the high team-member-to-member ratio and the overall experience will be elevated like none other, “ says Bushaw. Staff in Ardmore and KOP will “know every member by name and care for each like family.”

Not just a gym, Life Time “is a healthy living, healthy aging and healthy entertainment destination” that aims to be your “go-to club,” Bushaw says.

Your other country club, as it were.

And the KOP LT – with its outdoor aquatic wonderland – could be a dagger to the heart of area swim clubs like Martin’s Dam and Picket Post (already limping along on one pool).

But the places really bracing for a hit – LT’s head-on competitors – seem to be member-based, full-service joints like Club La Maison in Wayne, AFC Fitness in Bala Cynwyd, ACAC in West Chester and the YMCAs in Berwyn and Haverford.

Is anyone surprised that – except for the newish Haverford Y – they’ve all been on renovation sprees lately?

Meanwhile, the Life Time in KOP/Wayne is already in high gear: hiring staff and signing up members. 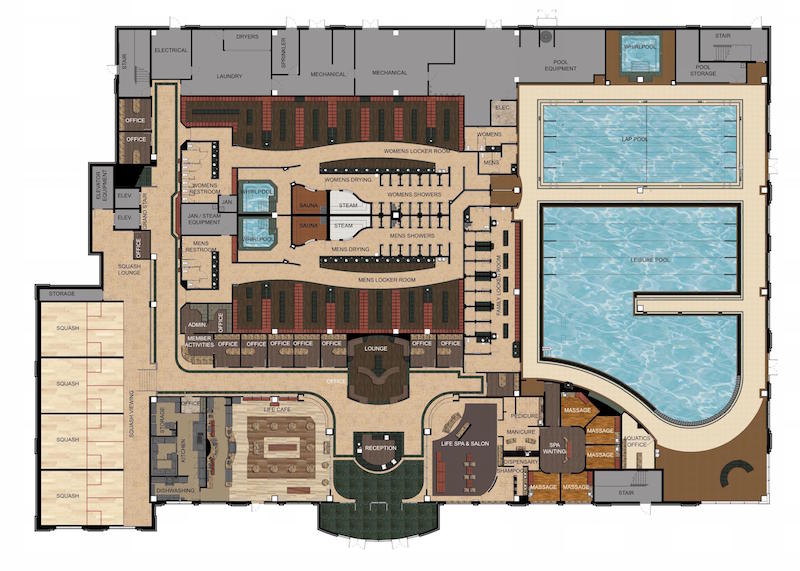 A rendering of the ground floor and indoor pool area at the Life Time in Tredyffrin/KOP. 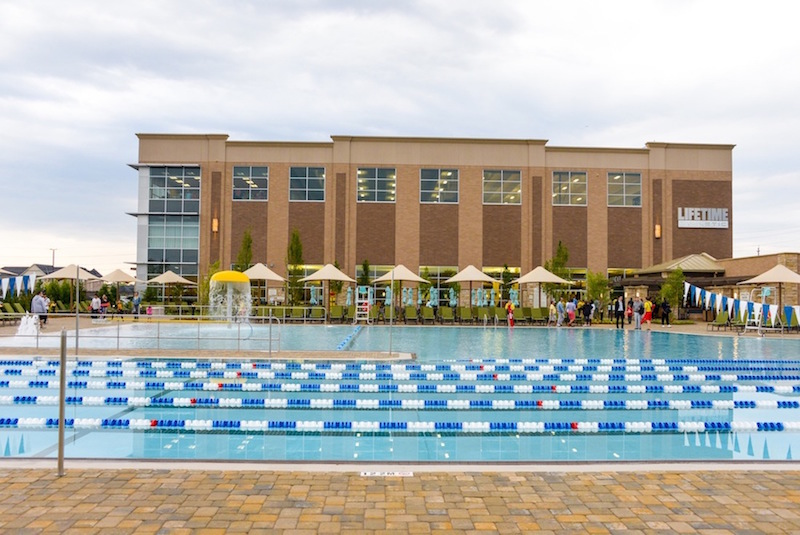 When it opens in June, the outdoor aquatic center at Life Time KOP/Wayne will look similar to this one in Ontario. 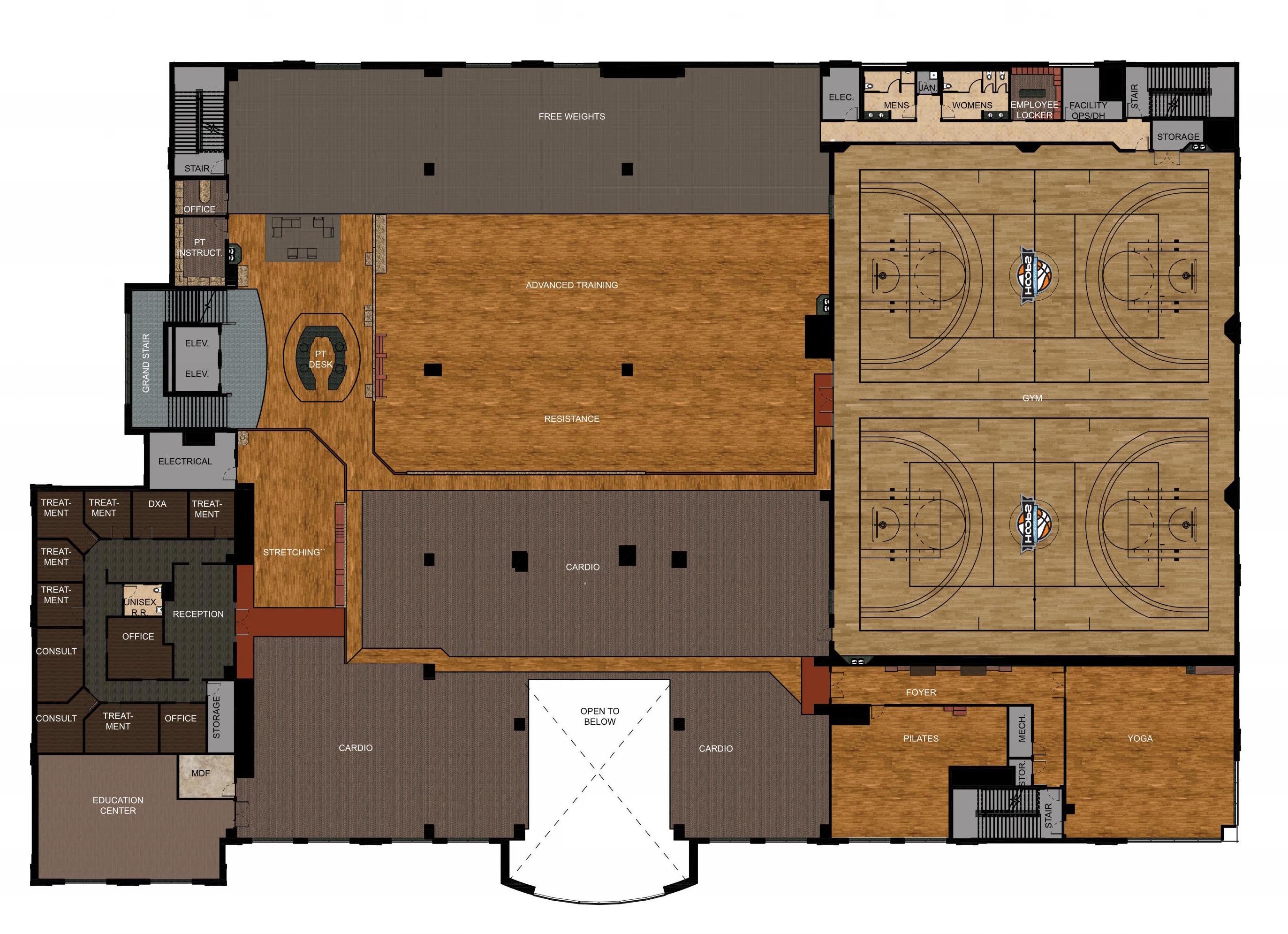 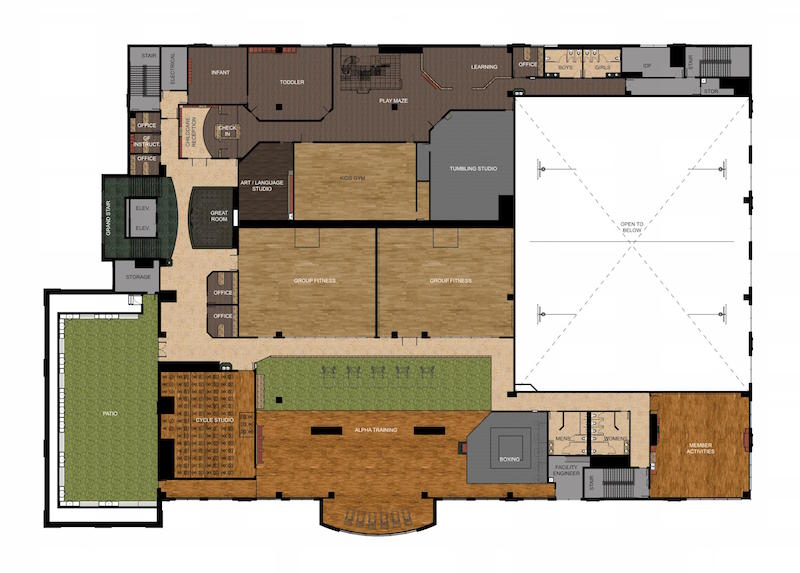 We stopped by the on-site “preview center” trailer where tire kickers have been sitting down with “member specialists” to hear about the perks of founding KOP memberships. Demand is so high, we’re told they’re already booking sales “reservations” into February.

And that’s where we zeroed in on the fine print and prices: Usually disclosed only face to face, Life Time membership fees appear to be subject to change at any time.

Current introductory rates for Life Time KOP are as follows: single= $119; family of two=$179; family of three=$219; and family of four or more= $259. Families of five and up pay $40 more per child under age 12, ostensibly to cover Kids Academy costs.

(Point of comparison: the new LA Fitness in the nearby KOP Town Center posts its rates online and, no surprise, they’re a fraction of LT’s. LA Fitness charges a $99 initiation fee, then $20-$30/mo. for singles. But, apologies to LA Fitness, Life Time’s offerings put them in a very different league.)

Life Time’s Ardmore rates are TBA but we’re told single-member monthly fees will be about $40 higher.

Management also is hush hush about membership targets. But we hear from preview center sales staff that they expect 5,000 to 8,000 members (!) in KOP.

Suburban Square will be more intimate, they say, because of its smaller quarters and higher member fees.

A sales center there won’t open until June.

But if Life Time Ardmore already has your heart pounding, the waitlist is open. 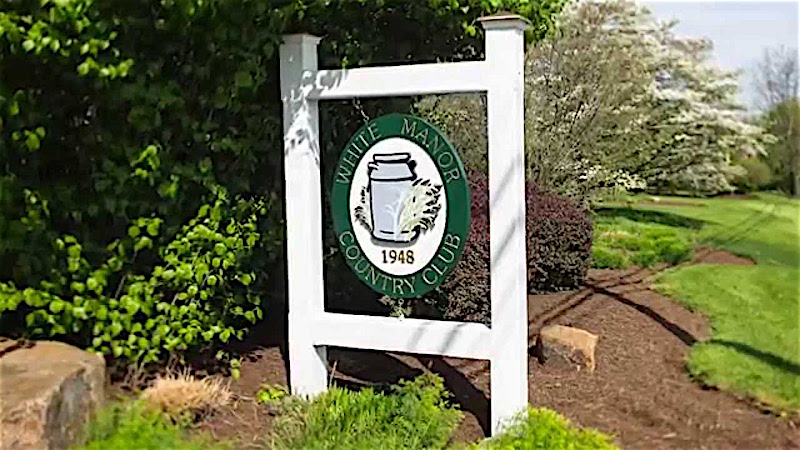 In what may be a Main Line first, the country club on Providence Rd. in Malvern is no longer owned – and run – by  its members.

According to our local source, White Manor was running “an extremely small deficit” and needed more members. Unlike nearby Aronimink, there’s no waitlist. Our source attributed White Manor’s woes to a decline in golf’s overall popularity.

Certainly, the golf at WM is top drawer. Redesigned by Bobby Weed in 2003, the challenging, scenic course is often ranked just a notch under Merion.

Our source says bondholders felt that turning White Manor over to a deep-pocketed, professional management company would be a win win: Bye-bye, debt. Hello, club improvements.

Sure, there was some pushback at first, but the motion to sell ended up carrying the day rather easily, he says.

White Manor is Concert Golf Partners’ 14th club “recapitalization.” Some 100 clubs have gone this route either with Concert Golf or other firms. “Hundreds more [clubs] are considering this logical path,” says Nanula.

Plus, putting day-to-day management in the hands of hospitality pros means board members “get to go back to just enjoy their club,” he says.

Should be fascinating to see if any other local clubs follow White Manor’s lead. We hear Philmont, for one, may be looking for a buyer.

Switching back to Suburban Square, Life Time isn’t the only big gun coming to Ardmore. DryBar, the original (and ubiquitous) hair blowout chain, will open in the space between SoulCycle and Kendra Scott in late summer.

The Center City DryBar is a hit; we’re guessing the salon in Ardmore will be just as frantic. (Reserve now for Academy Ball 2018. Nah, just joshing. Pretty sure you can wait until the phone’s hooked up.)

Also Ardmore-bound: an outpost of the high-end “nail spa” chain, Anthony Vince. But you’ll have to wait about a year to indulge in their head-to-toe services (including waxing, facials and massage).

Anthony Vince is taking space on the ground floor of the four-level Suburban Square parking garage under construction on Coulter Ave. So it’ll be a while.

A SAVVY shoutout and brava to Main Line native Sara Schmidt, who just took her final bow with the rest of the Jersey Boys cast on Broadway. 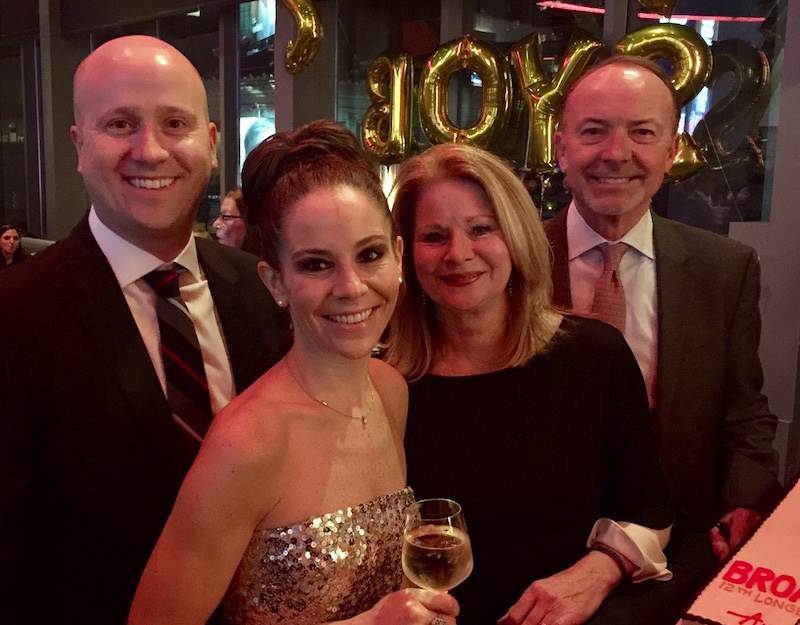 The ’94 Stoga grad played the lead female role, Francine, an astounding 4,400 times during the show’s 11-year Broadway run that ended with Sunday’s matinee. It seems our Sara’s got staying (as well as star) power. Indeed, she’s one of just three cast members who stuck with the show for its entire run, the 12th longest in Broadway history.

“Shows like this happen once in a lifetime,” Sara tells SAVVY via e-mail. As Francine, she performed at the Super Bowl, the Tony Awards, Letterman and the Today Show (five times).

Thrills all, but what she’ll miss most is “walking through the stage door every day and seeing all my friends. We are family.”

Her favorite roles from her days at Conestoga (’cause we’re curious that way)? The witch in Into the Woods and Sally in Me and My Girl.

After, fingers crossed, a well-earned warm-weather vacation, she’s “also looking forward to spending some time on the Main Line.”

And we’re looking forward to seeing you here.

In a sign of these tragic times, a group of concerned locals has just trademarked the name, FADD (Families Against Drug Deaths), and will officially launch the charity at an all-ages benefit concert next week.

“Music in Memory: a Tribute to Ryan and Jeremy” is set for Thursday, Jan. 26 at the New Leaf Club in Rosemont. 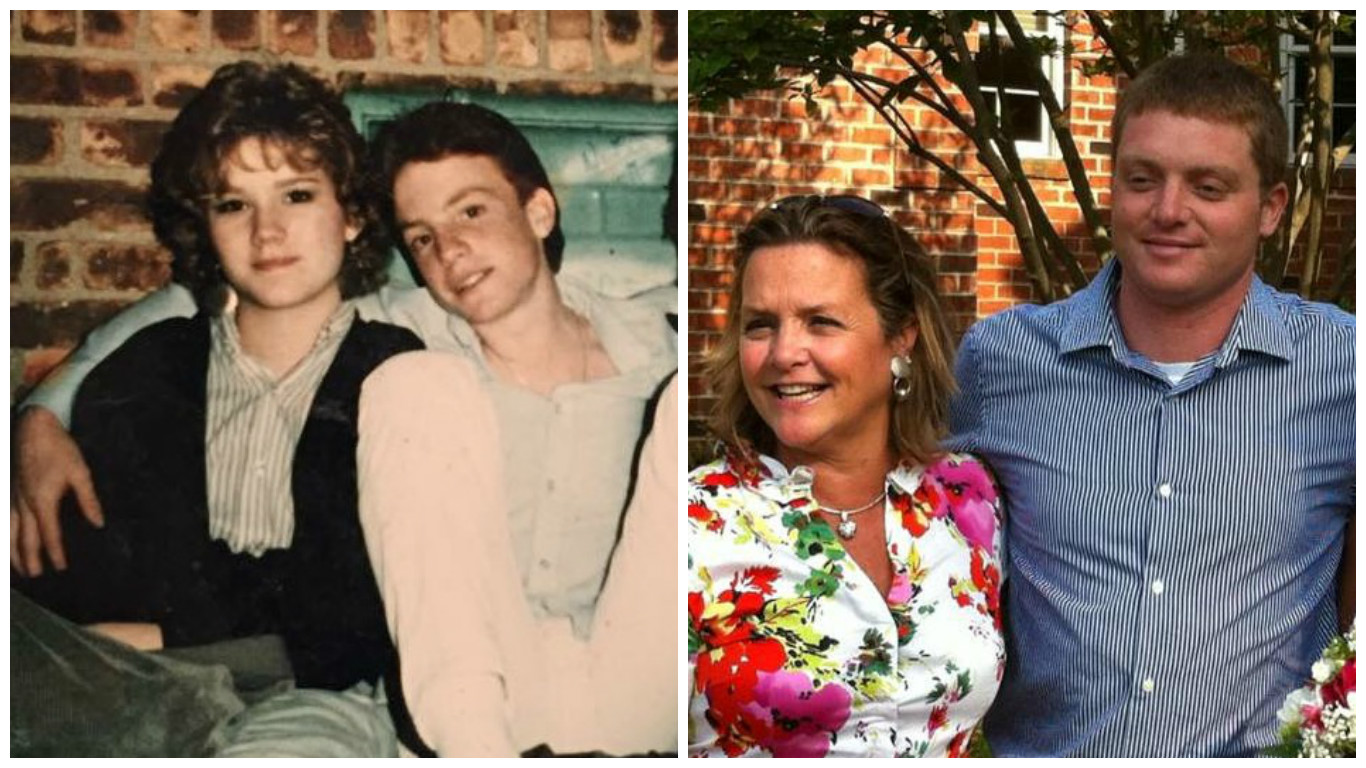 (Left) Jeremy DeFelice, whose parents were Lower Merion natives, and a friend. (Right) Wendy Monaghan and son Ryan, a month before his death in 2011.

Its organizers, Sara Moyher and Wendy Monaghan, have much in common.

Both are real estate brokers at Berkshire Hathaway in Wayne.

Both lost loved ones to addiction.

Both are among the founders of FADD.

Remembered as generous, funny, smart and loving, Sara Moyher’s brother, Jeremy DeFelice, began his battle with addiction in middle school and lost it shortly before his 24th birthday.

Wendy Monaghan remembers her son, Ryan, a Radnor High grad, as a quiet, gentle and good soul who adored animals and music. Ryan died from a heroin overdose in 2011 at age 29. His mother created Ryan’s Hope at Peter’s Place, a grief support group for families dealing with a substance-abuse death.

“Music in Memory” will raise funds for his namesake Newtown Square sober living home, Ryan’s House, open to men in recovery since January 2016.

A SAVVY shoutout to Berwyn cooking prodigy, Marty Snyder. The 9-year-old beat out 5,000 competitors (ages 9 -15) to appear on the Food Network’s “Chopped Jr.” 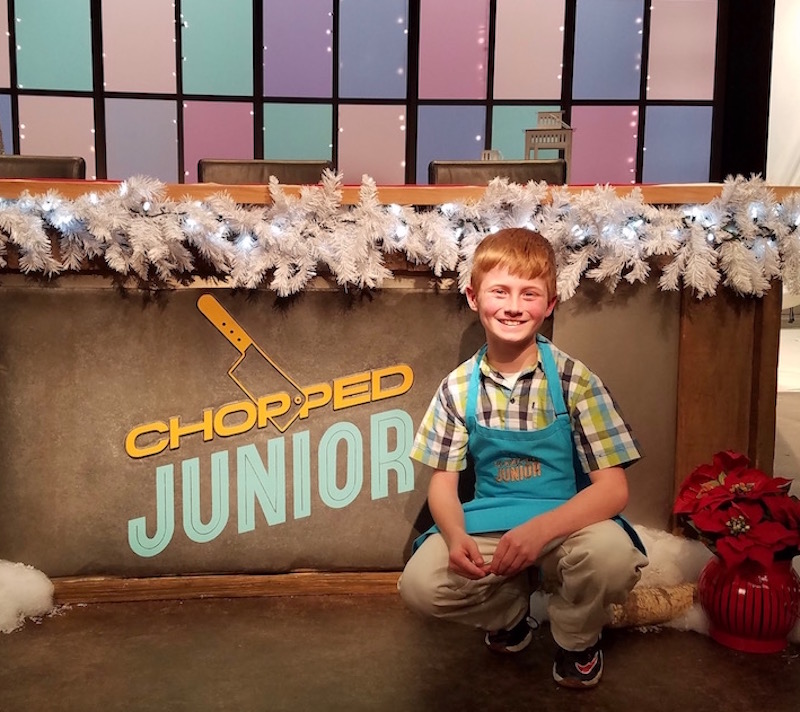 Besides major bragging rights, shouldn’t he at least get one of those “participation trophies” they award in Little League?

On second thought, scratch that. He’s a wiz on the baseball diamond as well as in the kitchen so we’re guessing he already has plenty of shiny hardware.

In any event, our door’s open, Marty. Come chop for us anytime.

A DVR alert for fans of Nectar, Berwyn’s perennially popular Asian-fusion restaurant. Nectar Chef Patrick Feury and his brother, Terence Feury (former chef at Philly’s Fork and now a chef in Newport) will star in the Jan. 19 edition of the Food Network’s “Beat Bobby Flay.” The two will face off against each other for a chance to take on celebrity chef Bobby Flay. 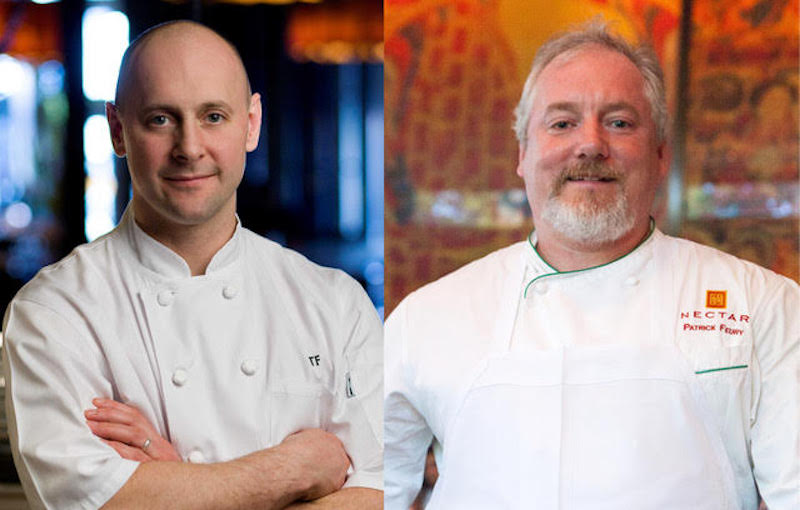 Judges are Michael and Bryan Voltaggio, winner and runner up of Top Chef, season six.

No need to set the DVR to watch another local gal act her little heart out. Nor do you need a lot of time.

Meredith Antoian, Conestoga ’09/NYU ’13, will resume the role of Andie on the web series, “Here We Wait,” Jan. 24. An indie TV show shown in 6 to 8 minute morsels online, “Here We Wait” is quirky cool: It takes place in a restaurant in purgatory, aka Here.

Here’s a new clip of Meredith talking about the show:

And finally, a nod to our fair city. In one of its fairest burbs. Wayne.

The two guys responsible for Philly becoming the nation’s first World Heritage City (!) are about to tell us how they pulled it off. 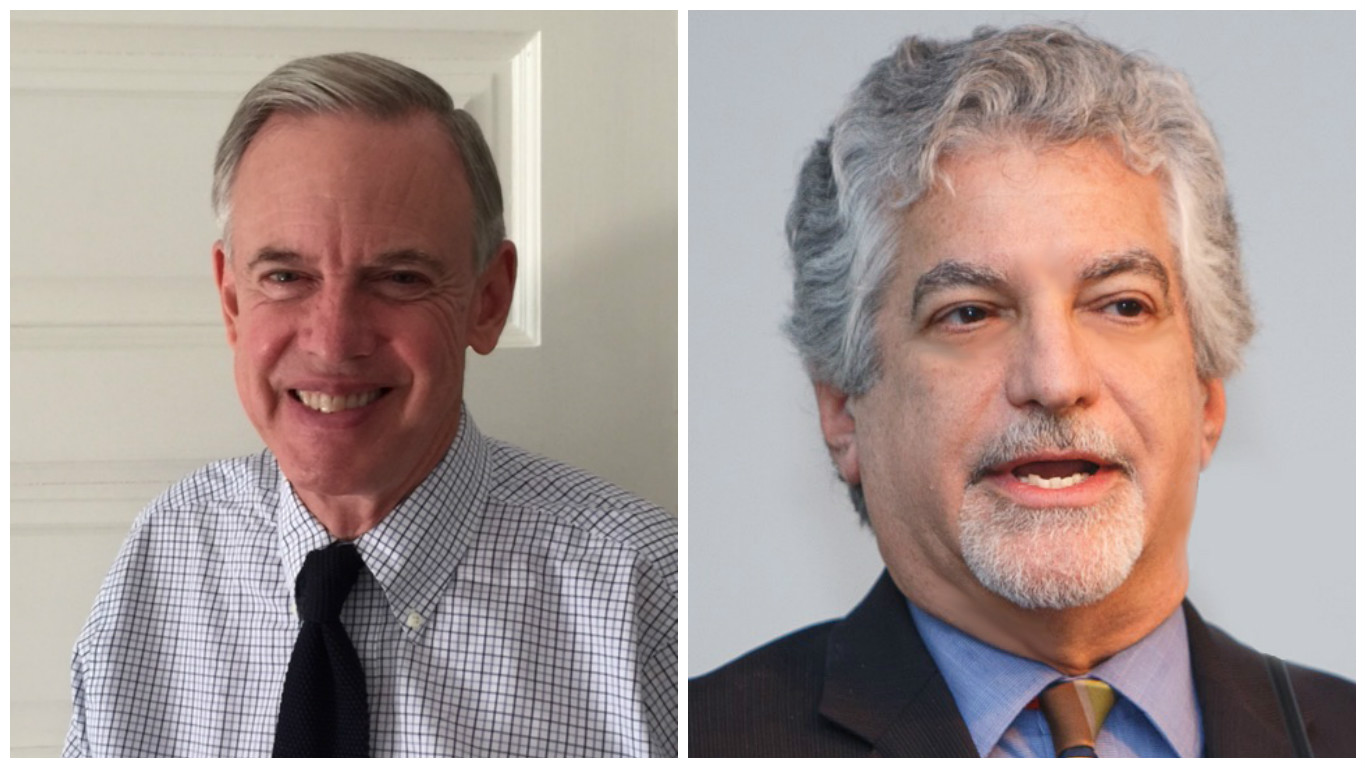 Attorney John Smith, a retired Reed Smith partner, and Alan Greenberger, a Deputy Mayor and Director of Commerce under Mayor Nutter, will spill the beans at the Wayne Art Center this Thursday, Jan. 19 at 7 p.m., part of the HomeGrown lecture series.

Smith and Greenburger also talk about how our new global honor might boost tourism and commerce both in Center City and out here on the Main Line. Tickets are $20 in advance; $25 at the door. Order online or call 610-688-3553.