A rendering of the Reception Room at Terrain Gardens at Devon Yard.

Slipped into URBN’s final plans for its new “lifestyle center,” the event venue turns out to be a pretty big deal. 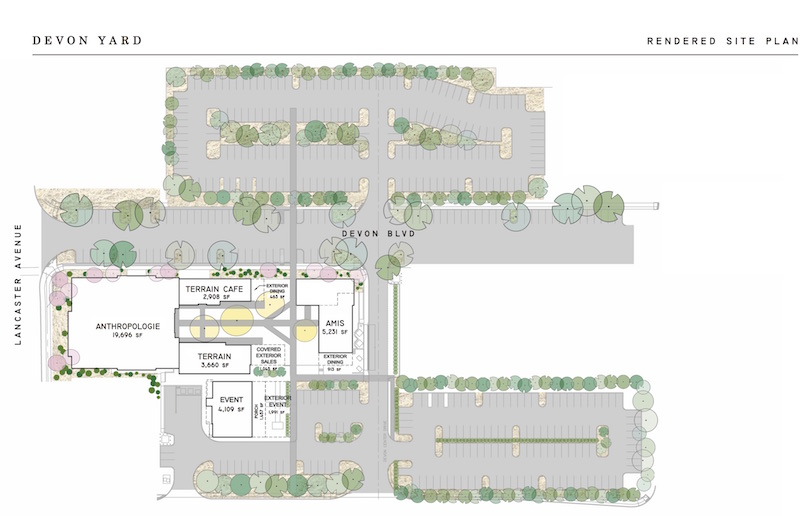 The latest site plan for Devon Yard, updated this week.

“It’s creatively tucked into its own little world,” says Ziel, who calls the space a “unique and intimate” alternative to the usual Main Line wedding haunts, i.e. country clubs and tented estates.

The venue has four distinct spaces: an indoor Reception Room, an adjoining weather-protected Garden Porch, an enclosed Ceremony Garden and a Bridal Suite.

A rendering of the Ceremony Garden (above) and adjoining Garden Porch (below).

The game plan: make the place so dazzlingly cool that brides forget they’re getting married in a suburban shopping center.

In other Devon Yard news: Pizzeria Vetri has been scrapped. The extra space is going to Amis Trattoria, now clocking in at 5,200 sq. ft. with seats for 140 inside and another 60 alfresco. An upscale-casual Roman-style restaurant like its Philly cousin, Amis’ will handle private parties for up to 80. (Can you say “rehearsal dinner?”) Ziel says the Trattoria will launch primarily as a dinner house, with Friday lunch and weekend brunch.

Devon Yard’s only other eatery, Terrain Garden Café, plans brunch and lunch daily and dinner Thursdays through Sundays. Cozier than Amis, the Café will seat 90 indoors, another 30 on the patio, and can also be rented for private parties.

So theoretically, harried brides could keep all their affairs in the Devon Yard family – from shower and rehearsal dinner through farewell brunch.

There are still WAY too many empty buildings on Lancaster Ave. of late. But we’re pleased to report that the home of the world’s first Anthropologie won’t be joining them. 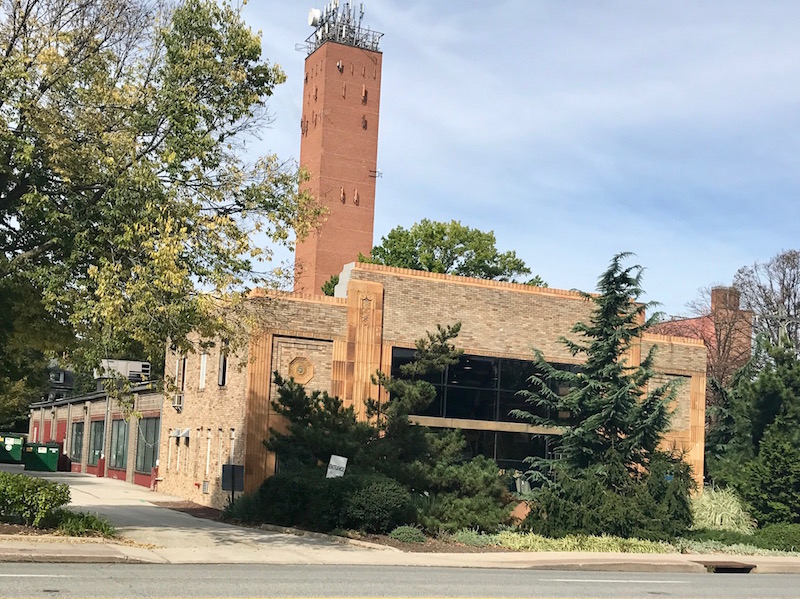 URBN so loves the cool Art Deco Anthro building that it’s holding onto it – even after the store heads west to Devon Yard next year.

The company has extended its lease at 201 W. Lancaster, but won’t say yet which brand will take over the former car shop. The contenders: Urban Outfitters, Free People, BHLDN, a Vetri Family restaurant, or some combination thereof.

EGG to nest in Bryn Mawr

The hip children’s clothier EGG is about to hatch in bustling Bryn Mawr Village.

Clothes are frill-free and modern, cute but not cutesy, and made from durable, washable and organic (Goop approved!) cottons.

Target it’s not, but we hear prices won’t kill you. 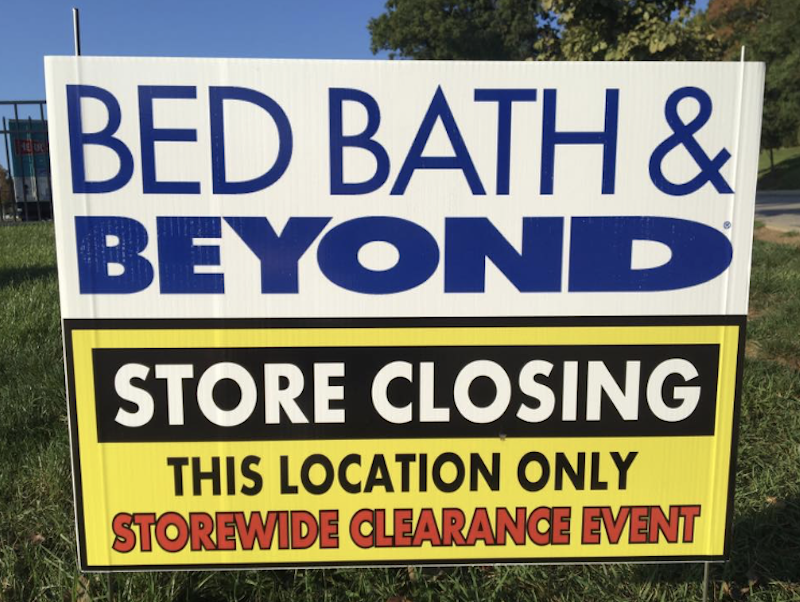 Grab your stash of $5 off coupons and hustle on over to the liquidation sale at Bed Bath & Beyond at St. David’s Square.

The company’s not renewing its lease and the store will be gone by November.

According to the chain’s spokesperson, stores in Wynnewood, King of Prussia and Plymouth Meeting are staying put.

Since the sale sign went up last week, Radnor’s been bonkers, with lines snaking through the aisles, a manager tells us.

BB & B is the second largest tenant at St. David’s Square, which was built in 1992 after the venerable department store, B. Altman, was bulldozed. (Only the Giant supermarket is bigger.)

No word yet on what’s coming. The Square’s leasing agent, Josh Birns at Olshan Properties, tells us he’s been talking to “several interested retailers.” 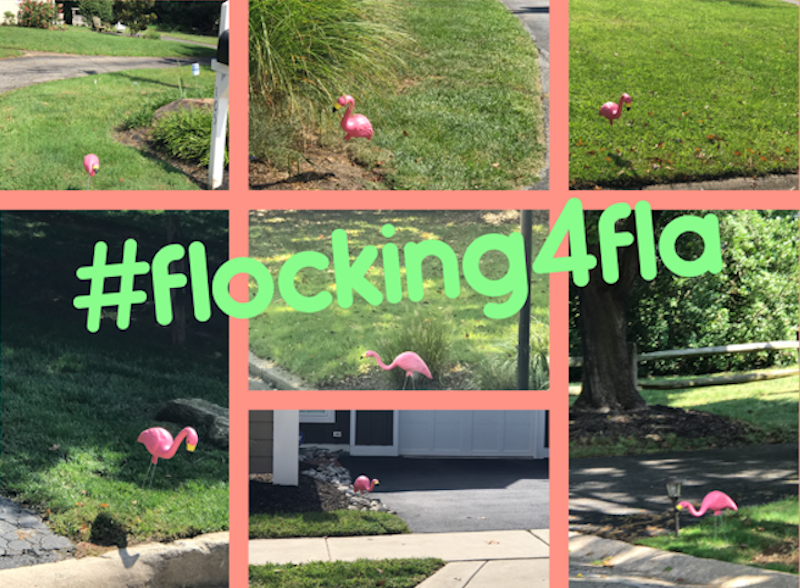 What’s with all those pink flamingos popping up on Devon’s meticulously manicured lawns?

The brains behind the birds is former Floridian April Tellam Timmerman who wanted to do something to help Sunshine State folks pick up the pieces post-Irma. About a week or so ago, she launched a gofundme campaign and alerted her Devon neighbors. Donate $25 or more to the Community Foundation of the Florida Keys’ hurricane relief work and, voila, April or one of her minions (Chase, 8, Henry, 6,) will drop a flamingo at your door.

In just seven days, #Flocking4Fla surpassed its $10K goal, with lots of local yards in the pink. 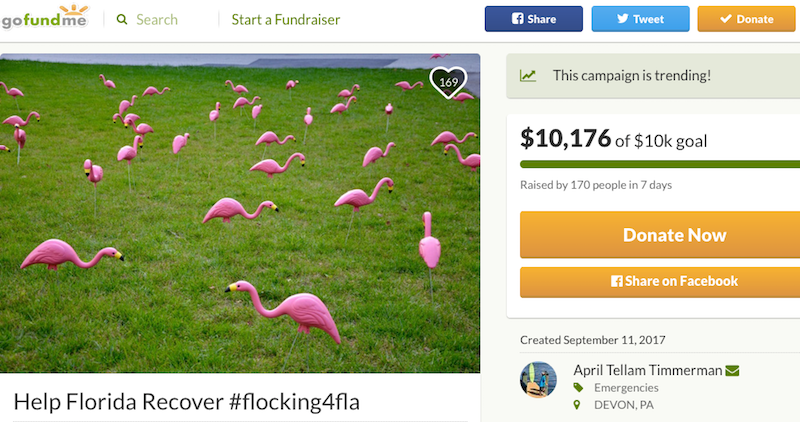 After all the bickering over the Waterloo site, we’re just happy to see a lawn message that everyone can agree on in Devon. 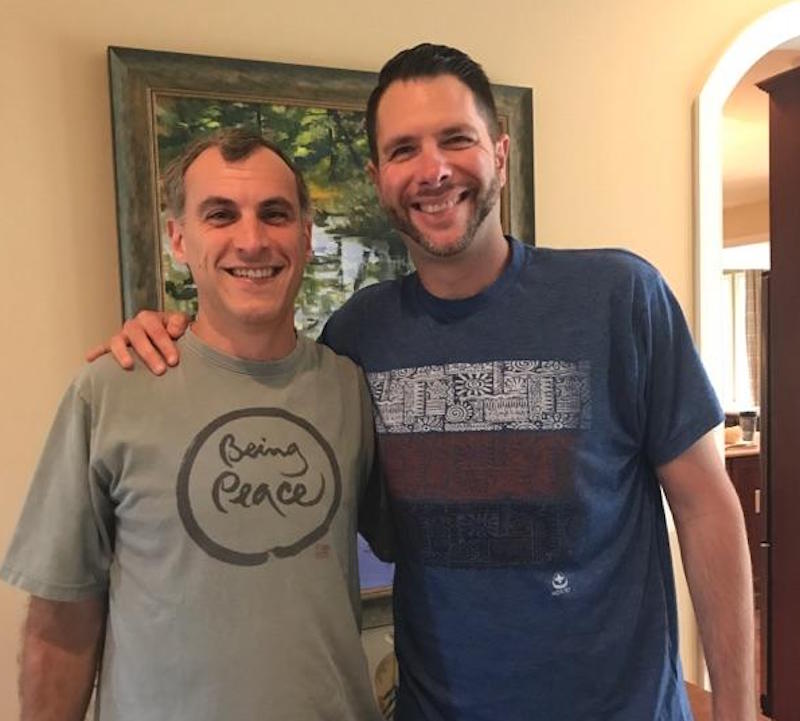 Marc Balcer and Josh Gansky, founders of the Center For Self-Care for men.

But men? Not so much.

On the center’s fall schedule: Mindful Dads meetings, Men Sitting by a Fire pow-wows, a Bravery and Courage weekend retreat, and more.

BTW, the Gansky name might ring a bell for local parents. A guidance counselor at Stoga until 2009, Josh is now a counselor at Welsh Valley Middle School in Narberth.

Save a girl from sex trafficking: Walk Her Home 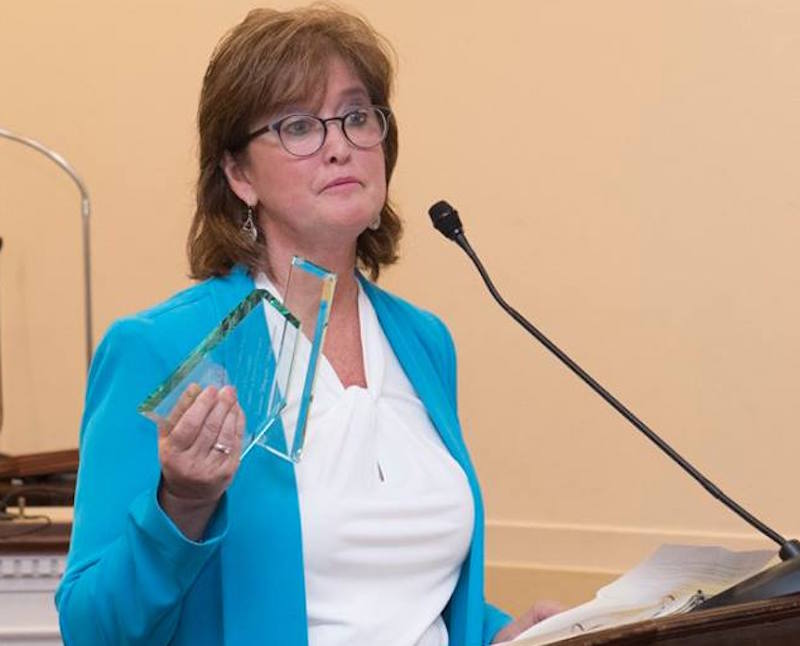 Here at SAVVY, we’re always fascinated by the human stories behind nonprofits, the reason someone drops everything to champion a certain cause.

Among the most remarkable backstories we’ve heard is the one behind Walk Her Home, a new nonprofit that helps victims of human trafficking and sexual exploitation.

Its founder, Chesco resident Susan Ingram Weidemann, wasn’t a victim of sex trafficking, but she sure was sexually exploited – in a rather shocking way.

In May of 2015, Susan was molested by her massage therapist at the Massage Envy in West Goshen. It was her seventh massage with James Dieter, then 63, a man she’d come to trust. “A sweet, kind man who turned evil in the dark in a moment,” Susan recalls. After she reported the assault to police, 11 more women came forward, putting Dieter behind bars for up to 13 years.

The trauma changed Susan’s life, propelling her to a new calling: to advocate for sex-trafficked girls, a cause she’d studied for her church and long cared about. “God wanted me to know what being a victim felt like,” she says.

Sex trafficking is happening everywhere, Susan says, including right under our noses on the Main Line.

Case in point: the Devon Square massage parlor that police raided last year, which Susan calls the kind of “rub and tug” place where male clients knew to ask for “a happy ending.”

Susan says sex slavery often begins online when an insecure young teen visits a social site or phone app (like Whisper) and is wooed by a predator posing as someone her age. “A trafficker can lure a girl to meet him in 24 hours – at the park, at the mall. He says everything a vulnerable girl needs to hear.”

Girls are often drugged, then turned into addicts and forced to turn tricks in no-tell motel rooms and shady massage parlors, she says.

Trafficking is lucrative, too. Susan says an enslaved girl can be sold some 30 times a day, bringing in six figures a year.

Susan’s crusade has already taken her to DC, where she received a Congressional award for her work last April. 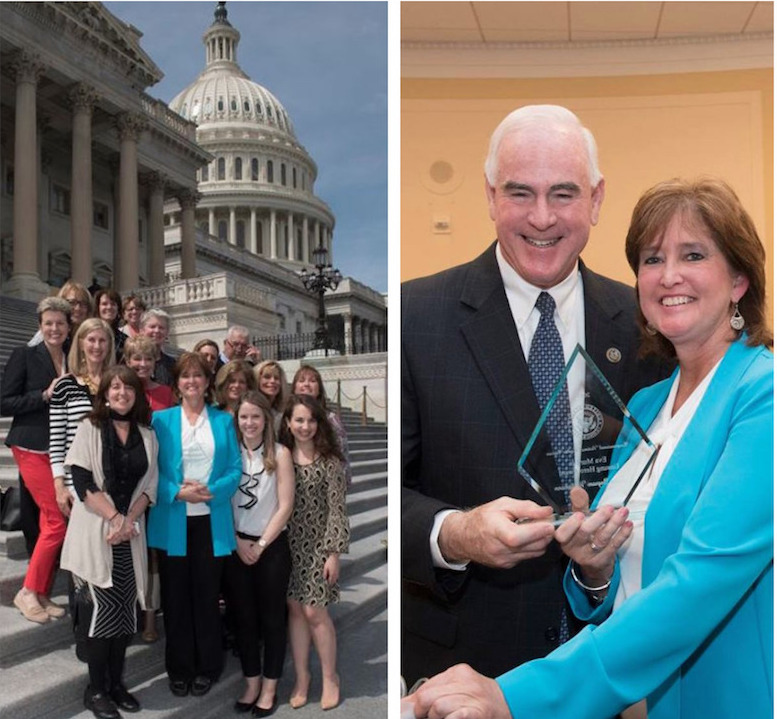 Susan celebrates with Congressman Pat Meehan and friends in DC after she received the Eva Murillo Unsung Hero Award, given to someone who’s suffered a personal tragedy and goes on to help others. Susan has also collaborated with Meehan on a bill that would require spas to report allegations of sexual assault to police.

Walk Her Home aims to spread awareness, rescue victims and restore survivors. It raises money for organizations that get girls off the streets and into supportive, safe housing. Eventually, Walk Her Home hopes to create a National Alliance of Safe Houses, to ensure quality and spur collaboration and corporate funding.

Walk Her Home will hold its first event, a 5K walk, Kids Fun Run and Fall Festival on Oct. 7 at the Westtown School. Proceeds will support two local safe houses and the filming of From Liberty to Captivity, a documentary about sex trafficking in PA. Click here for more info or to register.

Seltzer’s the unlikely guy behind this weekend’s Philly Music Fest, a first-time event at World Café Live in support of our town’s exploding music scene.

Oh, and about a billion sponsors. Which means all those sometimes starving artists will actually get paid to perform. Nice.

Also nice: The Fest’s a nonprofit; proceeds will go to local charities.

The Tredyffrin Historical Preservation Trust has rounded up its usual batch of swell homes to traipse through this Saturday, Sept. 23. Tickets to the 13th Annual Historic House Tour are $35 and include a free ticket to the Oct. 7-8 Main Line Antiques Show. The Tour supports the new Living History Center at Duportail, including the reconstruction of one of its key features, the Jones Log Barn in Chesterbrook.

Wayne’s Autograph Brasserie is launching themed Girls Nights Out on Wednesdays. There’s a new bar menu ($5 -$10 plates) and drinks stay discounted until 9:30. Yippee! Autograph GNOs on tap this fall include:

Save the date for our first SAVVY event

Exciting news! Team SAVVY is planning its very first SAVVY Gathering (!) – and you, dear reader, are most cordially invited.

Bring only your appetite – and your thirst for cutting-edge knowledge.

Details TBA but count on cold-pressed cocktails, healthy bites and eye-opening conversation (with our smarty-pants panel).

Our topic: “What to Eat NOW! Filling your plate to look and feel fabulous.”

If you’re a SAVVY e-mail subscriber, look for our invite to hit your inbox.

If you read us on Facebook but don’t subscribe: What are you waiting for? Subscribe today (it’s free) and you’ll get first dibs on this event. Space is limited:-)