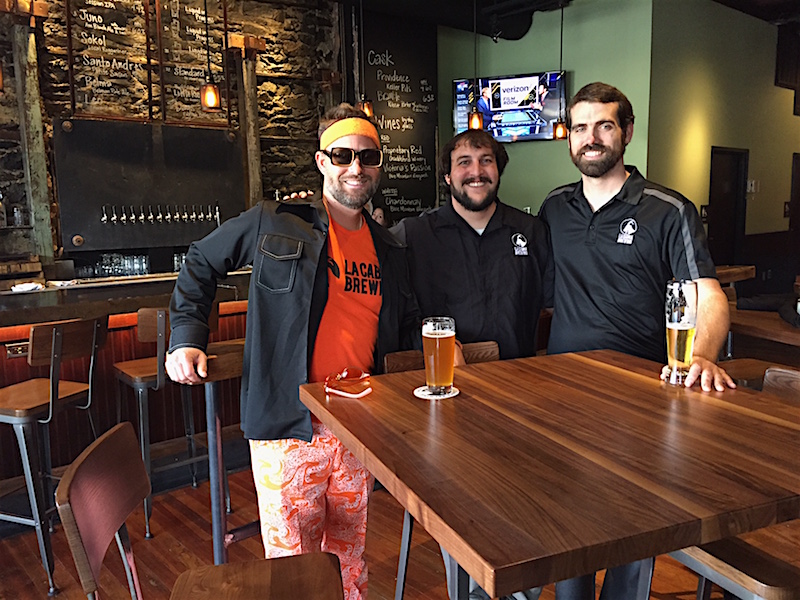 Renovations took a year. And with the top-floor only half-furnished, it’s still a work in progress.

But with hordes of thirsty crowds right out of the gate, La Cabra smells like a winner. 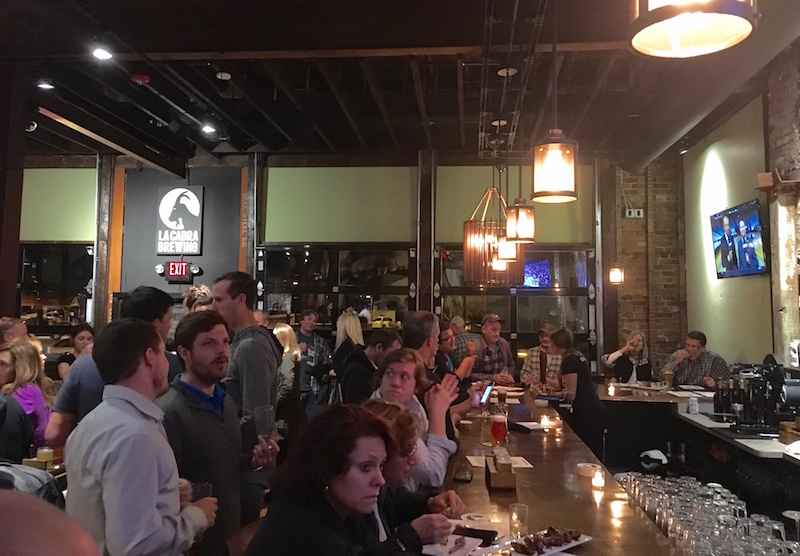 La Cabra (“the goat”) opened with eight house-brewed beers and two hard ciders on tap, along with a couple local wines. (No highballs here; cocktails are verboten under La Cabra’s PA brewpub license.)

Despite its diverse drafts and Latin-leaning food, ownership of La Cabra is local all the way. 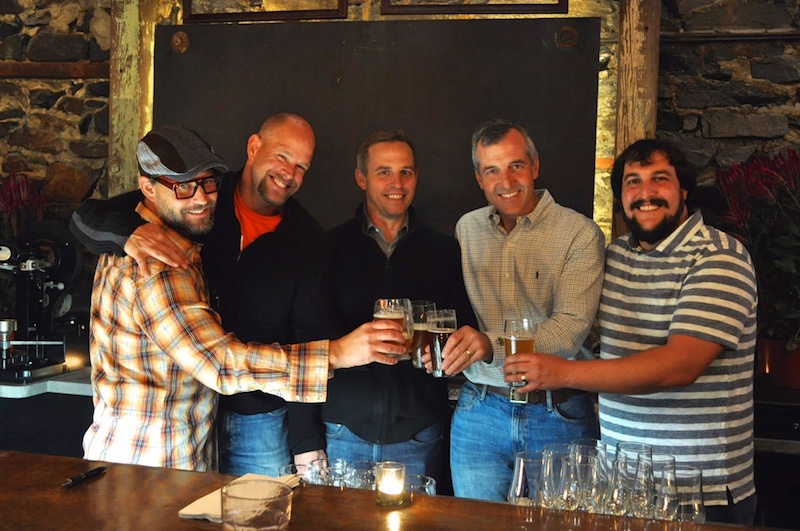 A longtime garage brewer with a passion for barrel-aged sours, Popernack once taught English and Spanish – he has a master’s in English from Villanova. “These days, I’m most fluent in beer,” he says.

The partners scouted 27 locations from Wayne to Frazer before circling back to buy the first building they saw.

It was in tough shape.

Dating from the late 1800s, it was Berwyn Village’s general store before becoming a succession of furniture stores beginning in the 1950s.

Layers of carpeting, drywall and drop ceilings were pealed away to reveal original wood floors, sturdy stone walls, and beamed ceilings – the kind of character you can’t buy. 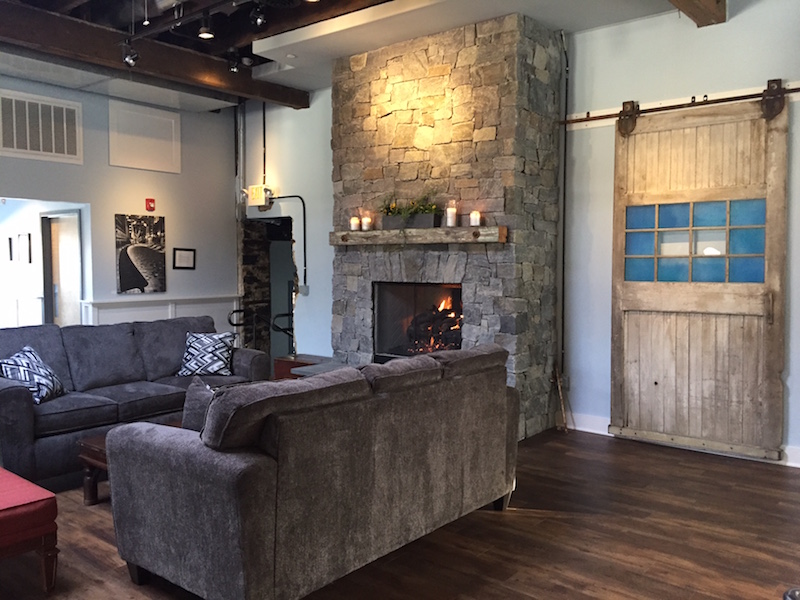 Upstairs at La Cabra will eventually function as a social club with a fireplace, couches, a second bar, games and a stage for live music. Owners also hope to add extra dining space, including a communal table and a private room for beer education classes and parties.

Good neighbors, the partners bought timber and supplies across the street at Fritz Lumber. They also re-purposed and salvaged what they could.

The resulting vibe is industrial chic, still mighty cozy. A place that’s brand new but feels like it’s been around forever.

Meanwhile, three new eateries are humming away at the nearby King of Prussia Town Center.

Add to the list the fast-casual honeygrow, now occupying the big silo across from Wegmans.

It’ll be interesting to see if lunchtime lines snake out the door like they do in Philly. 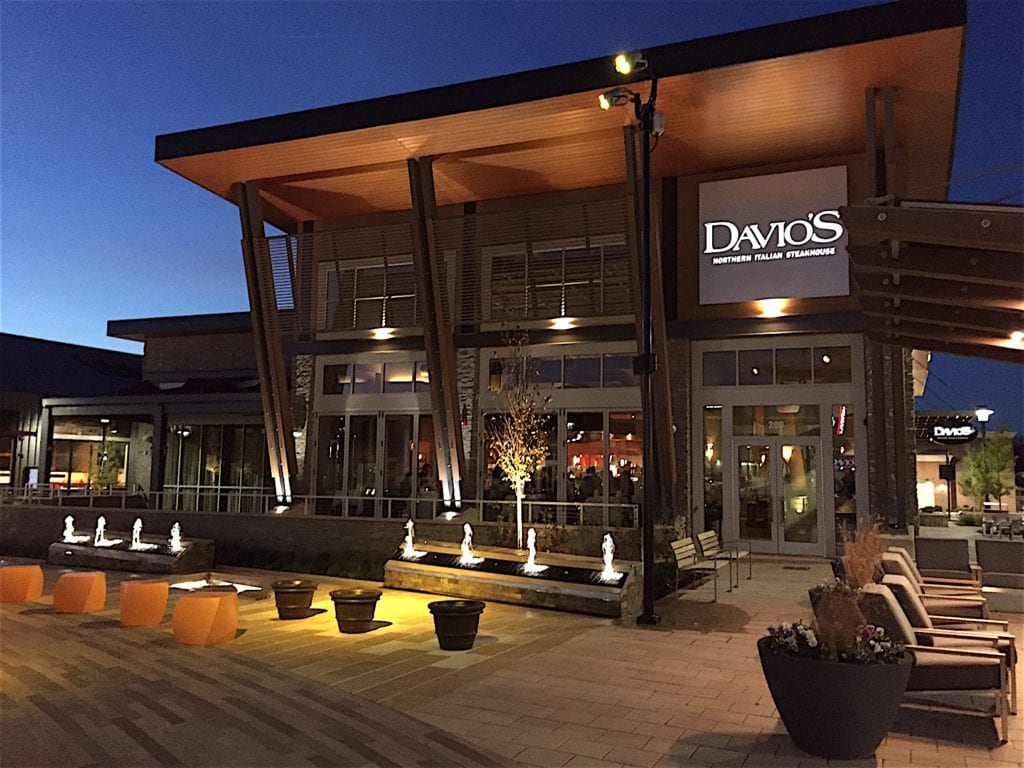 Yup, another steakhouse in King of Prussia.

Not that they’re slinging pedestrian parm here; far from it.

This is high-end, fine dining with prices to match. At lunch, figure $9-$26 for salads (depending on your protein) and $15 – $29 for entrees. Your dinner bill will add up even quicker.

(The cheapest way to dine at Davio’s? At the bar – where burgers and pizza can be had for under $20.)

Most of what we tasted from the dinner menu was quite good but, alas, not out of this world.

Still, as prices soar, so do expectations, right?

The place – all 10,000 sq. ft. of it – is a study in creamy elegance with vaulted ceilings, grand columns, clothed tables and waiters in chef coats. 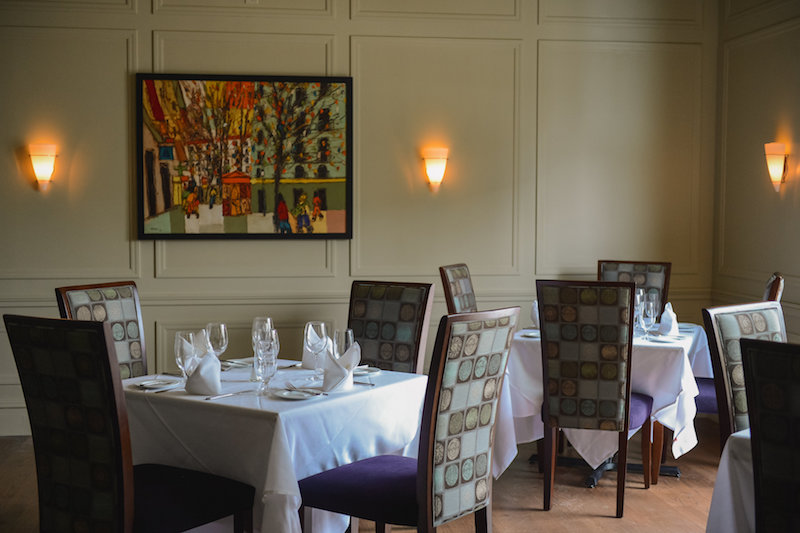 The bar is inviting and the two private dining rooms look swell.

But for our money, the best seats in the house may be at the “chef’s table” row facing the bustling open kitchen.

We reserve the right to change our minds, though, when the heated outdoor patio with seats for 75 opens in spring.

What we like about Paladar: the nifty, indoor/outdoor see-through bar, the range of prices (most entrées are in the teens) and the flavorful Latin-inspired food.

What we’re meh about: the mishmash décor and those treacherously slippery wood floors. (Hope they’ve fixed them by now.) 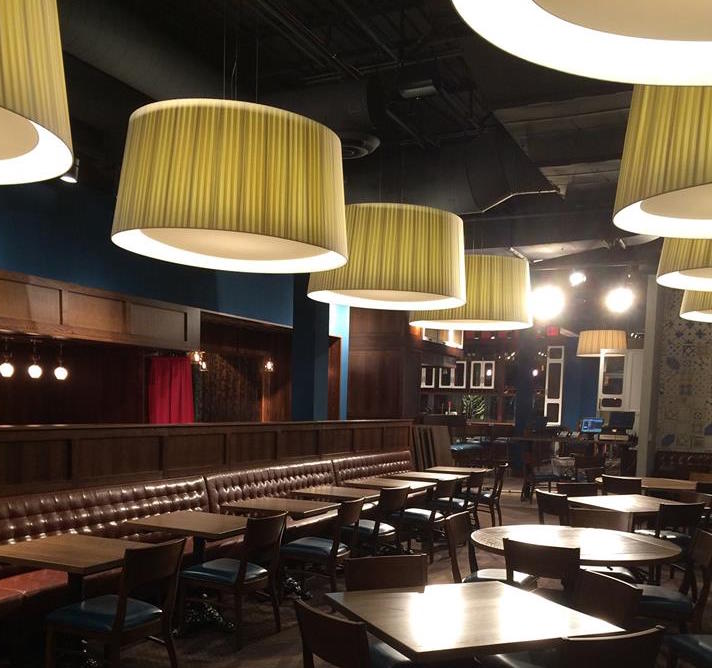 Other signatures: craft-your-own guacamole, hand-muddled mojitos, and some 75-rums, many of them aged.

And just cause we know you’re curious: paladar is Spanish for palate.

Hard to say which school district has had it worse:  Tredyffrin/Easttown last year or Lower Merion this year. While all’s relatively quiet on the western front in T/E, it’s been rough riding down east.

The Lower Merion School District has been so overwhelmed by lawsuits and challenges from two guys – Gladwyne attorney Arthur Wolk and Rosemont crusader Stephen Gleason – that it just hired an outside PR firm to help with damage control.

In case you haven’t heard, the two successfully sued Lower Merion schools, claiming the school board’s been unnecessarily raising taxes to cover alleged budget shortfalls when it’s actually had millions stashed away. In a September shocker, a judge ordered the district to rescind its tax hike for the current school year and cut it nearly in half – an order that’s been put on ice while the district appeals.

But Wolk and Gleason aren’t finished.

Wolk’s now saying he may sue the law firm that he says overcharged the district for its defense against the case he brought. Hmmm.

He’s also railing against LM’s plans to pay $170/hour for PR – services the district says it needs to – you guessed it – handle the lawsuit he brought.

Oh, and he’s ticked off that the district spent $47,000 on sushi for students last year.

That charge, at least, seems easily debunked. LMSD’s spokesman says students pay for their lunches with no taxpayer subsidies. And Sushi Thursdays are actually a big moneymaker for the district – the cafeteria’s most profitable offering, in fact.

Meanwhile, the school board’s president sounds fed up. “We are inundated regularly by Wolk and Gleason,” Robin Vann Lynch told the Inquirer, saying the lawsuit is hogging administrators’ time. “We feel obliged to provide the community with the full story.”

Stay tuned. A hearing on the district’s appeal of the tax ruling is set for next month.

All things URBN have invaded the far end of the King of Prussia Mall, including two possible previews of what’s coming to Devon Yard. 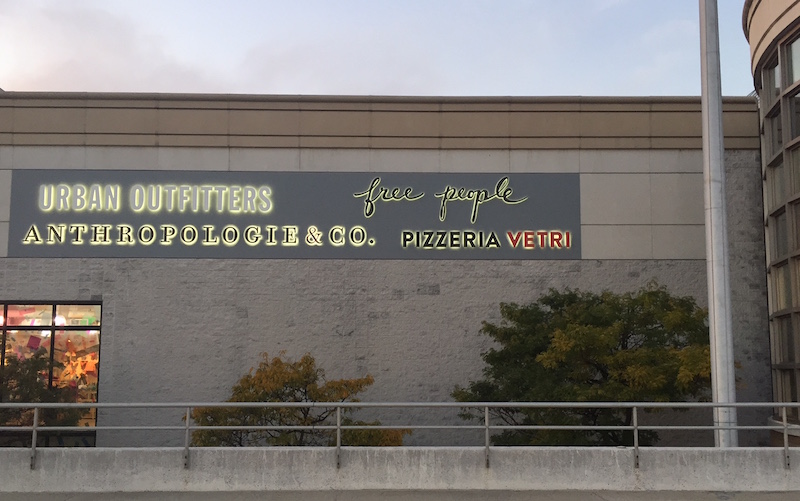 The new Anthropologie & Co. is mammoth.

Yup, the KOP Anthro (a boot and bag bar! a beauty boutique! furniture!) is so bright and airy, it makes its Wayne cousin seem quaint by comparison. 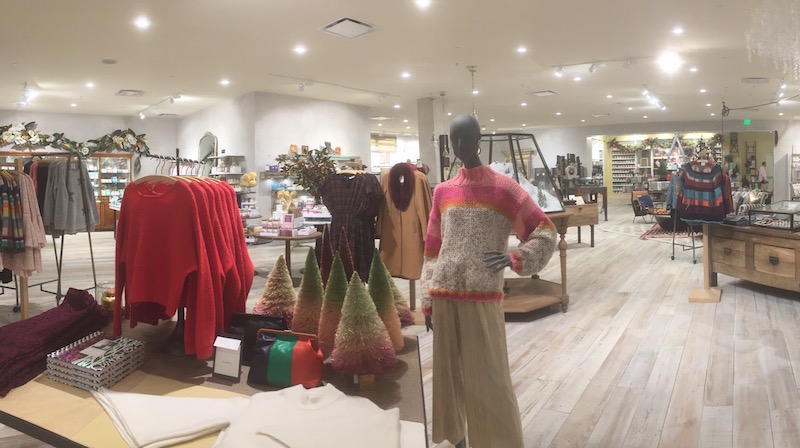 But Anthro’s just store one.

Next to it is the largest Free People on the planet. (Seriously. It’s the boho brand’s biggest store to date.)

And across the way sits hipster headquarters, aka Urban Outfitters, also newly expanded.

So theoretically, grandmoms, moms and teens can split up to shop at their fave URBN store, then meet in the middle to munch at the new Pizzeria Vetri. 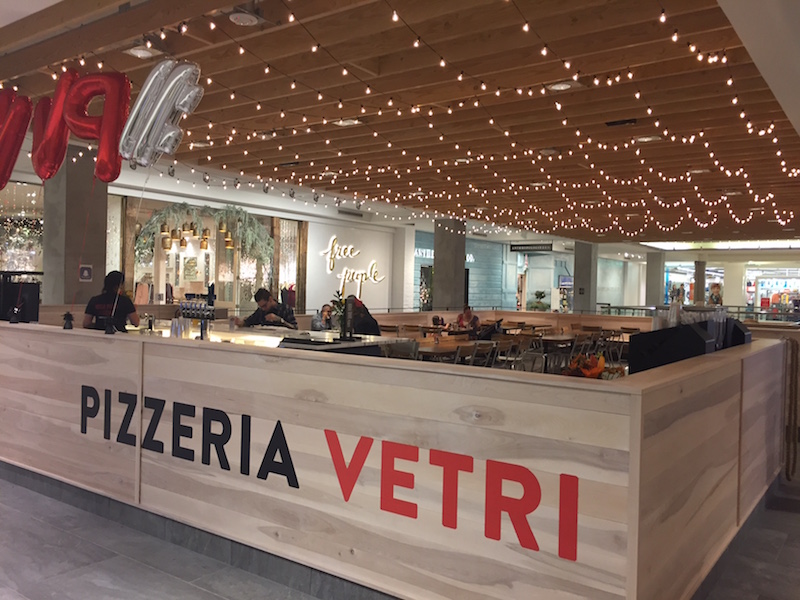 Also owned by URBN, the KOP Vetri is the first rollout of its quick-serve “square pie” mall model.

Where Vetri pizzas have heretofore been slim and round, it’s hip to be square in KOP.

Ordered at a counter, generously cut square slices are $5 – $8 (much cheaper than Vetri’s personal pies in Center City); half-trays for the gang are $16 – $32.

For the record, our sausage-and-roasted-pepper square was fab; the three-cheese–and-pepper a bit bland.

Best thing about these squares: their thick-but-still-crunchy crusts.

KOP is Pizzeria Vetri’s first suburban site. Of course, another one – round or square – is headed to Devon Yard.

Long live the indie bookstore! As of last Monday, the Main Line has its second – Narberth Bookshop – and bibliophiles are already singing its praises.

“The community’s support has been nothing short of thrilling,” proprietor Ellen Trachtenburg tells SAVVY. “The best compliment I can possibly receive is that I provide an excellent, eclectic and unexpected selection of books and that’s the feedback I’ve received so far.” 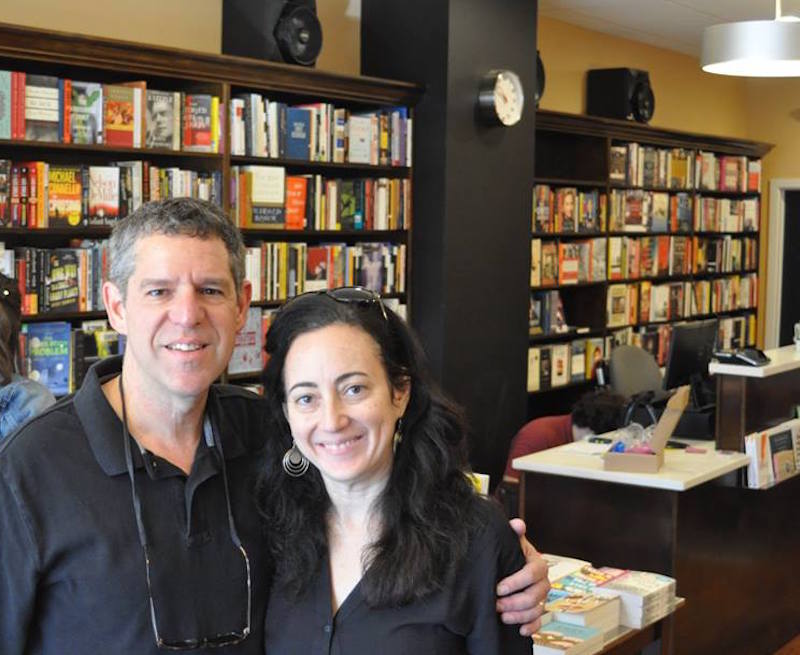 Her top sellers to date: Colson Whitehead’s The Underground Railroad (this year’s One Book, One Lower Merion pick), Ann Patchett’s Commonwealth, Jonathan Safran Foer’s Here I Am, J.D. Vance’s Hillbilly Elegy and “anything about Alexander Hamilton.”

A 26-year publishing industry veteran, Ellen chose Narberth for its walkability and “cohesive community vibe.” (She ought to know; she lived there for 13 years before moving to Bryn Mawr.)

What sets indie bookshops like hers apart from Amazon and Barnes & Noble is “the art of hand selling,” Ellen says. She and her staff are meticulously trained to steer you to titles based on your past favorites, she says.

Besides author events, signings and book clubs, Narberth Bookshop plans to host lecture series on everything from public speaking to climate change – or any topic the “curious, culturally and politically active” people of Narberth might request.

StudioKids Hair Salon and Toy Store on Old Lancaster Rd. in Berwyn is no more. After a 23-year-run, owner Linda Grisafi hung up her scissors and retired.

We know lots of mom and tykes are sorry to see her go.

Hey, shutterbugs. Snap a pic of your favorite place to chill out in Chester County and enter it in the Chesco Planning Commission’s photo contest.

Winning photos also get featured in Landscapes 3, the county’s ongoing update of its master plan for smart growth and saving open space.

Hope to see some of you SAVVY gals on Wednesday, Nov. 9 at “In Fashion,” a fundraiser for the Cancer Support Community of Philadelphia at Neiman Marcus. SAVVY Street Team star Nicole Schaeffer is chairing the festivities and Akris is the guest designer. Reserve your spot ASAP! 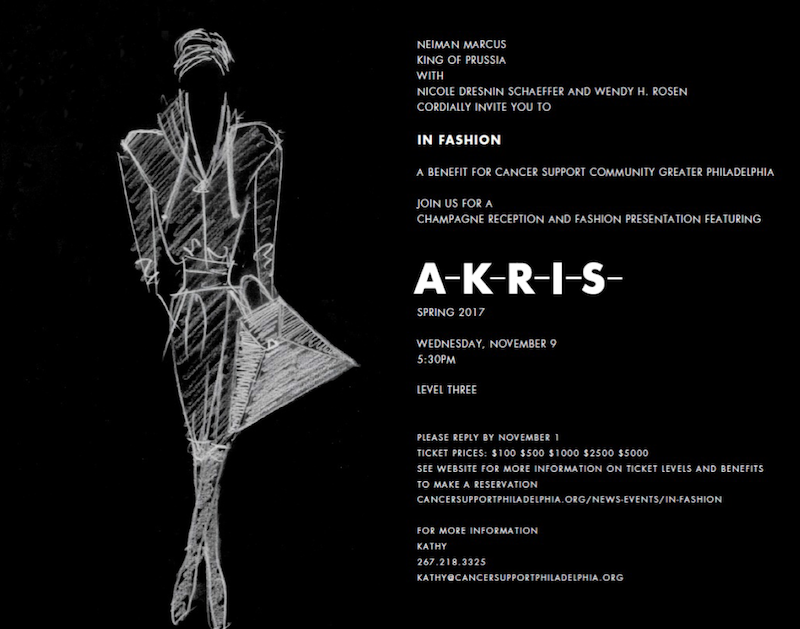 And finally, a sad SAVVY salute to Betsy Bostwick Bartos, who tragically left this world without warning last week at age 57.

Perhaps best known as the Upper Main Line Y’s chipper spin instructor in the bandana doo-rag, Betsy was a ferocious athlete. At one time it wasn’t unusual for her to run 10 or 15 miles, swim a few laps, then head to spin class. She qualified for the Boston Marathon on her very first try. Cycling, scuba, marathons and triathlons, Betsy did it all with grit and grace.

But her gifts weren’t just physical.

A killer cook and baker, she once ran a successful catering business. For many years, she was a caring assistant teacher at Good Samaritan preschool in Paoli.

Above all, Betsy was a devoted mother – she leaves behind four grown children and her adored two-year old granddaughter Nala. Another grandchild is on the way.

Betsy was so special that even her ex-husband paid a tearful tribute to her at her funeral.

Like all of us, Betsy had her challenges in this life. What set her apart was how she handled them – with kindness, patience and that sunny, sunny smile.
The public is invited to “Ride On for Betsy” at the Upper Main Line Y’s spin studio Saturday Nov. 5 from 8 to noon. Ride for as long or as short as you please. Free, first come, first served. Register at the front desk. Doo-rags provided (while they last).