Hey, Whole Foods: How about giving us a new store in Devon, too?

We just had a preview tour of the about-to-open Wynnewood market and, frankly, we were blown away.

The place is blockbuster.

We knew it would be three times bigger than the cramped Whole Foods it’s replacing around the corner.

But we had no idea how much better it would be. 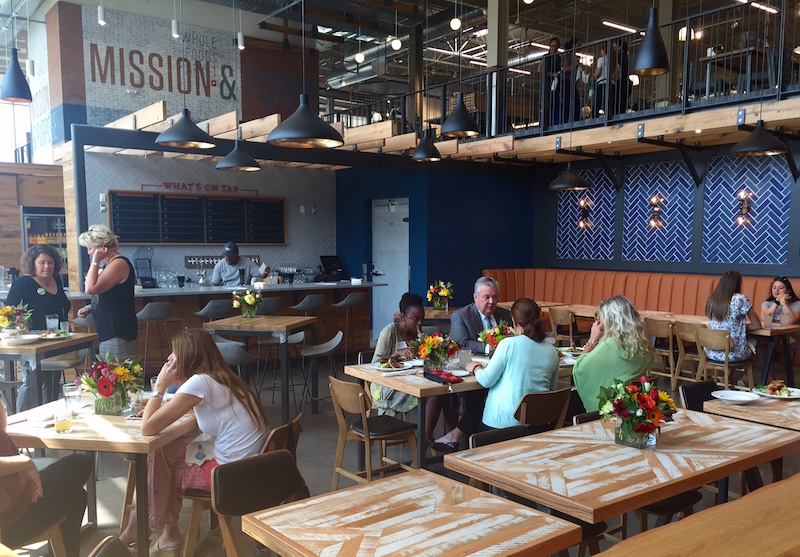 The veggie dishes we tried couldn’t have been tastier: roasted sunchokes, hazelnuts and sage; charred corn with cotija cheese and chili; and watermelon with feta, pine nuts and arugula.

While a friend reported her short rib entrée a tad fatty, the Bucatini Amatriciana was flawless, as was the salmon-topped Grilled Romaine Salad. 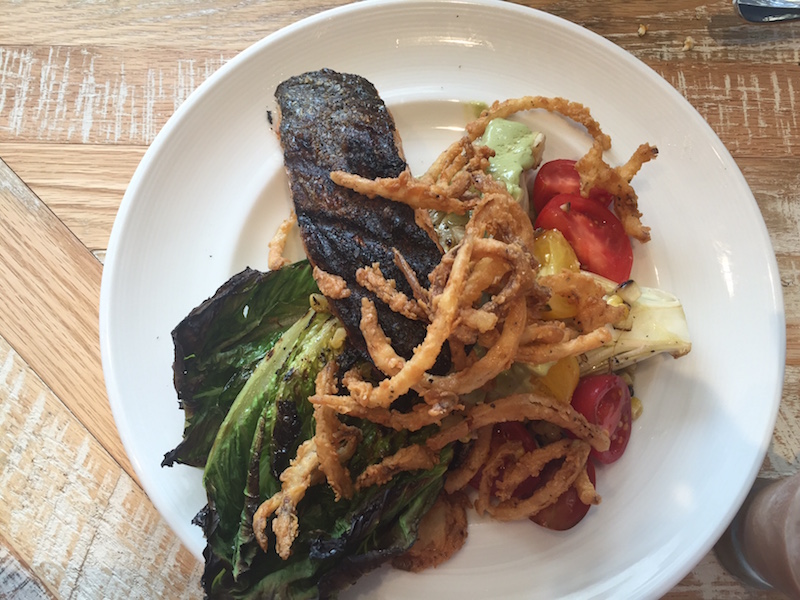 Despite Whole Foods’ “Whole Paycheck” rep, prices aren’t bad, considering you don’t have to tip. Order at a counter in front of the open kitchen; food is delivered to your table.

Wash it all down with a craft cocktail, glass of wine or draft beer (24 beer taps!) from the bar.

And if the food’s too fancy for your wee ones, no worries. Pick them up a slice or sandwich upstairs and bring it on down to the restaurant.

There are plenty of places to take a load off: 51 seats in the sun-splashed Table + Tavern, 44 seats outside plus a row of comfy couches, and another 32 seats in the upstairs café near the prepared food bars.

Not one ounce of food at the current Whole Foods is moving down the street. So look for deep markdowns at the old store before doors close for good Tuesday. Anything not sold gets donated to local food pantries.

Wynnewood Whole Foods Market, 15 E. Wynnewood Rd., will open with its traditional challah bread-breaking ceremony on Wed. Sept. 14 at 8:45 a.m. Table + Tavern will be open until 11 p.m. on weekends and until 10 p.m. Sundays through Thursdays. 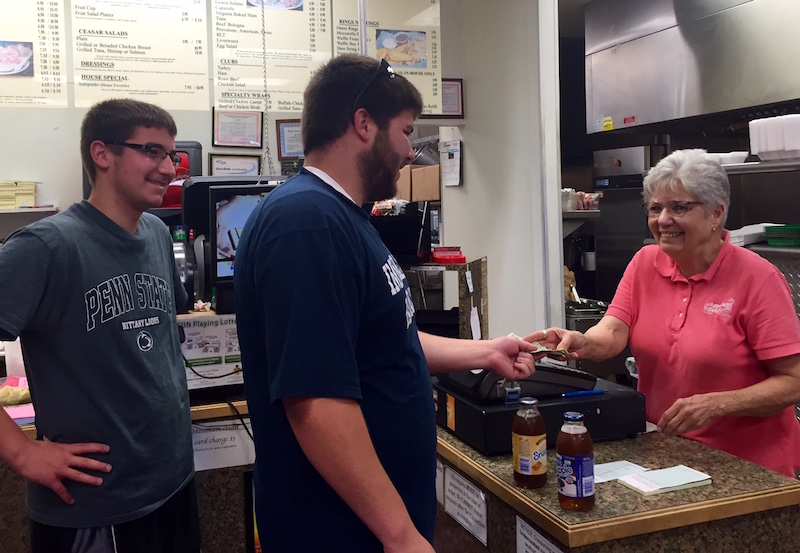 Regulars Jimmy and Josh Pedorenko pay Sonja for their last reuben sandwiches at the Gateway mainstay.

Owner Pren Kqira says he tried to hang on for years as new chains, one by one, arrived at Gateway.

“They’ve been pecking away at me,” Pren tells SAVVY. “Panera took some of my sandwich business. Saladworks took my salads, Five Guys took my burgers.”

When the sandwich shop opened back in the 80s, Gateway had four eateries, he says. Today, it has 13.

The shopping center’s recent overhaul was the beginning of the end. With whole sections of asphalt cordoned off, lunch hour parking, always dicey, became darn near impossible, Pren says.

“I never had a problem with my landlord until construction started. My sales took a dive and never recovered.”

Last winter, Pren thought he’d found a way to squeeze a little more cash out of Appetite’s: he covered the tables with linen cloths and turned a daytime deli into a nighttime BYOB Italian trattoria.

Three months in, “it was doing really well,” he says.

But his landlord, Regency Centers, closed it down, claiming the trattoria violated terms of Appetite’s lease. (Pren insists it did not.)

The two sides couldn’t reach an agreement, and by August, Pren says he’d had enough. With two years left on his lease, he wrote a letter to Regency, informing them he would close Sept. 6.

A monumental step for a guy who’s spent most of his adult life – 27 years – at Appetite’s.

And who doesn’t have a second location to fall back on.

But on Appetite’s last day, as he hugged longtime customers, Pren declared himself at peace with his decision.

“I need a mental break. The community has been very supportive and understanding. They see what’s happening here: the moms and pops are disappearing from Gateway.” 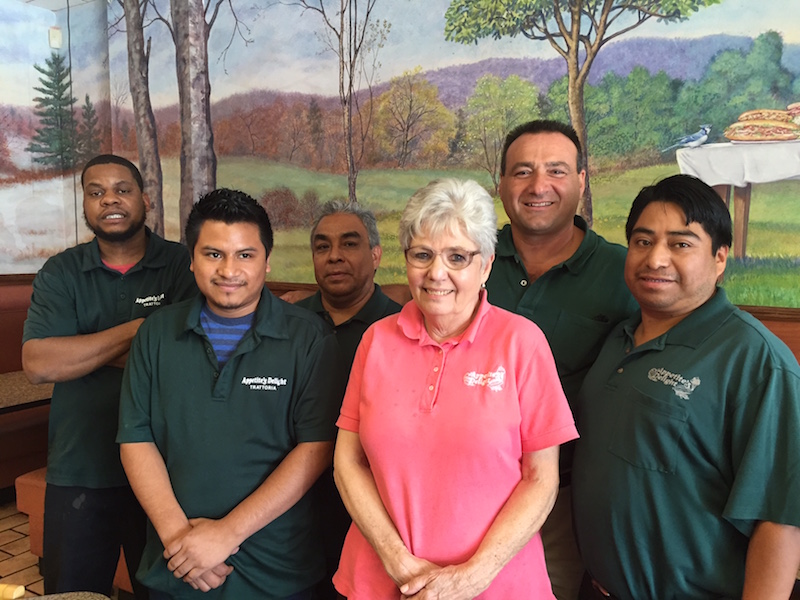 Outback Steakhouse will hightail it to the King of Prussia Mall in March.

“We don’t have any leasing updates or new tenants to announce,” Regency Centers’ leasing agent David Sherin tells SAVVY. He declined comment on Appetite’s closing but did say Chipotle plans to open Sept. 30 in the old Mesa space.

Meanwhile, lunchtime parking woes will continue through the fall. Sherin said the parking lot repaving should be finished “in the coming months” and would be a “significant upgrade” to the center. 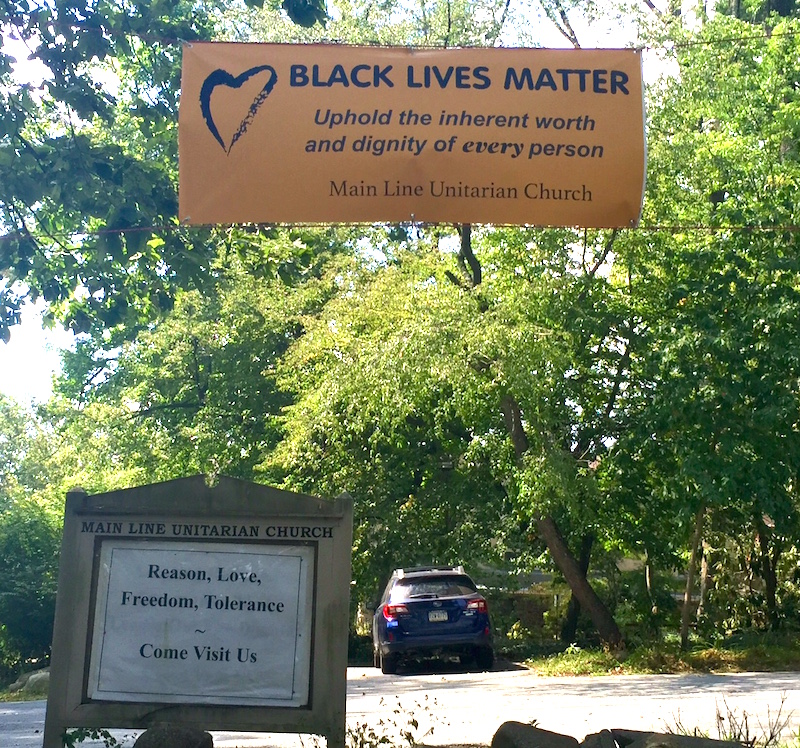 The sign is strung about eight feet off the ground at the corner of S. Valley Forge Rd. and Maplewood Ave.  Hopefully, that’s high enough to avoid the vandalism that repeatedly struck the Black Lives Matter sign outside downtown Wayne’s Central Baptist Church.

The Rev. Neal Jones, pastor of Main Line Unitarian’s mostly white congregation, put the proposed banner to a vote: 92 percent of members reportedly voted in favor of the sign. 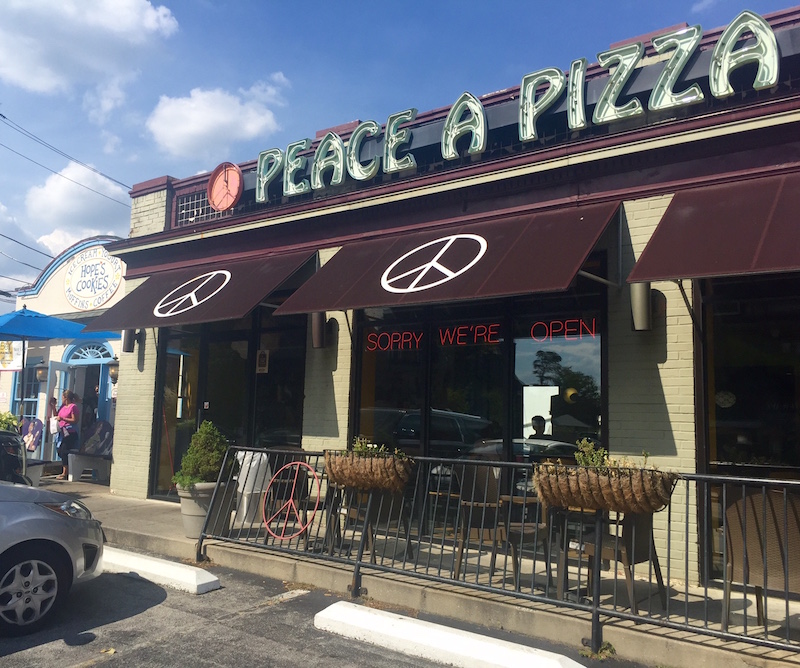 After 18 years in Rosemont, Peace a Pizza will close the week of Sept. 19 and re-open as a Snap Custom Pizza in late October. Same owner, updated concept. Hope’s Cookies stays put.

We’ve been jonesing for authentic shawarma ever since we devoured it almost daily in Israel.

This week we found it.

It may be a chain out of Chicago, but the new Naf Naf Grill across from the King of Prussia Wegmans serves up the real deal: fresh, authentic Middle Eastern fare for the masses.

What Chipotle did for burritos and tacos, Naf Naf hopes to do for shawarma and falafel.

“People are tired of burritos and sub sandwiches,” Naf Naf CEO David Sloan told SAVVY on opening day at the KOP Town Center. “They want a different flavor profile. We want to give a quality Middle Eastern experience to the average American.” 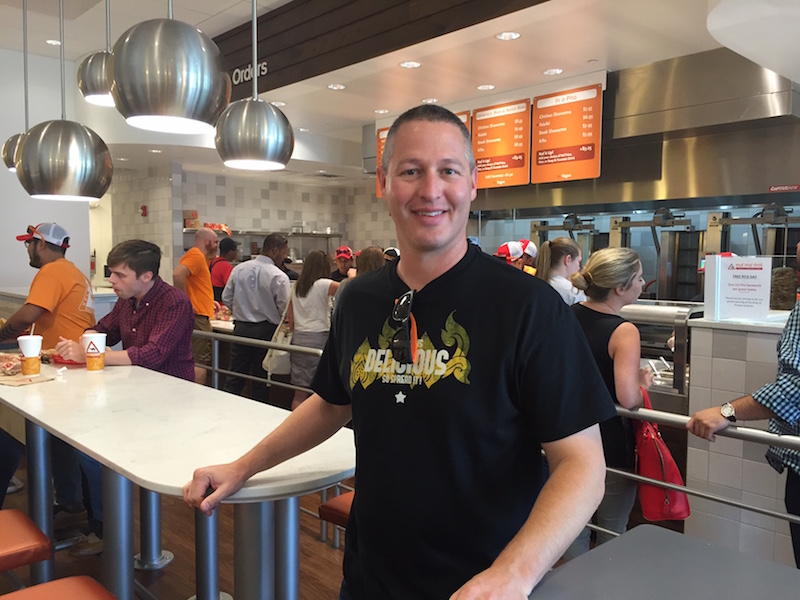 CEO David Sloan at the just-opened Naf Naf Grill in the new King of Prussia Town Center. With an open kitchen and bakery and meat roasted and cut before your eyes, there are “no surprises,” he says.

For the uninitiated, shawarma is slow-roasted meat shaved from a circular, vertical spit and embellished with salads, hummus and sauces.

At Naf Naf, chicken or steak shawarma (or falafel) comes in either a fresh-baked pita ($7.55-$7.95) or, for about a buck more, a hummus, salad, basmati rice or couscous bowl.

Like many fast-casual joints, you walk along an assembly line, customizing with toppings as you go.

For the record, the chicken shawarma jazzed up with hummus, baba ghanoush, tahini, purple cabbage and chopped salad was killer.

The place is off to a roaring start. About 500 folks showed up for Naf Naf’s customary kickoff Tuesday – a free pita lunch. And business has been steady ever since.

KOP is Naf Naf’s 21st location, its first in PA and the first of five coming to the Philly area, including one slated for the new shopping center planned near the Rt. 29/PA Turnpike exchange in Malvern.

Naf Naf Grill is open 11 a.m. to 10 p.m. in the King of Prussia Town Center across from Wegmans. Catering and online ordering available.

Tis the season for fall festivals:

Although they never met, Jeff Quinn and Jim Klinges shared much: summer of ’94 birthdays, homes a few miles from each other, and hard-fought battles – that each thought he had won – with an insidious foe.

Jeff Quinn of Paoli was diagnosed last February, during his junior year at Penn State.

An acolyte in his church, an honor student, and standout sprinter for Great Valley High School (Class of ’13), Jeff powered through seven months of chemo and was declared cancer-free. He was pumped to return to the Happy Valley in January. 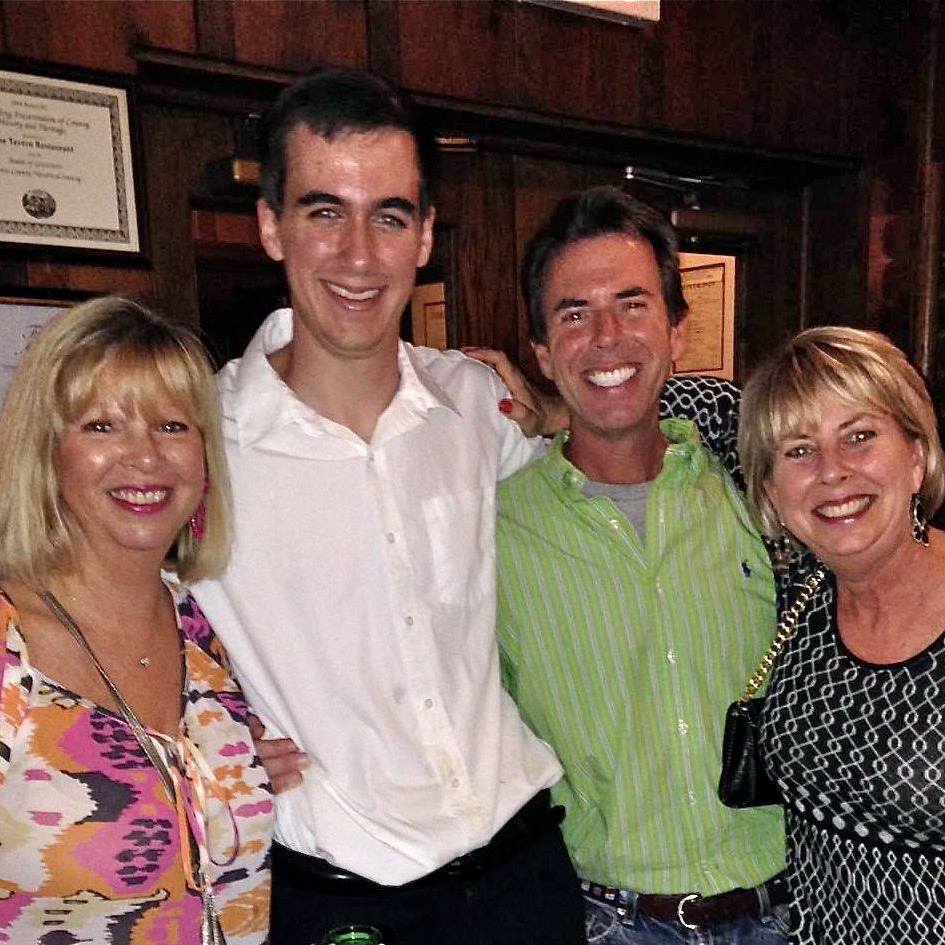 The late Jeff Quinn with his aunt, Mona Kirby, his uncle, Keith Kennedy, and his mom, Jill, at The Tavern in State College.

But with just three weeks of treatments left, he was struck by an out-of-left-field, rare complication to a chemo drug. And on August 25, after 32 family members had gathered in prayer at his Paoli Hospital bedside, he passed.

“Jeff never, ever complained; he never asked ‘Why me?”’ recalls his devastated aunt Mona Kirby, whose son, brother and husband all eulogized Jeff at his packed funeral at St. Francis in the Fields in Malvern.

“I was and always will be inspired by the quiet sense of strength, dignity, and optimism Jeff displayed in the face of his adversity,” his uncle Brian Kirby wrote on Facebook. 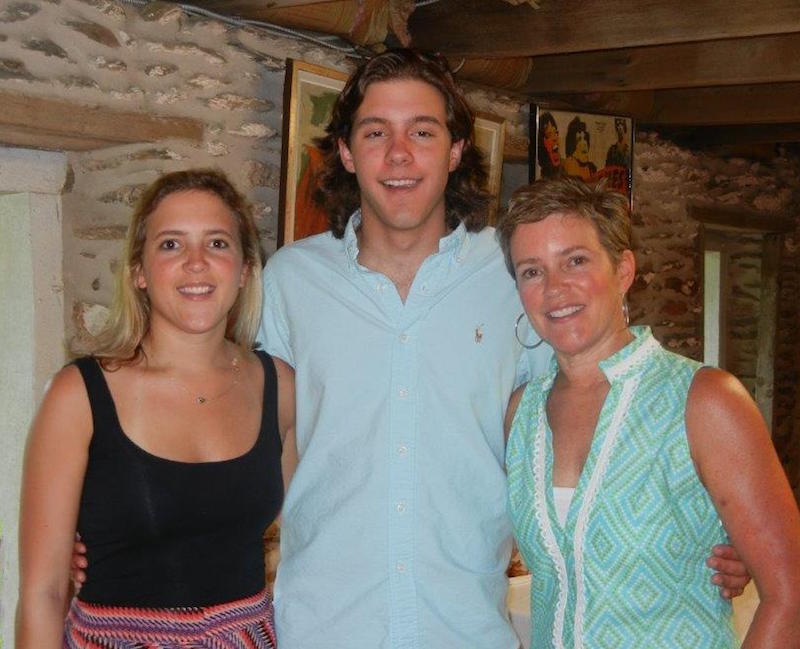 The late Jim Klinges with sister Krissy and mom Denise at his high school graduation party.

Like Jeff, Jim thought he had it beat. His big sister, Danielle, had donated her bone marrow last December and his spring scans were clear. But the disease returned with a vengeance in mid-summer.

At Malvern, Jim ran track and coached soccer. He could only attend St. Joe’s for a year but became a fierce Hawks hoops fan. (You may recall how Coach Martelli and two star players took time out from March Madness to surprise Jim with supportive phone calls.)

A guy’s guy, Jim was also nuts for fantasy football, wing nights at P.J. Whelihans and his wide circle of pals, who nicknamed him “Legend” during his gritty cancer fight.

Family friend Maria Delany remembers Jim as humble and polite, with a dry sense of humor, if a tad shy around the ladies. 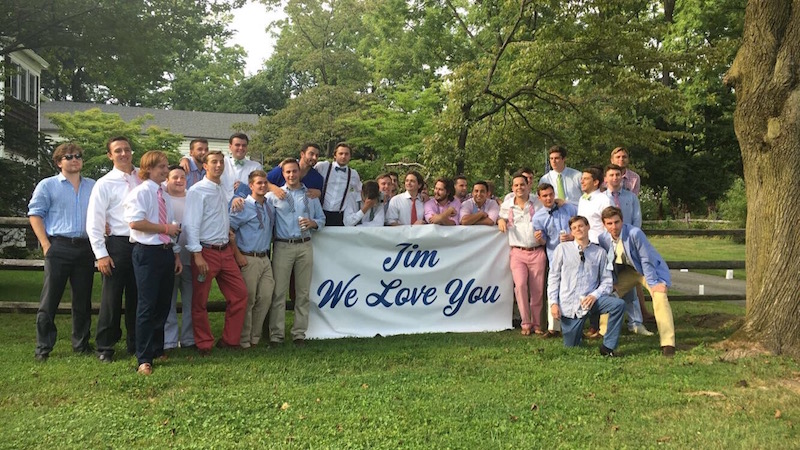 Buddies from Malvern Prep and St. Joe’s gathered at the Klinges home after Jim’s funeral August 31. The group hopes to form a non-profit to raise money for leukemia research in their friend’s memory.

Jeff Quinn turned 22 on June 29. Jim Klinges’ 22nd birthday would have been Thursday.

Rest in peace, Jeff and Jim. You left this life far too soon.