Brought to you by our friends at Happy Being Co. 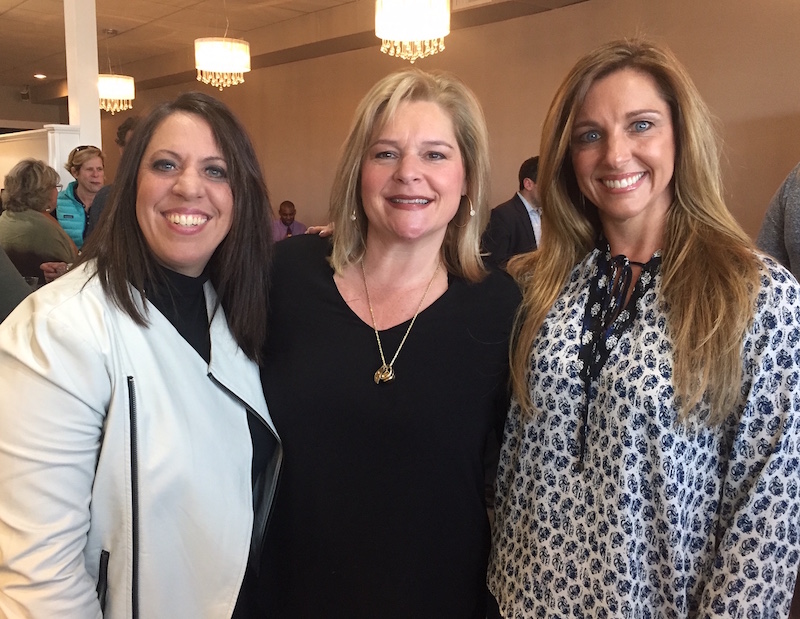 Wait ’til you see what Main Line culinary queen Meridith Coyle’s cooked up this time. The gal who brought us Meridith’s Market, Binnie & Flynn’s II, Fresh Ideas Market and Aneu Catering has come up with, yup, a fresher idea.

Call it “ANEU Approach” to eating, dining, and throwing parties. (She does.)

In expansion mode, she just bought a whole shopping center – near Del Chevrolet and the Van Cleve Pavilion in Paoli.

Walk through the market to the ANEU Approach Café, an all-organic, full-service, 60-seat breakfast and lunch spot.

Or saunter next door to plan your next party with ANEU Catering & Events, now headquartered on the corner. 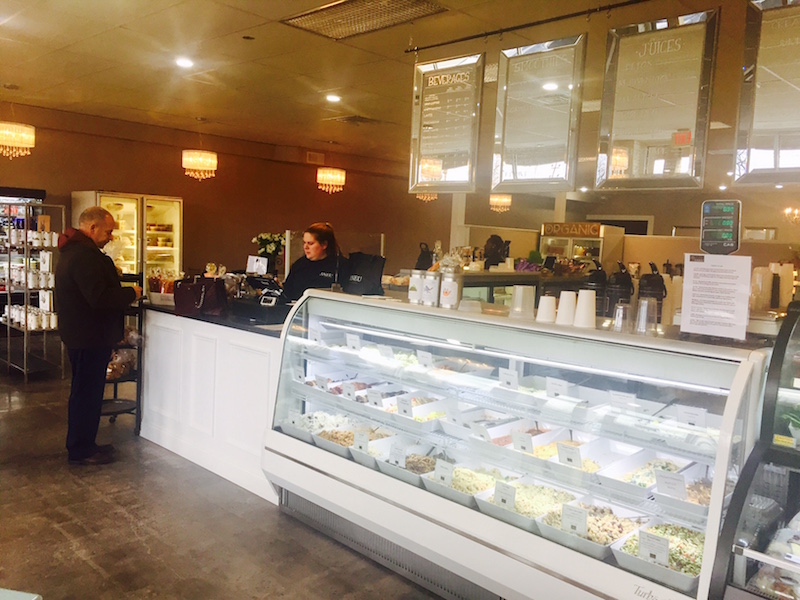 The counter at ANEU Approach Market.

First, the dish on the new ANEU Market:

It leans super-healthy but still sells some sinfully delish, housemade foods and treats.

The operative word here is “clean” – everything’s humanely raised and made from a handful of ingredients – all chemical free, Meredith tells SAVVY.

*Nine all-organic smoothies without the sugar and stabilizers that some chains add (Sm $6.95/ Lg $8.25).

We slurped up the “Radiance” blend of banana, grapefruit, mango, orange, yellow pepper, turmeric and OJ. Our complexion said thank you.

* Popcorn with a Purpose. Turns the sweet, salty stuff into a tasty and nutritious non-GMO, organic, detoxifying, anti-inflammatory, gluten-free snack. Varieties include Spirulina, East Herb, Spicy Tomato, Dusted Cacao, Black Out and, for the next month only, SAVVY. 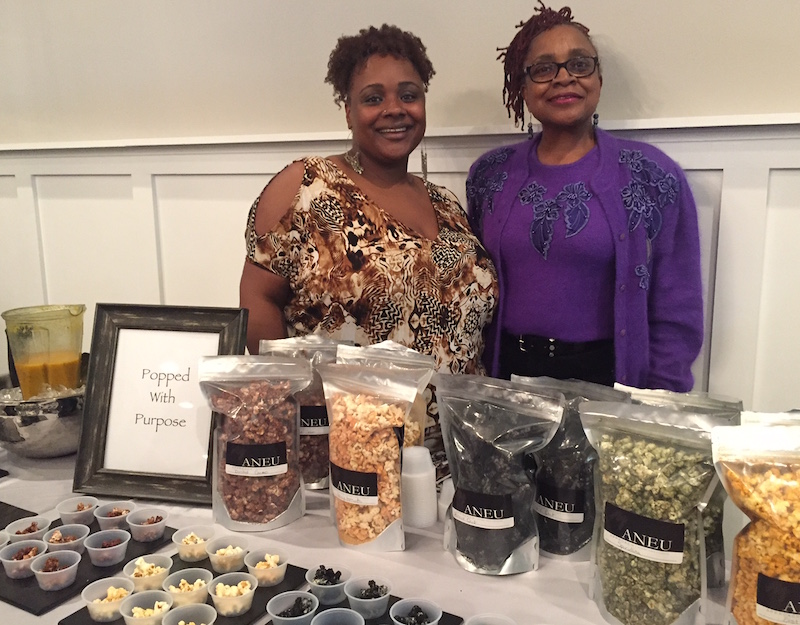 Executive Chef Dorinda Hampton and her mother, Catherine, show off the house-made Popcorn with a Purpose at ANEU’s grand opening party.

***You read that right. Through March, SAVVY e-mail subscribers get a free bag of SAVVY Popcorn, a custom blend pumped up with two sensational superfoods: spirulina and wheat grass. Tastes way too good (slightly cheesey/herby) to be so good for you. Not a SAVVY subscriber yet? Sign up on our home page pronto. To claim your popcorn, simply whip out your phone and show either our e-newsletter or your subscriber confirmation email to the nice folks at ANEU. (P.S. We love that you “like” SAVVY on Facebook. We like you, too. But you gotta be an email subscriber (new or old) to claim your swag.)***

Back to business…. In the rear of the market, ANEU Approach Café opened quietly last week. More pizzazz is coming but for now, the simple, clean décor matches the clean, all-organic fare. Everything is scratch-made on site, save the Spring Mill bread, which is scratch made a few miles east in Wayne.

Prices are generally a few bucks more, but, hey, that’s the going rate for organic.

Some early faves from the breakfast and lunch menus:

ANEU too far off your beaten path?

The Juice Merchant, a Manayunk hit since its debut in 2014, is taking over the old Art of Bread space in Narberth. Organic juices and smoothies. Like ANEU but closer. And when it opens later this month, a smidge newer.

We took Haverford’s new Incline Running studio out for a nice, long (power) walk the other day.

In the former Robinson Luggage store on Lancaster Ave., Incline is indoor, top-shelf aerobic fitness on the order of FlyWheel and Soul Cycle. 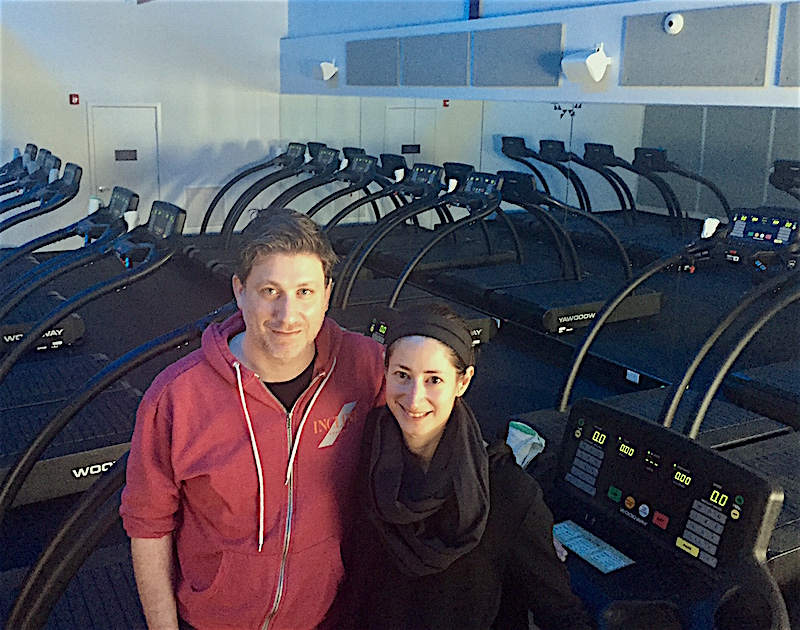 Owners Joshua and Julie Hirshey inside their new Haverford studio.

Equipment, amenities, motivating “coaches” (talkin’ ‘bout you, Scott) and X-factor cool quotient – Incline’s got it all. With prices to match. (Nope, you can’t have everything.)

And like every smart startup, Incline is a concept that solves a multitude of fitness problems. (More on those later.)

Lest you think we’re running wild with praise here, consider these goodies:

It attracts, among others:

And it eliminates the weather problem – power walks and runs cancelled by rain, ice and snow.

Incline Haverford is running ahead of the pack here. While there are similar studios in NYC (Mile High Run Club) and Boston (Heartbreak Hill, My Stride), there are no other Philly-area group ex studios dedicated exclusively to indoor running and walking.

Not yet, at least.

Pop the bubbly and cue the jackhammers. The overhaul of the Paoli train station is ON TRACK.

So it took 25 years – we’re cool with that, as long as the project keeps chugga-chugging along.

Officials from Tredyffrin, Chesco, Amtrak, SEPTA and PennDot gathered at the train station Tuesday to mark the start of Phase One, which will make the station wheelchair friendly (finally). 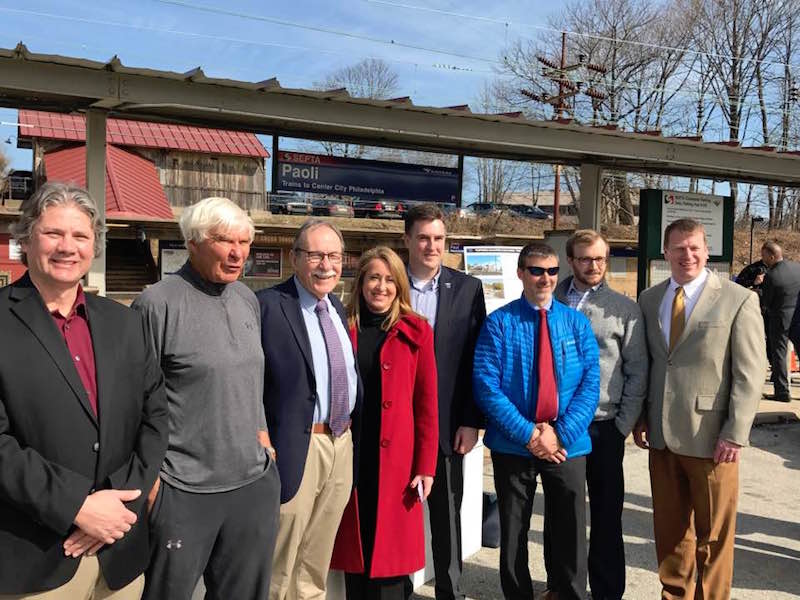 The next phases will be even more fun.

The dumpy station that’s showing every one of its 63 years will get the heave-ho.

Taking its place: a modern “transportation hub” with a commuter parking garage, retail and better bus facilities. All of which will bring the station, one of the busiest transit spots in the Philly burbs, into the 21st century. ‘Bout time.

Still, all systems are go.

First the transport hub, then a revitalized downtown Paoli.

We can hardly wait.

First, there’s that mensch of a songwriter, Benj Pasek – the Ardmore-bred, Friends Central alum who, if only for a night, changed the channel on his high school’s Palestinian speaker saga.

Nice Jewish boy, he asked his super-accomplished mother to be his date to the Oscars. 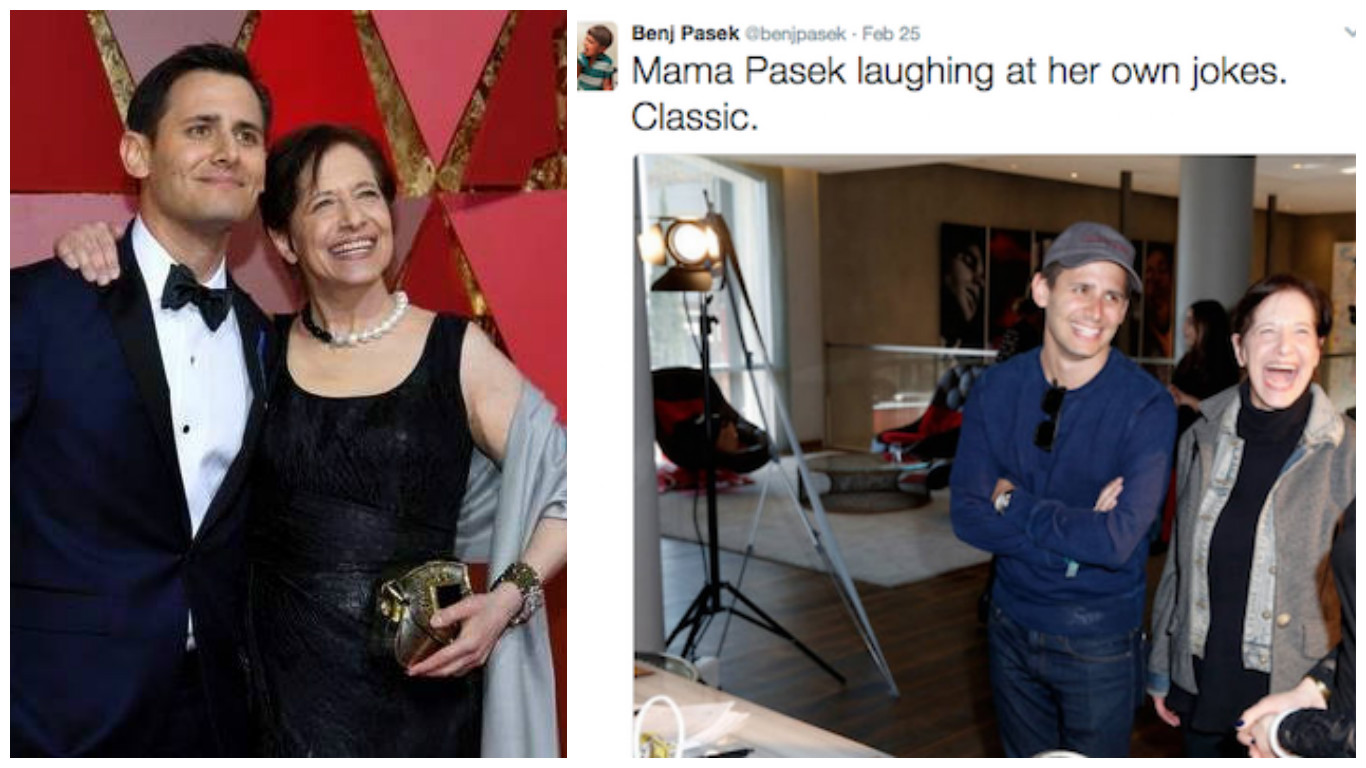 Then, clutching his shiny statuette for “City of Stars”  – and with millions watching – gave her – and dreamers everywhere – the sweetest of shoutouts:

“I want to thank my mom who is my date tonight. She let me quit the JCC soccer league to be in a musical. This is dedicated to all the kids who sing in the rain and all the moms who let them!”

His mom, Dr. Kathie Hirsh-Pasek, is a pretty big deal herself. She’s a Distinguished Fellow at the Dept. of Psychology at Temple and author of 11 books, including the NY Times bestselling “Einstein Never Used Flashcards: How Children Really Learn and Why They Need to Play More and Memorize Less.”

Clearly, she took her own advice when she raised Benj. And she hopes her son inspires others: “There are all those kids out there who spend their life’s dreams on those stages acting and singing their hearts out …  Really, this is for all them to say, ‘It’s possible!'” Hirsh-Pasek told 6ABC.

Even Broadway’s Hamilton creator, Lin Manuel Miranda, got in on the mom-son act, tweeting: 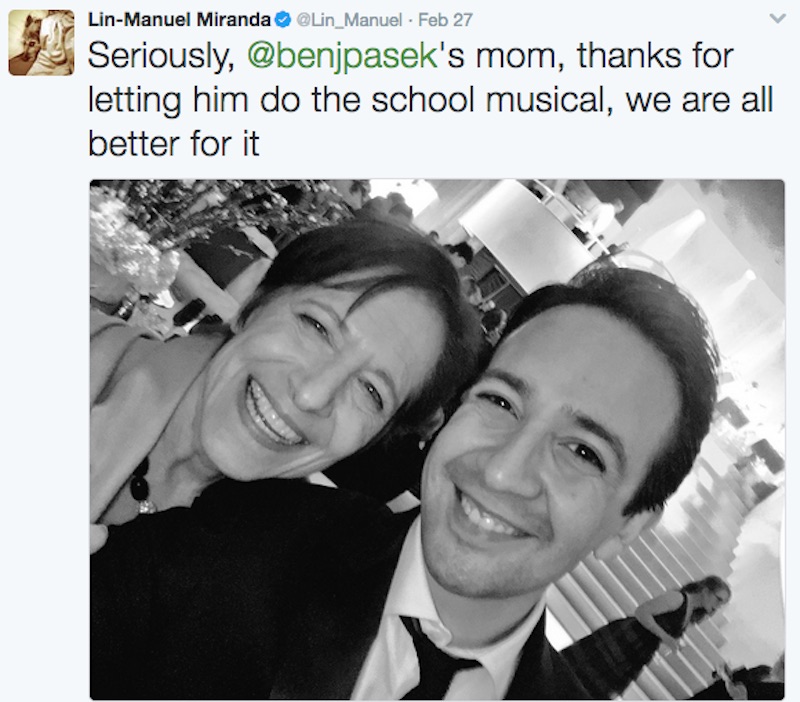 “Best Director” La La Land Oscar winner Damian Chazelle is in a serious relationship with the lovely actress/model/entrepreneur Olivia Hamilton. Whose parents, Oma and Steve Hamilton, just happen to hail from Haverford. Olivia played Bree the Gluten Free Girl in La La Land. Chazelle gave her a “the love of my life” nod from the Oscar stage. Aw.

Another local connection, but this one’s to Manchester by the Sea, a double Oscar winner Sunday night.

Villanova U. can keep its crosses.

For months now, the University has planned to put crosses on either side of the pedestrian bridge it’s building over Lancaster Ave.

But when word spread, the prospect of two, 4 ft. 7 in. crosses made some neighbors, well, cross.

Too blatant a show of religion in a multi-cultural Radnor Township, they said. 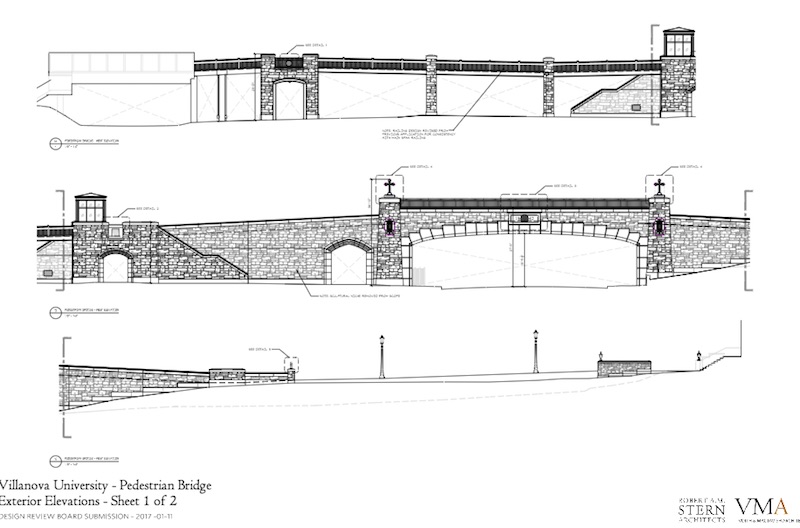 Township commissioners and residents debated the issue at their Monday meeting, then voted 6-0 to allow the crosses (with Board Pres. Elaine Schaeffer abstaining). The board decided it didn’t have the authority to block the plan.

The bridge is on school property and part of the school’s $285 million expansion project that includes a parking garage (already open), a performing arts center and six apartment-style dorms with ground-level shops, fitness center and bistro.

In a nifty little wrinkle, you and your pals get a personal guided tour through your multi-course meal with new Chef Scott Morozin. If you ask, they’ll even tell you what kind of wine to tote for each course.

$60 pp. Four to eight guests at the Table. Reserve at least three days in advance. Only one Chef’s Table per Friday.

“What Parents Need to Know About Social Media and the Internet.”

Get the straight scoop at a free workshop Wed. March 15 at Harriton High School at 7 p.m. Among the night’s hotter topics: how employers and colleges use social media to evaluate applicants.

A SAVVY shoutout to Dr. Taliba Foster, just crowned a Woman of Substance and Style by a Philly style icon herself, Joan Shepp. 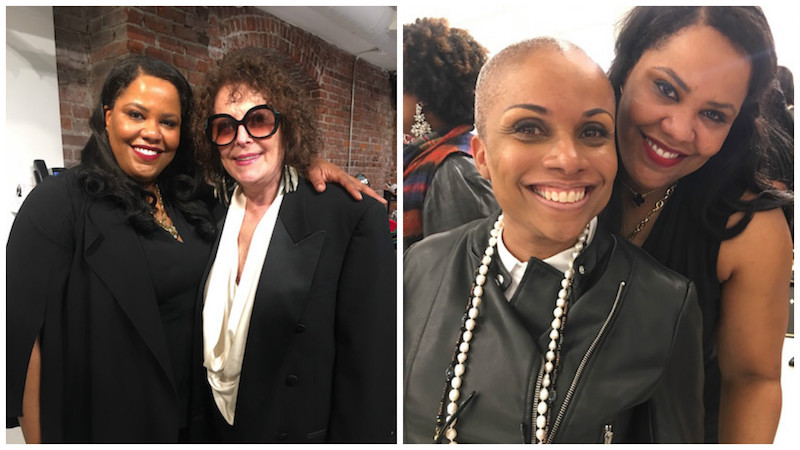 An award-winning psychiatrist in Ardmore who teaches at CHOP and directs its telephonic psychiatric consult service, Taliba has a national profile, too. She’s active on the AMA’s Minority Consortium, the National Leadership Summit on Health Disparities and the Congressional Black Caucus’ Health Braintrust.

Locally, she’s a trustee at the Agnes Irwin School and Minding Your Mind.

Here’s one for anyone who’d rather whoop it up than stop ‘n’ smell the flowers at the Phila. Flower Show. Or better yet, do both.

A brand-new event, “Flowers After Hours: I Love the ’90s” sounds like a hoot.

And finally, be sure to come by and say hi if you’re going to St. Katharine of Siena School’s Centennial celebration next Thursday, March 9 at Aronimink.

SAVVY Main Line is the media sponsor and yours truly will be emceeing the “Fabulous at Every Age” evening festivities. Lots of smashing vendors and a vintage fashion show featuring modern interpretations of Chanel, Dior, CVF and Twiggy/Mary Quant style from Malena’s Vintage Boutique in West Chester.