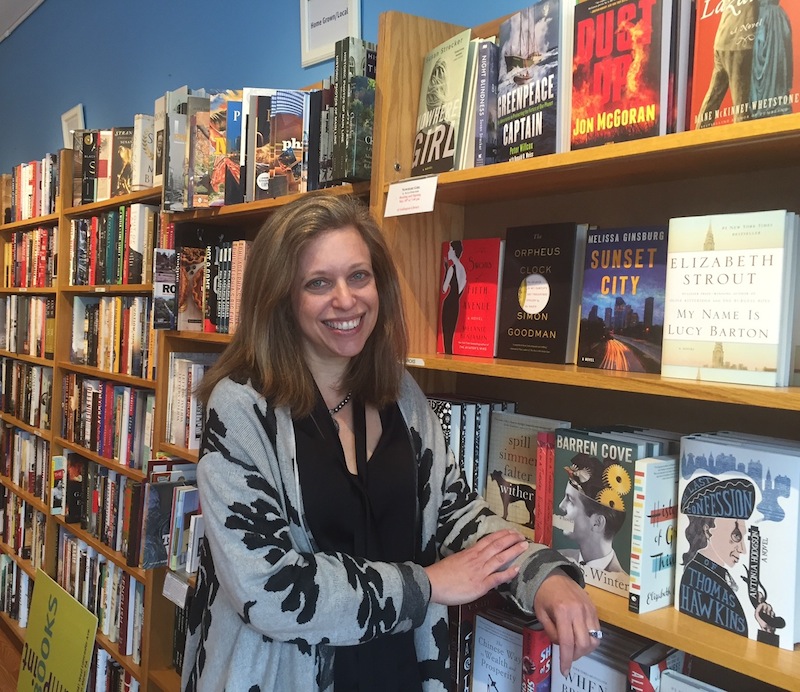 So score one for Wayne in the Main Line Downtown Showdown.

“I wouldn’t have moved if I hadn’t been offered this specific space,” says bookseller Cathy Fiebach, a Wynnewood mom who will pack up Bryn Mawr after a three-year run and open on North Wayne Ave. the last week of July.

‘Cause Wayne’s got what Bryn Mawr’s still pining for: foot traffic.

“People understand how to park in Wayne and how to walk around town,” she tells SAVVY. “Bryn Mawr doesn’t quite have that worked out.”

Cathy has big plans for the new Main Point Books: more titles, expanded kids and young adult sections and seating for nearly 100 for her usual jam-packed roster of author events and community gatherings. If all goes well, a basement renovation could even double her space.

And unlike Bryn Mawr, the Wayne store will stay open at night so folks can browse while they wait – for a table nearby or a movie around the corner.

The shop will get a top-to-tail makeover but will “still feel homey and comfortable – a place to hang out and get good advice,” Cathy says. And, bibliophile that she is, Cathy is always thrilled to dispense it.

Millennials, meanwhile, might want to dust off their wands and capes.

In a stroke of cosmic luck, the store’s Wayne opening coincides with the July 31 release of the new Harry Potter stage play in book form. Naturally, Main Point Books will host a midnight launch party for “Harry Potter and the Cursed Child” – costumes encouraged.

Even as their numbers grow nationally, mom-and-pop bookshops remain iffy enterprises. This one is no different – with Kindle downloads a click away and that shiny, new Radnor library being built down the street.

“I’m still inching my way to being in the black,” Cathy admits. “Wayne might make a difference between every year being questionable and having enough volume to make it work.”

So c’mon, Main Line readers. Pump up her volume. Make this thing work.

Just around the corner, Bella Oliva Taproom, sadly, is just about tapped out. The olive oil and vinegar store near the Wayne movie theater will close at the end of May after a three-year run.

“The landlord [S. W. Bajus] is raising our rent so we’re looking to go elsewhere,” says Barbara DeMoura, who came out of retirement with husband Brian to run their daughter’s shop when she moved to London in the summer of 2014.

“We were her backers in the beginning but we didn’t expect to be left with it,” Barbara tells SAVVY, laughing. “Wayne’s been wonderful, though.”

A clearance sale began this week: Buy one oil, vinegar, salt or spice; get a second for half off. Everything else is 40 percent off.

One spot where Bella Oliva won’t go is the Rosemont Farmers Market. A recent stint there was a “bust,” Barbara says.

(Whether the whole Rosemont shebang is a bust is an open question. The market’s website lists just seven tenants, down from 12. Another ouch: It’s also been hit with lawsuit from a Florida man in a wheelchair who claims the market isn’t handicapped accessible. The same guy is suing Eagle Village Shops for the same thing.)

Discriminating home décor hounds have been sniffing around Wayne and digging up deals for years.

The hunting grounds will get even happier in a few weeks with the opening of Accents on Main.

Accents is taking the space next to the Gap that’s been gathering dust for months.

Helming the venture is Diane Wulk, the discount powerhouse behind Berwyn’s thriving Chic & Simple Resale Shop and Chic & Simple For Her (in the old Yang’s Market).

Eighty percent of Accents on Main’s furniture and accessories will be new; 20 percent will be “better, pre-owned,” Diane tells SAVVY.

Most inventory will come from closeouts, discount showroom samples and model homes. (Oooh, we’re liking the sound of that.)

The secondhand stuff will be bought outright – not consigned – by appointment only. (BTW, Diane has been known to make house calls.)

Expanding to her Wayne hometown was not Diane’s plan. “Someone made me an offer I couldn’t refuse,” she says. (Which is kind of shocking, considering downtown Wayne is anything but, uh, low rent.)

Another Wayne wheeler-dealer (and we mean that in a nice way), Velvet Shoestring, is also expanding. The high-end furniture consignment shop is so doggone popular, it needs a second storefront. Mother-daughter owners Jacalyn Stephans and Avery McMahon are converting the former Forster’s frame shop – whose owner just retired after 41 years –- to Velvet Shoestring Studio. 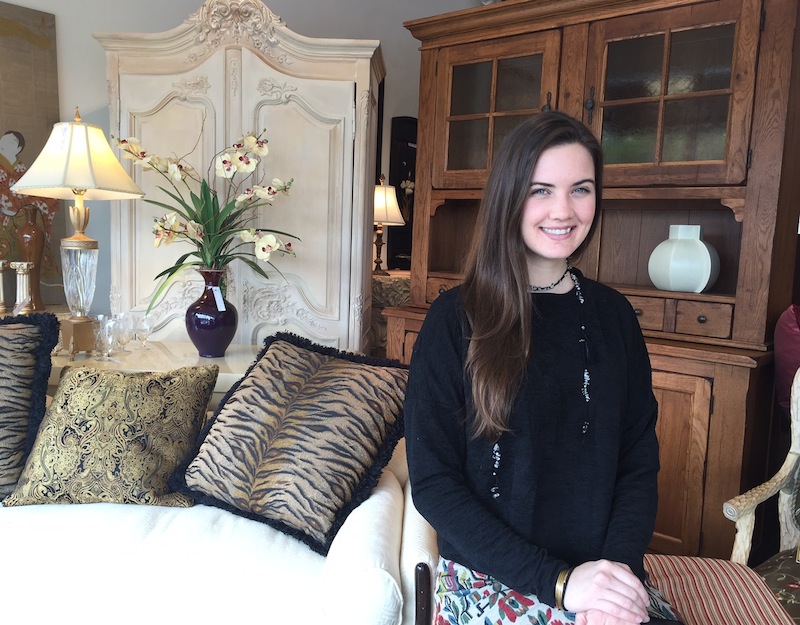 Avery McMahon and Velvet Shoestring will unfurl another Wayne store.

The two will set up whole-room tableaux in the Studio “to give people a chance to visualize what our inventory has the potential to be in their own homes,” says Avery.

It’s the second, smooth move for Velvet Shoestring, which quickly outgrew its shop across the street (now Mushmina). Look for the Studio to open in mid-to-late summer.

And just to catch you up on all things Wayne: 17-year-old Beethoven (Wraps) rolled over to new space and a new name in November. Tired of being mistaken for a sandwich/wrap shop, owner Donna Martella re-branded as Belladonna Gifts and took over the old Lucky Duck Toys, consolidating her old card shop (once Katydids) and her original Wraps store in one spot.

She’s upped the ambience in the new space – only fitting for a shop that peddles in personalized, tasteful gifts.

And those excellent re-upholsterers and stitchers, Williamsons of Wayne, well, they didn’t stay put either. Williamsons left South Wayne Ave. to take the original Beethoven Wraps space on Lancaster Ave. in January. 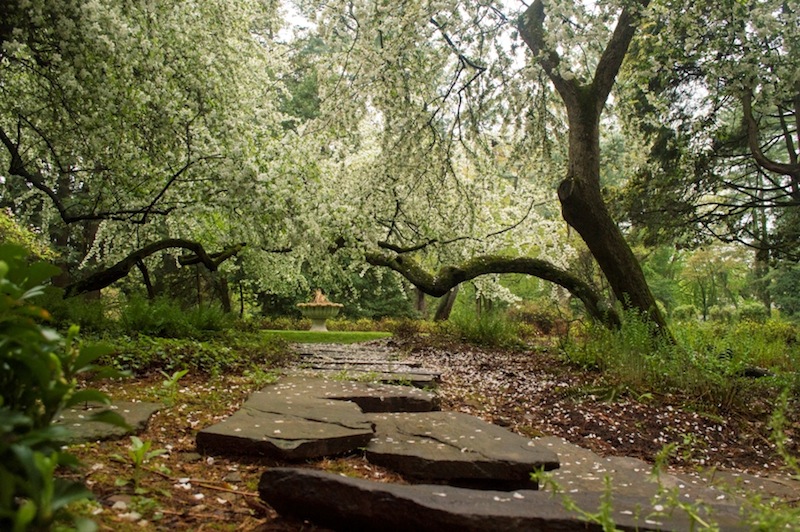 A view of the native plantings at Stoneleigh in Villanova, soon to be a public garden. (Photo by Mae Axelrod)

We’re pinching ourselves. The children of the late philanthropists Chara and John Haas (as in Rohm & Haas) have donated their parents’ gorgeous 42-acre Villanova estate, Stoneleigh, to the conservation group, Natural Lands Trust.

Yup, they simply signed it over. When they could have sold it for gazillions to a developer (or a certain college nearby).

Which means the Haas’ circa-1877 mansion and historically certified grounds – designed by sons of primo landscape architect Frederick Law Olmstead, no less – will be saved forever. 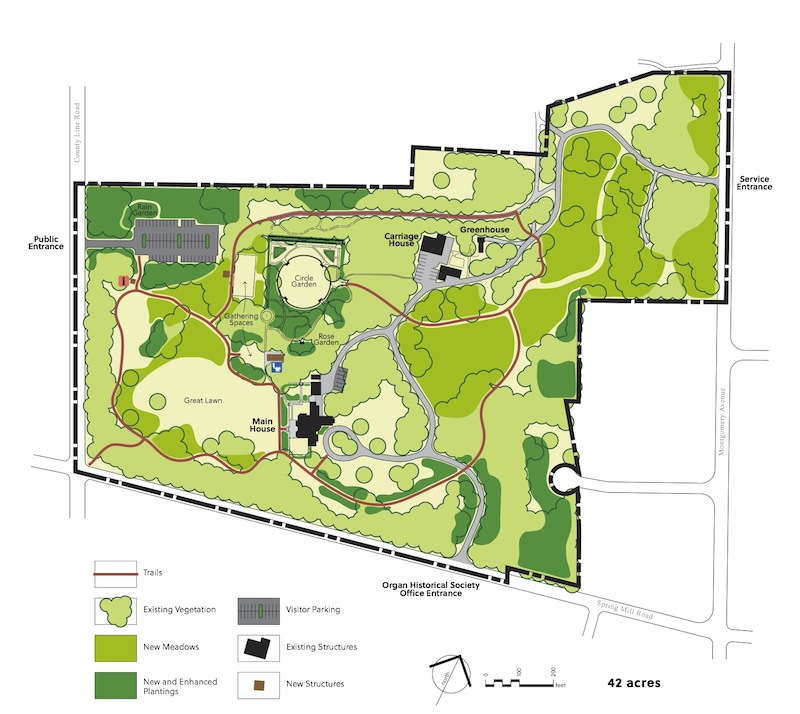 Natural Lands Trust’s site plan for the future Stoneleigh, 42 acres to be preserved as green space in perpetuity, thanks to the Haas children.

But wait, it gets better: Stoneleigh: a Natural Garden (that’ll be its new name) will be free and open to the public with onsite parking in about 18 months.

And saving the best for last: Those supercute carved bunnies at the corner of Spring Mill and County Line – they get saved, too.

This being that time of year, we asked the SAVVY Street Team’s newest mom, Aly Ricker McBride, what she’d like for her first Mother’s Day.

And in her usual, finger-on-the-pulse fashion, Aly wowed us with her list, fired off in her usual record time. Read it and be inspired: