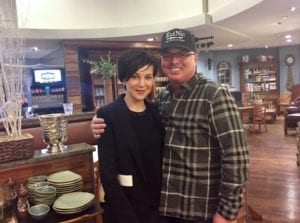 Yours truly from the spring 2015 shoot. Photo by Brenda Carpenter.
If you’ve shopped at Polka Dots or get Chester County Life Magazine in the mail (congrats—that means you’re in a “desirable” income bracket!), you’ve probably seen my mug.
For the last several years, I’ve been modeling in the Paoli boutique’s spring and fall photo shoots – the results of which are splayed across posters, social media, newspaper ads and the glossy pages of Chester County Life. We just wrapped our seventh shoot two days ago; I was the oldest model in Monday’s shoot by three years.
So why do I do it? Good question. It’s certainly not for the money – although we do get a modest gift certificate.
Being a newly introspective sort, I’m trying to figure out why I keep saying yes.
Yes to giving up a full day.
Yes to freezing in summer dresses in March and roasting in fall clothes in September.
Yes to exposing myself to unknown/uncontrollable results. (I can’t tell you how many times I’ve been tagged on Facebook or opened the magazine and cringed or felt just a wee bit ridiculous.)
I’ve thunk on it and here are 6 reasons I say “yes” to playing supermodel twice a year:

For starters, the shoots bring me back to the adrenaline-rush, creative fashion shoots I produced for Main Line Media News. I would rustle up volunteer models, cool clothes and nifty locations (Life’s Patina at Willowbrook Farm, Wayne Hotel, Appleford, Valley Forge Park, etc.), and if I got really, really lucky, Berwyn’s own Brenda Carpenter would take the photos. These days, when I model for Polka Dots, I’m part of the show but don’t have to run it. The only things my little brain is busy thinking about are ornery bra straps and wayward hats.

I like getting fawned over. It’s ridiculously indulgent having someone else paint your face (harlot-like because the camera drains it all out), doll up your hair (hats off to Heather and Studio H), zip you up (kudos, Karen), and fuss over whether to go with the pearl studs or the resin dangles (thank you, Lori).

I get to play the hooky I never played in school. No researching, no interviewing, no writing, no exercising. The shoots are relaxing and energizing at the same time. All I have to do is show up wearing presentable underwear and say cheese.
Lounging around in Jude Connally duds with my sister models, Lone Spillard and Megan Keating.

Going a bit deeper here, turns out I like hanging with other women. For a stretch (before I married Rich), my best friends were almost all guys. But more and more, I appreciate the comradery of women. During the shoots, we get to know each other rather intimately. At the start of Monday’s shoot, we changed in bathrooms. By mid-afternoon, we stripped down any ole place. By day’s end, we were fast friends. I exaggerate, but you get the idea.

Unlike the real world, everyone is super nice to us and makes us feel special – from Polka Dots owner Susan Randels and her stellar team (Karen Denney, Lori Horning and Sheila O’Connor), to photographer Brenda Carpenter, Boutique Buzzz’s Courtney Davis to Heather and the crew at Studio H. Even the homeowner and realtor at the spectacular Southern Living-like mansion site on Waterloo Road in Devon couldn’t have been more gracious. We all cheer each other on and feel like we’re part of something glamorous, if only for a day.

And last, but, I fear, not least, it’s a huge ego boost. On a recent Friday night at the bar at Nectar (a scene that’s a blog post in itself), two strangers told me they recognized me “from the magazine.” Ha. Never thought I’d hear THAT in my mid-50s! My husband was secretly pleased, too, I think.

So that, dear reader, is why I do it. It fills a few needs – superficial and otherwise. More than anything, it’s a hoot.
And if you’ve read SAVVY’s “About Me” page, you know that having fun is something I take very, very seriously.