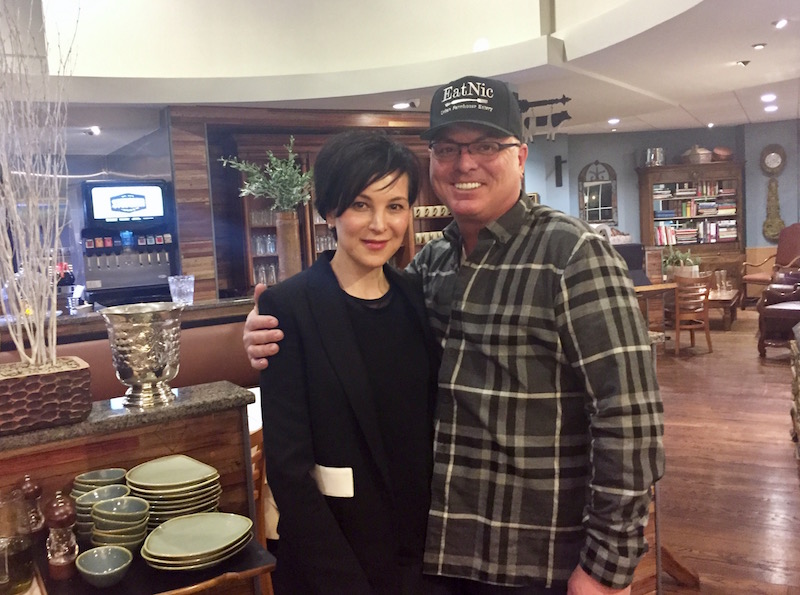 Gail and John Scardapane, creators of Eatnic, at their new Paoli restaurant.

Which means this modest eatery on a non-descript stretch of Route 30 is a pretty big deal, folks. 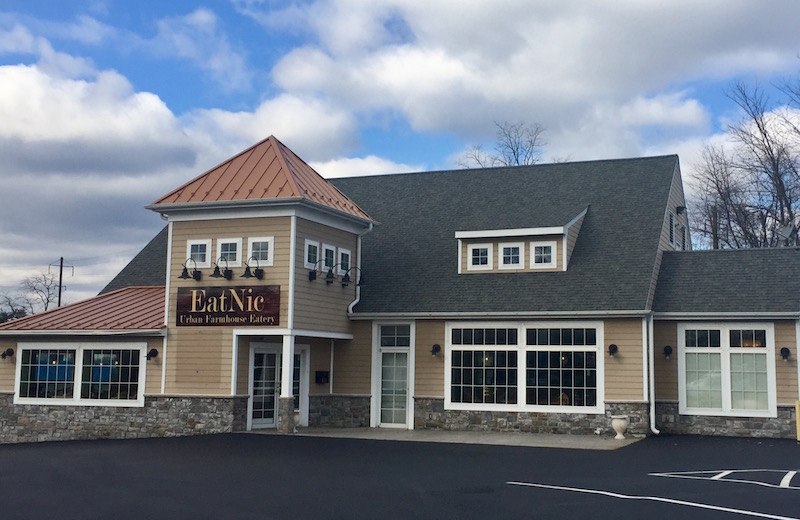 We’re the beta-test market, the guinea pigs, for a concept that’s “the culmination of 30 years of looking at restaurants across the nation and world,“ John tells SAVVY. “We’re creating a new category here – a restaurant that’s like your home,” he says. “You can come in here from 8 until 8 – the kitchen doesn’t close. We serve basic food all the way up to fancy French dishes.”

Everything at Eatnic is scratch-made. Eggs, produce, grass-fed beef and the like are largely organic and sourced from local family farms.

“That’s why our salads are so good – because our farmers are ten minutes away and delivering here seven days a week,” John says.

Eatnic’s open kitchen is led by the former exec. chef at Wayne’s Silverspoon, Tim Courtney. To capitalize on freshness, he plans to tweak the menu every other day. 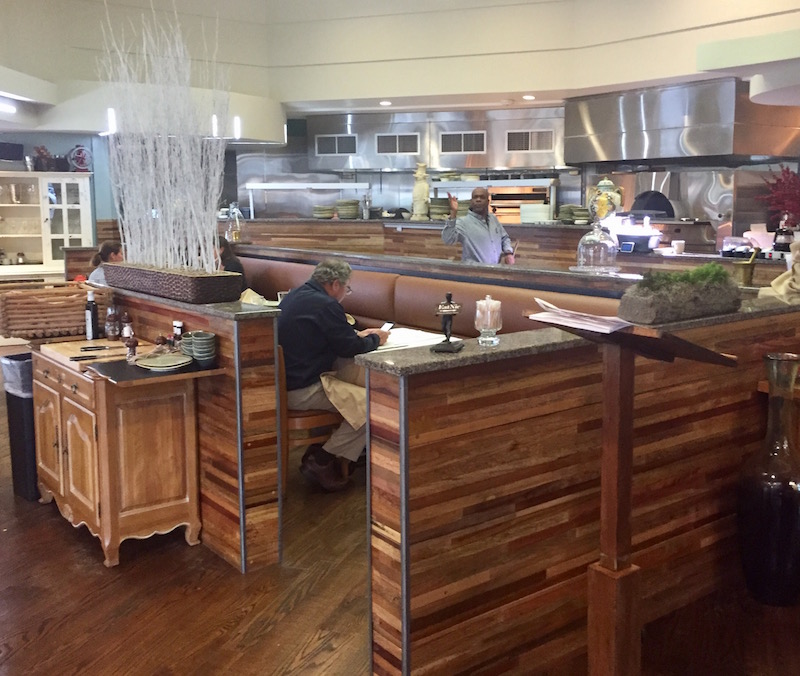 The open kitchen at Eatnic.

With its BYO policy and prices a shade more palatable than the Main Line’s other notable farm-to-forker White Dog, Eatnic wants to become your once-, twice-, even thrice-weekly habit. Your home kitchen, away from home.

“Just because farm-to-table is trendy and chefs love to cook it, doesn’t mean it has to be fine dining,” Chef Tim tells SAVVY.

The décor is shabby chic farmhouse, a quirky collection of mismatched stuff all gathered by John himself, right down to the crystal wine glasses. “As soon as you walk in, you’re supposed to think, ah, you’re home, you’re welcome in this place,” he says. 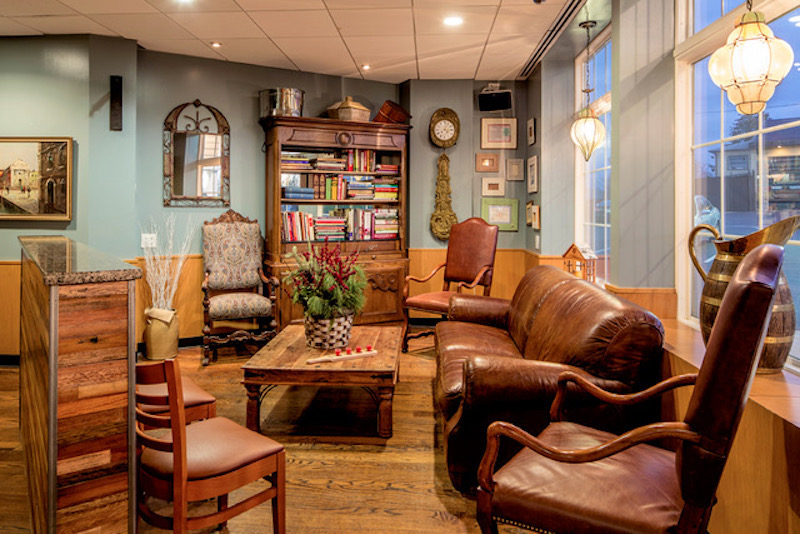 The foyer at Eatnic feels like your family room.

In keeping with the homey theme, Eatnic invites you to submit a fave family recipe. If it makes the menu, you’ll get a $200 gift card and naming rights.

Figure $11-$14 for most breakfast plates, salads, sandwiches and pizzas, and $24 – $34 for dinner entrees. While you’ll be handed a meal-specific menu, you can order anything from any menu at any time, John tells us.

Eatnic is a family venture for the Scardapanes, who recently downsized from Allen Iverson’s Villanova manse to a home in Wayne. John’s wife, Gail, handles PR and marketing, and son Anthony is the owner.

The Scardapanes were already leasing the Paoli space – for eight years it was a company-owned Saladworks.

And after battling serious illness for a few years, John was feeling better.

Plus, he figures we Main Liners know our stuff.

“The Main Line has very experienced diners,” John says. “If I’m able to make it here with people who know what good food and quality service is … I can make it in other markets.”

In other words, if Eatnic can make it here, they’ll make it anywhere. It’s up to us.

It’s official. The former Devon Manor nursing home will become a deluxe drug treatment and recovery center – the first of its kind in the heart of the Main Line.

New owner Brian O’Neill tells SAVVY he’s gutting the place, overhauling the landscaping and will open one of his RCAs (Recovery Centers of America) in March. “Heroin is a Main Line drug,” Brian told us, shortly before speaking at Rosemont’s New Leaf Club Friday night. “This is a great location for us.”

An RCA was slated to open near Paoli Hospital, but Brian says he’ll likely make it a sober living/outpatient center instead.

Brian’s company is built on the belief that recovery services – from inpatient detox through outpatient support – must be close to home to be successful. To stay clean and sober long term, you have to have your peeps nearby: your family and those new pals you made in recovery.

And if accommodations are five-star hotel quality (as RCAs claim to be),  you’re more likely to agree to go – and to stay put once you’re there.

The RCA in Devon will be the company’s fifth – others are in Mays Landing, NJ, Maryland and Massachusetts. Backed by oodles of venture capital money, O’Neill plans to expand throughout the northeast and eventually, across the country.

Lynne, you may recall, is the 62-year-old yoga teacher who pleaded guilty to selling heroin out of her Wayne home.

On Friday she was sentenced.

Prosecutors wanted her jailed for up to five years. But instead, she got 90 days (with credit for a month already served) and seven years of probation.

More significantly, she was accepted into Recovery Court, which means she’ll go directly from jail to an inpatient rehab center, then to a halfway house. A year of house arrest will follow.

Lynne has lived with her husband on Pugh Road near New Eagle Elementary for 20 years.

Like so many, she got hooked on painkillers prescribed after surgery (two hip operations), then moved to easier-to-get and cheaper heroin.

Sadly, Twaddle has a history of addiction. She had DUIs in 2004 and 2007 and was convicted of possession of a controlled substance in 2005 and drug paraphernalia in 2011. She attended AA meetings for years, then relapsed, her attorney said.

Police found 67 baggies of heroin in her master bedroom after her arrest. Her attorney told the court she wasn’t a hard-core dealer. He said she sold heroin to just one person: a friend who ended up being the police’s informant.

Moving on to cheerier tidings… For 41 years, People’s Light in Malvern has been the only professional theatre game in town. But that ends soon with the debut of RTC (Resident Theatre Company).

Beginning in spring 2017, RTC, a non-profit like People’s Light, will stage musicals – performed by NYC and Philly pros – at a brand new venue on High Street in West Chester.

Another nonprofit (The Uptown! Entertainment Alliance) spent the last few years transforming a historic armory into the Knauer Center for the Performing Arts, which will host RTC’s plays, along with jazz and Latin concerts and lectures. 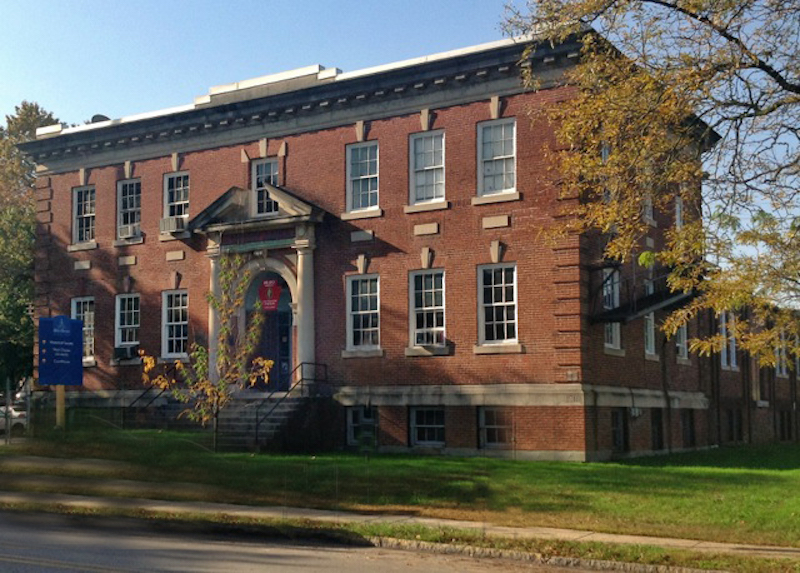 Built in 1916 and on the National Register of Historic Places, the former West Chester National Guard Armory is now the 300-seat Knauer Center for the Performing Arts. A sold-out gala on New Year’s Eve will christen the new venue.

And this Saturday, Dec. 17, RTC takes its show on the road to present a “Holiday Broadway Bash” at the Wayne Art Center. Your $75 ticket buys a show tune review, food, drink, silent auction and access to WAC’s world-class Craft Forms exhibit.

After the stunning death of owner Susan Randels last June, we all feared the worst for Paoli’s Polka Dots.

Turns out, we had nothing to fear. The popular boutique hasn’t skipped a beat.

Polka Dots celebrated its 13th anniversary Thursday and we hear business has never been better.

“Her store and her family were my mom’s life,” Ryan Randels tells SAVVY. Now a co-owner, Ryan, his wife and new daughter flew in from their Colorado home for the store’s shindig. “It’s amazing how much Lori [Horning], Karen [Denney] and Sheila [Wagner] have stepped up and how well they’ve continued her legacy.” 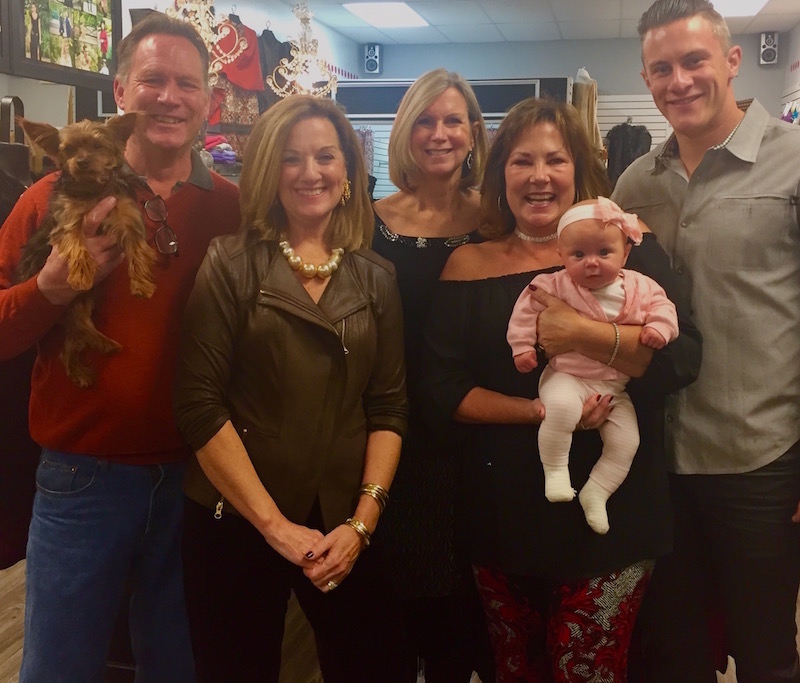 Fortunately for shop loyalists, Susan was an open book. “She included us in everything she did, so we know how to buy, how to deal with vendors, how to merchandise,” says Karen Denney. “We just took a deep breath last summer and said, ‘We can do this.’”

Yes, you can and you have.

And somewhere up there, Susan is smiling.

Still prospecting for presents? Here are a few SAVVY suggestions. Almost all have local ties.  Because, well, charity begins at home. 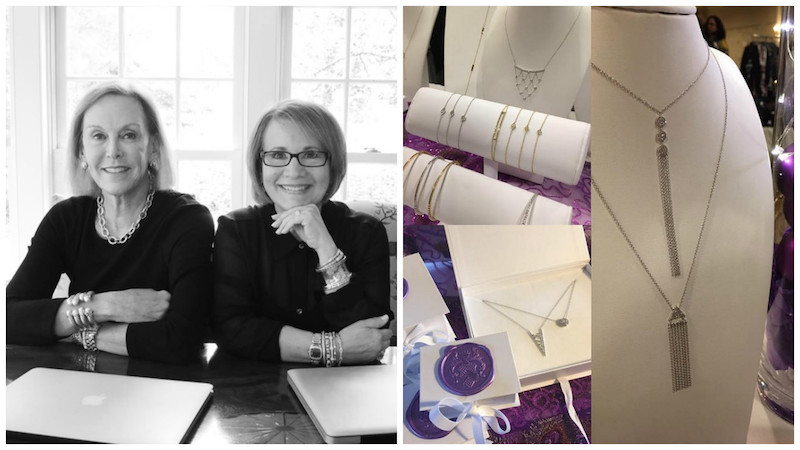