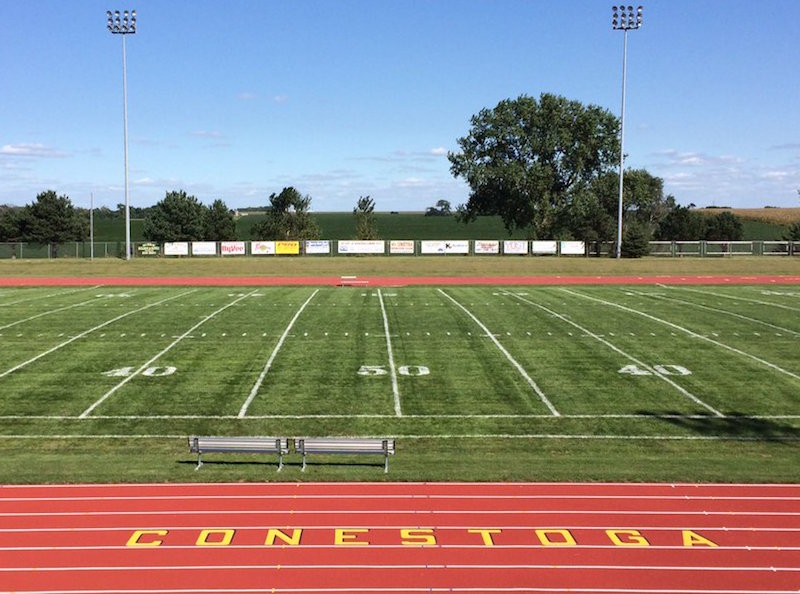 Lawyers for all defendants have filed motions to dismiss the case – the coaches on Nov. 30 and the school district on Dec. 9, according to court records. The plaintiffs have until Jan. 31 to respond to the motions to dismiss.

The district declined specific comment, citing “student and employee privacy rights under law.” The district “stands by statements made in the district’s March 17 letter to the community,” T/E solicitor Ken Roos tells SAVVY via e-mail. “Beyond that, we cannot comment on this pending litigation.”

The civil suit charges that Conestoga football coaches – whose offices were “a few feet” from the locker room” – knew about but ignored the “culture” of “sexual hazing, bullying, hatred and abuse” including “No Gay Thursdays” but continued to leave the football locker room unsupervised, calling it “the players’ space.”

The suit also alleges that coaches failed to discipline “the harassing students,” which allowed the “sexual abuse and harassment” of the plaintiff to “continue and escalate.”

The suit seems to turn the school district’s internal hazing investigation against itself, citing T/E’s own public admission that the Stoga locker room was insufficiently supervised by adults.

The district’s “egregious disregard of a well-known hazing culture and the dangerous indifference to observed player-on-player physical and sexual abuse resulted in a denial of the minor Plaintiff’s statutory … and constitutional rights,” the lawsuit reads.

In explicit detail, the suit describes four separate incidents of abuse that culminated in the alleged broomstick sodomy.

In the first incident, the plaintiff was allegedly forced to strip down to his underwear, put in headlocks, pinned to the floor spread-eagle style, kicked and hit with a belt.

The second incident alleges that three older players demanded that the plaintiff, who was in his underwear, put compression shorts on one of them, who was naked from the waist down. According to the suit, an assistant coach entered the locker room but took no action beyond asking what was going on and ordering the players to “get out and practice.”

The suit alleges a third instance during which a different assistant coach is said to have witnessed older teammates holding the plaintiff in a headlock and then “walked away.”

The fourth incident detailed in the suit was the alleged Oct. 15 broomstick sodomy of the freshman through his boxer shorts.

Worth noting: The plaintiff is being represented by the big-time Philly firm Anapol Weiss, the same firm that successfully represented the NFL Players Association in their concussion lawsuit against the league. (Co-counsel is Ramsay & Ramsay, a West Chester firm.)

Also worthy of note: Because minors are involved, the Tredyffrin Police Department asked for and received a protective order in connection with the plaintiffs’ subpoena of its investigative files.

And the freshman player who brought suit?

Well, for the record, he’s one-for-one in civil suits against T/E.

He and his father successfully sued the district last year, effectively overturning a school district ruling that he was no longer a T/E resident and wasn’t entitled to a T/E-sponsored education. T/E had expelled the student and demanded the father reimburse it for the $13,000 it had paid for his education at Buxmont Academy, an alternative school.

This fall, he transferred to Valley Forge Military Academy where he’s listed on the football team roster. And where his $31,000-plus tuition is paid for by T/E taxpayers.

It boggles the mind that one young man is at the center of this whole sorry chapter in Conestoga’s usually and otherwise deservedly proud history.

He’s the plaintiff in the current civil suit.

He was the alleged victim in the criminal assault/hazing case.

And he was a juvenile criminal defendant in the earlier sexting/cyber-bullying scandal, arrested for distributing pornographic images in middle school.

Turning to happier tidings… Folks are turning out in droves to the new Turning Point in Bryn Mawr.

The upscale breakfast and lunch spot’s opening has been the company’s busiest in five years, GM John Pettinato tells SAVVY.

TP serves all-day breakfast, lunch and brunch in a sun-splashed corner of the rapidly filling Bryn Mawr Village. (Turning Point turned out so blindingly bright that shades are on order for the front windows, we hear.) 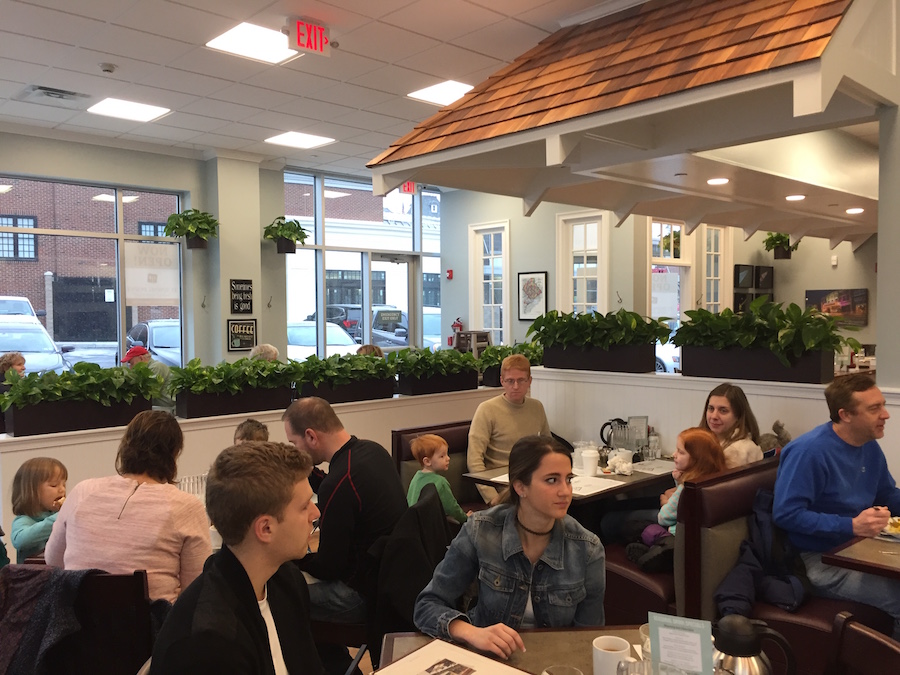 We stopped in for breakfast last Saturday and were mighty glad we did.

On the advice of Kim, our chipper server, we splurged on the Jamaican roast ­– $9.75 for a French press pot (with cute mini-hourglass attached) that’s more than enough for two. A silver carafe of the house blend is $4.95.

Kim also steered us to the egg skillet dishes, so we tried the Huevos Rancheros, a three-egg fiesta on a plate. Yum.

Other skillets worth savoring: the Popeye (spinach/mushroom/Jack cheese, $8.25) and the Wilbur (crushed bacon/avocado/tomato/jack cheese/potato, also $8.25).

Other thoughtful flourishes: the piping hot syrup (nothin’ says you don’t care louder than cold syrup on hot cakes), worry-free kiddie cups with lids and straws for hot chocolate, an icy water pitcher for the table that sits on a sweat-proof coaster.

The $10 TP Perk Card sounds like a decent deal: you get your $10 back on your next visit, plus assorted loyalty rewards and freebie drawings. 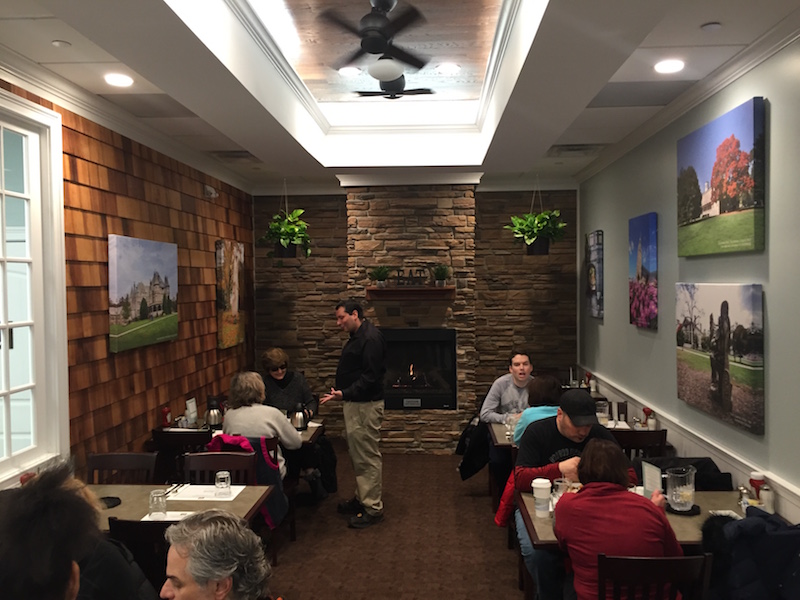 A cozy rear room can be reserved for groups anytime on weekdays (and only after 2:30 p.m. on weekends).

The Bryn Mawr location is the Jersey-based chain’s thirteenth.

Rumor has it that big-boy competitor First Watch once tried to buy out Turning Point. Based on our visit, it’s easy to see why.

A couple doors down, Solidcore, aka “Pilates on crack,” is also off to a solid start.

We chatted up clients leaving class last weekend and they sure sounded pumped. (And we’re pretty sure it wasn’t just the endorphins talking.)

Everyone works out on his or her own Sweatlana, a spring-based resistance machine. 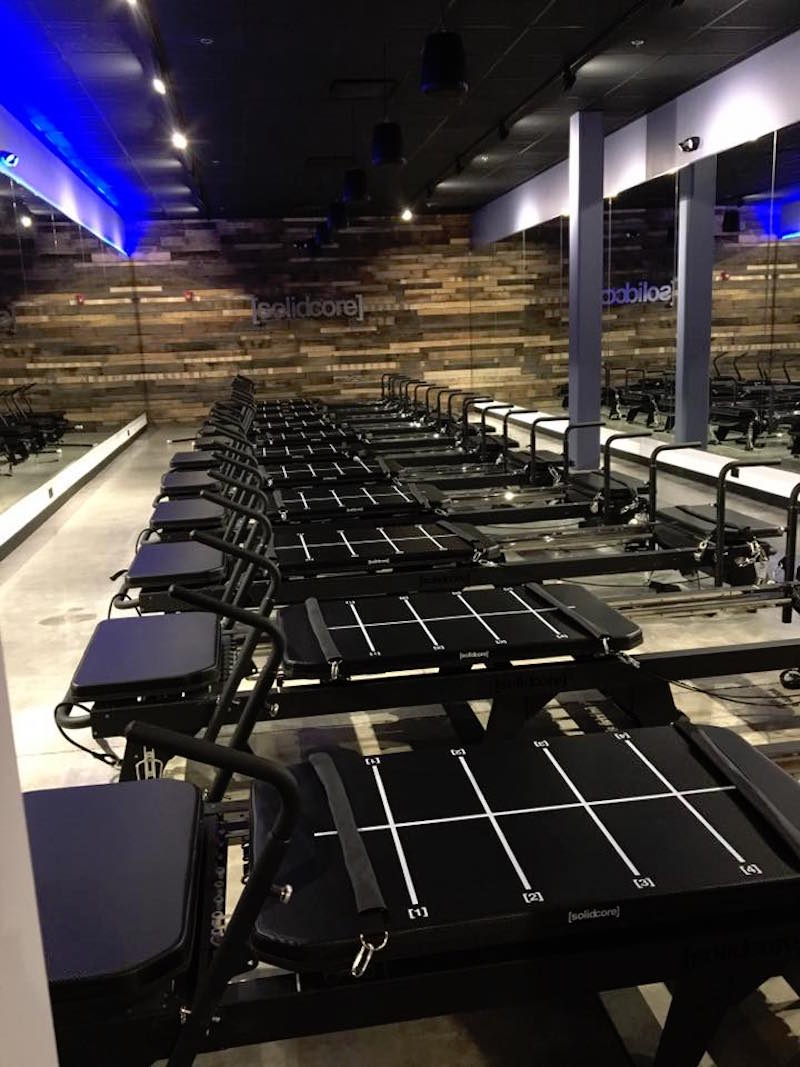 Although it’s not billed as a cardio workout, the sweaty red faces exiting the studio said otherwise.

Solidcore is all about slow and controlled strengthening, lengthening and toning. You know, the fun stuff: lunges, squats and planks.

The goal is to break down your slow-twitch muscle fibers during class and rebuilt them during the 24-hour after-burn. The company claims you torch 600 calories a class – and many more after.

Workout newbies, beware: If you can’t hold a plank for 90 seconds, you’ll struggle through a class here. (It’s not nicknamed SolidSore for nothin’.)

All ages – from teens through fit folks in their 60s – have been sweating it out in Bryn Mawr, according to instructor Kelly H. “We’re getting a lot of runners, triathletes and CrossFit people, too,” she says.

“Guys think it will be easy,” Kelly says. “But they come out saying, ‘Wow, that was mind-blowing.’”

Also mind-blowing: Bryn Mawr is Solidcore’s 19th studio and the company’s only been around three years. (There’s also one in Center City.) Clearly, they’re on to something.

Fun fact: SolidCore founder Anne Mahlum is the same spunky gal who, at age 27, founded Back on My Feet in Philly, a nifty nonprofit that helps the homeless run past their demons.

Among those checking out Solidcore are the forlorn ladies of Lithe.

The cardio/cheer/sculpt workout with a cult-like fan base abruptly closed its doors last month – in both Haverford and Philly – citing financial fallout from a legal dispute with a would-be landlord in NYC.

Since then, Lithe-ers have been scrambling to find new workouts and/or are taking Lithe classes online.

Among the distraught is Sandy Edelstein, who tells SAVVY she would be on such a high after her Lithe workouts that she’d routinely roll down her car windows and sing at the top of her lungs – bad weather, be damned.

“I felt like a teenager on the first day of spring,” says the 50-years-young Penn Valley resident. Her three years at Lithe got her in the best shape of her life, she says. “I’ve never felt so strong, beautiful and empowered. Lithe taught me to own my own flaws.” 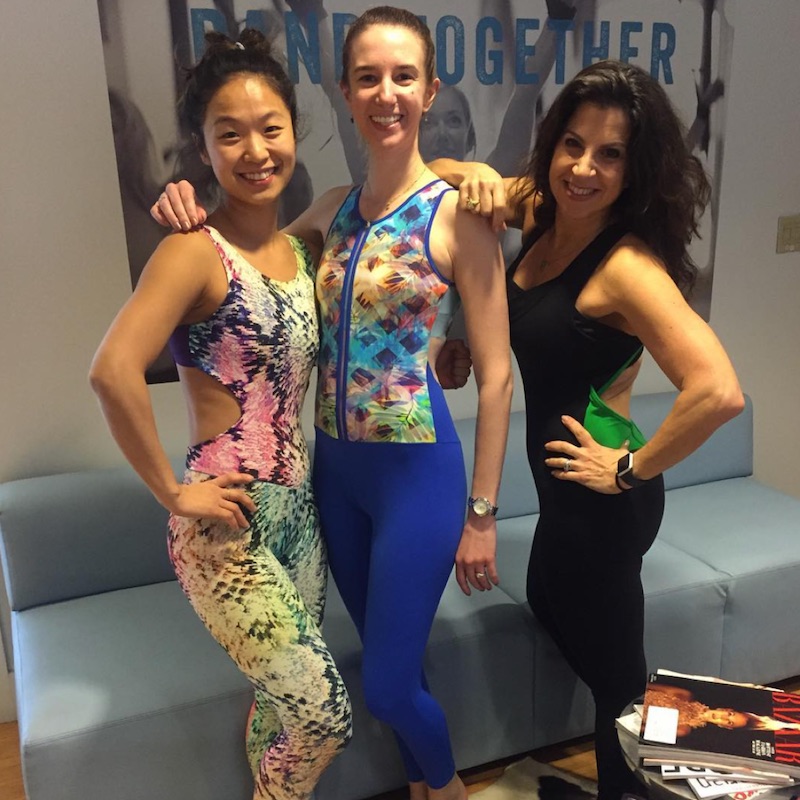 About the Lithe workout: “In one hour, you got a full cardio burn and safe sculpting and you never got bored.”

About Lithe founder, Lauren Boggi, whose company remains in legal limbo: “She’s a tiny firecracker; she didn’t have a typical fitness instructor’s body … Lauren created a “community of acceptance among women that was magical. She was a role model who showed us you don’t have to have the perfect body. You can be comfortable in your own skin.”

About her sister Lithe-ers: “We had a wonderful camaraderie; there was no judgment.”

Sandy was among those lucky enough to indulge in yearly Lithe-led “escapes” to Jamaica.

Helping ease their pain these days is a private Facebook group around 700 strong, she says. It’s a virtual hangout for commiserating, comparing notes on new studios, and above all, “keeping all these incredible relationships alive.”

In a testament to how much these gals miss each other, a happy hour in a private Main Line home is set for Friday.

No, the bereft ladies of Lithe will not go gently into that good night.

A quick crime note: Keep extra-close watch on your handbag at the supermarket.

Police are searching for a woman who twice stalked seniors at the Devon Acme and snatched their purses when their backs were turned. She pockets cash from the wallet, then ditches both purse and wallet in another aisle before brashly walking out. Caught on surveillance tape, the thief appears young, Caucasian and brunette. And she likes to wears sunglasses while she shops. 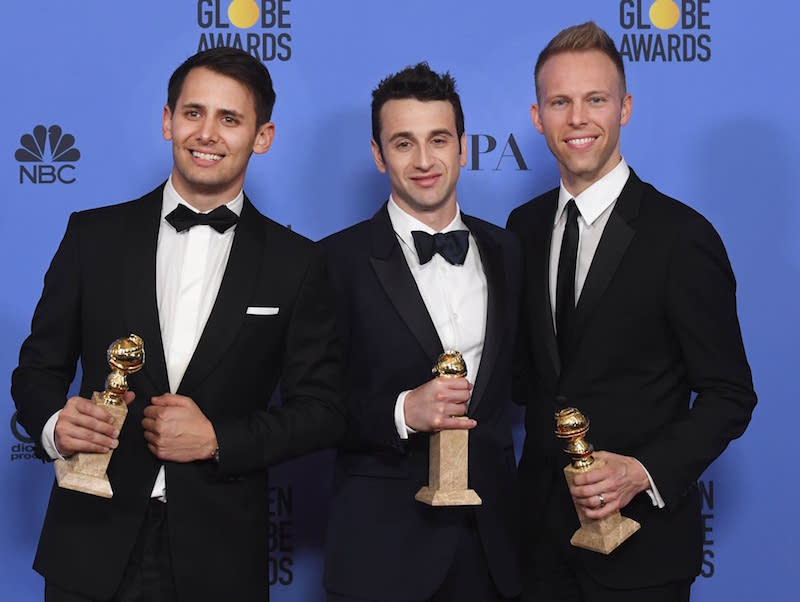 Not too shabby, right?

Along with collaborator Justin Paul, Benj is really on a roll.

The Pasek and Paul musical, Dear Evan Hansen, is a Broadway smash. The two Tony nomines are currently writing the music for The Greatest Showman, a circus film starring Hugh Jackman.