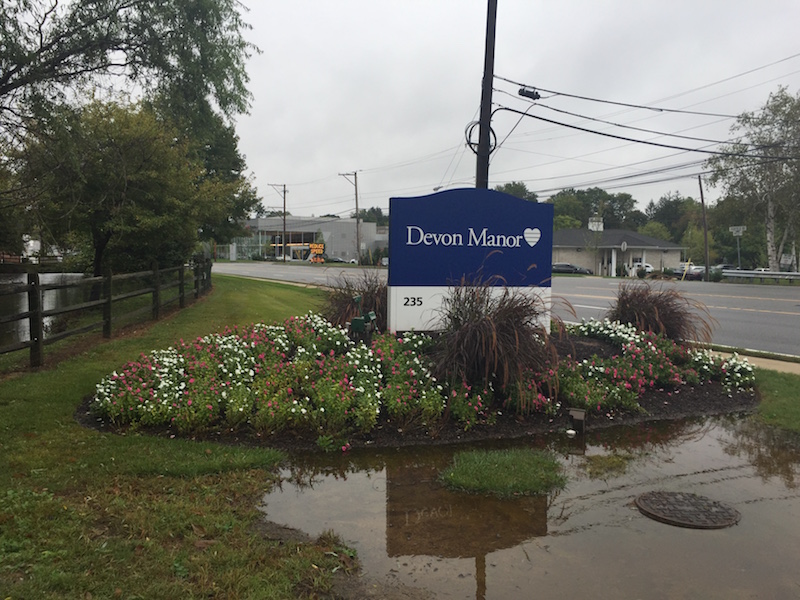 From Devon Manor to The Royal Devon?

Residents and patients are being relocated, 124 staffers are looking for new jobs, and Devon Manor goes dark next month.

This is prime real estate, folks – 8.6 acres with lots of frontage on Route 30 and a deep lot. And just a skip and a jump from the Devon train station. 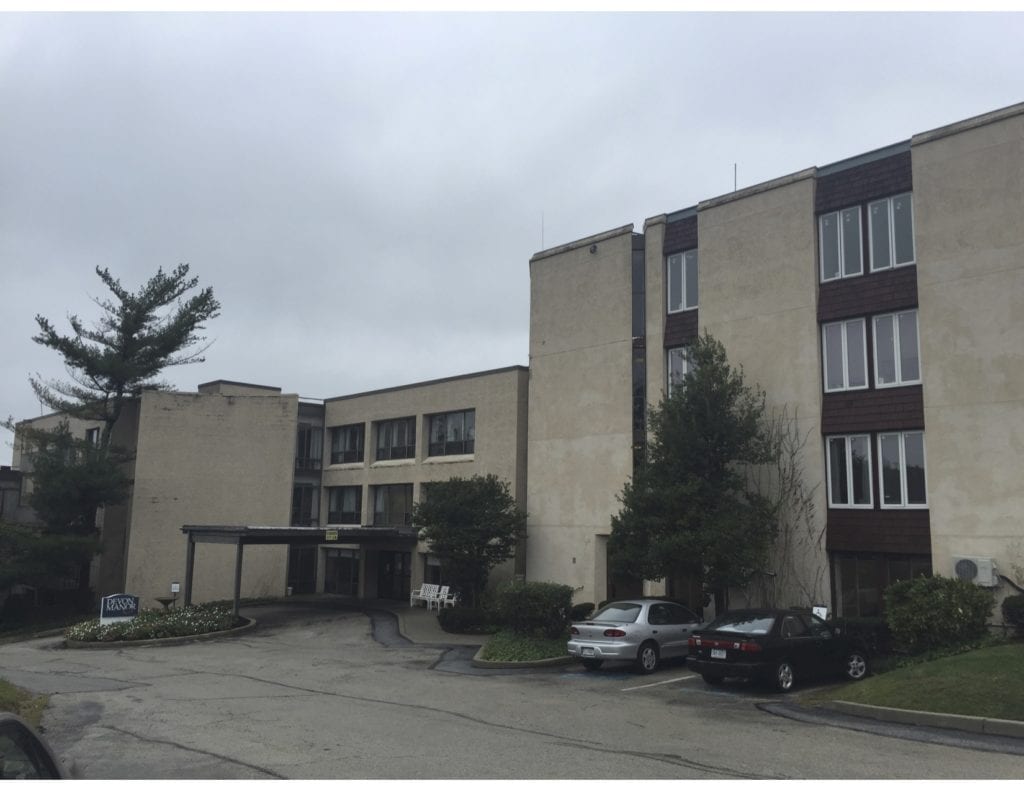 A small part of the expansive Devon Manor complex.

So what will O’Neill do with it?

“I’m working out township issues before I go public,” the King of Prussia-based developer tells SAVVY.

(Easttown Planning Commission Chair Mark Standish tells us he has yet to see a plan, btw.)

While we wait, let’s ponder the possibilities, shall we?

Stay tuned. This could get interesting.

Meanwhile, we have new intel on Devon Yard. 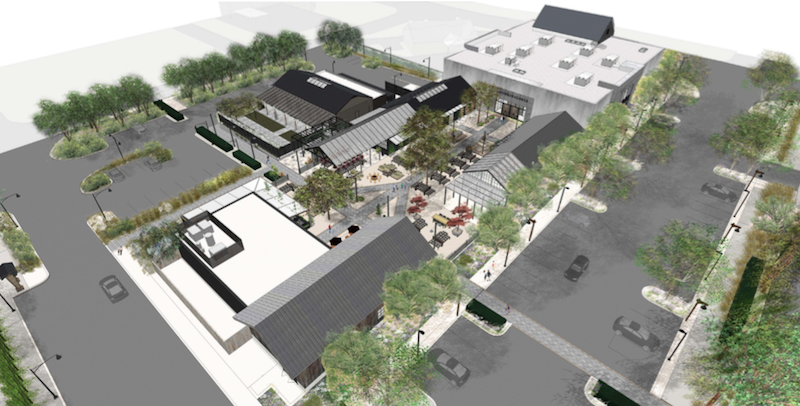 An aerial view of the latest plans for Devon Yard. Clockwise from top right: Anthropologie, Terrain and Cafe at Terrain, Pizzeria Vetri, Amis, and the new event venue.

A rendering of the view from Devon Blvd. 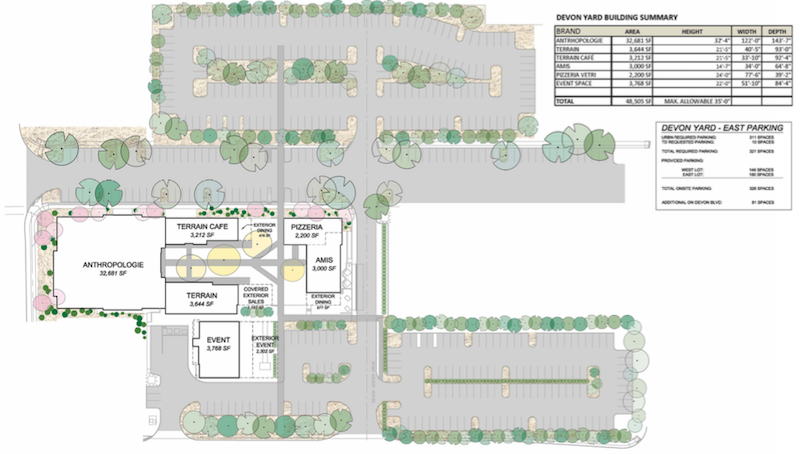 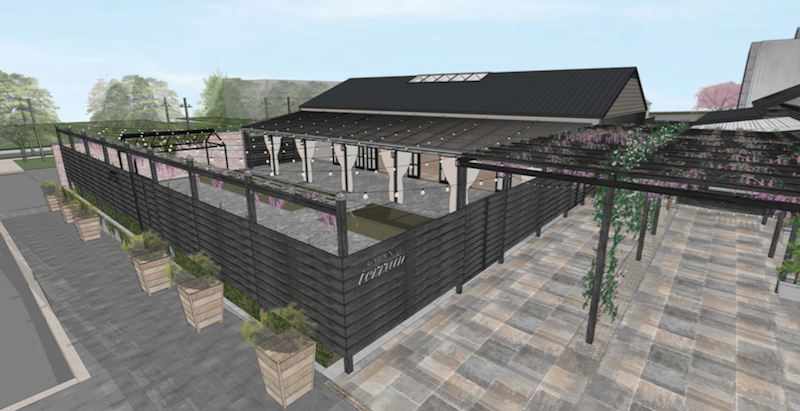 The proposed event venue and adjoining courtyard will be fenced off.

Because the township wanted to give folks time to digest it, no one at the meeting was permitted to say boo about Urban’s new plan Tuesday night.

But, given this community’s history, count on questions aplenty come Oct. 25, the night township planners will host a public hearing on Devon Yard.

We also got our first gander at redevelopment plans for the now defunct Fritz Lumber in downtown Berwyn.

The preliminary sketch plan for the redevelopment of the nearly two-acre Fritz site.

Eadeh is drawing on these photos as inspiration for its nostaglic makeover of the historic lumberyard.

We told you last time that the site’s new owner, Eadeh Enterprises, wants to put up three mixed-use buildings – with retail/restaurants on the first floors and mostly one-bedroom apartments on the two floors above.

Before Eadeh knocks it down, the Civil War-era lumberyard gets two curtain calls.

Unsold hardware and lumber will be auctioned off this Saturday, Oct. 8 at 8:30 a.m.

And the Tredyffrin Historic Preservation Trust is selling tickets to “Puttin’ on the Fritz … a Party in the Yard” set for Oct. 22.

The shindig will honor the Fritz family and raise funds for an even older property, the 18th-century Jones Log Barn. The Trust plans to rehab the Berwyn barn and make it the centerpiece of a Living History Center near Chesterbrook’s Duportail House.

While Easttown sizes up big changes for Devon and Berwyn village, we’re keeping an eye on hefty plans for a site just north of the Paoli train station in Tredyffrin.

Driving over the rail bridge, you can’t help but cringe at Station Square – four rundown and mostly empty office buildings at the corner of North Valley and East Central Ave. 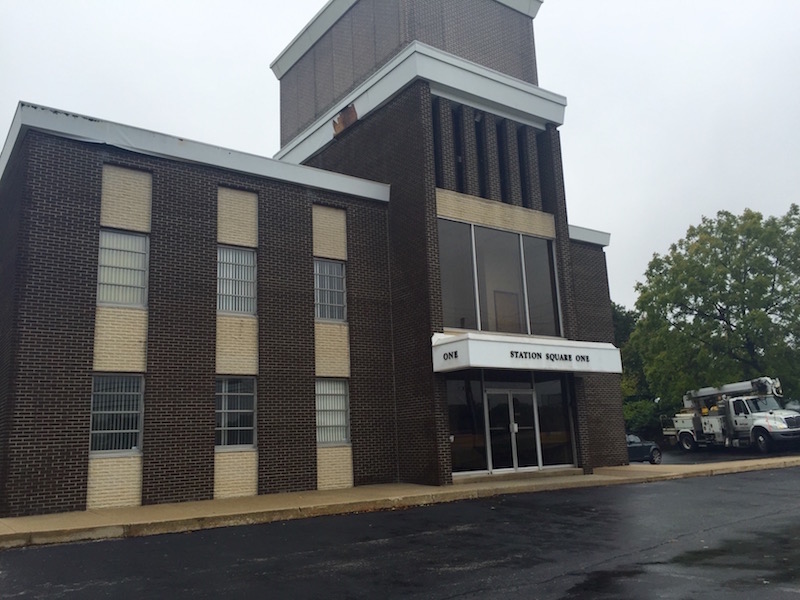 The office park’s owner has wanted out for a few years and it shows. The few diehard tenants are on month-to-month leases.

Tredyffrin is weighing a developer’s plan to raze the two-story buildings and put up three, four-story apartment buildings with underground parking and a pool in their place. 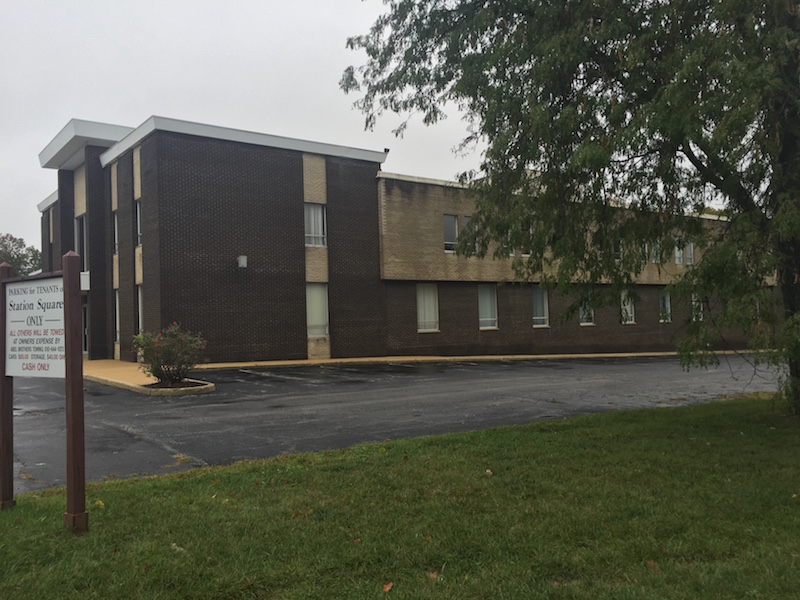 The current view of Station Square from E. Central Ave. 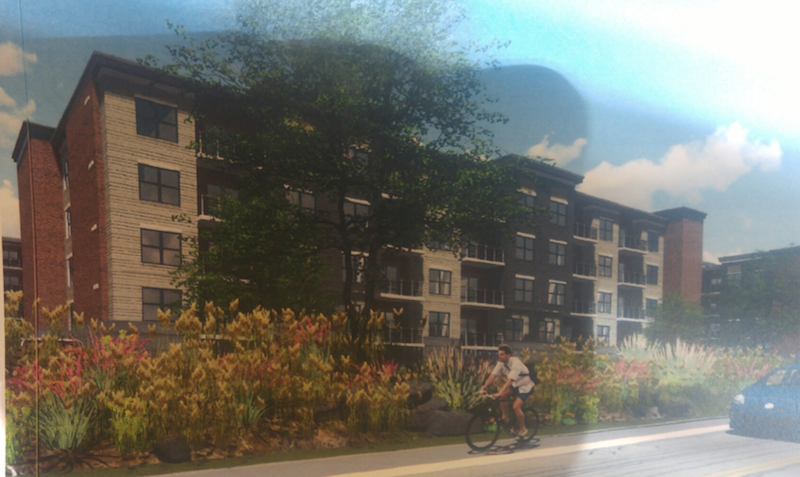 A rendering of view of the proposed Station Square apartments, also from E. Central Ave.

The developer, Linden Lane Capital Partners, claims it needs (among other zoning changes) a height bonus so it can put in the high ceilings its posh rental units require. Each would have a tiny (750 sq. ft.) office/retail on the first floor, technically making them “mixed use.”

While some salivate at the prospect of 153 new households patronizing Paoli shops, others are getting agita.

Folks in the adjoining Valley Hills neighborhood say the current proposal is too tall, too dense and too, well, ugly.

Not to mention all the traffic it will dump on their already stressed streets.

And the kiddos it could add to T/E schools.

The railed balconied buildings? They belong in Miami, not the Main Line, the neighbors say.

They completely understand the township’s desire for housing at the site (zoned “Town Center”) to support downtown merchants. But they’d rather see condos – and fewer of them, darn it.

Township planners have already given the plan the green light, assuming certain conditions are met. Now it’s in Supervisors’ hands.

After everyone speaks their peace – public hearings have spanned three meetings and counting, to date – the Supes will take a vote later this fall.

There go the brides.

The Van Cleve Collection, a Main Line mainstay for 30 years, is heading east.

The Paoli store that’s dressed mothers of the bride, society gals, prom queens, and since 2008, brides themselves, will move to the Paoli Design Center in December.

Deborah tells SAVVY she’s psyched to have “everything under one roof” and in a much newer building, to boot. Her current shop spans multiple floors in two buildings.

The bridal salon will get primo space fronting Route 30. Behind it, will be three “bridal presentation rooms,” i.e. large dressing areas where brides try on gowns and pirouette before their shopping pals.

Bridesmaids, MOB/black tie dresses, sportswear/informal dresses, accessories and custom alterations will each get their own rooms.

We lapped up the vittles at the new Fat Ham the other day. 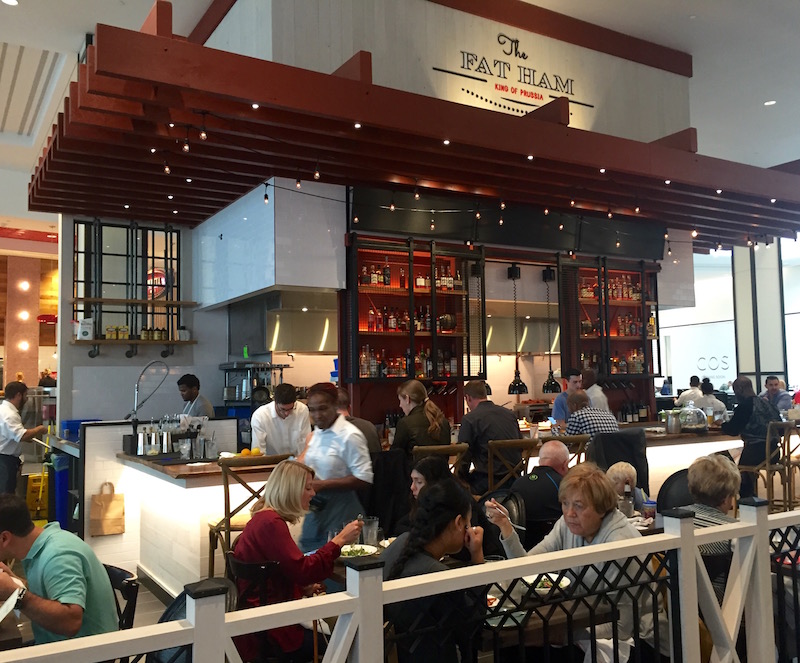 Good thing the plates are small ’cause the calorie counts are not.

We chickened out on the signature Hot Chicken ($16), sampling instead a less spicy bestseller, Shrimp & Grits ($18).

Rich, creamy and mighty tasty – even if we’d have preferred plumper shrimp, y’all.

As they bemoaned the calories, the couple next to us raved about their fried Chicken & Waffles ($16).

And my lunch pal was fairly happy with her smoked chicken chopped salad ($10) – although she virtuously skipped the best parts: the ranch dressing AND the bacon.

Smack dab in the center of Savor, the place is outfitted with red-stained rafters, string lights and “porch” railings. Their PR agent says it’s supposed to evoke a “clean, small-scale barn in modern Charleston.”

If you say so.

With faster food joints and shoppers bustling on all sides, sure felt like a kiosk in a food court to us.

But don’t be breaking out the bubbly yet.

To use the shoulders, they have to widen stretches of the highway and construction won’t begin for five years. Oh, and the project’s estimated $125 million tab is not yet funded.

The Blues Fest committee has agreed to find a new venue after the center’s merchants complained that the shindig was killing business on what should have been the busiest day of the week.

“We love the Blues Fest!” Paoli Village Shoppes owner Judy Huey tells SAVVY. But “the Blues Fest has outgrown us.” Judy says there’s no more room in her parking lot for new vendors or extra fans. And yes, the street fair’s growth has made the event “increasingly detrimental to our tenants.”

Finding a new home’s not going to be easy. Beer sales figure heavily into the Fest’s finances so it can’t just up and move to, say, Wilson Park, where such imbibing is verboten.

Seinfeld’s Soup Nazi will be hawking soups on the Main Line this weekend.

Actor Larry “No Soup for You” Thomas will show up in character and ladle free samples of Soupman, Inc. soups Saturday, Oct. 8 at the Paoli Acme from 11 to noon, the Devon Acme, 12:30-1:30 and the Goshen Acme from 2 to 3.

If you haven’t checked out downtown Ardmore lately, you might want to visit this Saturday, Oct. 8.

The town’s biz association is hosting an open house with food and Tired Hands (beer) tastings, live music, sidewalk sales, pumpkin decorating, magicians and other kids stuff, giveaways and more. And parking will be free all over town. Check in at Schauffele Plaza (14 E. Lancaster) to get a program and map.

Concihairge is offering free blowouts Friday, Oct. 14 at Scout and Molly’s Boutique in the Paoli Shopping Center. Book a time at [email protected].

A SAVVY salute to a Main Line soap opera legend.

Rosemont’s Agnes Nixon, 93, passed last week after a long and glorious career writing, producing and creating two of ABC’s most iconic soaps, both set in fictionalized Main Line towns. All My Children ran for 41 years and was set in Pine Valley, aka Bryn Mawr. One Life to Live, set in Llanview, aka Ardmore, aired for 43 years.

A pioneer in bringing hush-hush topics like cervical cancer, same-sex marriage and abortion to the small screen, Mrs. Nixon received a Daytime Emmy for lifetime achievement in 2010.

And finally, health tips for handling the tricky transition to fall.