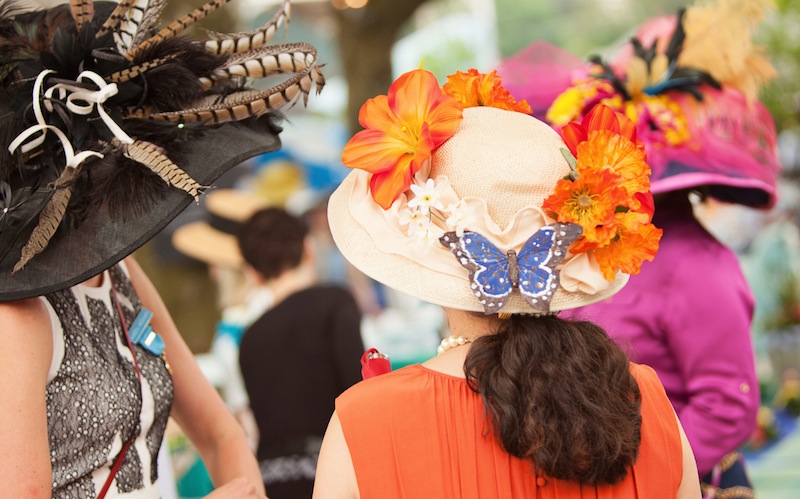 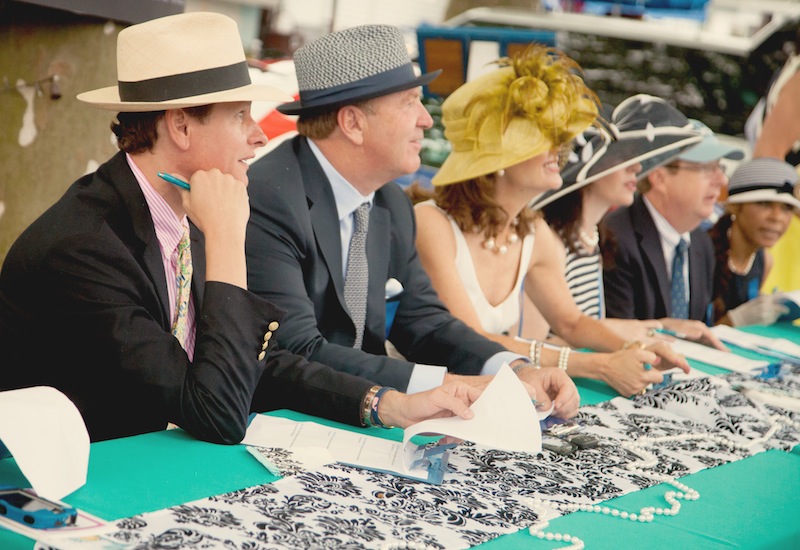 Last year, more than 100 women paraded before a panel of judges. Another hundred just watched – agog.

Jeeze, these ladies aren’t messing around.

Some are clearly in it to win it; others compete for kicks.

Because it’s tradition and it’s Devon and it’s kinda cool to pose for a gazillion pics so, sure, what the hey…

Over the years the faces become familiar.

You come to recognize the show ponies who’ve trotted to the winner’s circle once, twice, thrice, a half dozen times, even.

Gals like Robin Sweet, the Dallas-bred owner of Wayne’s Painting with a Twist.

Robin has been known to make a Texas-sized entrance. 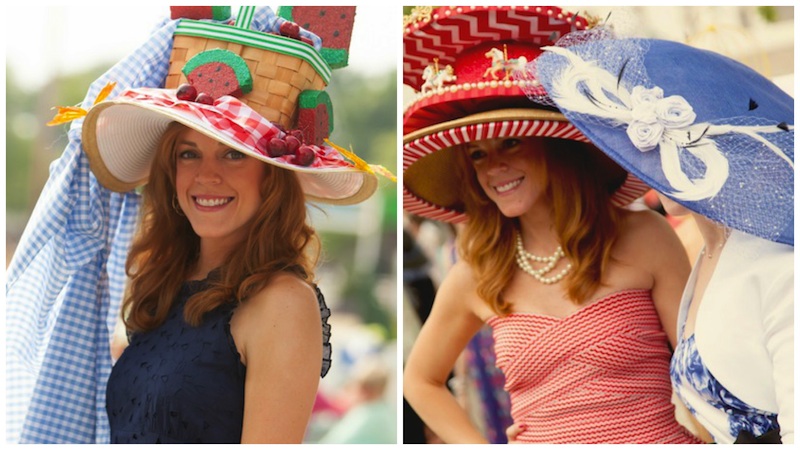 Her homemade hats aren’t ten-gallon, but whimsical and tall, they might as well be. Robin, who’s won twice in three tries, tells SAVVY she’s been working on this year’s hat for two months and “can’t wait to see everyone’s creations.“ 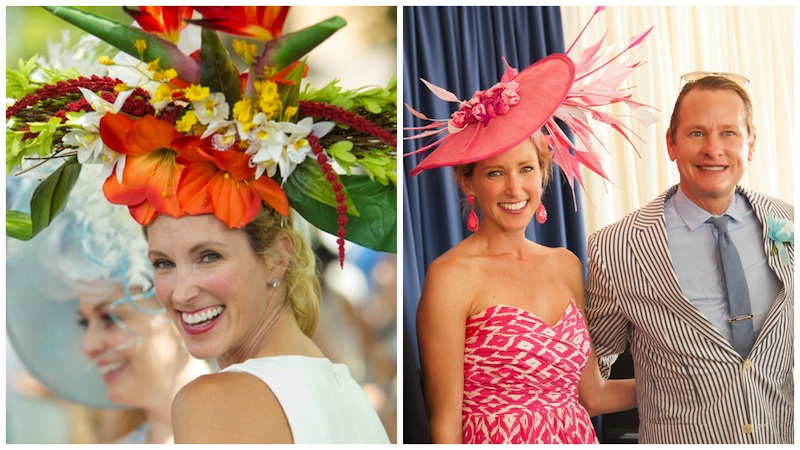 Devon gives Amy a chance to scratch the creative itch that her former law career never gave her. Whether she’s dressing herself for Devon, costuming her kids for Halloween or decorating her front door for a holiday, she’s always been a go-big kind of girl.

Like most hat contest winners, Amy’s a DIYer. She dreams up a design, forages for a form – Hello, Home Depot/Michael’s – then plays with it.

From stacked hat boxes to teetering tea cups to a cascade of flowers that looked real enough to sniff, Tiffany’s creations are marvels of elegance and engineering – as coveted as the jewelry store for which she’s named. 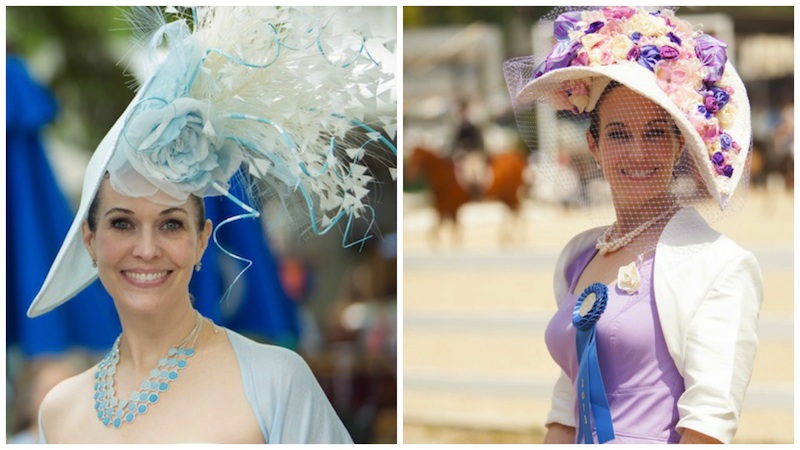 The Harriton alum and perennial Ladies Day champ fielded so many hat inquiries over the years that she launched her own millinery business last spring.

This spring Tiffany started renting select hats for around $60. Splendid.

A whiz at the head-to-toe turnout, her calling cards: timeless dresses, demure gloves, raven locks swept off the shoulders to keep the focus on the smashing hat and the dazzling smile.

A dark horse candidate: Another part-time milliner, Zoya Egan is a three-peater at the Radnor Hunt Races. Look for this tall blonde fabricator of fabulous fascinators to stand out this year – and not just for her stature.

A no-show (darn!): Fresh off a hat-judging stint at the Radnor Races, Milica Schiavio won’t be at Devon this year – she has a day job after all – but a few of her fiercely original hats may be. We know at least one will be modeled by her always glamorous mom. 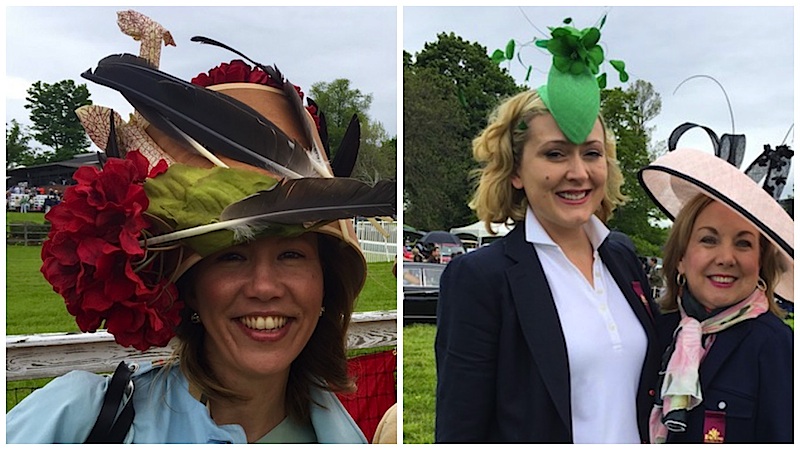 Hankering for a hat but short on time and, uh, resources?

That’s Hats in Chadds Ford is the only store in the western ‘burbs that trades almost exclusively in toppers.

Helping cancer patients is especially gratifying. “A brighter lipstick, a touch of jewelry and the right hat can create the illusion of hair,” Debbylynn says. 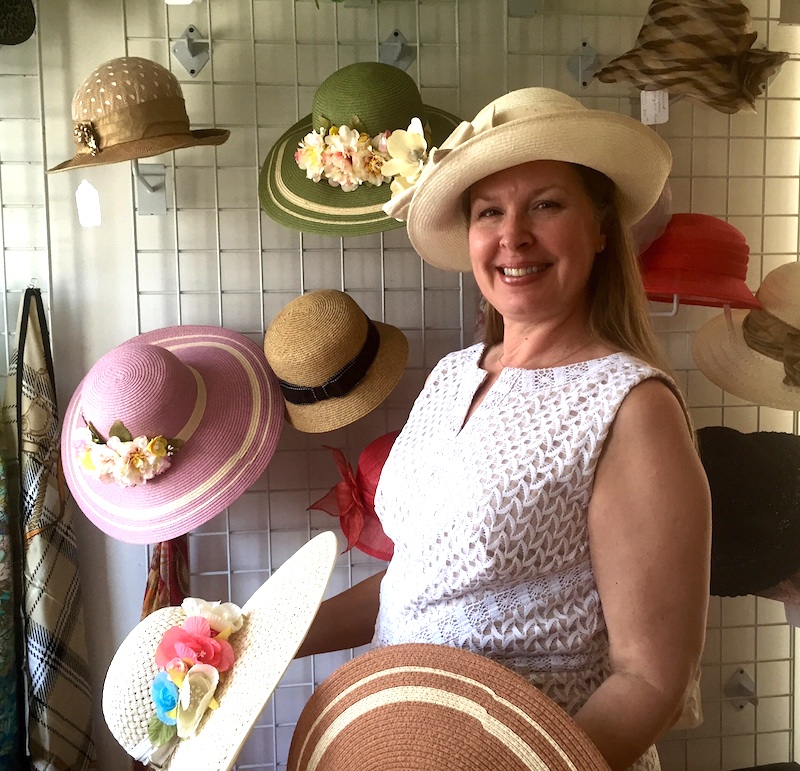 Her store offers what Etsy can’t: a custom fit and style advice, she says.

Bring in your dress and she’ll find a hat that suits your face shape, your coloring, your height and figure. She’ll affix custom trims and size it to sit comfortably, keeping “unattractive fidgeting” at bay. A trimmed bonnet can be had for under $100.

Closer to home are the Devon Country Fair’s pop-ups.

Polka Dots, the Paoli boutique that’s one of the fair’s busiest booths, sells dramatic yet affordable hats for under $70..

Meanwhile, the horsey set swears by Hats by Katie. After all, its owner is one of their own.

Katie Whaley has represented the U.S. in four world carriage driving championships and is the reigning 2015 USEF national pony pair driving champ. (Alas, her hat booth became so busy, she stopped showing at Devon 10 years ago.)

A 26-year fixture at the Devon Country Fair, Katie says it’s not unusual for gals to check out the formidable competition on Ladies Day morning and to trade up to one of her custom creations. 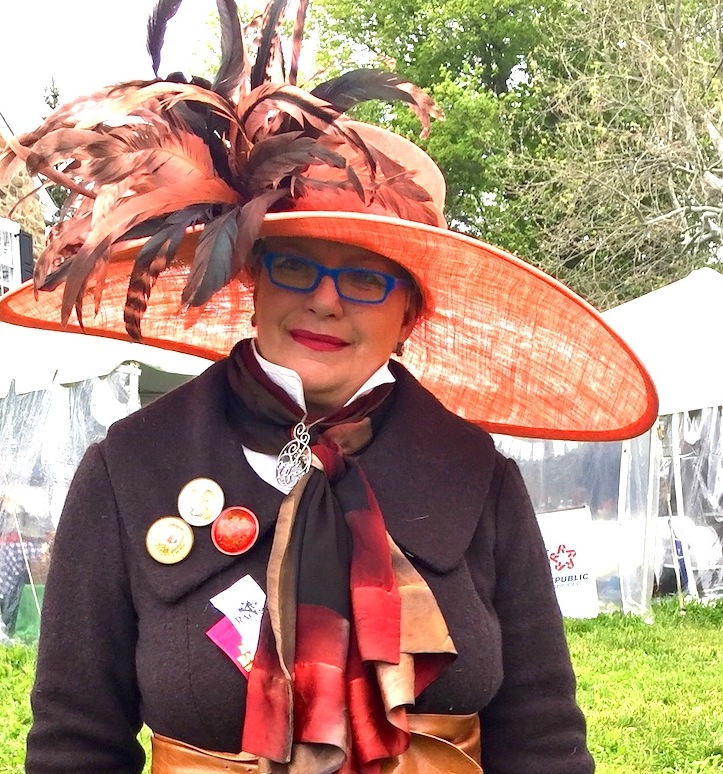 PR gal and Hats by Katie fan Sarah Doheny at the Radnor Races.

“I never make it out of the booth for the contest – they come in here fast and furious.”

Expect a wide selection of jaunty hats, many with prominent plumage – along with frank advice, even if it’s not always heeded. Fascinators start at $125, dress hats around $250.

This year’s hat trends: Milliners tell us American gals are still fascinated by flirty fascinators (the Brits have moved on), but wide brims are big again. So are pastels – especially pink, butter yellow and pale blue – along with navy. Got that?

GO FOR IT! The Ladies Day Hat Contest will be held Wed., June 1 on the horse show grounds. Click here for prize categories and to order tickets: $65 in advance, $80 at the gate. Registration begins at 9:30. Contest is at 10:30. Tickets include contest entry, champagne reception with cocktails, lite bites, live music by Vahe, generous goody bags and five raffle tickets for prizes donated by every Country Fair vendor. Rather just people watch? Wear an elegant hat for free admission to the show grounds on June 1 until 1 pm.

On to weightier stuff….

About 100 people – of various creeds and a few colors – turned out for a Main Line Town Hall on Racial Justice with Anita Friday last week. 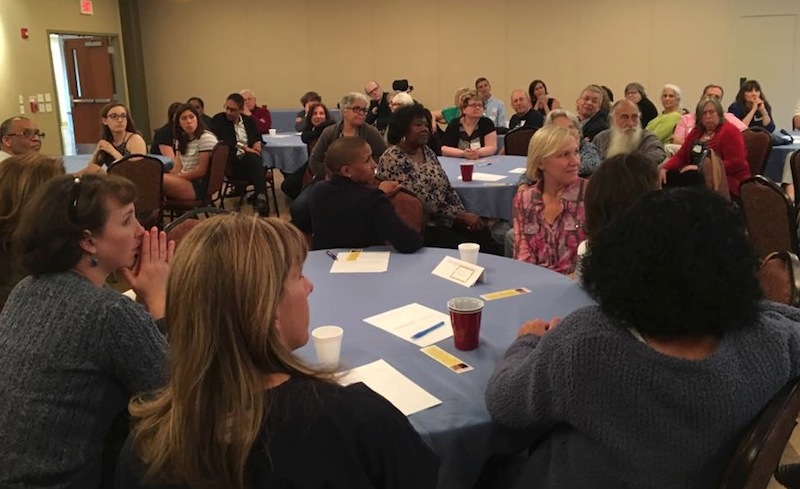 Anita Friday, you may recall, is the Berwyn mom who cried foul when a woman in the Greens of Waynesborough followed, videotaped and called the cops on her twin African American sons because they were bicycling through her neighborhood wearing backpacks.

Since last summer, Anita has been shining a light on racial injustice, asking the Main Line to look inward to examine its biases.

A former attorney and woman of faith – the Fridays are one of the few black families at St. David’s Episcopal Church in Wayne – Anita feels she’s been called to advocacy. In the last several months, she’s led “courageous conversations” at her own church, at Wayne Presbyterian, and last Thursday night, at the Malvern synagogue, Beth Chaim. 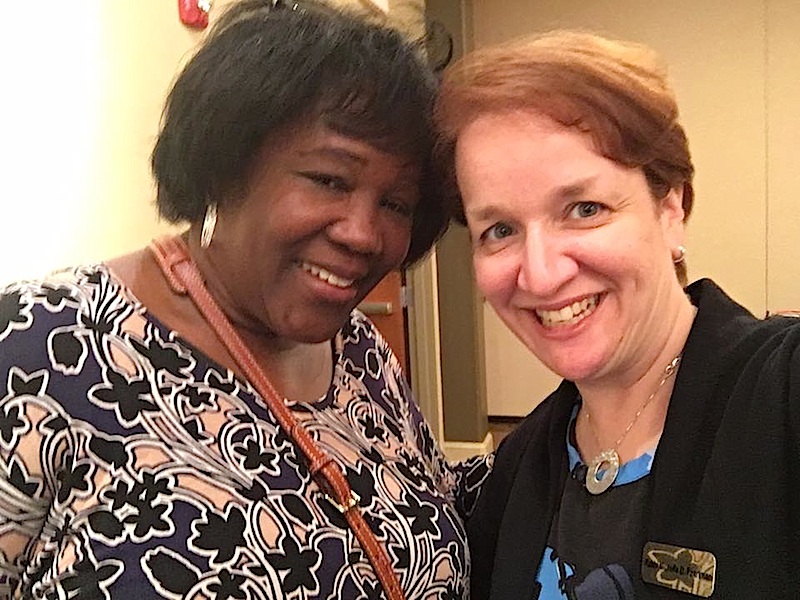 Among the town hall’s memorable moments (after Anita’s compelling presentation):

After the meeting, two 2015 Conestoga grads and a Great Valley senior talked about how their high schools were segregated – unofficially, of course. With few exceptions, black students hung with other blacks. Whites with whites. Anita encouraged the students to form a STAR (Students Talking About Racism) chapter on their campuses, a club her boys created at their own schools.

In truth, the Fridays are stirring a cauldron some would rather leave untouched.

The Main Line is, after all, a place where a “Black Lives Matter” sign outside a Wayne church can cause a mini-firestorm.

Where blacks, when pressed, will tell you they’re routinely stopped by cops and followed around stores.

Where claims of racial profiling on our leafy streets are met with surprise among whites (Really? Still?), but among blacks, shrugged shoulders. (Well, duh. It’s our reality.)

In a voice just above a whisper, Anita Friday nudges gently: “How many times have you had a black person in your home? How many times have you taken your kids to the city to see what’s outside the bubble?” She’s not asking for a colorblind world but a color-full one, where every race, every culture is celebrated.

Beth Chaim Rabbi Michelle Pearlman had the same message but hit harder: “We benefit everyday from white privilege and we don’t even know it. We need to out the fact that we benefit from racism.”

Always cross at the crosswalk. That’s the tragic takeaway from the death of a Cabrini College professor, just 51 and a father of three, in downtown Wayne Saturday night. Biology professor David Dunbar was hit by a car as he crossed Lancaster Ave. near the Anthony Wayne theater to reach his car parked on the other side of the street. It was raining hard and Dunbar didn’t use the crosswalk and crossed against the traffic light, witnesses say. The driver, a 65-year-old from Chesterbrook, is cooperating with police.

How’s this for ingenuity? A National Honor Society senior at Sacred Heart in Bryn Mawr has started a GoFundMe to pay her overdue tuition.

Marian Rosario says her family has fallen $8,000 in arrears due to divorce, deaths unemployment and other hardships. If her balance isn’t cleared, she will be “unable to graduate,” her page states. At last check, 71 do-gooders had donated a total of $4,500 since May 11. Got extra cash? Go Fund Her.

Glorious news. First Watch, the upscale daytime café, opened this week in the new Villanova Center. We’ve been pining for First Watch pancakes since our first taste in Wynnewood.

Last week we told you Bluefin was headed to Bala Cynwyd(!) This week comes word that another sushi standout is swimming the same way.

Jason’s Toridasu (Japanese for “takeout”) has been a smash since its debut last June on Rittenhouse Place in Ardmore. 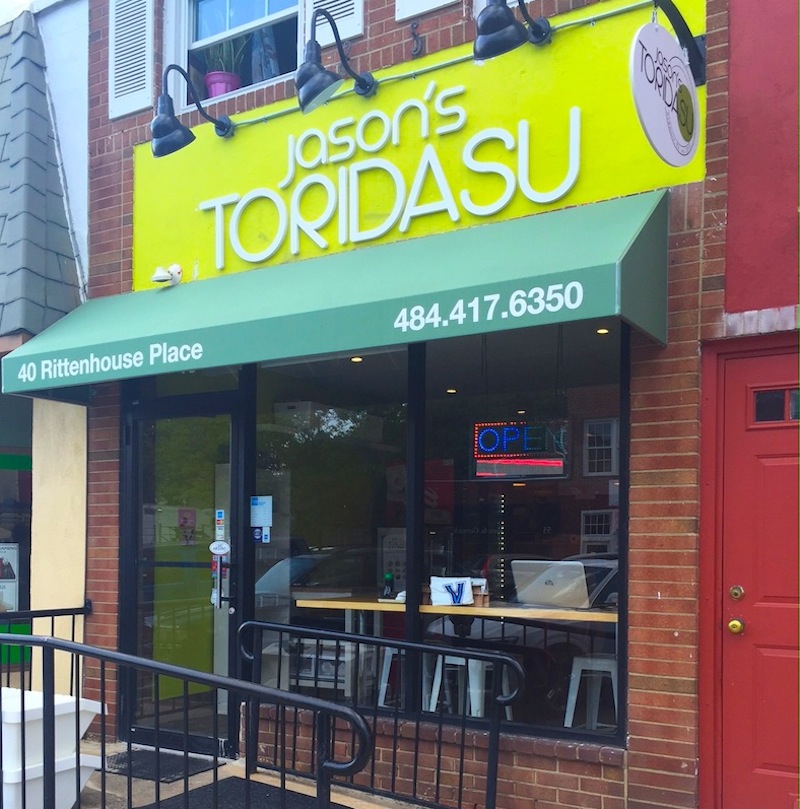 An overachiever, Jason will open a second, supersized sushi spot in the new Presidential City across City Ave. in late summer. He’s also scouting sites in Bryn Mawr and perhaps, one day, Wayne.

Jason says his secret sauce is head chef Inil Kim (no relation) whom he lured away from Pod.

To show his appreciation for his warm Main Line welcome, Jason will mark Toridasu’s one year anniversary in Ardmore with a $10 gift card giveaway the last week of June.

Parlour in Suburban Square, successor to St. James, has closed after a 15-month run. Gift cards will be honored at Rouge, Parlor owner Rob Wasserman’s other restaurant on Rittenhouse Square.

We’re pleased as punch to report that an unnamed eatery is headed to the old Ella’s Bistro space in Devon Square. Details TBA.

Staying put this weekend? In case you hadn’t heard, there’s a horse show in town. And not just any show. The Biggest and Best Outdoor Show in the U.S.A. Just ask the out-of-town riders – they’ll tell you Devon is their fave show on the circuit, bar none.

So, do take advantage of a world-class good time in your own backyard. From May 26 – June 5, the joint (and the ponies) will be jumping, the shops open, the ferris wheel turning and the lemon sticks just lookin’ for a lickin’.

Another alfresco event: Phila Flea Markets – better known as Philly Flea – is coming to Ardmore this Saturday (May 28), thanks to the Ardmore Initiative.

About 30 vendors of vintage and antique treasures will set up a giant flea market in Schaufele Plaza (16 E. Lancaster Ave.), 8 a.m. – 4 p.m.

We LOVE Philly Flea in Center City, so we’re psyched it’s made it out to these parts. Good stuff.