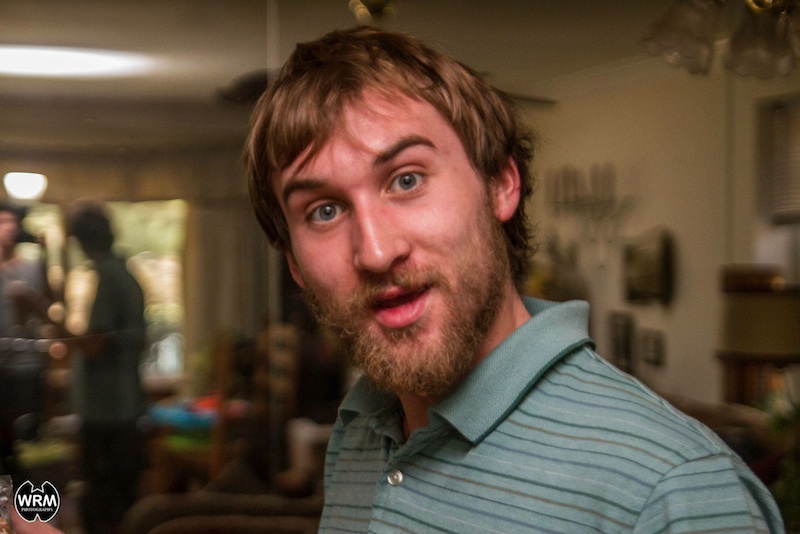 The late Tyler McCloskey. Photo by his brother, Reilly.

The Tredyffrin and Conestoga communities are mourning yet another young life tragically lost.

Tyler McCloskey, 22, died of an apparent heroin overdose over the weekend.

Tyler was the younger brother of Reilly McCloskey, the 2010 Stoga grad/photographer who only a few weeks ago shared his own addiction struggles with SAVVY Main Line. 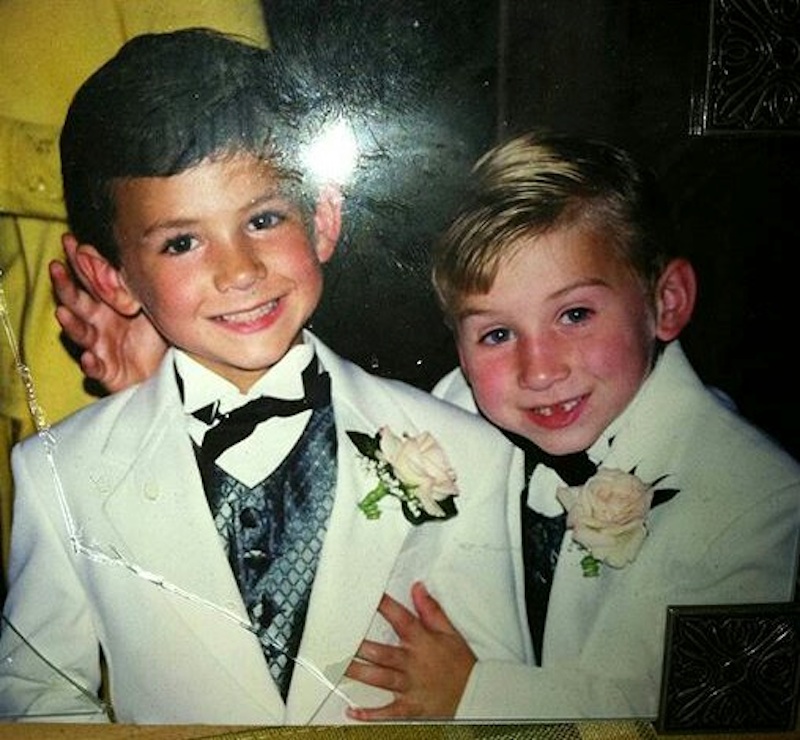 Reilly and his fun-loving younger brother, Tyler, in happier days.

Two years behind his brother at Stoga, Tyler was found unresponsive in his mother’s Wayne home Sunday afternoon.

“We’re all numb,” said Susan Randels, Tyler’s stepmother and the owner of the Paoli boutique, Polka Dots. “He should have been in rehab [again] but he wouldn’t go,” Randels told SAVVY. “We were all waiting for a phone call [like this]; he had it so bad. Even with his friends dying, nothing clicked through to him to make him want to stop.”

Fearing his brother would accidentally OD, Reilly begged Tyler to go to rehab. “He told him he had a bed [in rehab] for him,” Randels recalled, but Tyler refused, telling Reilly, “I just want to get high.”

Five of Tyler’s close friends have died of heroin overdoses.

“This has to stop; it’s ridiculous,” Randels said. “How many kids in their early 20s have to die?”

Tyler would be clean and sober for two months then relapse, his stepmother said. “He could never make it past two months.”

She blames no one for Tyler’s death. “How can you babysit a 22-year-old?”

Excited to start a new job at PacSun in the mall, Tyler had recently “cleaned himself up and shaved and then he went on a bender,“ she said.

“People don’t understand how heroin works,” Randels said. “It takes over. It gets inside your head; it talks to you. It tells you that you want it.”

Adding to the danger is the toxic stuff that heroin’s often laced with. “There’s such bad stuff out there,” she warned.

Young people accidentally OD because they stay off it for a while, and when they relapse, they think their bodies can handle the same amounts they were accustomed to.

Ask any cop or recovery specialist: Addicts aren’t out to die; they just want to get high.

Tredyffrin Police Chief Tony Giaimo says OD deaths are trending downward but opiate/heroin addiction remains a major issue in his township and in townships across the state.

He says having his force carry Narcan, which revives opiate overdoses, has helped cut the death rate. He says, too, that his force is aggressively going after area suppliers. Usually cops can trace an addict’s favorite dealer through his/her cell phone. “We’re turning the tide, which is great, but two deaths last year is two too many.”

“There’s a great deal of over-prescribing going on,” Giaimo says, with docs writing scrips for oxycontin after even minor oral surgery. Oxy and other opiates lead to addiction, which leads to the cheap heroin bag that’s just a short ride away in Kensington (or closer). Eighty percent of heroin users started with opioid pain meds, according the the CDC.)

Still, Narcan and dealer arrests didn’t save Tyler McCloskey, the “sweet and amazing little boy” who would eagerly climb inside kitchen cabinets to help his stepmom clean them.

They didn’t save his lost friends who knew how to revive each other but, tragically, couldn’t revive themselves.

And they didn’t save all the would-be Tylers out there, in Tredyffrin and beyond, who refuse rehab, who run away, who steal from their own parents and their neighbors, who sell their souls even, to fuel that next unholy high.

“Tyler had a big personality and a million friends,” his stepmother said. He started doing drugs in high school and never really stopped. “Once you do it, it takes over your life,” she said.

Randels is grateful for one thing; the heroin stigma is just about gone. “It used to be that you’d think that anyone who did heroin was disgusting,” she said. “Now people are finally admitting it’s in their families.”

(What she could have said, too, is that it’s families like hers and the Deckers in Gladwyne who are bravely paving the way.)

Randels said she and her husband, Jim McCloskey, who is Tyler and Reilly’s father, will start going to meetings for the parents of addicts at Rosemont’s New Leaf Club. “The only thing we can do as a family right now is see if we can help someone else going through this.”

A loving memorial service for Tyler McCloskey was held April 6 at Wayne Presbyterian Church.  The church overflowed with mourners. In lieu of flowers, contributions in Tyler’s name may be made to the E. Chelsea Campbell Memorial Foundation.  Chelsea, also a Conestoga student, died from a heroin overdose in 2005 at age 18. The foundation supports young people in the prevention and treatment of substance abuse. 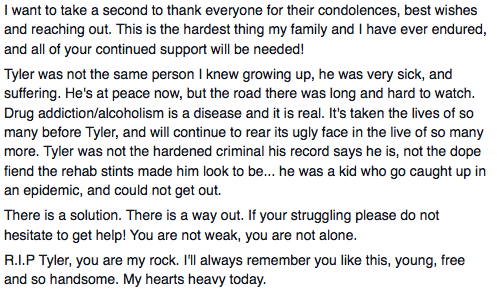 In much, much brighter news:  The Colonial Theatre in Phoenixville is about to shape shift and swell – sort of like “The Blob” in the sci-fi flick for which it’s best known.

Not only will the shabby-chic old gal get a facelift and major body work (once a Vaudeville hall, she’s 113 years young, after all), but she’s also making bold, frisky moves next door, adding two new, more intimate theatres, a lovely rooftop terrace (city views!), a gorgeous, spacious skylit lobby and skywalk, a legit concession counter and a grab-bag of behind-the-scenes gizmos.

A rendering of the spacious new lobby, relocated to the bank building.

But we’re calling it a Total Body Takeover/Makeover – has more of a sci-fi ring, no?

Whatever you call it, it’s a hugely ambitious project. The BIGGEST in the theatre’s long and storied history. 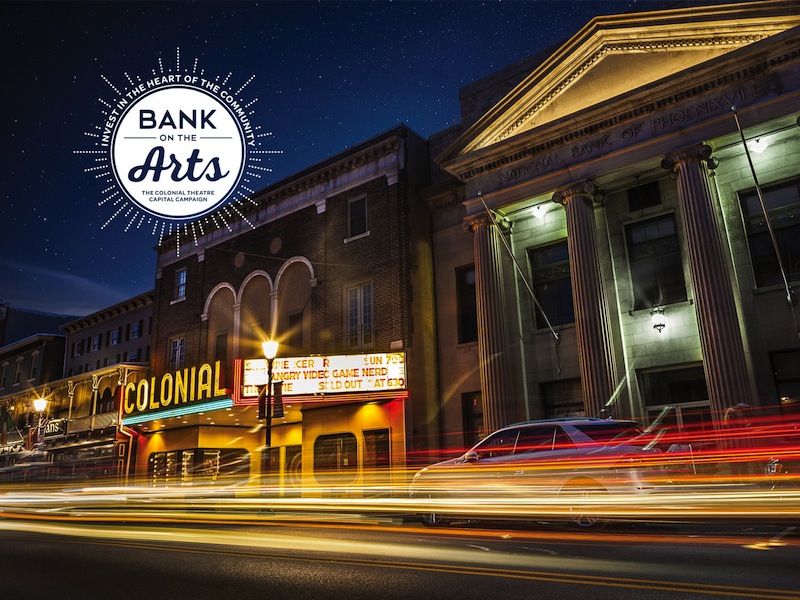 The Association for the Colonial Theatre, aka ACT (the nonprofit that owns the theatre) expects the completed expansion will triple its patrons in three years. Cue “Bravos!” from downtown restaurants and shops.

Best yet: When all three theaters are up and running, the Colonial will show a lot more first-run independent films. So if the Bryn Mawr Film Institute (BMFI) is a haul or isn’t showing your flavor flick, you get a Plan B, in a cute town, to boot.

Also in the offing: An application for a performing arts beer and wine license. Liquid gold right there, folks.

A good sign: Nearly $5 million of the $8 million campaign has already (quietly) been raised. Nice.

Star power: Honorary campaign chairs are The Bacon Brothers, Kevin and Michael, aka the bros who semi-saved the theatre’s bacon nine years ago when they raised $37K to build a special events/screenings/classes space on the theatre’s third floor.

Fun facts: The ACT bought the historic landmark bank building five years ago – a steal at $700,000 – from a cash-strapped newspaper chain (surprise, surprise).

Less fun: Foote tells SAVVY the original, turn-of-the-century theatre, will likely close for four months to allow for extensive renovations when Phase 2 rolls around. No surprise ’cause facelifts always mean down time.

Here’s how to show ’em you’re psyched for the bigger, better, but still historically cool Colonial:

The new luxe theatre will be used for intimate shows, events and screenings.

Out of sight, poof and they’re gone!

Our Week in Crazy: First a couple of loonies try to steal a dog from an Ardmore man’s front yard, dognapping apparently being a thing in Montco of late. Or so say the anonymous warning signs posted around town. (Beware tan sedans rollin’ round your neighborhoods, folks.)

Then, an infant is snatched from his stroller at the K of P mall Thursday night. The Amber Alert sounds far and wide, and police find the lady ’napper and abducted babe in an apartment above a Wayne barbershop – Thornton’s Barbershop at 932 Upper Gulph Rd. in the Wayne panhandle, to be specific.

It’s legit now but when it was the Heads Up Hair Studio, it was a front for a huge cocaine trafficking ring. When the news broke last Friday, the owners of Thornton’s posted this on Facebook: 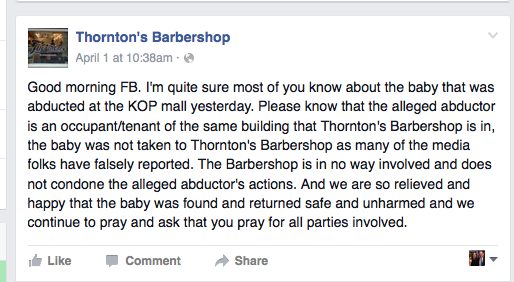 But wait, it gets worse (like, National Enquirer-worse): The 32-year-old kidnapper turns out to be the daughter of GOP bigwig Renee Amoore. An accomplished lady and speaker, she’s deputy chair of the PA Republican Party, owns the Amoore Group in King of Prussia and is frequently feted by civic and philanthropic groups.

Meanwhile, back at the jail, sits Renee Amoore’s daughter, Cherie, after she failed to post $500K bail. She claims she was heartsick over having lost her own baby (alleged to have been born in February) and impulsively lifted the baby from the stroller of a woman she had just befriended at the mall. Five hours later, Cherie Amoore, was found with 7-week old Ahsir Simmons, freshly bathed and PJ-ed in her Wayne panhandle apartment. Cherie was in a relationship with the guy who lived in the apartment above the barbershop.

No word on why her mother called her Cherie Amoore, but those Stevie Wonder lyrics sure give pause. It’s as if she were living out the song: “Pretty little one that I adore … how I wish that you were mine.”