Brought to you by our friends at Lifestyle Changes LLC

Hey, Adults: you failed the kids in your care.

That was the bitter takeaway from an impassioned public meeting on hazing at Conestoga High School Monday night.

What school officials got instead was an earful: an ardent defense of ousted head coach John Vogan and his staff and a lot of lip about how adults – from the DA to the district – had let kids down. 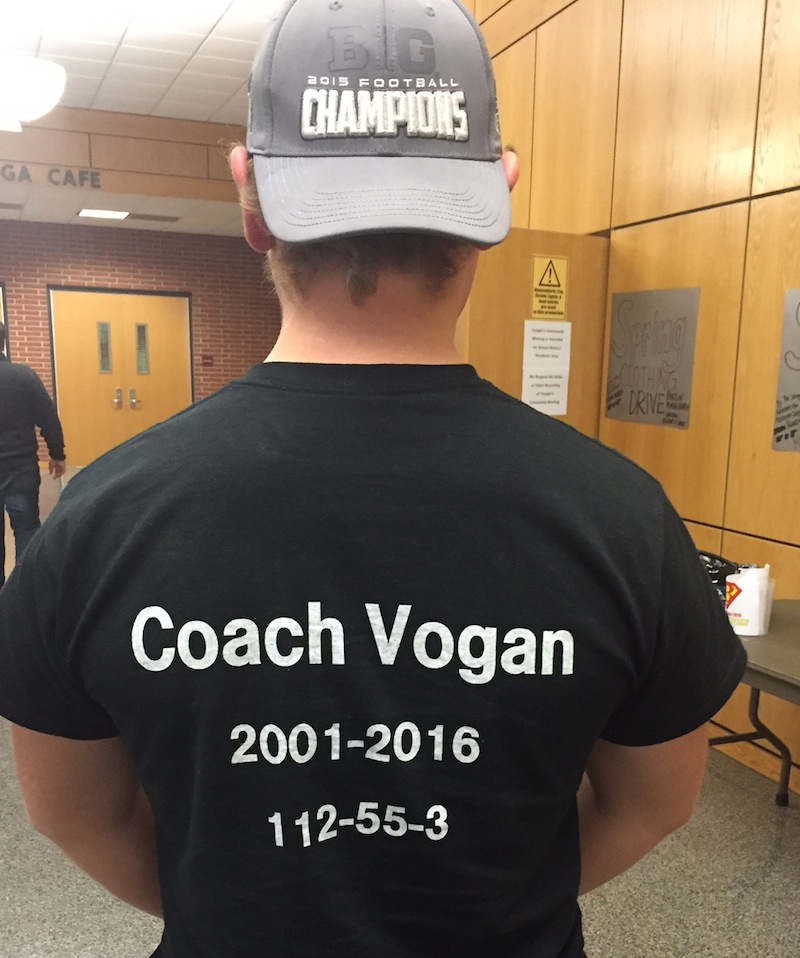 Conestoga junior Clayton Hofstetter sports a t-shirt he designed in support of his former coach at the public meeting.

Indeed, former Coach Vogan’s ears had to be burning as assistant coaches (now fired), parents and current and former players rose to his defense.

More than 150 T/E folks showed up at the public meeting, 27 of whom lined up to speak.

Starting the fireworks was fired 13-year assistant coach Tom Batgos, who played Stoga football 40 years ago alongside Vogan and whose son played eight years ago. Batgos lamented the “sensationalistic image” of Vogan “portrayed to the media,” which he says “pounced” on Vogan, a coach “who has changed many lives for the better.” He talked about how Vogan has long (and famously) welcomed Sonny DiMartini, a young man with Down Syndrome, to his teams. He mentioned how, on Senior Night, players routinely “choked up and cried” (happy tears) about their Conestoga football experience under Coach Vogan.

After that came a series of concerned folks posing questions and pointing fingers:

Meisinger: We will work with the captains of all teams to install “best practices” as recommended by outside expert(s) still to be hired.

T/E planned to post the new position pronto and a committee of 12-15 will handle hiring. The new coach picks his own staff (5 assistant coaches). Fired assistant coaches can re-apply for their positions for the following fall season.

Although the school district can’t comment on disciplinary action, Meisinger said staff will “work with families to support” returning students. (According to the parent, the accused seniors were suspended for five days, then suspended again for another five.)

Meissinger: “We need to look at the whole school community.” Figuring out why no students came forward to tell adults about the hazing in their locker room is a “priority piece” for the school district.

Meisinger: “I’m sorry this has continued to be a burden for you to carry. You should be proud to walk onto the football field as Conestoga players.”

Gusick explained that district felt that those involved in the investigation: the principal, the district solicitor, the superintendent, along with the school board president, were the proper people to face the public. The rest of the school board sat in the front row.

After the meeting, fired assistant coach Tom Batgos clarified a point with SAVVY. “There is no policy that coaches have to be in the locker room.” He said he’s always parked his car, walked to the field for practices, then returned to his car. “We did nothing different than the head coaches of the other 17 sports.” He also said Coach Vogan was busy dealing with minor kids’ issues before and after practice, implying there was little time for him to even think about patrolling the locker room.

SAVVY also caught up with a half-dozen junior football players, including Kade Lamarre, who expounded on his earlier gripe: “I have not gone through the [school] halls a single day without a broom or hazing joke.” (The alleged victim told authorities he was penetrated with a broom as part of ritual hazing.) We overheard Meisinger making plans to meet with Lamarre this week.

Still others complained about the torrent of online abuse they’ve received.

One thing’s for sure: The community is still smarting over this whole sordid and sorry mess – there’s anger, there’s sadness, there’s shame, there’s frustration.

Another thing that’s clear: T/E is working hard to heal the wounds – self-inflicted and otherwise.

“I hope we will remain Stoga Tall and won’t allow this to define us and that we will come out stronger on the other side,” affirmed Principal Meisinger,

And at the end of the day, what doesn’t kill you makes you stronger, right?