After huddling with disgruntled Devon neighbors, he’s just unveiled a new plan that lops off the top floor of his proposed Devon Yard apartments and cuts the number of units from 135 to 100.

Was it the blue yard signs that sprouted like spring weeds along adjoining streets after that very vocal public meeting? 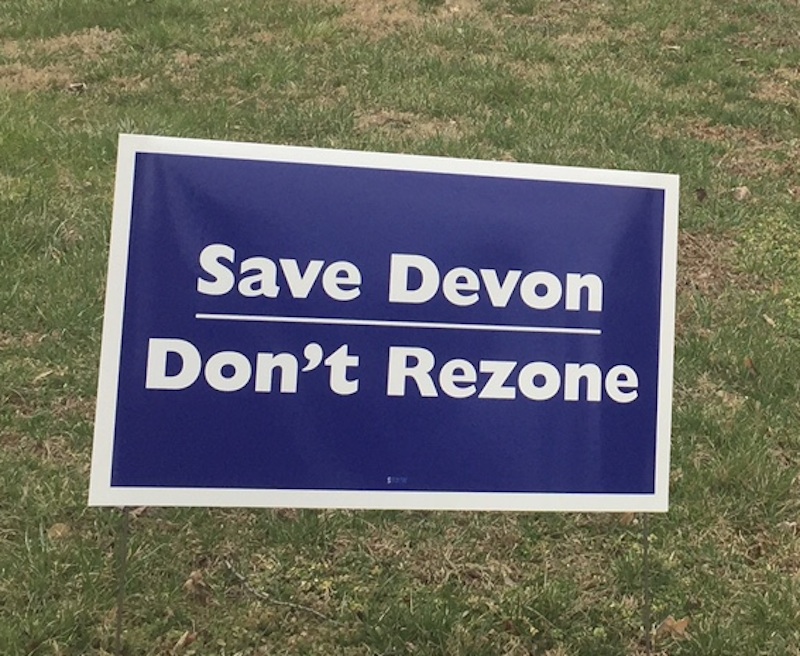 Or the realization that the hubbub wasn’t going to blow over and he’d have to give a little to get a lot.

Or perhaps he asked for the moon, knowing he might have to settle for the stars – a ploy not unheard of among developers.

Whatever the spur(s), Kahn heard y’all loud and clear: You like his Devon Yard Anthropologie/Terrain Garden Center/Vetri restaurant plan for the old Waterloo site. His proposed five-story retail/apartment building across the street? Not so much.

Under the new plan, the structure would stand four floors/50 ft. high – a height that’s allowed under current zoning laws.

Calling his concession “an effort to create some harmony with the opponent neighbors” and, yeah, a way to get his plan approved, Kahn tells SAVVY he’s “heard nothing but delight from the board. However, there are still neighbors that will never be happy.”

Each unit will be “a little bigger,” Kahn says, because “we’re marketing to empty nesters wanting larger units.” (A Kahn hint-hint to those fearing the project will overtax T/E schools.)

Although Kahn says there are no architectural renderings yet, he tells us that the building’s footprint, rooftop decks and pricing will remain the same. So picture the rendering below in four stories. (Take out either the second or third floor.) 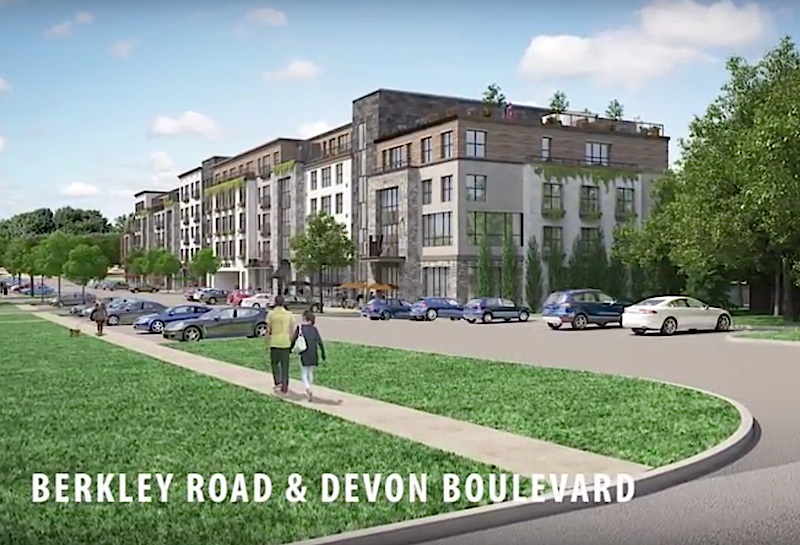 This time out Kahn insists he’s not budging.

“We have scaled this down to the bare minimum, “ he writes in an e-mail. “Nothing left in the tank to give. We will not jeopardize the quality of the project by making it any smaller.”

So what happens next? LOTS of talking. Why? The re-do enters the Easttown “system” as a new plan, one that still requires a zoning change.

It was officially submitted to Easttown Supervisors Monday night.

Who sent it to township planners.

Who will hold a public hearing, then make a recommendation and conditions and send it back to the Supes.

Who will then hold their own public meeting, likely the last week of April. (A 30-day public notice is required.)

Who will then, ta-dah, vote yay or nay.

Meantime, the chair of Easttown’s Board of Supervisors  tells SAVVY it’s “a no brainer; the density is better; the height is conforming.” But the setbacks “from the road and other structures” might still be an issue, Supe Chris Polites allows.

“I might not be completely enamored with his plan,” Polites says.  But he knows one thing for sure: he doesn’t want a Super WaWa or car dealership built there instead. Incidentally, Polites let slip that he’s heard (unconfirmed) rumblings that BMW is lusting for the site.

After all, Kahn could just up and sell the lot if his plan is nixed, the Supe says. Which just might put this one in the category of “Be Careful What You Wish For.”

Got something to say about No Gay Thursdays and whatever other nonsense/crimes may or may not have been committed in the Conestoga football locker room? Monday night’s your chance.

The Tredyffrin/Easttown School District has scheduled a public meeting on the whole, hot hazing mess for March 28 at 6 pm. in the Stoga auditorium.

To bring you up-to-date:

Coach Vogan last week resigned from all “coaching responsibilities” (including the baseball team). The rest of the football coaching staff was fired. The district has to hire a bunch of new coaches, like yesterday.

T/E’s internal investigation (separate from the DA’s) concluded that:

More than a few folks – including some students, players and football parents – aren’t buying the alleged victim’s story, raising the specter of another Duke lacrosse imbroglio. There’s A LOT more to the story than the DA’s saying, they claim.

To instill a more “positive and respectful sports culture,” the district wants to:

Talk about your well-timed exits. Retired, longtime School Superintendent Dan Waters headed for the hills in July, thereby avoiding T/E’s twin scandals of 2015-16: sexting and hazing. On the flip side, tough timing for new Supe Richard Gusick. We wouldn’t blame him a bit if he pined – at least occasionally – for the relative peace and quiet of his old admin job at T/E.

Stay tuned, folks. As we say in the news biz, this one’s got legs.

Pop quiz: When is a deli not a deli? When it’s a trattoria, silly.

Appetite’s Delight in Gateway is pulling off the switcheroo of the century: Sandwich shop by day; Italian BYOB by night, white tablecloths and mood lighting included. 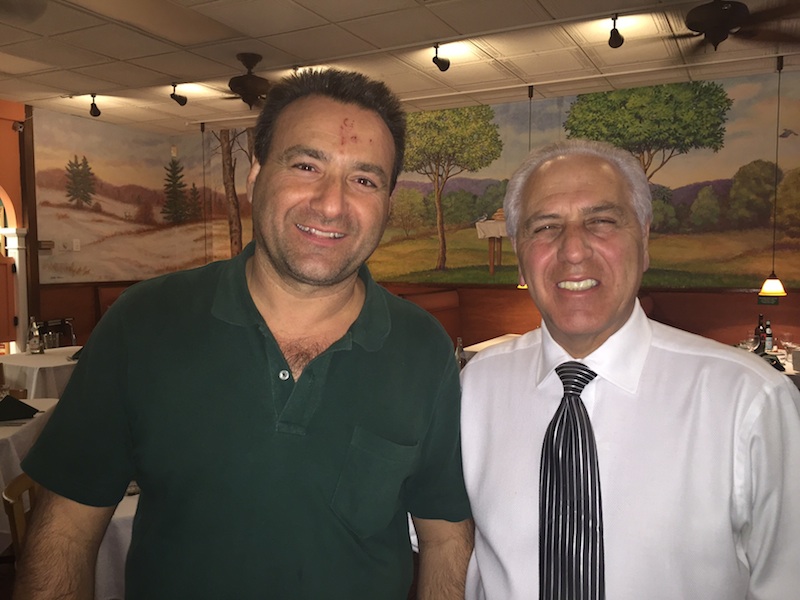 Pren says Rocco had “a vision that Gateway needed a nice Italian BYOB … He kept pushing the idea and “he wore me out,” Pren says.

Cue the mid-winter opening of Appetite’s Delight Trattoria, amid minimal fanfare. Only a sidewalk sign announces the split-decision supper spot. (You can still scoot to the rear for sandwiches at night.)

The vibe: A work in progress. Arched Italianate columns now separate the dining area from the sandwich shop. Coming soon: Draperies to soften views of the brightly lit counter in back. 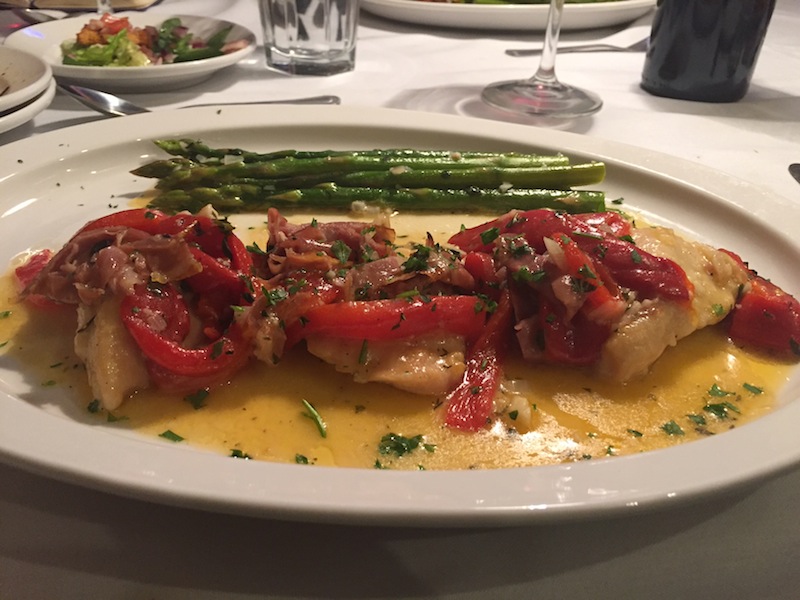 Pollo Marcello includes a side of spaghetti or veggies for $19.

A plus: The Gateway state store, handy for last-minute bottle runs.

Another plus: Old school in a nice way, Rocco himself will show you to your table. A Berwynite by way of Abruzzi, Italy, dapper Rocco could star in a Rat Pack movie.

Coming soon: Gluten-free pastas and expanded alfresco dining. The spring repaving of the shopping center will extend Appetite’s “front patio” by 4 to 6 feet.

Thanks to Nancy Amoroso, Wynnewood stylist to the stars (and regular humans too), SAVVY’s got the straight scoop on spring style for you and your honey.

Not sure what to buy, if anything, from the season’s confounding, colorful array? Here are Nancy’s buying suggestions for a spiffed up and stylin’ April/May/June closet:

For the record: Nancy calls many of Spring ’16’s looks “a tough sell.” After all, they’re ripped from the 70s. And let’s be honest: who really thought they looked all that swell back then? (Contact Nancy at [email protected])