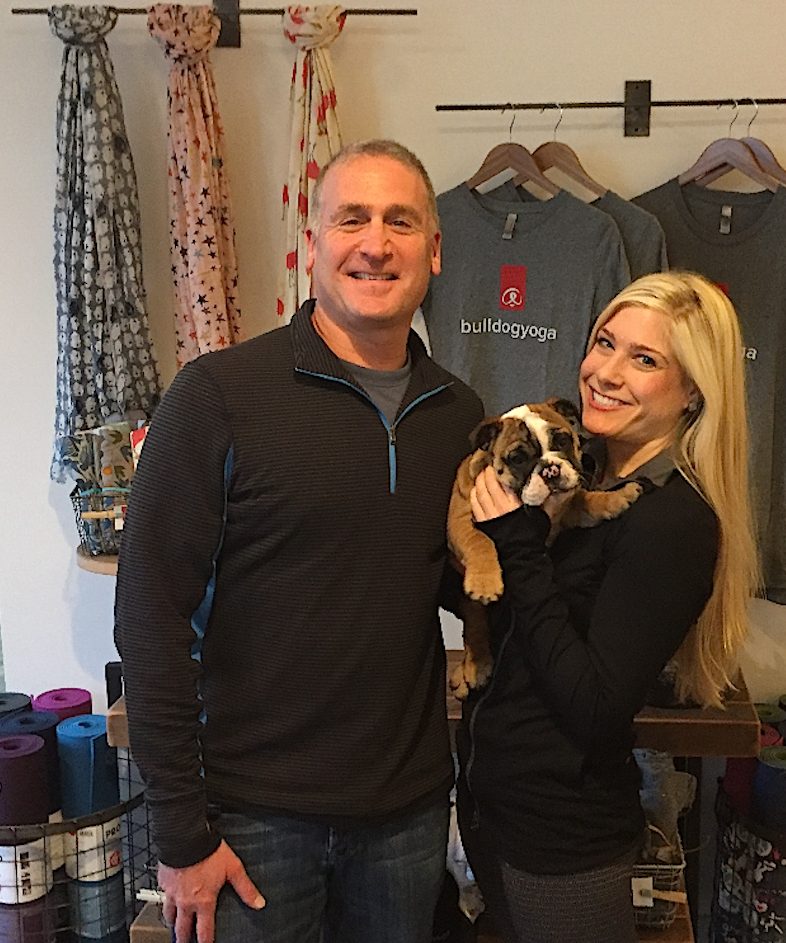 Take every notion you’ve ever had about yoga, then flip it – like your best downward-facing dog.

What do you get? Bulldog yoga.

Debuting its flagship this Friday, Feb. 19 in stunning space in the new Villanova Center, bulldog aims for Top Dog status. If it hits the bull’s eye, it will become nothing short of the SoulCycle/FlyWheel of yoga.

A breed apart AND a breed above.

Indeed, bulldog (small “b” intentional) is a whole ‘nother animal, with its own sound, look and feel.

With three skyscraping studios, lobby, lounge and locker area, every inch of bulldog’s 3,350 square feet is cutting-edge cool, courtesy of Powerstrip Studio – the fancy dancy LA firm behind Philly’s Palomar Hotel, the W Hotel Westwood and a host of other schnifty projects.

So, sorry, no Buddhas or framed Namaste posters here.

Instead, you’ll be greeted by adorable Gracie Jane, a 10-week old bulldog pup and the brand’s official mascot. 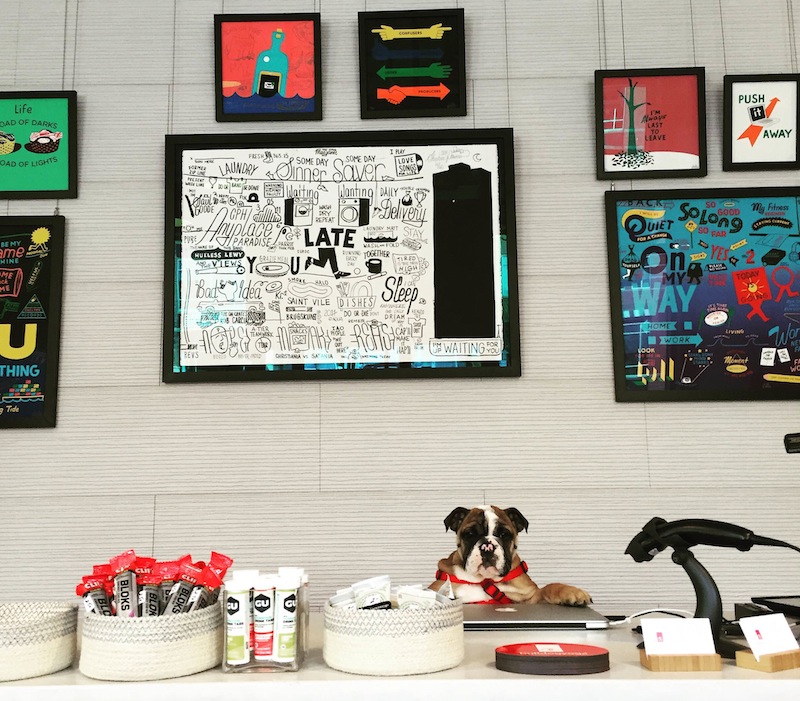 All of which begs the question: WHO let this dog out? Successful Villanova entrepreneur Jon Cummins, co-founder of real estate redevelopment firm Amerimar Enterprises.

“Jon travels on business a lot and likes to practice yoga but thought he could make it better,” bulldog GM Katy Conicella tells SAVVY. “Jon thought: ‘Why not do yoga to some really cool tunes? Why not make it more accessible to people who are intimidated by yoga?’”

Like the good Wharton grad that he is, Jon did his homework, including focus groups, and hired local gal Katy, an Academy of Notre Dame/Georgetown alum, to bring his vision to life. Katy conceptualized the classes, trained 22 (and counting) yoga-certified leaders in the bulldog method, and acquired mascot Gracie Jane. (She brings the lively pup home to rest in Bryn Mawr each night.) 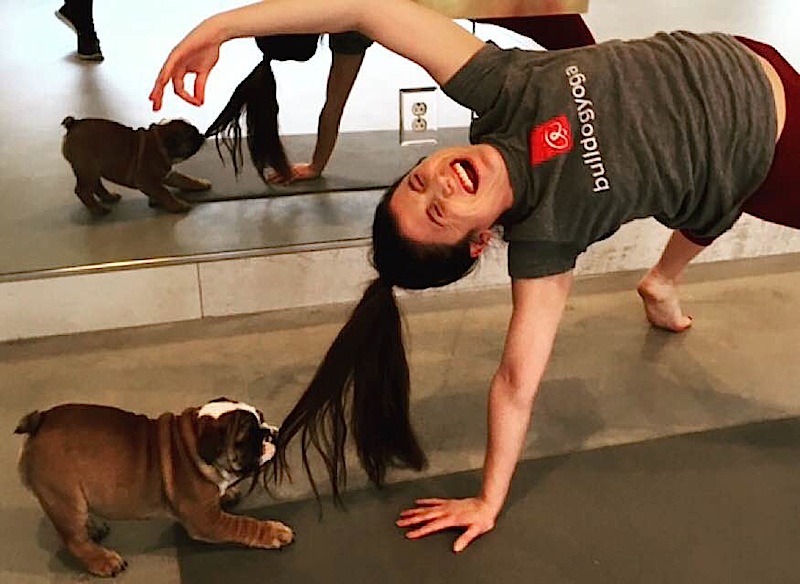 “Jon spared no expense,” Katy says. “We even pay our talent more than the typical yoga studio.” The bulldog team is already sniffing out similarly affluent/close-to-campus spots across the country, she says.

And why “bulldog”? “It’s a fun name and reflects the spirit of the place,” Jon tells SAVVY. “It doesn’t sound traditional.”

Katy confesses to “loving the inner stuff” of traditional yoga but insists you can practice in your own way at bulldog. (“Your kind of movement” is the bulldog tagline.)

“Badass yogis” might balk, she admits, but there are lots of folks  – nearby ’Nova students included – who will appreciate Yoga 2.0. “We’re not trying to judge here,” Katy says. “This is just our take on it … We don’t want yoga to be a solemn experience; we want it to be fun.”

A second first this week for Villanova U, whose men’s b-ball team is still ranked #1 in the country.

But this first is no fun.

An LSD ring appears to have been broken up on campus. The school’s public safety director says it’s the first LSD case he’s seen in his eight years on the job.

Radnor police arrested freshman Justin Yim after they found $9,000, drug paraphernalia, and what looked like LSD and pot in his south campus dorm room. He also had three cell phones, the contents of which may lead to more arrests.

It seems Yim was inadvertently busted by his own roommate. Daniel Jin, 19, allegedly assaulted a female on campus and claimed LSD made him do it. Cops and school officials then did the math…

Antipasti alert! Zavino is expanding to the Main Line. The wine/small plates/pizza joint with outposts in Center City and West Philly is leasing space in Bryn Mawr Village. If it’s like the Zavino in Midtown Village, the vibe will be industrial chic (read: super cas) with affordable prices. Zavino antipasto is DEE-lish. Seriously, it is.

Besito: For Whom the Bells Didn’t Toll. Inquirer food critic Craig LaBan gave Suburban Square’s Besito a “no bell” rating last Sunday. A deafening thumbs down. We here at sunny SAVVY prefer to view it as a wake-up call to the “authentic Mexican” kitchen that started out humming and has since gone ho-hum – at least according to LaBan. Not that this is a Yang Ming-sized problem. But still…

Cue the Aqua String Band. Bernie Robbins Jewelers sure whooped it up at its grand opening (or should we say “re-opening”) in Villanova. 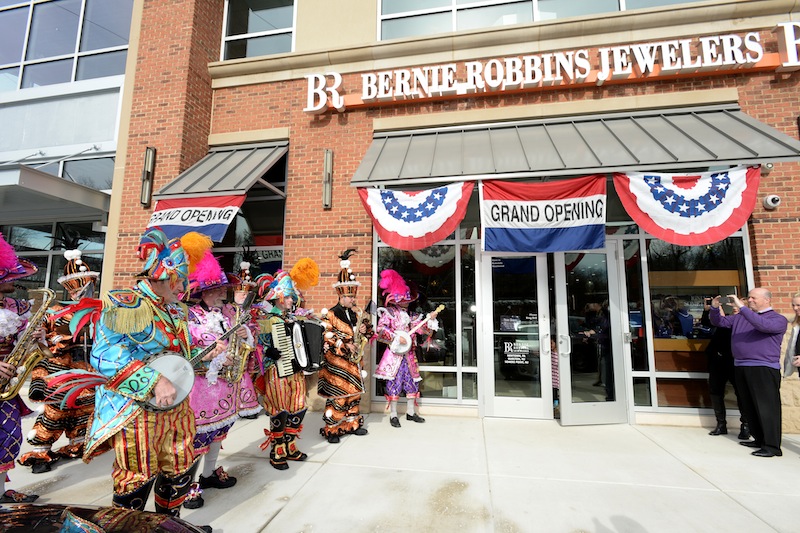 The family-owned baubles biz scooted from its longtime digs in the Radnor Hotel to the other side of the Blue Route in the new Villanova Center.

Why pick up and move just a jog away after 20+ years? Better visibility on Rt. 30 and ample parking. Oh, and did we mention BR’s new Rolex Corner and expanded Cartier and Hearts on Fire boutiques? You’re welcome.

Another spot for empty nesters to hang their hats? A few weeks ago, we told you that Nemours (Dupont’s children’s health system) is putting a medical office building at the old Paoli diner/Pizzeria Uno on Lancaster Ave. (That sigh you hear is the sound of our restaurant hopes deflating.) This week, developer Ed Morris (E3 Ventures) tells SAVVY he has the adjacent parcel under agreement and plans to build townhomes there.

A zoning change is needed but this won’t be Morris’ first rodeo with township planners. He prevailed, most recently, on Cricket Ave. in Ardmore. This one should be MUCH smoother sailing.

A SAVVY shoutout: To Gladwyne’s Buzz Miller, 74, for making a cool PACT with Animals. PACT is the nation’s only nonprofit (free!) service that finds a temporary home for your pet – if you have to serve in the military or have an extended health crisis. Brilliant idea, really.

A retired attorney, Buzz has gone pro bono all the way. Eastern Main Liners may recall Buzz and wife Judi owning Buzzy’s BowWowMeow in Narberth before it became a Doggy Style.

A SAVVY salute: You may not know Scott Morrison’s name but you’ve probably dined at one his restaurants. The amiable entrepreneur and father of Episcopal Academy students Julia and Helena Morrison died from an apparent heart attack at age 54 at his Newtown Square home last weekend. Tragically, Scott’s wife died of breast cancer in 2012.

Among the local spots Scott has had a hand in: Nectar in Berwyn, Tango in Bryn Mawr, Basil in Paoli, Maia in Villanova and Avero in Devon. It will be interesting to see what happens to his two Wilmington restaurants, Chelsea Tavern and Ernest & Scott Taproom.

A second salute: The Main Line is mourning noted philanthropist, financial adviser and class act extraordinaire Ray Welsh, 84. The loyal Penn grad and Haverford/Avalon resident passed away unexpectedly Monday night after a bacterial infection. Just last year, UBS Financial Services (where he was a partner) threw him a 60th anniversary party. “He waved off questions of retiring with a grin,” according to his Inquirer obit.

A fabulous fundraiser for the Red Cross, the orchestra and his alma mater, Mr. Welsh was also a devoted family man: to his wife of 62 years, to his daughter and son (a second son predeceased him), and to his six grandchildren. Just a few days before he died, he wrote his daughter to tell her how “blessed” he felt. Gotta love that.

A memorial fund benefiting Penn Medicine has been created in his honor.