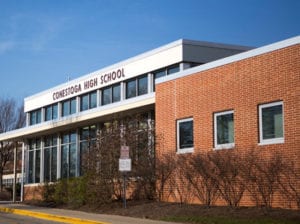 The football hazing/sodomy scandal that rocked Conestoga last year won’t be going to trial after all.

The three accused ex-players today admitted in court only to harassing their freshman teammate.

In exchange for that admission, the really nasty charges – assault, making terrorist threats, conspiracy, unlawful restraint, possession of an instrument of crime – were all dropped. (Their trial on those charges was to have begun this morning.)

And remember the DA’s vile account of what went down in the locker room in October 2015?

Well, that’s been dropped, too. Or at least radically revised.