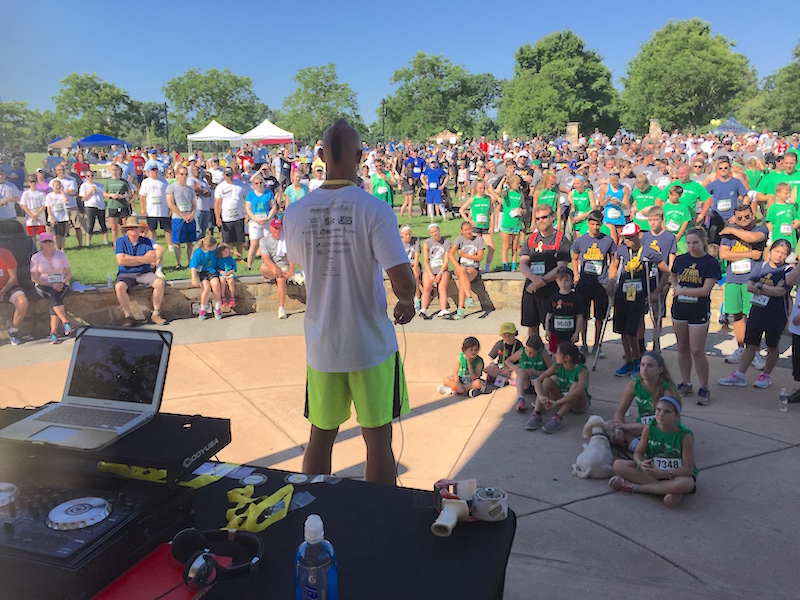 The teams: Many in matching tees and led by people battling sarcoma on crutches, wheelchairs and with prosthetic limbs, about 30 teams turned out for the 5K chip-timed race and one-mile walk.

The hometown hero emcee: Conestoga ’06 star and Ewing’s Sarcoma survivor Mark Herzlich, 29, who will play his 7th season for the New York Giants this fall (with a steel rod in his thigh).

Gang Green: About 80 folks wore green t-shirts to honor the late Pat Maher of Devon, who tragically lost a four-year-battle with sarcoma last June at age 47. Ever valiant, Pat himself led his green-shirted team of St. Monica’s and Nova pals at the 2015 Steps to Cure Sarcoma.

The emotional takeaway: The deep wells of solidarity and support for families affected by this relatively rare bone and soft-tissue cancer. 200 people joined the first Steps walk in 2015. Last year, 700 showed up; this year, 1300. Wow.

The financial takeaway:  A whopping $125,000 and counting – far exceeding the event’s $75K goal – for sarcoma programs at the Abramson Cancer Center at Penn Medicine, Penn Veterinary Hospital and CHOP.

About 50 friends, family and Bala Cynwyd neighbors walked and ran for Kim Hayman (wearing hat and yellow lanyard). Kim was diagnosed with sarcoma in October of 2016 and tells us she’s cancer free. Her team name: Kim Crushes Cancer.

Leading the “Fight to Win” team formed in memory of the late Pat Maher of Devon: his in-laws Mike and Diane Sweeney of Malvern, Pat's wife, Jennifer Maher, his mother, Helen Maher, and three children, Caeli, Riley and PJ.

Event co-organizer Barb Herzlich of Wayne with her son, Mark, the former Conestoga and Boston College star who famously beat Ewing’s sarcoma and now plays for the New York Giants.

Mark Herzlich’s grandmother, Ann DiLeone, Stacey Pellegini of Wayne (whose husband, Lou, is a four-time sarcoma survivor) and Connie Migeot of Wayne sell copies of Mark Herzlich’s autobiography, “What It Takes.” Proceeds were donated to the cause.

Conestoga football players and parents came out to support the former Stoga star's cause, including Ryan Drennen and Chris Wiggins of Wayne, and Christopher, Katherine and Edward McGovern of Malvern.

Among the St. Monica’s families that came out to support the Maher family: Wendy Brooks of Devon, Angela Lawton of Wayne, Kevin, Mary Elise, Erin, Diane and Steve Pealer of Devon, and Zach and Gary Brooks.

Spinning tracks for the crowd: DJ Jenny McG, aka Jen McGowan of Wayne.

Sarcoma survivors and warriors pose for a group shot before the 5K race and one-mile walk. (Photo by Sandi Yanisko.)

Spirits were soaring as 250 supporters celebrated yet another notch in the Conservancy’s preservation belt: a new 43-acre easement that includes Villanova’s historic Red Rose Farm.

The party: Guests gathered at the Villanova estate, Meadowbrook, for light fare by Brulée Catering, live music by the Ken Ulansey Ensemble, and a silent auction.

The enlightened landowner and gala host: David Hoffman, owner of 18th-century Red Rose Farm and Meadowwood, who worked with the Conservancy to “save” his property in perpetuity.

The fine print: The easement means the land can’t be carved up and developed – even if the property changes hands. LM Conservancy also counts among its wins: easements protecting two historic facades and some 183 acres in Gladwyne, Wynnewood, Penn Valley and Bryn Mawr.

The bounty: $90,000 for the Conservancy’s work to preserve clean water, open space and historic buildings in Lower Merion.

Kathy Spagnola of Bryn Mawr, Adam Barker of Phoenixville, Alison Pottage of Ireland, and Richard and Pia Halloran of Haverford.

Jamie Sheller and Mark Greisiger of Bryn Mawr, Rachel and Harry Miller of Villanova and Board member Heather Osborne of Ardmore.

Lower Merion Conservancy Board member Bruce Reed of Bala Cynwyd and Executive Director Maurine McGeehan of Narberth celebrate with David Hoffman of Villanova, who allowed an easement of 43 acres on his property.

Linda Tasker of Merion, Gala Committee and Board member Laurie Beach of Bryn Mawr, and Ginette and Herbert Wendelken of Haverford, also on the Gala Committee.

John Newhall of Penn Valley, Joyce Sando of Haverford and Fred Bissinger of Villanova, a sponsor of the gala.

Pam Porter of Rosemont, Board member Melissa Morris of Villanova, and Gala Committee member Laurie Lundquist make their way through the buffet line.

Brien and Maggie Murphy of Haverford, Lia Calhoun of Bryn Mawr, and Sara Hatch of Lenox, Mass., enjoy a tapas dinner in the tent.

Conservancy Director of Programming and Communications Amy Chapkovich of Havertown, with Samantha, Tania and Charlotte Alexander of Bryn Mawr. Tania is a Board member.

Melissa and Dev Kantesaria of Malvern bid on Phillies tickets in the silent auction.

Kim Shepard of Flourtown, president of the Whitemarsh Foundation, and Jody Holton of Narberth.

A see-and-be-seen affair at the horse show: Chapeaux for Devereux

The setting: Held on Clydesdales Friday, the June 2 party venue overlooked both show rings, making for some happy horse-watching.

The look: “Race Day attire” was requested for a best-dressed contest. Gents who forgot bow ties could score cool ones at Stoga-grad Samantha Leibowitz’s pop-up shop.

Lindsay and Jeff Gehret of Malvern.

Fred, Helaine, Danielle and Dan Liebowitz of Malvern represented fashion designer Samantha Liebowitz, a Conestoga graduate whose clothes and accessories were sold at the party.

Matt and Meredith Rovine of Devon and Katie and David Egan of Wayne.

Devereux Advisory Board member MaryAnne Hawrylak of Devon and her husband, Elbert Johnston.

Nature lovers meandered through the Gladwyne grounds of the environmental education center on June 4, sipping and supping at “Farm to Table: A Toast to Twilight.”

Along the way: In a new wood pavilion, 160 guests nibbled on charcuterie and slurped back-to-nature drinks from 13th Street Cocktails, the mobile bar company that’s suddenly everywhere. In the meadow, Alice Herrick of the Funicular Circus amazed with a high-wire show.

By the stone circle: Upper Merion middle school students talked about how they grew herbs on top of aquariums using waste and water from goldfish, part of Riverbend’s award-winning aquaponics program. (Look, Ma – no soil!)

On the hilltop: At community tables festooned with fresh flowers, guests feasted from food stations then raised their glasses for the twilight toast led by board chair Doris del Tosto Brogan and executive director Laurie Bachman.

The bounty: Some $43,000 was raised for camps, scouting, aquaponics and community outreach programs at Riverbend.

Riverbend Board member Bryan Franey of Bala Cynwyd and his wife, Janine, and Shannon and Jonathan Moyer of Bryn Mawr enjoy  all-natural cocktails like Ginger Mules and Riverbend Collins.

Riverbend Executive Director Laurie Bachman welcomes Gordon Cooney of Newtown Square and his wife, Gretchen, a Board member and Board Chair Doris Brogan of St. Davids at a pavilion built last year to be named in honor of Nic and Dee Adams.

The Funicular Circus entertained the crowd with a high-wire show and ground-level walking games.

Nan Lansinger of Rosemont, with her daughter Diana, and Meghan Bachman, both of Philadelphia.

Nick and Erin Durant and Karen Meehan, all of Bryn Mawr, with Riverbend Outreach Coordinator Tara McDonnell of Gladwyne and Ann Mariani of Villanova.

At the top of the hill, Marc and Rachel Baum of Upper Dublin, Mike and Amy Shubert of Wynnewood and Melissa and Glen Barenbaum enjoy the alfresco tapas dinner.

Herman DeJong of Gladwyne balances a glass of wine and a full plate.

Development Director Lisa Hancock shares a closing “Toast to Twilight” with event chair Jimmy Owens of Havertown, a Board member.

On a lovely June evening, friends of Fred’s Footsteps enjoyed an intimate, indulgent Girls Night Out at Willowbrook Farm.

The ladies: Each forked over $150 to attend the June 1 GNO, which was donated by Life’s Patina with help from cocktail and beauty sponsors. Only 75 tickets were auctioned off at the Party in the Yard, the Ardmore-based non-profit’s big charity gala.

The cause: Fred’s Footsteps carries on the legacy of community leader Fred DiBona of Bryn Mawr, who lost his fight with cancer in 2005 at age 53. Founded by his family, FF pays non-medical expenses for families thrown into crisis by a child’s serious illness, injury or disability. In 12 years, FF has doled out $4.5 million to 650 area families. Known for his big heart and loyalty, Fred – modest to the end –  was president and CEO of Independence Blue Cross.

Sarah Collier and Lynn Heth of Gladwyne, and Lydia Hamburg of Penn Valley.

Advisory Board member Angela Allevi of Gladwyne and Suga Smith of Radnor.

Guests belly up to the horse-trailer bar wheeled in by 13th Street Cocktail Catering.

Friends of Judith Creed Homes for Adult Independence, better known as JCHAI, partied at the National Constitution Center May 10.

The awards: The Louis J. Carter Award – given to someone without a JCHAI family connection who goes above and beyond to support the cause – went to the founder of the Brownstein Group, Berny Brownstein of Bala Cynwyd. Jordyn Dannenbaum received the Lisa Bratt Award for raising spirits with her sparkling personality.

The program: The debut of a Brownstein-produced video about JCHAI and its new building campaign. Blank Rome attorney Laurence Shtasel headlined the live auction.

The cause: JCHAI helps adults with autism and intellectual disabilities live and work in the community, giving peace of mind to their families. The Bryn Mawr-based non-profit provides apartment and group-home options, teaches life and vocational skills, and reinforces Jewish life and values.

Cindy Dannenbaum with her daughter, Jordyn, a JCHAI resident and Lisa Bratt Award winner, and Jennifer Kaufman, JCHAI resident, with her sister, Sharon Freedman of Villanova.

Bienvenue to The Cottage in Wayne’s Eagle Village

Fans and friends toasted the newest addition to the Valley Forge Flowers family, The Cottage, purveyor of “enlightened” French antiques and collectibles.

La fête: About 100 friends sipped wine and nibbled charcuterie and baguettes while perusing The Cottage on May 31.

Le magasin: Lets in the light. You won’t find an inch of dark wood or grandma’s dainty doodads in this au courant shop adjoining The Barn at Valley Forge Flowers. Owner Barbara King regularly flies a small team of local ladies to the south of France to forage for vintage accessory and furniture. (Sorry, she’s not hiring.)

La charité: Main Line Animal Rescue was given a portion of evening’s sales.

Alan and Gale Cooper of Devon.