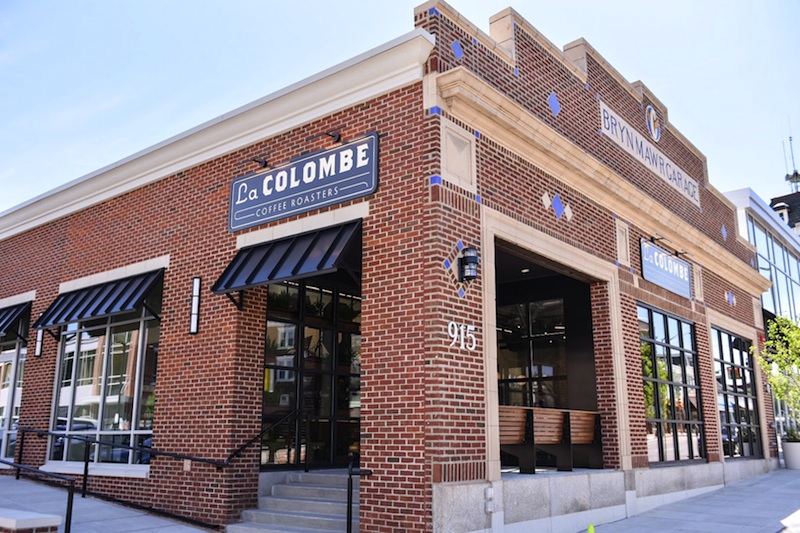 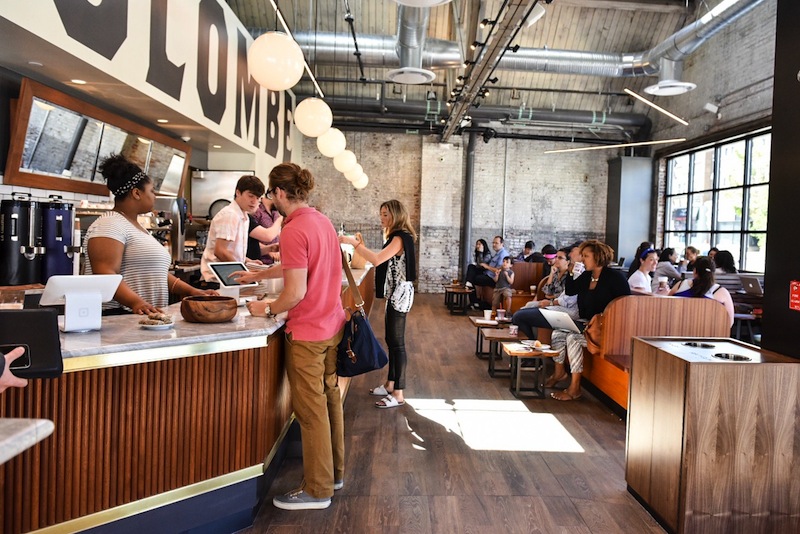 Sorry, Starbucks. We’re partial to coffee shops with character.
And local roots.
Co-owner Todd Carmichael hangs his hat in Gladwyne and his company roasts, brews, distills and bakes right here in Philly.
Plus, he and partner JP Iberti are serial philanthropists, making La Colombe a brew you feel good about swallowing. 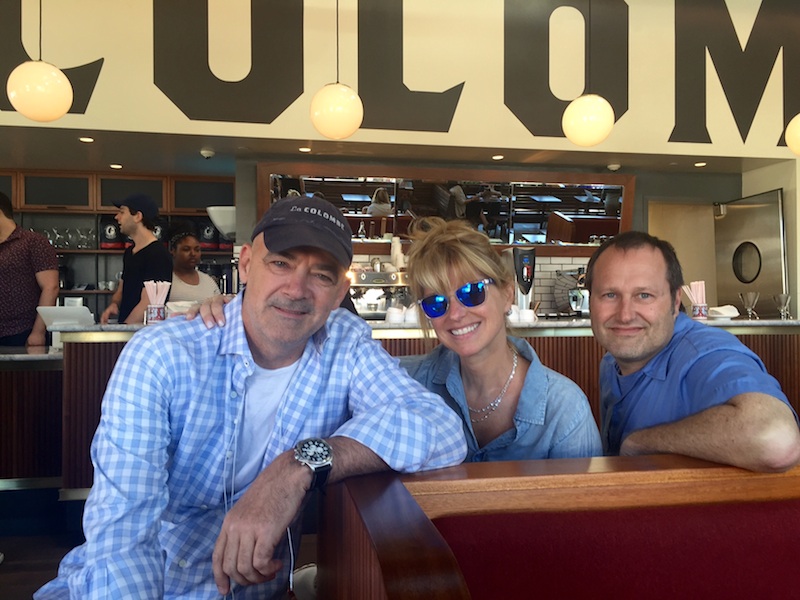 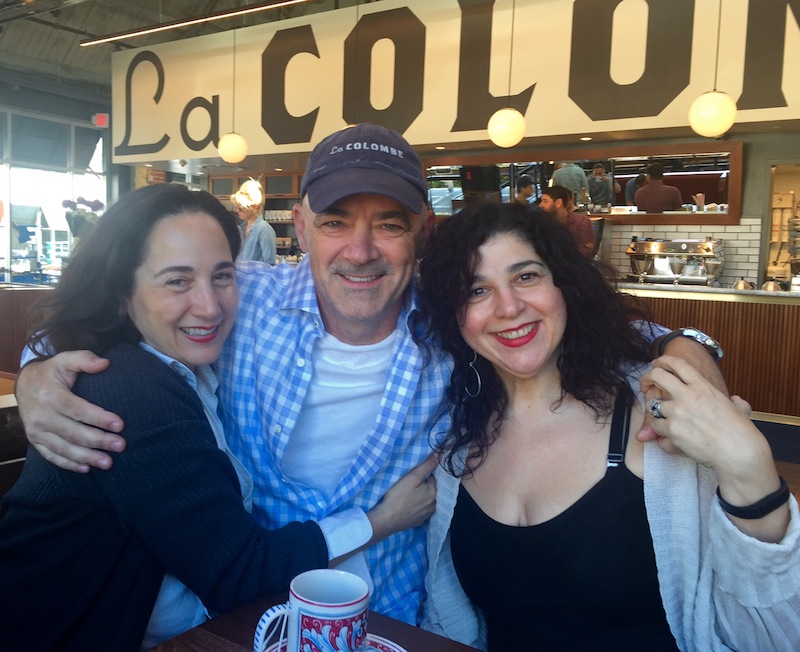 On opening morning, the coffee mogul/wilderness trekker/Travel Channel star was clearly stoked for his new venture: chatting up new pals and connecting with old ones, among them longtime loyalists Mariann Boston Reh and her twin sister, Nickie Boston.

Being a suburban La Colombe fan has long been, well, a grind. You either brewed the beans at home or scooted to a downtown café.

It’s taken Todd 22 years (and 16 cafés in other towns like DC, Boston, NYC and Chicago) to show the Main Line a little love.

But we’re cool with that.

Because good stuff is always worth waiting for.

Todd assures SAVVY he’s dreamed of a local spot for at least a decade.
It’s just that the bull’s eye was hard to hit: a building with authentic architecture, cool neighbors (no ho-hum chains) and easy parking.

On the menu: Traditional and inventive coffee drinks, including cold draft lattes on tap. Breakfast/brunch/lunch vittles to grab ’n go or eat in: housemade pastries, small plates, salads and sandwiches on those to-die-for La Colombe baguettes, challah and other yeasty treats. Everything is prepared at the Fishtown flagship and trucked out daily.

A Bryn Mawr exclusive: Early release of La Colombe’s new draft latte in cans ($10 for a four-pack). By fall you’ll see these first-ever frothed milk/cold-pressed espresso pours in Wegmans, Whole Foods and Target.
Until then, they’re all ours.

And La Colombe’s just the warm-up act for Bryn Mawr Village.
The long-time-coming retail/office project is shaping up to be Someplace Special.

Developer Paul Aschkenasy tells SAVVY he’s filled his mixed-use center with “interesting” merchants that “people can get excited about.”

So strike up the band: there isn’t a mall or big box chain in the bunch. (OK, except for the newly opened Athleta, owned by Gap.)

The big guns – and the higher rents they command – were passed over in favor of smaller “character” tenants, the developer tells us.

The project might just revitalize all of Bryn Mawr, Paul says, its benefits spreading to struggling downtown merchants long squeezed by tight parking. 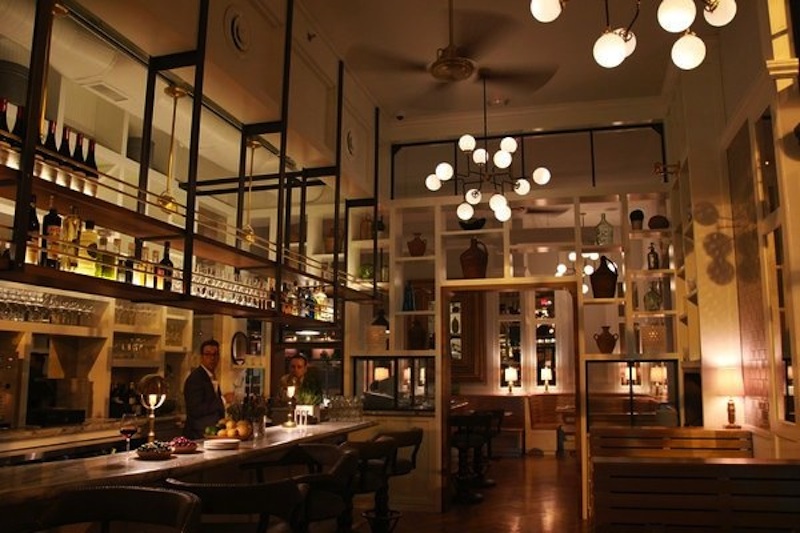 The Main Line Tredici will be a supersized version of the Center City original (above).Tredici Bryn Mawr looks drop-dead cool.

Forgive us, dear Dads. We know it’s your week in the sun, but this heartwarming mother-son story just won’t hold. 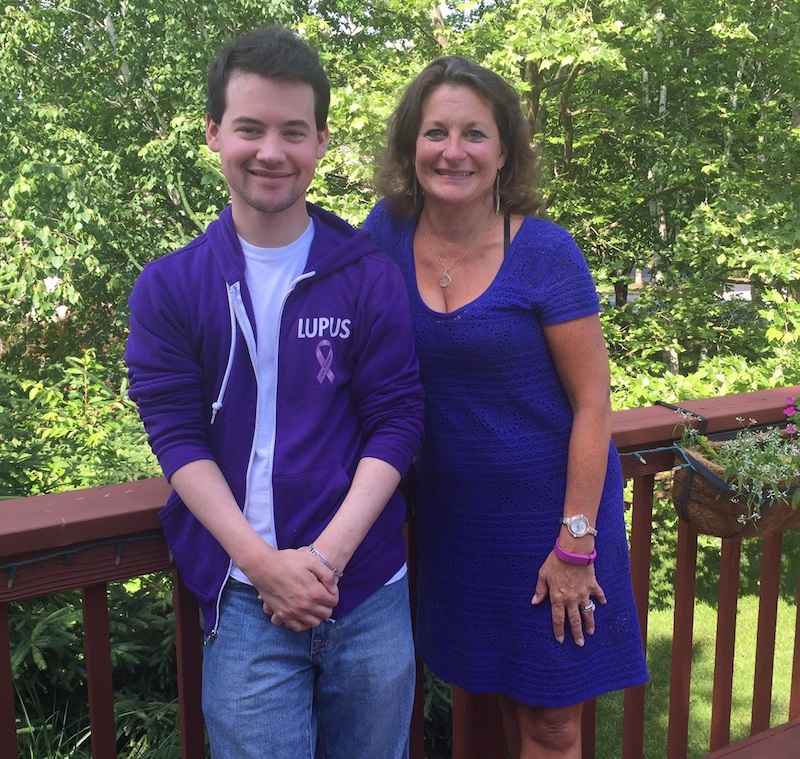 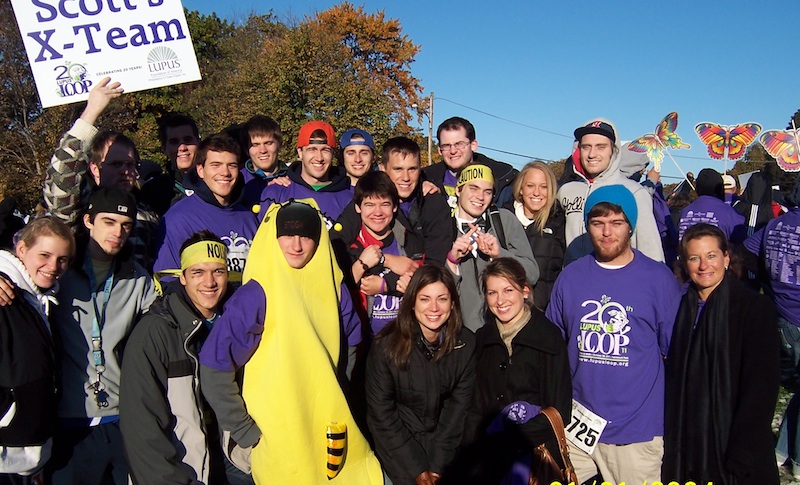 Scott, his family and friends have raised thousands for the Lupus Foundation at the annual Philadelphia Lupus Loop.

They almost lost him a handful of times. “It was a life or death struggle for years,” says Scott’s mom Betty Ann. While his pals were off getting their degrees and working first jobs, Scott was stuck at home, isolated and alone, shunning sunlight and germ-filled crowds, giving himself home dialysis five days a week.

A few years ago, his kidneys shot, Scott desperately needed a transplant. The donor had to be young (within 11 years of his age) and healthy. The likely suspects – his sister, brother, cousins and friends – were all tested. Not one match. His name went on a deceased donor list. He received four calls about kidneys harvested from young suicide and drug OD victims, four times hopes were raised then dashed for fear of needle-born infections.

That’s when Betty Ann Exler approached her son’s doctors with a most unconventional idea: Why not me?

No matter that she was 55, more than two decades older than the optimal donor age.

No matter that she would have to survive a risky, six-hour operation, live with a six-inch scar and endure a two-month recovery for a procedure that may or may not even work.

The odds were long but Betty Ann had a mother’s intuition. She believed.

Sure enough, tests showed that her kidney was a perfect match. And, thanks to an active lifestyle and a smart diet, she was as fit as a 30-year-old.

And so, shortly after her joyous wedding and honeymoon last fall, Betty Ann did what mothers do – she gave her son life.

For the second time.

Scott still battles lupus, armed with medications and a winning attitude. Germs that would be minor nuisances for us can still put him in the hospital. He still shuns sunlight, avoids crowds and watches what he eats.

When it became clear he would never need it again, Scott wanted to smash his home dialysis machine in celebration. (Cooler heads prevailed; it was returned intact.)

Asked how he feels about his mother’s sacrifice, the normally chatty young man fumbles for words. “Amazing” he says simply, grinning. He looks forward to getting back to college and, for the first time in a long time, a bright future.

And as for her lifesaving gift, Betty Ann sounds almost nonchalant: “I didn’t give it a second thought. I’ve seen my son work through so many challenges and keep such a positive attitude. He’s a really strong kid with a really good outlook. I just know he’s going to be OK.”

With a mom like you, Betty Ann, of course he is. 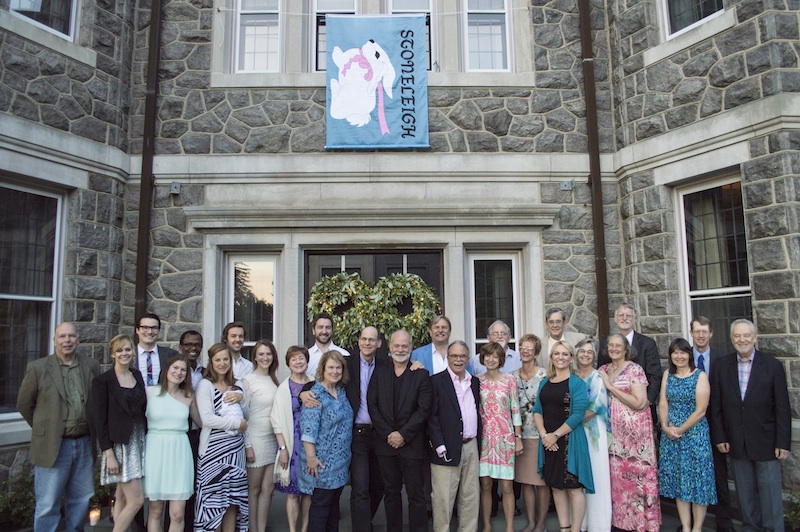 It’s a pic of the extended Haas/Cooper clan snapped outside Villanova’s Stoneleigh mansion. The gang had gathered for Friday night’s fundraiser for the Natural Lands Trust.

The Haases, you may recall, could easily have sold off their parents’ gorgeous 40-acre estate to the highest bidder.

Instead they said, “Nah. Let’s give Stoneleigh to the Natural Lands Trust so they can preserve it as a public garden. It’s only money, right?”

The Trust paid tribute to the Haas family at its annual Starfest gala, held this year at Stoneleigh.

In a nice touch, replica rabbit flags were given to each family member and one was even run up the flapole.

A SAVVY shoutout to another Main Line Tiger Mom – and we mean that as a compliment.

With a steel rod in his thigh, Mark Herzlich, once a standout Stoga linebacker, now plays for the NY Giants. 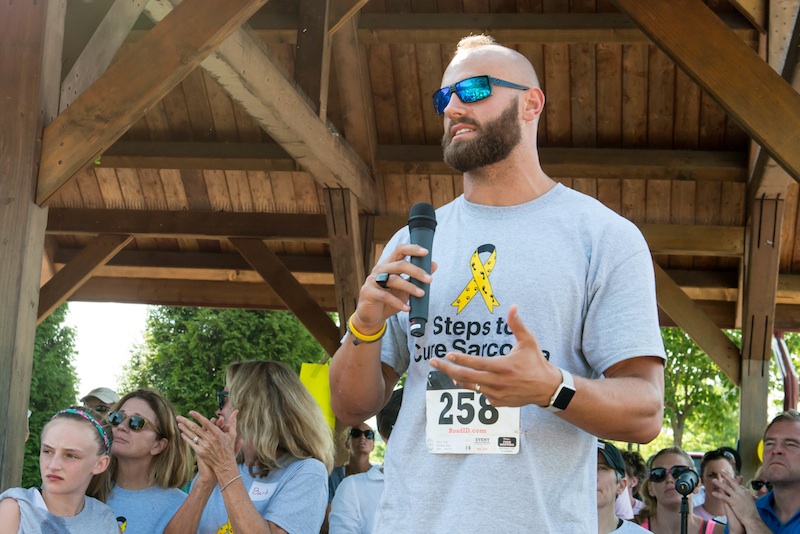 A second shoutout to the 2016 Conestoga Girls Lacrosse Team. With an 18-7 win over Radnor last Saturday, team captured its first state title in school history. Stoga’s had a rough year: we’re thrilled this team gave cause for jubilation. Way to go, girls!

And finally, Father’s Day gift ideas with local ties, courtesy of the fabulous SAVVY Street Team:
1. Sharpen his game with a custom golf club fitting at Club Champion Bala Cynwyd or tennis lessons at DVTA in Villanova or Bryn Mawr.
2. Get his butt in gear with class cards to Bulldog Yoga in Villanova, SoulCycle Ardmore, FlyWheel Bryn Mawr, Purenergy or Orangetheory in Paoli – or whatever studio, gym or trainer strikes your fancy.
3. Have him root on the home team with distinction in a cool graphic Eagles or Phillies tee by Paul Carpenter.
4. Snazz up the fire pit with a manly leather log carrier from Waltzing Matilda in Wayne.
5. Step up his grilling skills with a splurge on a Big Green Egg ceramic charcoal cooker/smoker from Kitchen Kapers in Wayne, Paoli or Ardmore.
6. Keep your beer geek hydrated with a growler and gift card from Ardmore’s Tired Hands Brewing Co.
7. Cater to your carnivore with house-made sausages, hot dogs, bacon or beef from sustainably-raised cattle at Chester County’s Wyebrook Farm (also sold at the Malvern Farmer’s Market). Or pick up dry, aged steaks at Farmer’s Butcher and Produce in the Rosemont Farmer’s Market.
8. Indulge his Fido fixation with a nifty pet portrait from Stacey Morgan’s 2DogStudios at Dogma in Wayne.