Hallelujah! It has been SAVED!

A few months ago, we told you about the fire ’n brimstone fight to spare Strafford’s old Covered Wagon Inn from CVS’ wrecking ball.

Well, Praise Be: preservationists’ prayers have been answered.

CVS’ developer has submitted a new plan to Tredyffrin Township that keeps the small circa 1780 building – once the Covered Wagon Inn, now Thomas Moser furniture – standing tall at the corner of Old Eagle School and Lancaster. 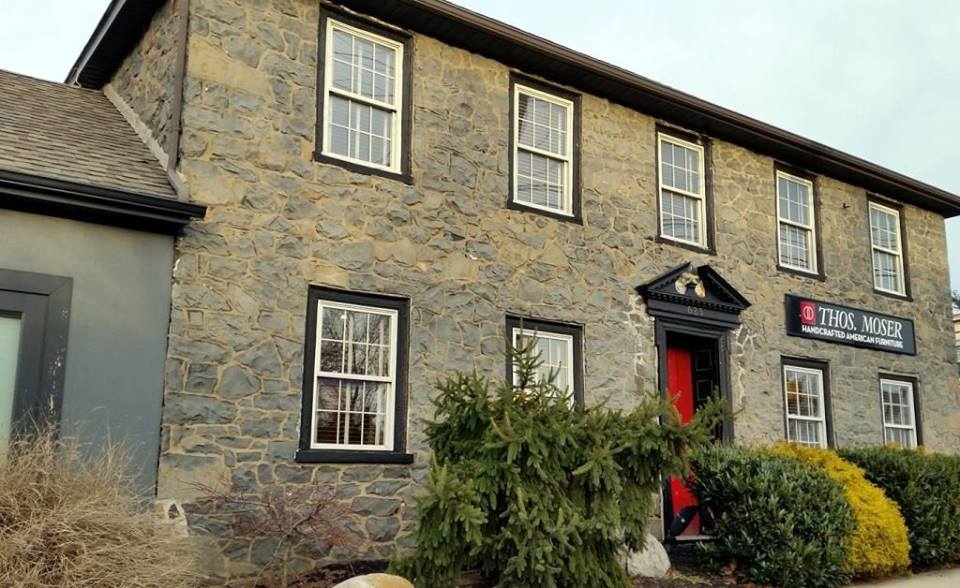 So kudos and hosannas to Tredyffrin Historic Preservation Trust President Pattye Benson, who – with an able assist from blogger/preservationist Carla Zambelli – let us all know that #ThisPlaceMatters. Glory Be’s, too, to township officials and every stakeholder who put this new deal on the table.

“The voice of the public was heard and played a significant role in this outcome,” Tredyffrin Supervisor Murph Wysocki tells SAVVY. “I’m happy that it’s been resolved in a manner that will preserve and protect the Covered Wagon Inn and will allow the project to go forward.” (Murph, you may recall, was the supe who had Pattye’s back after she first railed against the plan to township planners.)

Filed late Friday, the revised plan has owner Hoopes looking for an “adaptive re-use tenant” for the historic building.

“It’s small, but someone might find it very attractive,” says Lou Colagreco, attorney for CVS developer Summit Realty. Lou says CVS will even throw in a spruce-up of the old inn’s exterior while the CVS is being built. Pretty sporting, eh?

The revised plan is expected to be shown to township planners at their May meeting.

At which time, they will, no doubt, bestow their blessing. So, can we get an Amen?!

We yawned, too, until we saw the place.

And heard who’s in the kitchen.

And read the menu.

Because if you like Restaurant Alba in Malvern, you’ll flip for what Alba chef/owner Sean Weinberg’s cooking up near Bryn Mawr Hospital. 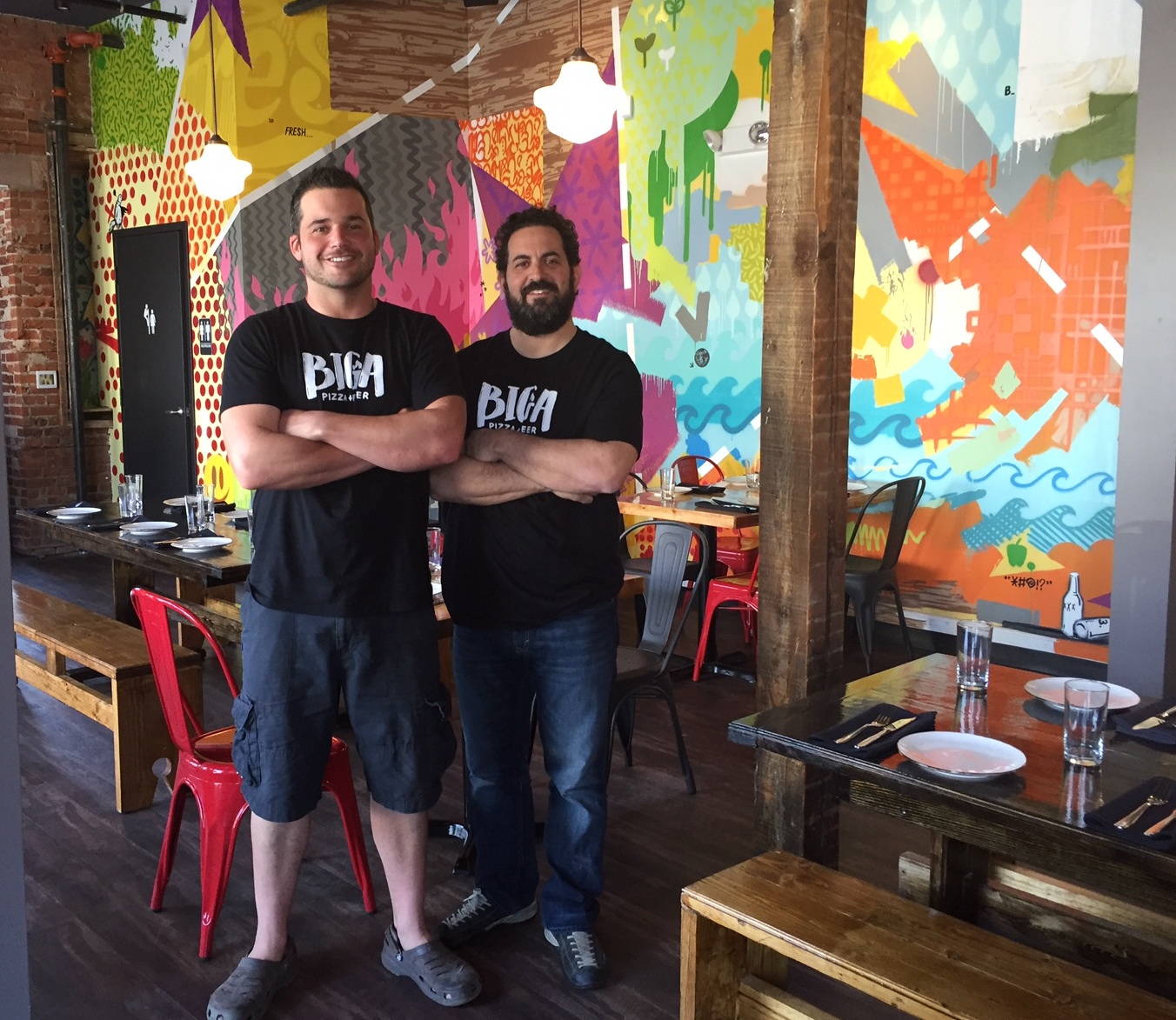 Wash it all down with six local drafts and 80 takeout beers, including those trendy sours. (Sorry, no wine.)

Sean’s two local partners bring LOTS to the table: Real estate whiz Tim Rubin (owner of the nearby Sporting Club of the Main Line) and numbers guy Chris Kline (Starr Restaurants). The trio knocked out walls between a pizza parlor, a tailor and a paint shop to create Biga, which aims for a big takeout biz along with table service.

Italian for the yeasty beginnings of pizza dough, Biga is big news that’s only going to get biga, once word gets out.

Brewing is so 10 years ago.

Distilling is what’s hip these days.

And no one has a cooler setting, and, we daresay, a tastier product than brand-new Brandywine Branch Distillers.

Neither had we, until our tour (with sips!) a few weeks ago.

Brandywine Branch bought and spiffed up a circa-1899 Chester County dairy barn on eight acres near the Stonewall and French Creek golf courses. (In a nod to the barn’s shaggy squatters of yore, locals have long known it as “the hippie barn.”) 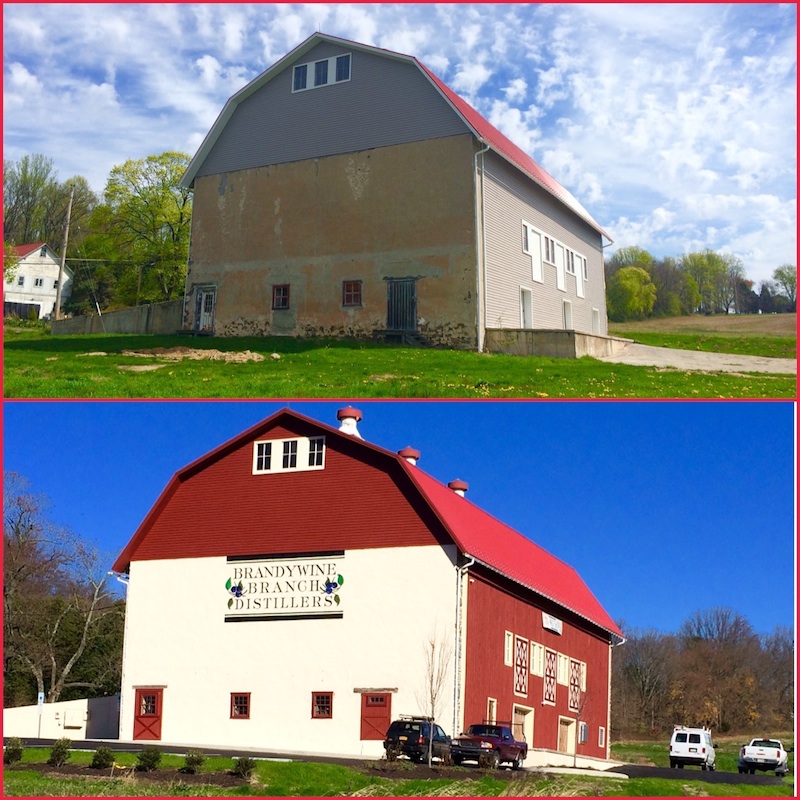 Before and after Brandywine Branch Distillers’ restoration of the circa 1899 dairy barn, aka “the hippie barn.”

The distillery is an offshoot of the fertile, enterprising mind of one Don Avellino of Malvern.

Spawn of the very same Avellino clan that once switched out your tires in Berwyn. The 75-year-old, 25-store Avellino chain was sold to Firestone (Tires Plus) in 1999.

Don tells SAVVY he’d been itching for a new, creative venture of late, “something more fun and exciting than auto parts.”

He studied up on top-shelf distilling, brought in his brother, Scott, and then – jackpot! – partnered with Riannon Walsh, aka the Whiskey Lass of Chester County, single-malt superstar, master “noser” and blender. Don would assemble the moving parts; Riannon would bring magic to the mash.

Fast-forward three years and Brandywine Branch – named for the river that starts and splits nearby – is rushing along toward opening day. 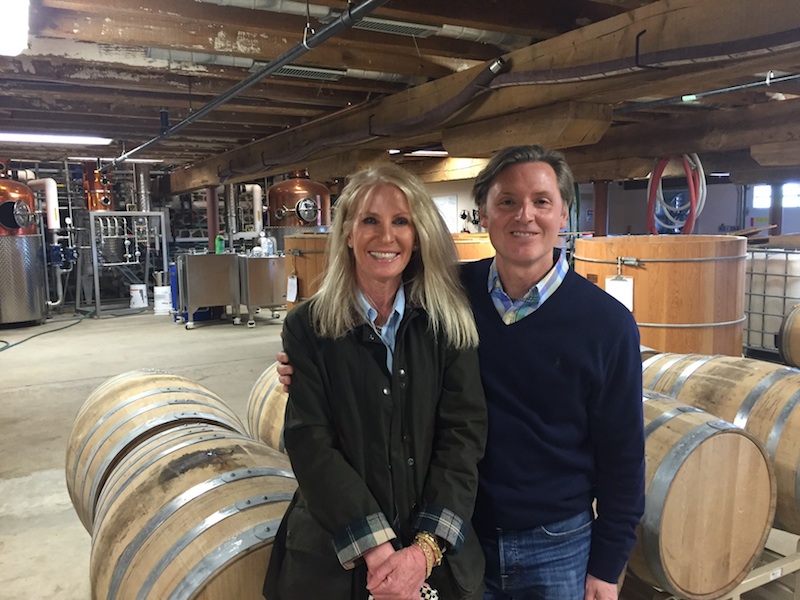 When it opens mid-May(ish), BBD’s on-site tasting room/bistro looks well worth the half-hour drive from Malvern. The plan is to pour flights, shots and craft cocktails so folks can taste BBD’s bourbon and “Revivalist Gin” that’s being distilled in four flavor “expressions.” A chef from San Fran will whip up charcuterie and small plates. “It’ll be totally unplugged. No TVs – old school,” says Don. Outdoor seating and a grove of apple and juniper trees – grow-your-own-botanicals – are also in the works.

Post-tour, we sampled the gin and bourbon. Loved them both: smooth and aromatic, no tonic needed.

BBD will also rent itself out for a spirited, private parties: enjoy a distillery tour then belly up to the hand-hewn bar. 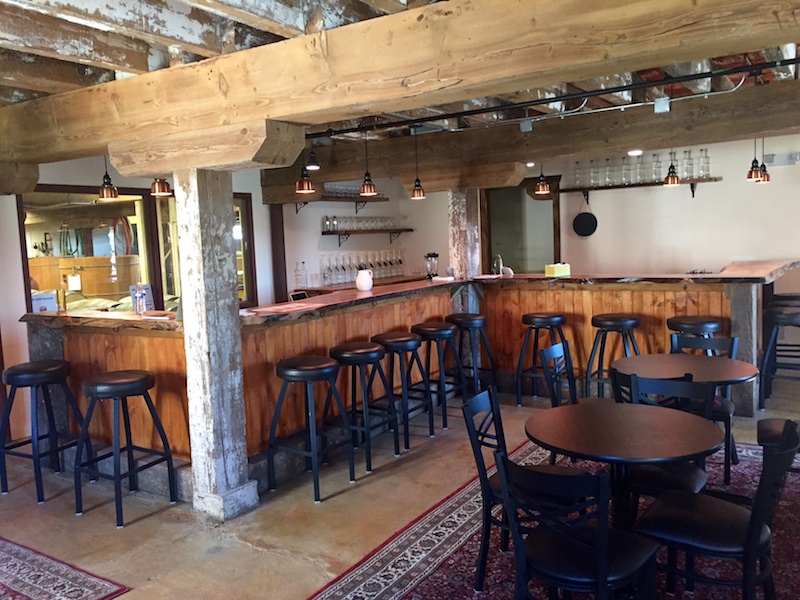 The cozy tasting room/bistro is outfitted with a hand-cut copper ceiling, bar and tables crafted from Main Line timber, and soft seating in cozy corner.

But the bistro and Brandywine Branch swag (being crafted by Wayne’s own Waltzing Matilda) are mere distractions.

The main event here is grain-to-glass manufacturing of artisanal gin and bourbon (with other spirits likely to follow): mash, ferment, distill, blend, bottle and ship to bars and restaurants across town and across states. Wine-size bottles (750 ml) will retail for $39-$50.

Besides the Wayne Art Center, let’s see: we’ve got Color Me Mine pottery, Painting With a Twist (so hot it had to expand), and, now downtown’s newest DIY destination, Christine Shirley.

Truly, we don’t know which is cuter (or more chipper): the 11’ by 30’ jewel-box store or its nymph-like owner, Paige Sullivan. 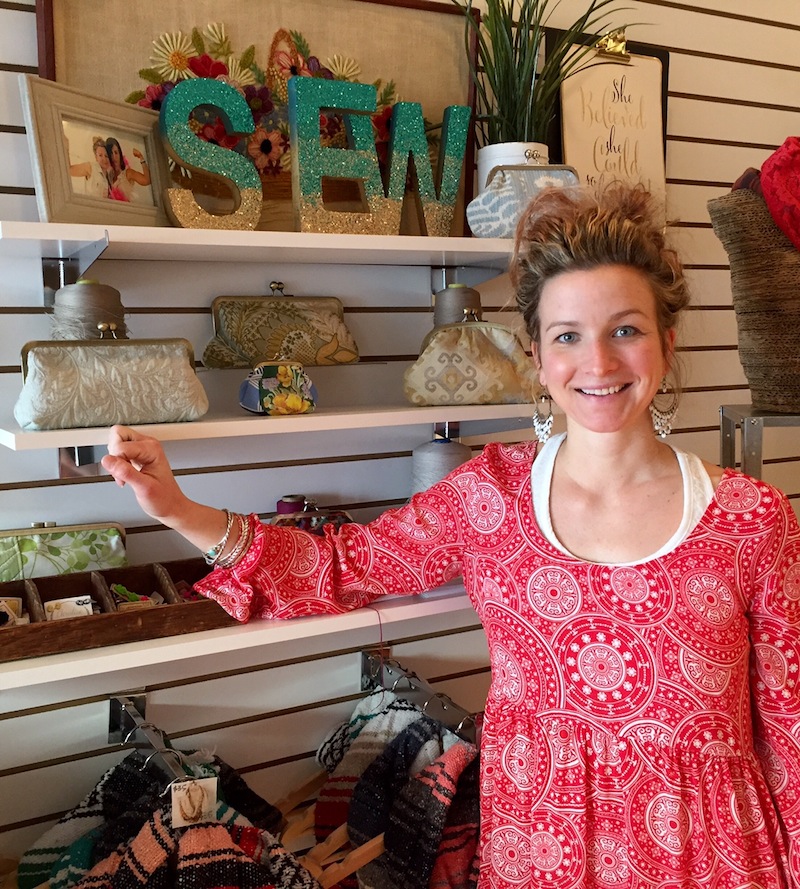 Paige Sullivan in her pint-sized Wayne shop where she leads sewing classes and brings in guest instructors for crafty workshops.

Regulars at Wayne’s White Dog Cafe will recognize Paige – she was GM and still works there 44 hours a week.

But as loyal as she’s been to the Dog, it’s her cute-as-a-button sewing/craft shop that sets her 32-year-old heart aflutter.

See, Paige has been sewing up a storm and dreaming of owning her own storefront for years. (For the record: Christine is Paige’s middle name and she grew up on Shirley Drive in Lebanon, PA).

Helping to defray the rent is Paige’s counselor friend, Dina Previti, who offers therapy part-time in a cozy rear room.

Clients, ages 8 to 80, come in for the hands-on help. But they come back for the camaraderie. (And sometimes, Dina’s counseling.) 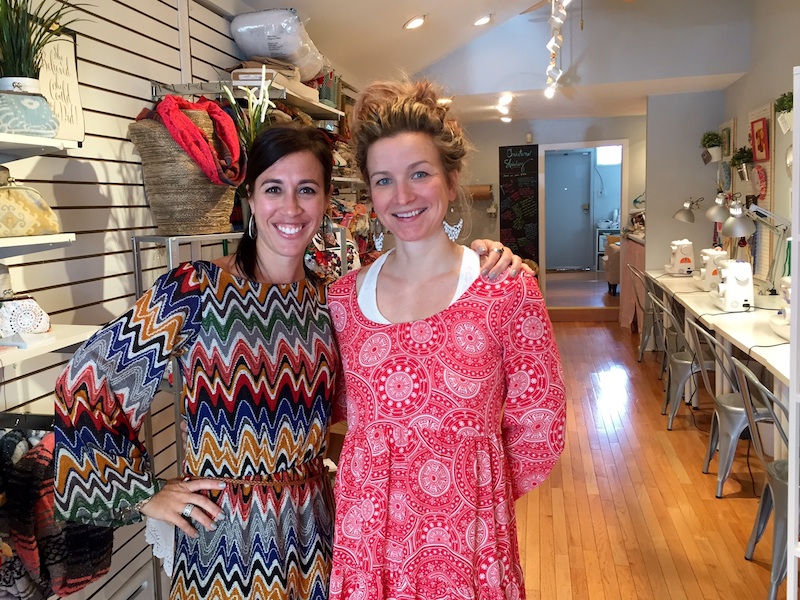 “I’ve had women come in here, stand in front and start crying, saying this place just feels different,” Paige tells SAVVY. “To me, there’s nothing more flattering than that.”

Paige and Dina call Christine Shirley “a modern day’s women’s club, where women feel safe and supported. It’s like a barbershop but it’s not about gossip.”

Devoutly faithful, the two admit “they’re not here to make a zillion dollars” but know “it’s different here.” Says Paige: “We believe this place is a gift to us.”

A smattering of style news:

Posh Collections will double in size this summer, taking over the adjacent Malvern School of Music on King Street. The boutique will spiff up its space and add Ivanka Trump and Marc Fisher shoes and shades, among other lines.

Gingy’s is growing, too, but in Rhode Island. The Malvern-based women’s fashion boutique just opened on Newport’s famous Bellevue Avenue in primo space next to the Tennis Hall of Fame. 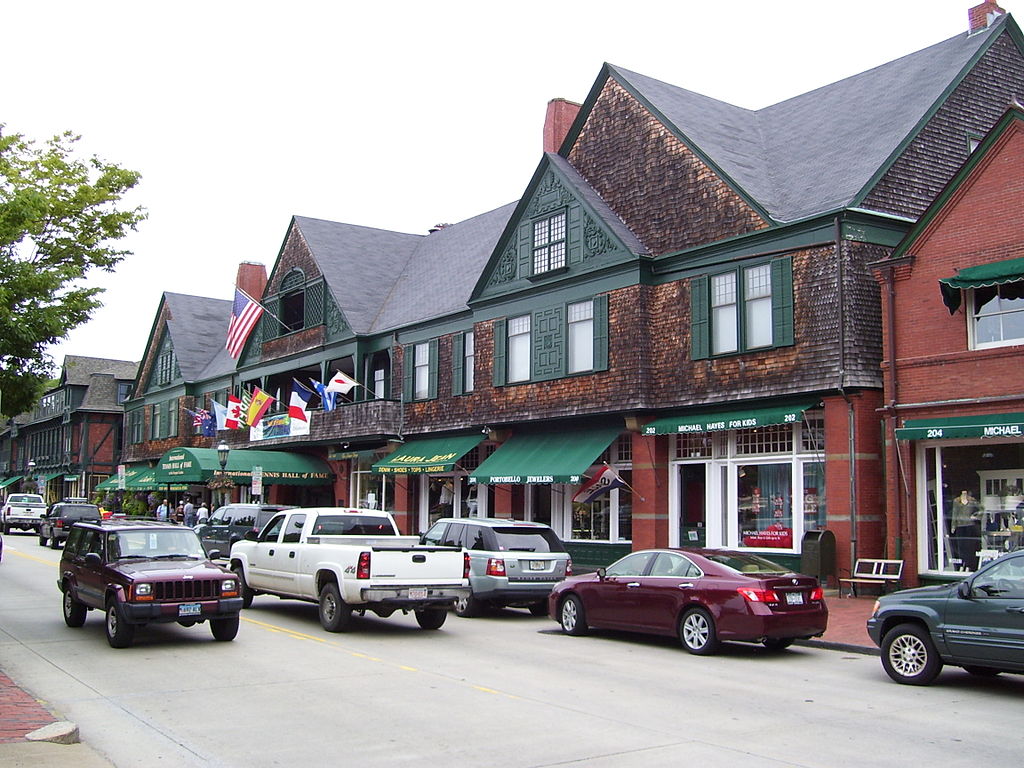 Gingy’s third outpost is in the historic Newport Casino, next to the Tennis Hall of Fame on Newport’s Bellevue Avenue.

Owner Jean Gilpin Tremblay has a soft spot for Newport and for good reasons: It was her mother’s hometown; her great grandfather and great uncle had jewelry shops on Bellevue Ave.; Jean’s father, a Navy vet, met her mom when he was stationed in Newport; and Jean and husband Don were married in Newport 35 years ago. The store will carry Jean’s own Jean G. dress designs, Sail to Sable, Julie Brown and other brands.

In other Gingy’s news, nasty Jonas clobbered the Stone Harbor store. A rehab is in progress and all systems are go for a Memorial Day weekend opening.

Scout and Molly’s boutique next to Paoli Hardware has a nifty new promotion. Host a shopping party for your gal pals and get a $150 gift card plus a discount. Nice.

Walter J. Cook Jewelers in Paoli celebrates its 70th anniversary with a party April 29 and an “unprecedented” sale April 30 to May 14. 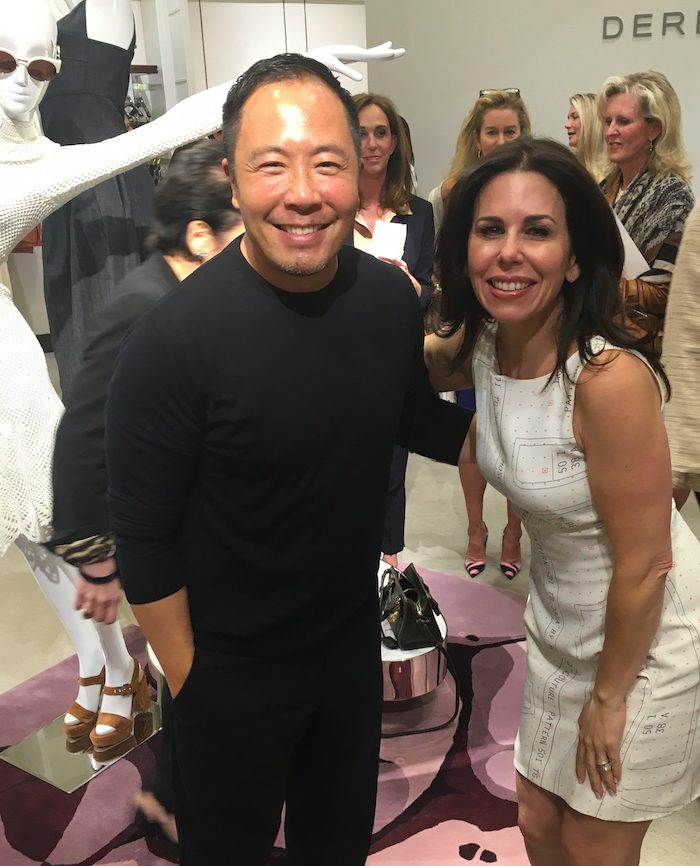 This time, the charity that’s racing to find a cure for Emily Kramer-Golinkoff’s cystic fibrosis, flies north to New York for the first time.

An “Exclusive Evening with EE” on Saturday, April 30, will feature death-defying aerial performances.

But we’re petty sure the real showstoppers will be speeches by always-eloquent Emily and her devoted brother, Coby. Click here to order tickets.

And finally, a SAVVY salute to Frolic Weymouth, who died April 24, just shy of his 80th birthday.

A Du Pont who was pals with the Wyeths, a founding father of the Brandywine Conservancy and Museum of Art, an accomplished carriage driver and fine artist, Frolic was the ultimate Renaiisance Man/Good-Time Charlie – and we mean that as a compliment. With the Radnor Races benefiting the Conservancy just a few weeks away, the Main Line misses you already, Frolic.