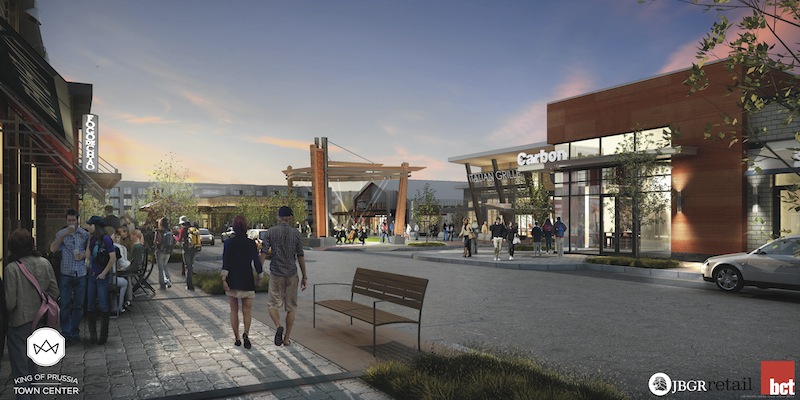 A schematic of the center’s Main Street.

Bring it on! A hipper, more community-oriented cousin to our sprawling mall, the King of Prussia Town Center is finally beginning to take shape next to Wegmans.

When the construction dust settles next summer, get ready for a 21st-century dining, shopping and hangout hub unlike any the area has seen.

The idea is to bring a downtown experience – with lots of outdoor noshing, free entertainment and upscale retail – to the boring old burbs.

“This is the wave of the future. We’re creating an experience that the customer wants to come back to, an experience online shopping can’t replace.” So says Tom Sebastian, VP of development and project manager for the site’s developer, JBGR Retail.

And after studying the plans and chatting with Tom, I’m inclined to agree.

The centerpiece of JBGR’s plan is a “town square” on Main Street: a manicured lawn with a performing arts pavilion hosting free live music, movie screenings, holiday events, morning yoga, you name it. (There’s even talk of installing an ice rink at some point.) 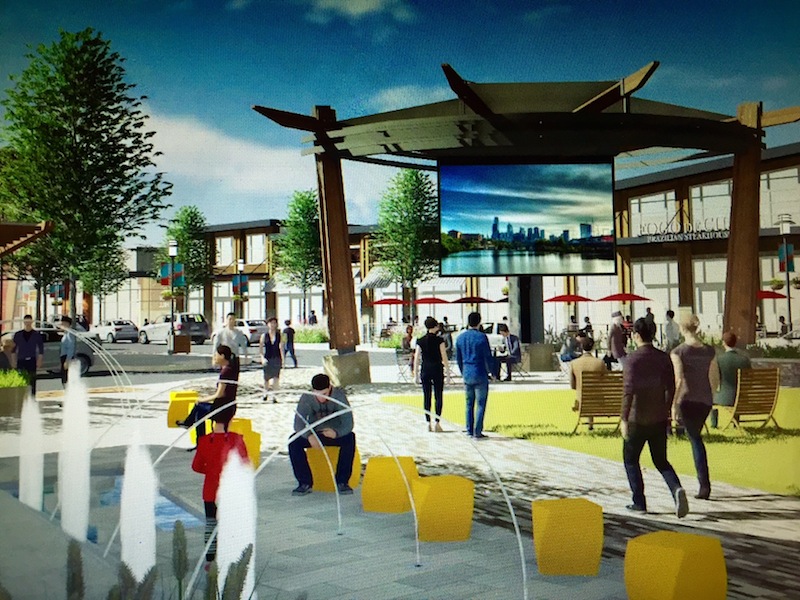 A schematic of the central square and pavilion (from a JBGR Retail video).

Keeping things lively will be splatter-proof shooting fountains, serpentine walls of fire, and a water feature with granite blocks for kids to jump across. (No worries: the pools will only be 6-inches deep.) To supplement the center’s “moveable seats,” the square will be BYOB (bring your own blanket – or yoga mat) with sufficient green space for “several hundred.” 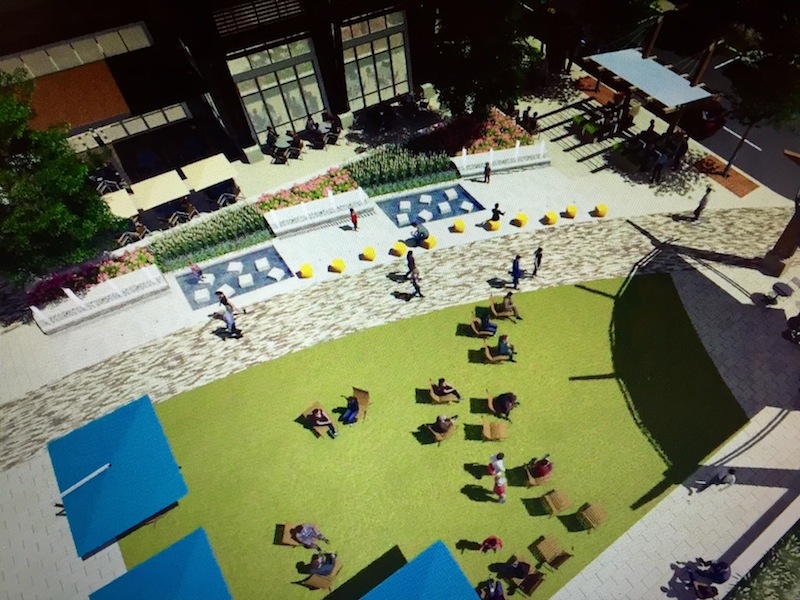 An aerial sketch of the central green (above) and walls of fire (below) from the video. 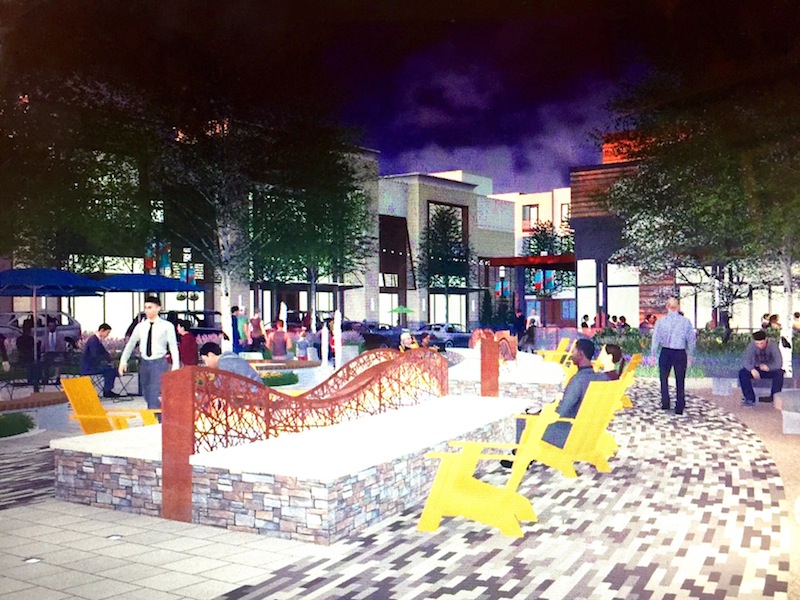 The patios of three new-to-the-burbs restaurants – Paladar Latin Kitchen & Rum Bar, Old Town Pour House and Davio’s Northern Italian Steak House – will ring the square, so al fresco diners can soak up the live music and people watch. The patio of the Brazilian steakhouse, Fogo De Chao, will also face the square but from the other side of Main Street.

And score one for gals in heels: valet parking will be available for a “nominal fee.” 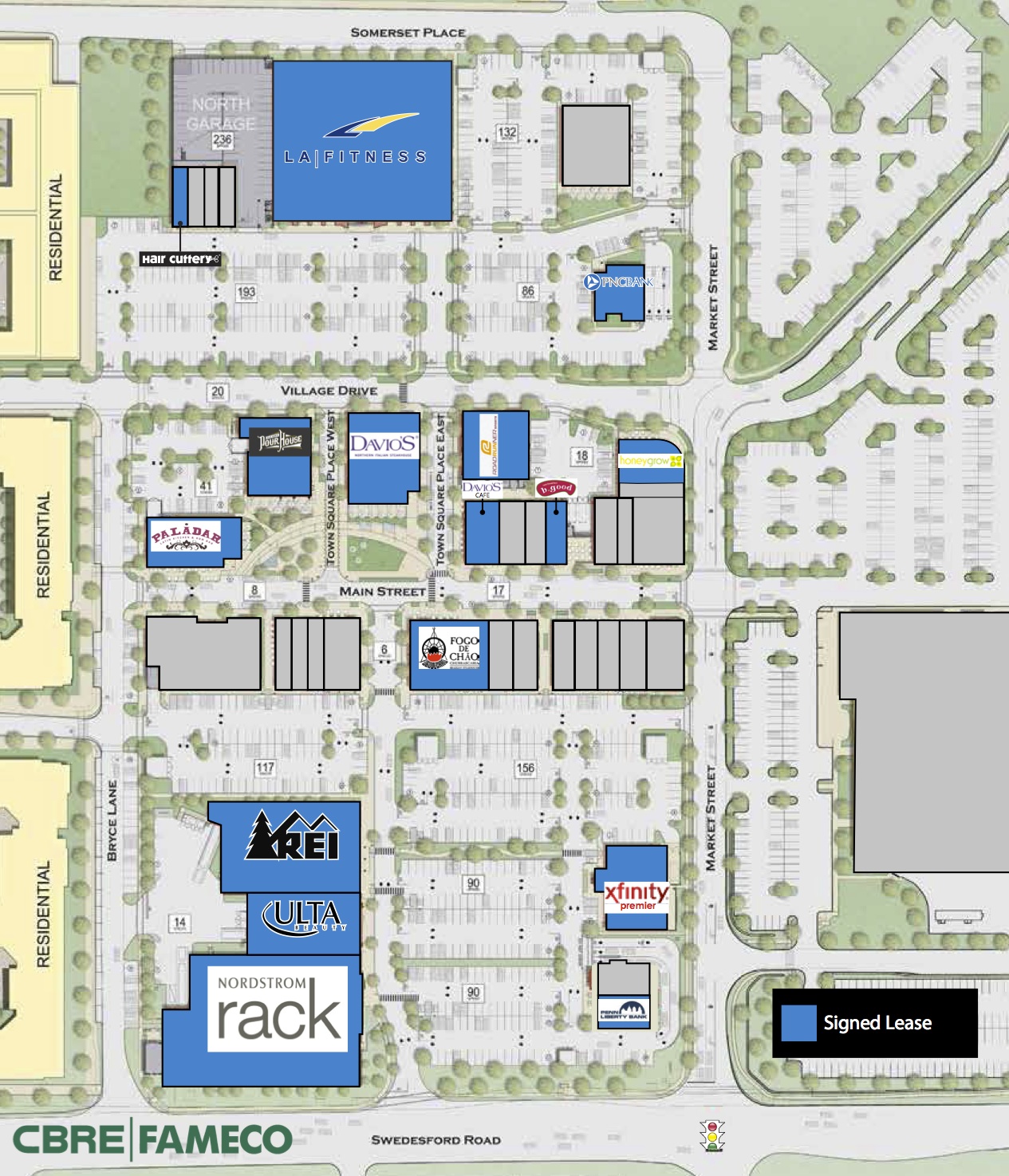 A site plan showing signed leases (as of mid-November).

According to Sebastian, King of Prussia Town Center will become “the downtown corridor for Upper Merion,” a township that’s never had its own downtown. (Sorry, the food court at the mall doesn’t count.)

Indeed, JBGR has already talked to Upper Merion about moving its Saturday farmer’s market from the township building to Main Street.

The $100 million, 20-acre project is part of the huge Village at Valley Forge mixed-use development of the old Valley Forge Golf Course, which will eventually include apartments, offices, a hotel and the already-open CHOP building and Wegmans. 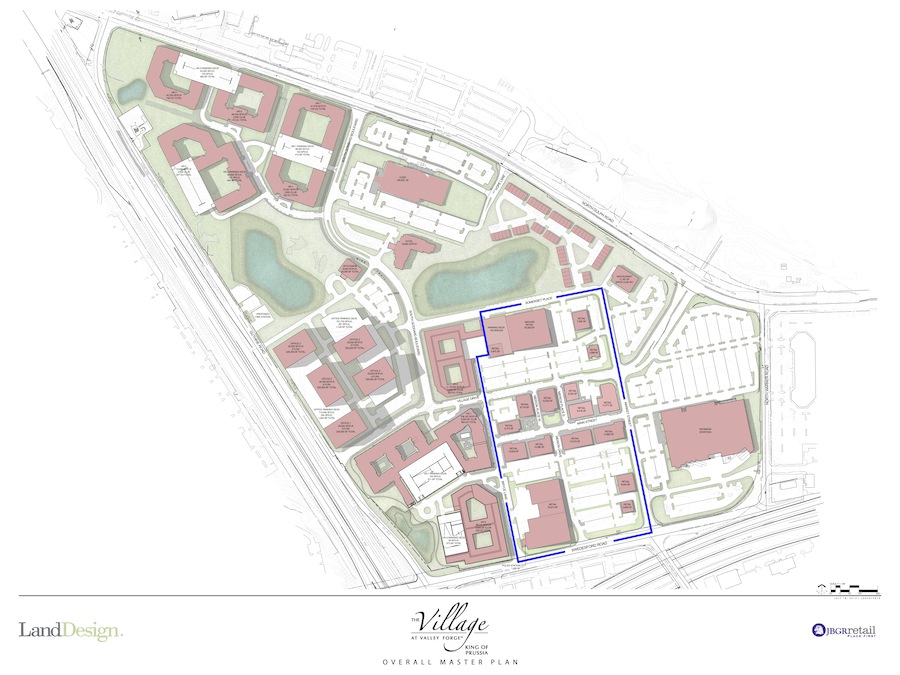 Maryland-based JBGR Retail has developed more than a half dozen similar “lifestyle centers,” most in the DC area. With apologies to Eagle Village Shops and Suburban Square, Sebastian says his company scoured the Main Line and found nothing that approaches the distinctive styling, first-class building materials, landscaping and ambience of a JBGR center. 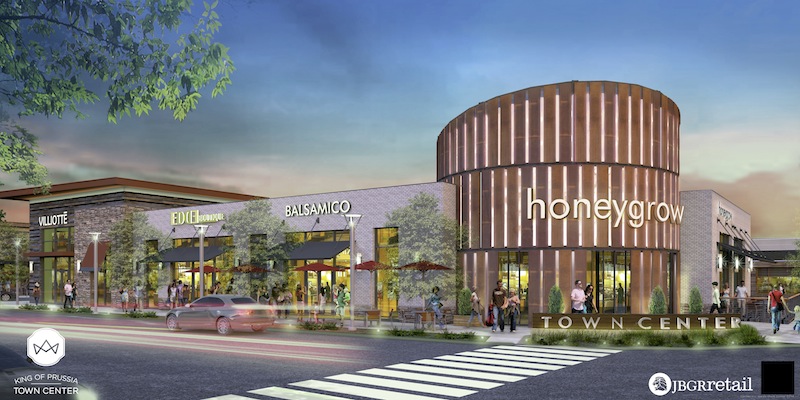 With malls falling out of favor – King of Prussia’s being a notable exception – outdoor centers are back in vogue, focusing on stuff not available online: food, fitness, coffee, hair, nails, and to a lesser degree, fashion.

LA Fitness (with a parking garage next door) will occupy the largest building. At 45,000 square feet, it’ll be gigantic but only a third of the size of the mammoth Life Time Fitness “resort” headed to neighboring Tredyffrin. 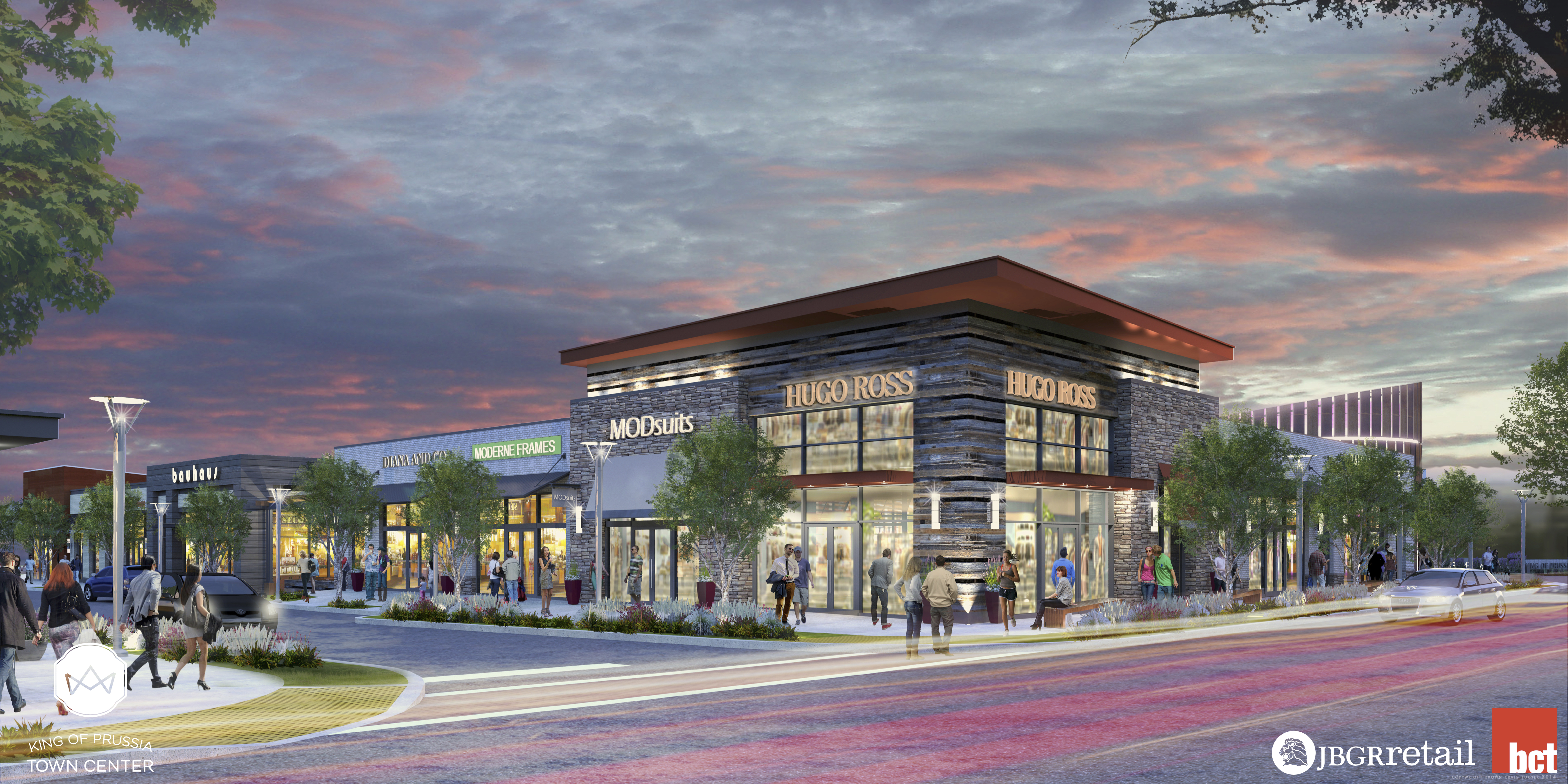 When all tenants are signed, the Town Center will have 11 restaurants, six of them full-service and five fast-casual.

Instead of mid-market Applebee’s and Outbacks, the project is leasing only “unique, downtown-quality restaurants,” Sebastian told me.

He called Davio’s, which is chef-owned, “the best Italian restaurant I’ve ever dined in.” At 9,000 square feet and with more than 300 seats, the town center’s Davio’s will be the chain’s second largest.

Paladar, he said, will serve the “best dishes from Cuba, Brazil, Mexico and Chile and will have “a very active bar and patio.”

Chicago-based Old Town Pour House will offer 100 craft brews on tap, many of them local, along with American cuisine in a “high-end build-out.”

Fogo de Chao will offer its usual gaucho-style grilled meats (’til you drop) and premium salad bar with upscale ambience.

Complimenting the eateries will be a “special blend” of national, regional and local fashion, accessories and home furnishings stores. Signed to date: anchor tenants Nordstrom Rack and REI, as well as an Ulta Beauty, Road Runner Sports (sneakers/walking shoes), a Hair Cuttery and a couple banks.

To fill the smaller spaces, Sebastian told me the project’s leasing broker, CBRE, is “actively going to door-to-door to retailers we want to attract, stores that will appeal to the discerning Main Line customer.”

It all sounds pretty swell, right? But what about traffic? Sebastian talked about how the Main Line will arrive via Warner, Old Eagle School, West Valley and Swedesford Roads. “You don’t have to get on 202 and fight mall traffic to get here,” he said.

And when I asked if a township could ever have too much retail, he said the mall, because it draws people from neighboring states, would be a “magnet … we’re not competing head to head. People shop at the mall occasionally. But people go to Wegmans every week. We want our center to be part of people’s everyday lives.”

Construction (courtesy of Malvern-based IMC) is proceeding on schedule. Most major stores and restaurants should open next summer; a grand opening celebration is planned for the fall.

Click here to view a video about the project.