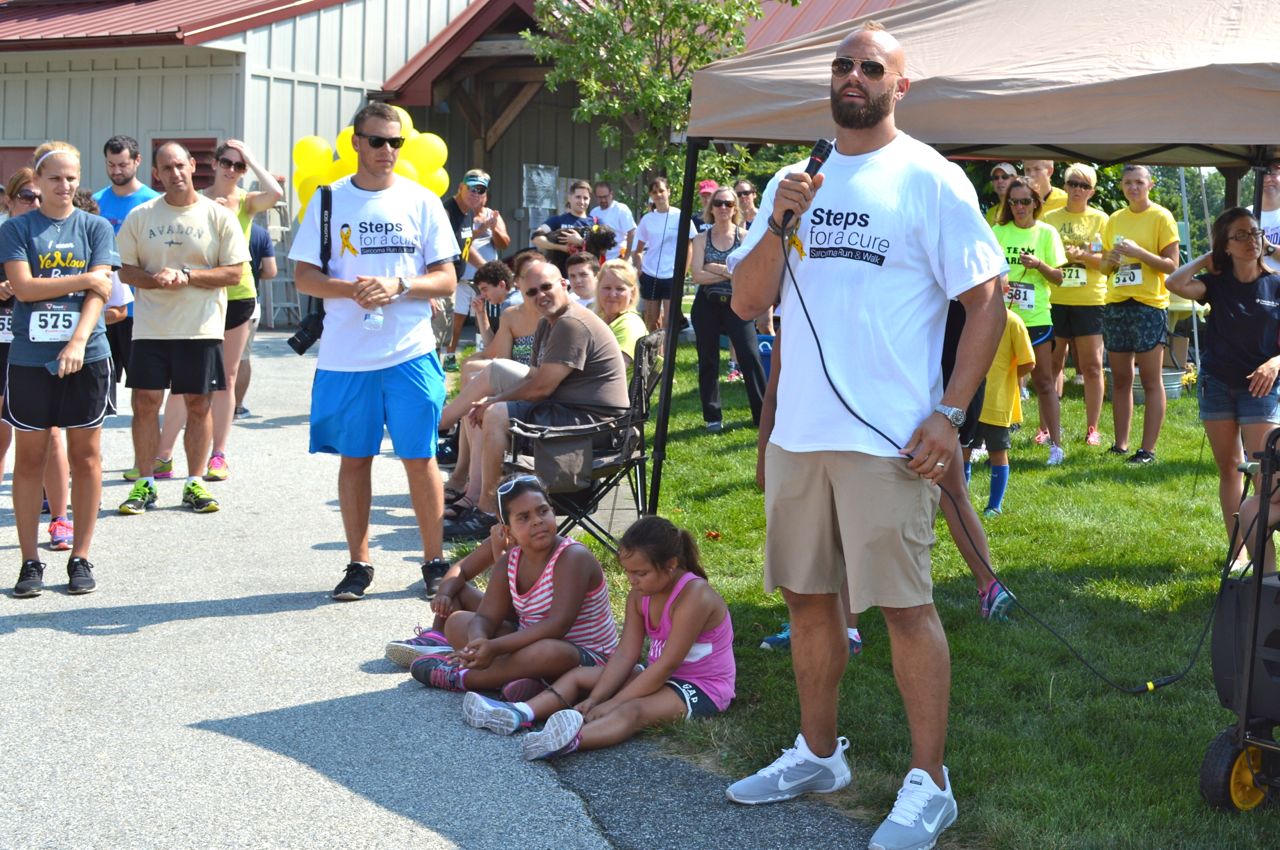 Any day I get a hug from hometown hero Mark Herzlich, the Conestoga/BC linebacker who famously overcame bone cancer to play for the N.Y. Giants, is a good day.

I had one yesterday when Mark and his lovely new bride, Danielle, joined fellow sarcoma warriors, family and friends at a “Steps For a Cure Walk/Run” at Chesterbrook’s Wilson Park. 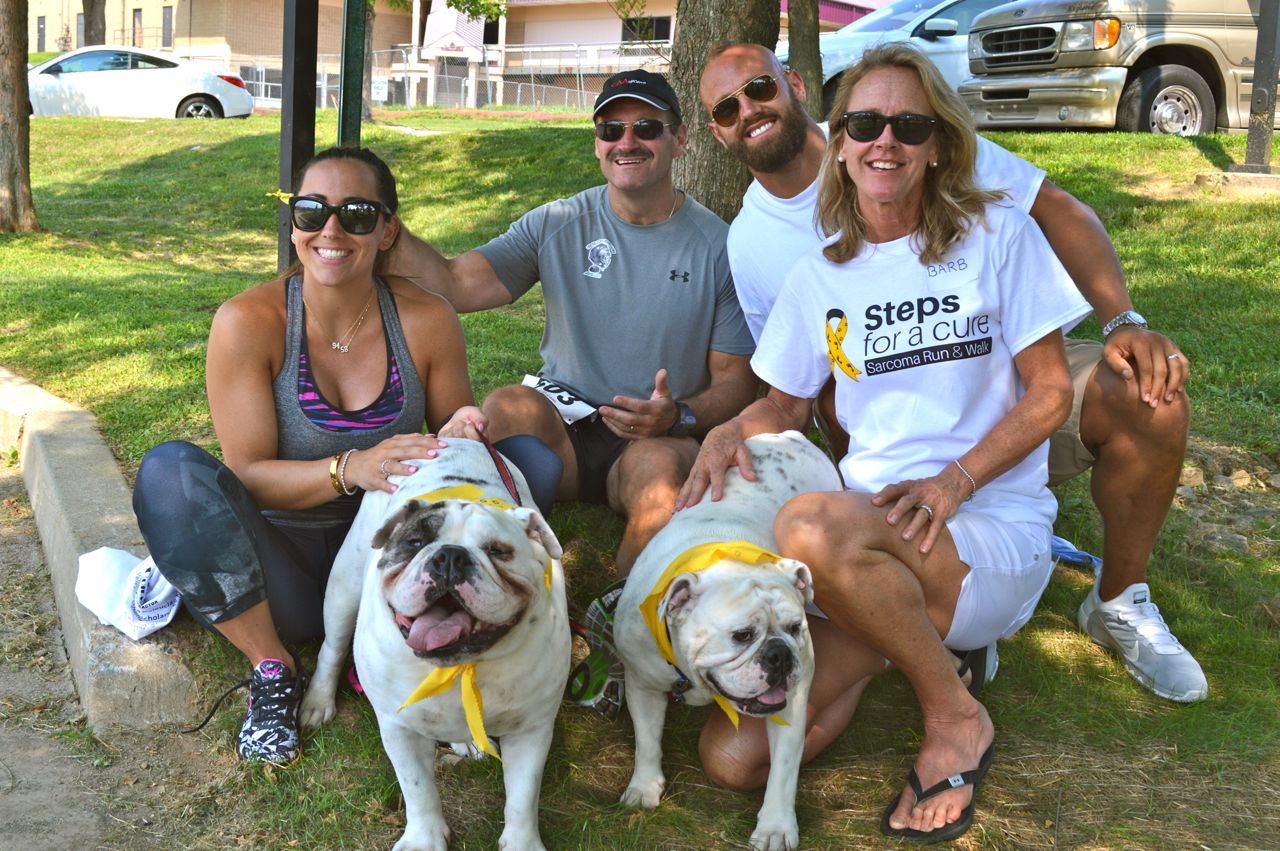 Mark and my son, Shane, were playgroup pals in their preschool days, so seeing Mark healthy and whole always warms my heart. He stood head and shoulders above his buddies even then; of course, he would grow up to wear a Giant-sized uniform. 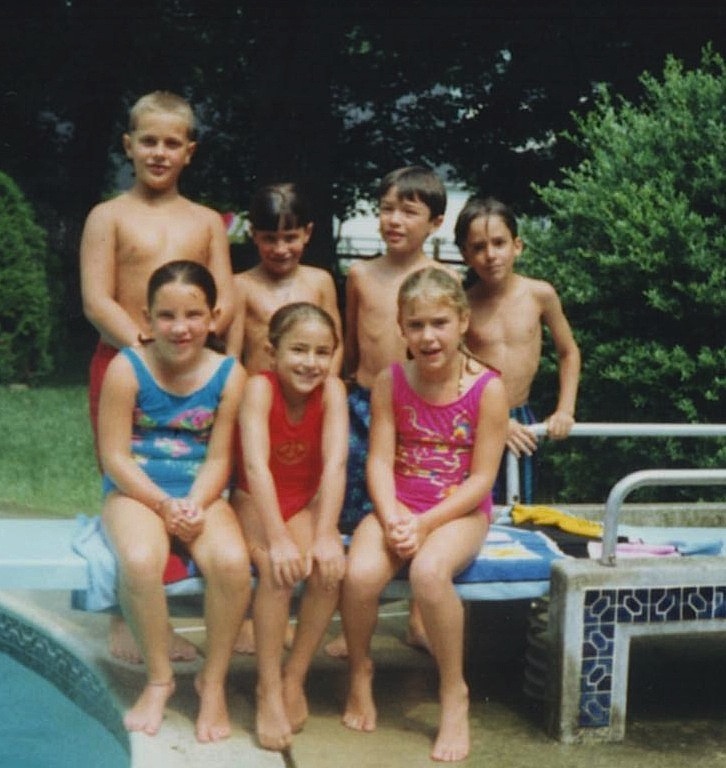 Mark told the crowd if he had been diagnosed five years earlier he might not have been standing before them. Still, there’s a long way to go before every warrior with this rare and insidious cancer becomes a survivor, he said. 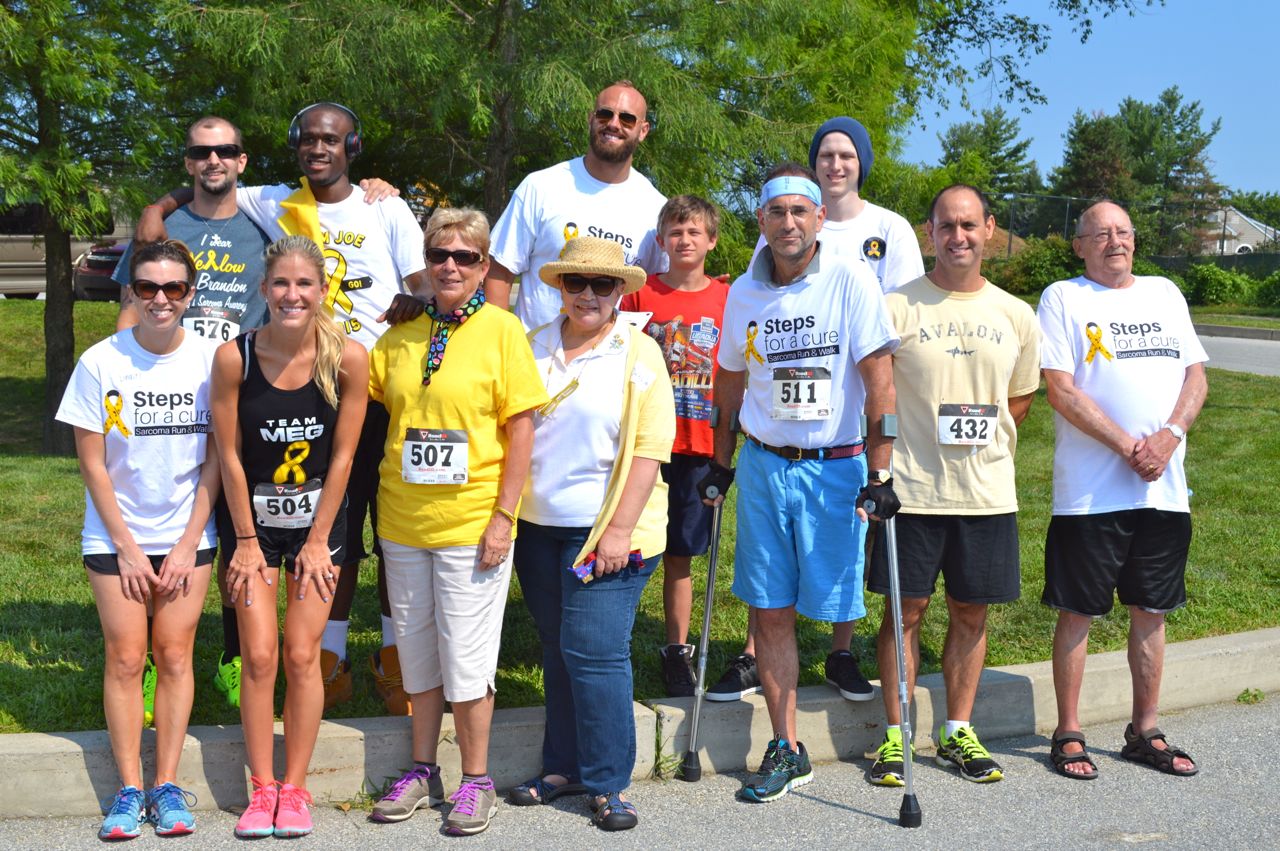 Mark signed his book, “What it Takes: Fighting for My Life and My Love of the Game,” (just out in paperback) and donated proceeds to the cause. 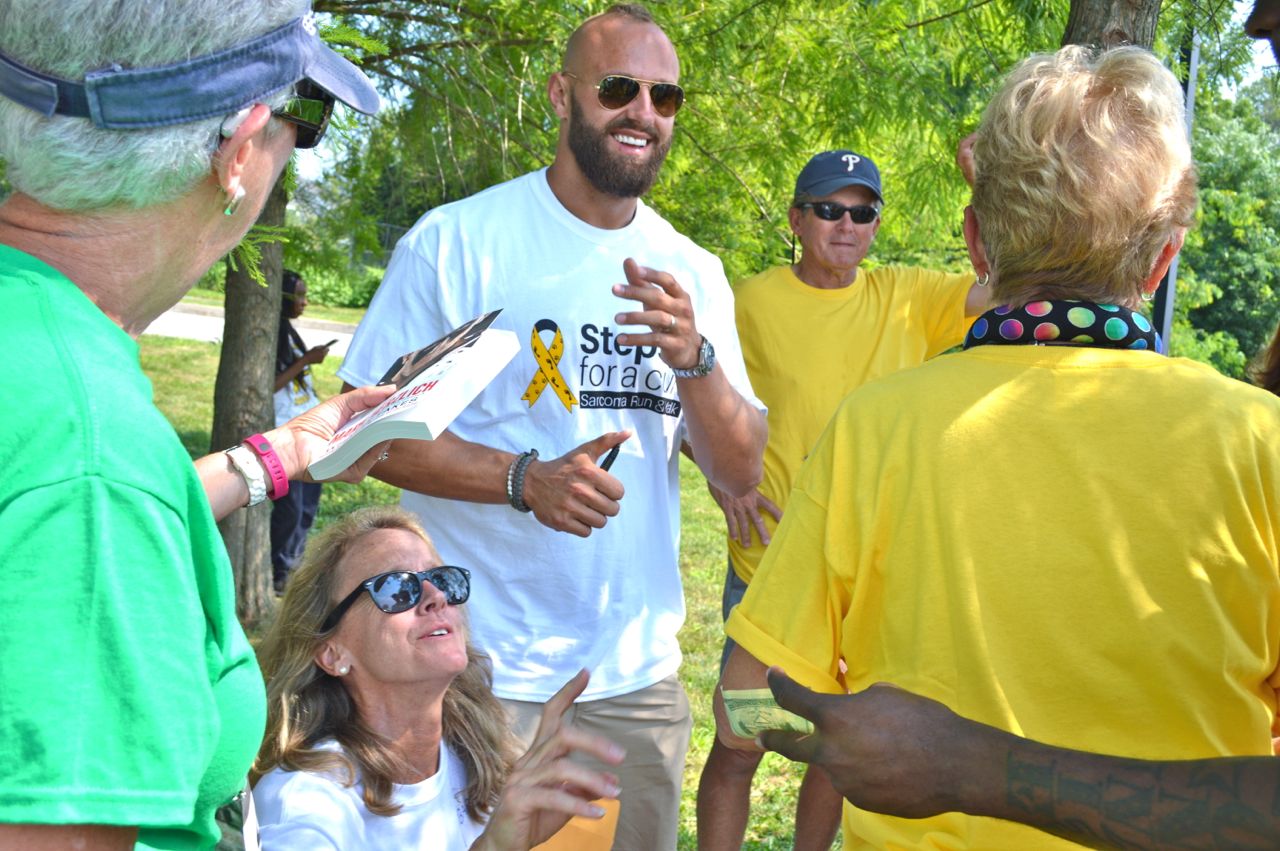 A swarm of supporters in green “fight to win” shirts (including a bunch of his ‘Nova buddies) stepped out for Pat. The Vanguard exec.,Villanova rugby coach and father of three has been battling sarcoma for three years. 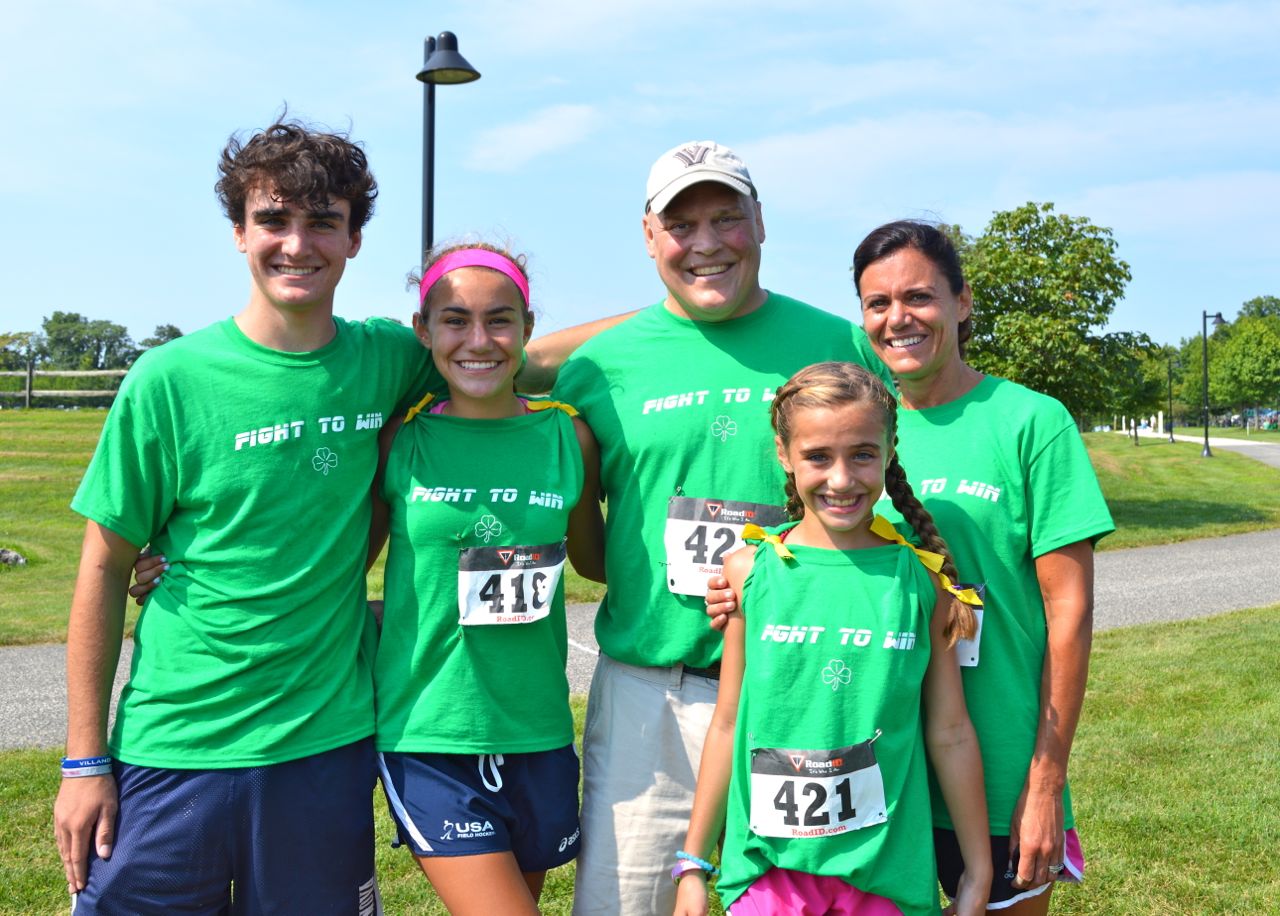 Supported by Penn Med, CHOP and Penn Vet (dogs get sarcoma, too!), Steps for a Cure raised nearly $25,000 for the sarcoma research fund at Penn’s Abramson Cancer Center. (Click here to add your donation.)

The walk/run was organized by the indefatigable mothers of two sarcoma survivors, Barb Herzlich and Lisa Dychala.

IN CASE YOU’VE BEEN HIDING UNDER THAT ROCK: HEROIN IS HERE!!!

While Lynne Twaddle sits in Chester County Prison unable to post bail, the rest of us are left shaken – and shaking our heads.

A message on T/E’s website reassures parents that “there is no connection between Waddle and any T/E students at this time.” It seems Twaddle was in big time, reportedly dealing to support her addiction. During Tredyffrin’s cops’ 4-month undercover sting, 250 baggies of heroin were scooped up. Another 80 bags – plus a handgun! – were found at her house on Pugh Road when police moved in Tuesday.

If last year’s “Main Line Takeover” school drug ring didn’t convince us we have serious drug issues in our own backyards, Twaddle’s arrest surely should.

Downsizing Main Liners are snatching up the new luxury condos being built on the grounds of the just-demolished Ardmore YMCA. Builder Cas Holloway tells SAVVY that 21 of 31 units at 100 St. Georges Lane are already under agreement; groundbreaking was held last week. 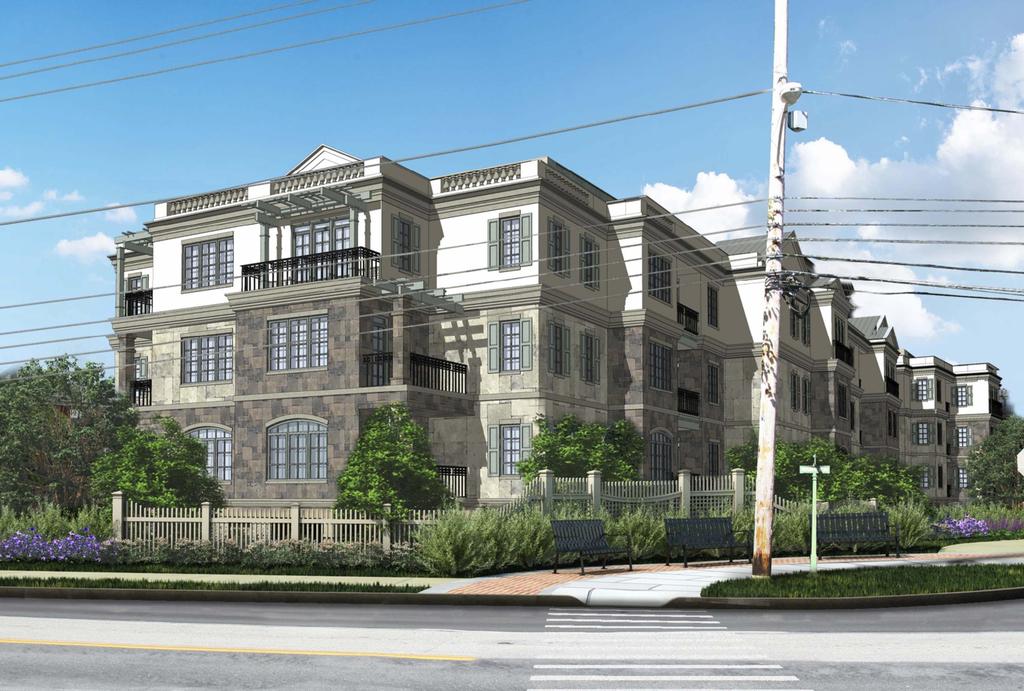 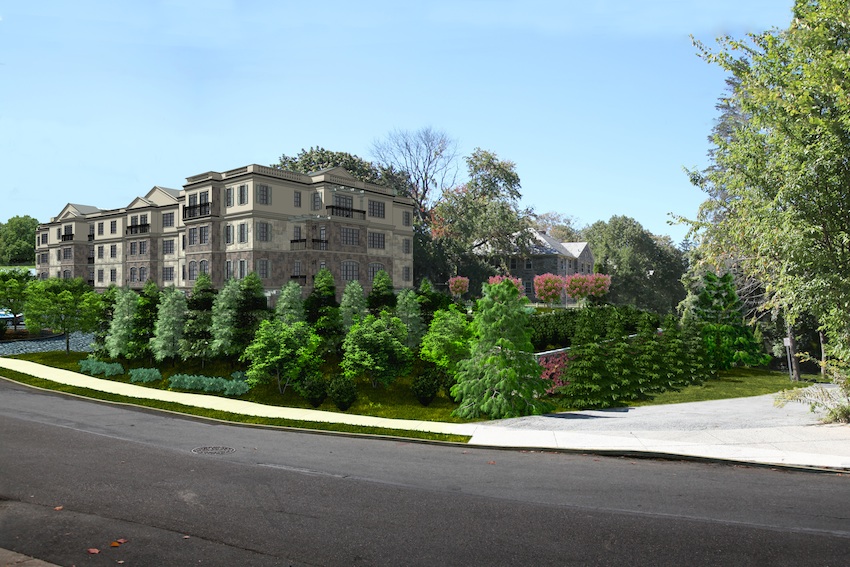 The view from St. Georges Lane.

The location’s a gem – a block from a 20-minute train ride to Center City, across the street from Suburban Square and a short stroll to downtown Ardmore. Other draws: two reserved underground parking spaces per condo and outdoor terraces or patios on all units. All but three condos have 3 bedrooms and 3 baths and most measure 2,400 square feet. Prices range from $950,000 to $1.45 million.

Holloway says buyers include folks who showed interest in his sold-out condo projects in Wayne (i.e. Jardin, Louella House and 102 Louella). If all goes well, the first residents of 100 St. Georges Lane should move in next summer.

The all-but-dead Pathmark in Berwyn should show signs of life Friday morning – but they won’t last long.

Slated for closure in parent company A & P’s recent bankruptcy filing, Pathmark will go dark Thursday night to prepare for a liquidation sale to begin at 9 a.m. Friday. 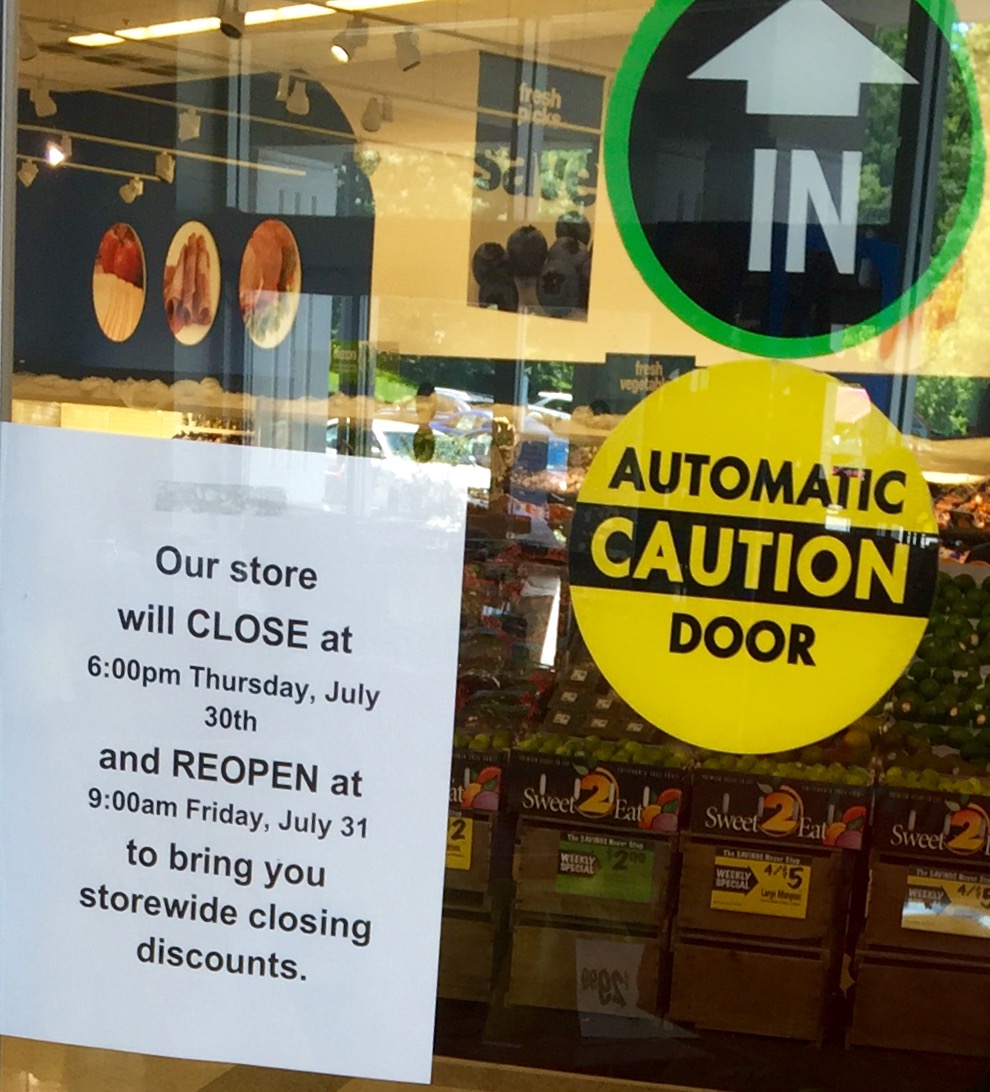 No one at the store or at A & P will talk about how many jobs will disappear. One thing’s for sure: the closure leaves a big ole empty box next to Swedesford Plaza, which still hasn’t filled the old Citibank end space. (And who the heck’s the anchor tenant now? Cuticle Corner? Cosi? Lotus Inn? Quincy’s Lobster Rolls?)

The news is better for employees of Superfresh markets in Wynnewood, Gladwyne and Havertown. The lackluster stores, also part of A & P’s bankruptcy filing, will be converted to Acme Markets.

And finally, a bittersweet farewell to my old go-to market, Genuardi’s. Wrecking crews will demolish the long-vacant Chesterbrook building Tuesday morning after a ribbon-cutting to celebrate the “rebirth of a broken shopping center.”