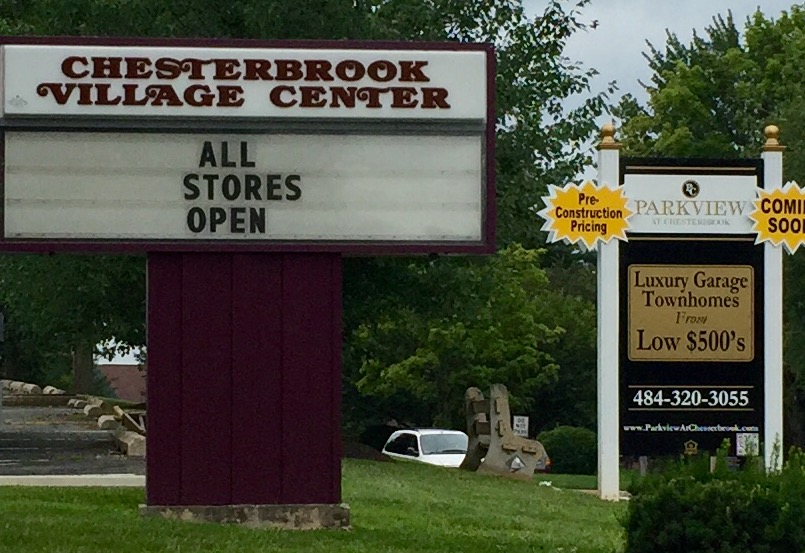 Ah, the steep price of beauty. Merchants at the Chesterbrook Shopping Center are paying it in spades this summer.

An unsightly, depressing mess after Genuardi’s closed in 2010, the center these days is even uglier, with chain link fences cutting off precious parking spots and earthmovers assaulting ears and kicking up dust. 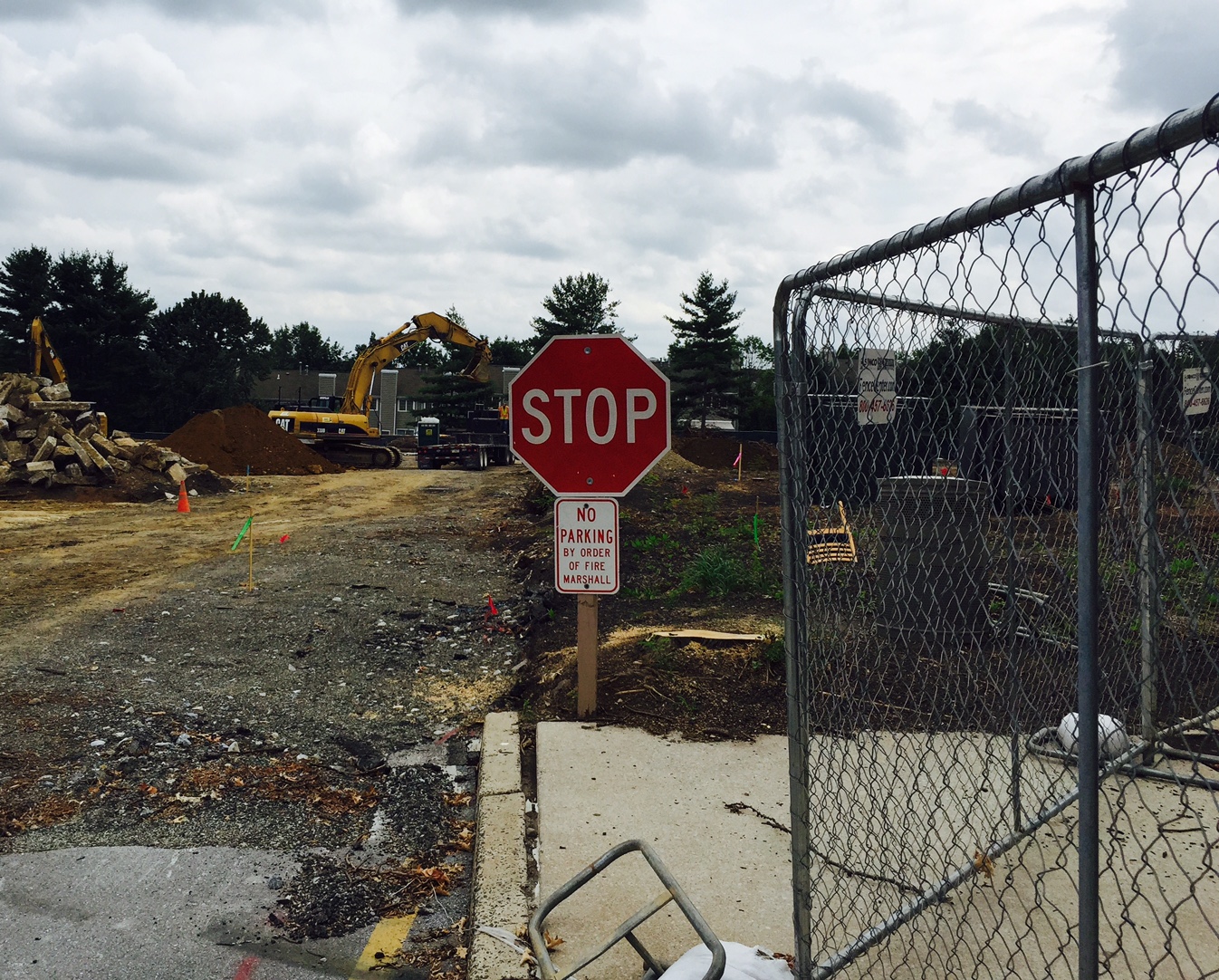 Under new ownership, the dowdy gal’s going under the knife: shedding tons of excess square footage and getting a long-delayed facelift.

The makeover should help the struggling center keep old customers and make new ones – key among them: new neighbors inhabiting 123 luxury townhomes that will soon engulf her. 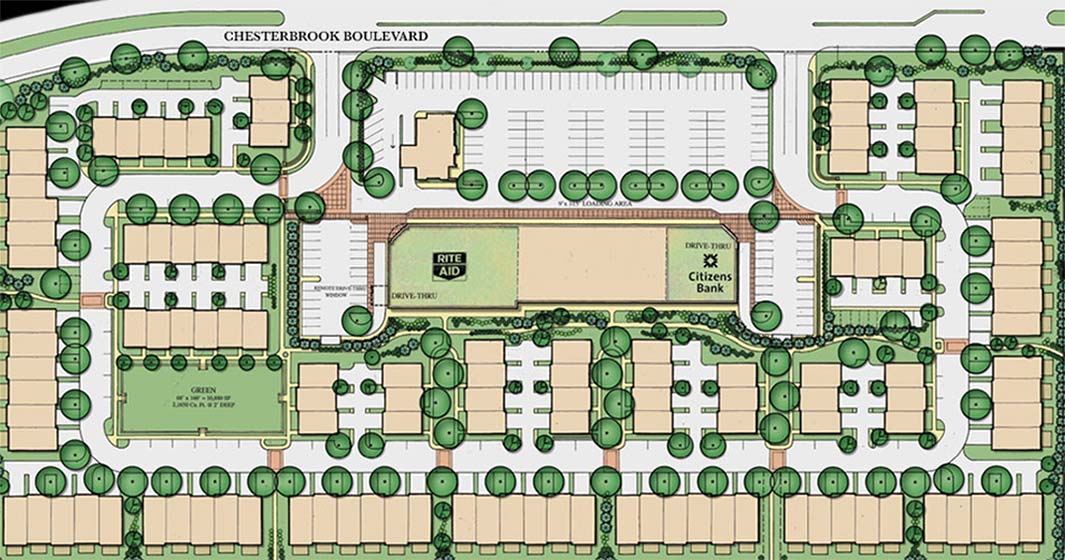 So say both Greg Lingo of Cornell Ventures, owner of the residential part of the project, and Diane Troisi, the “Diane” in Diane’s Sidewalk Deli. 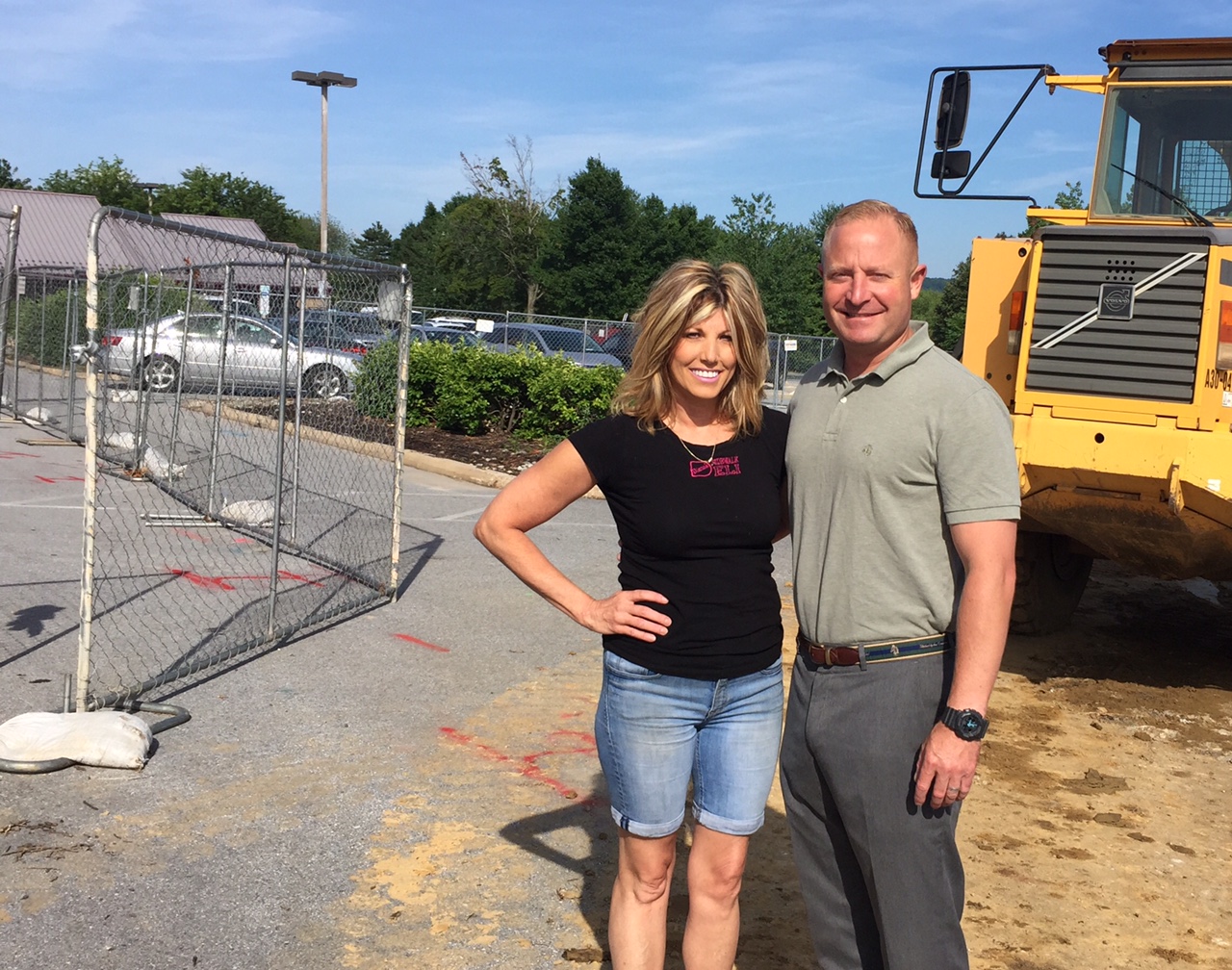 AKA the Mayor of Chesterbrook, Diane has been trading in mile-high corned beef sandwiches and local buzz for nearly 23 years. These days, she’s an unofficial realtor. A mural advertising Parkview spans a deli wall and she takes names of interested parties. 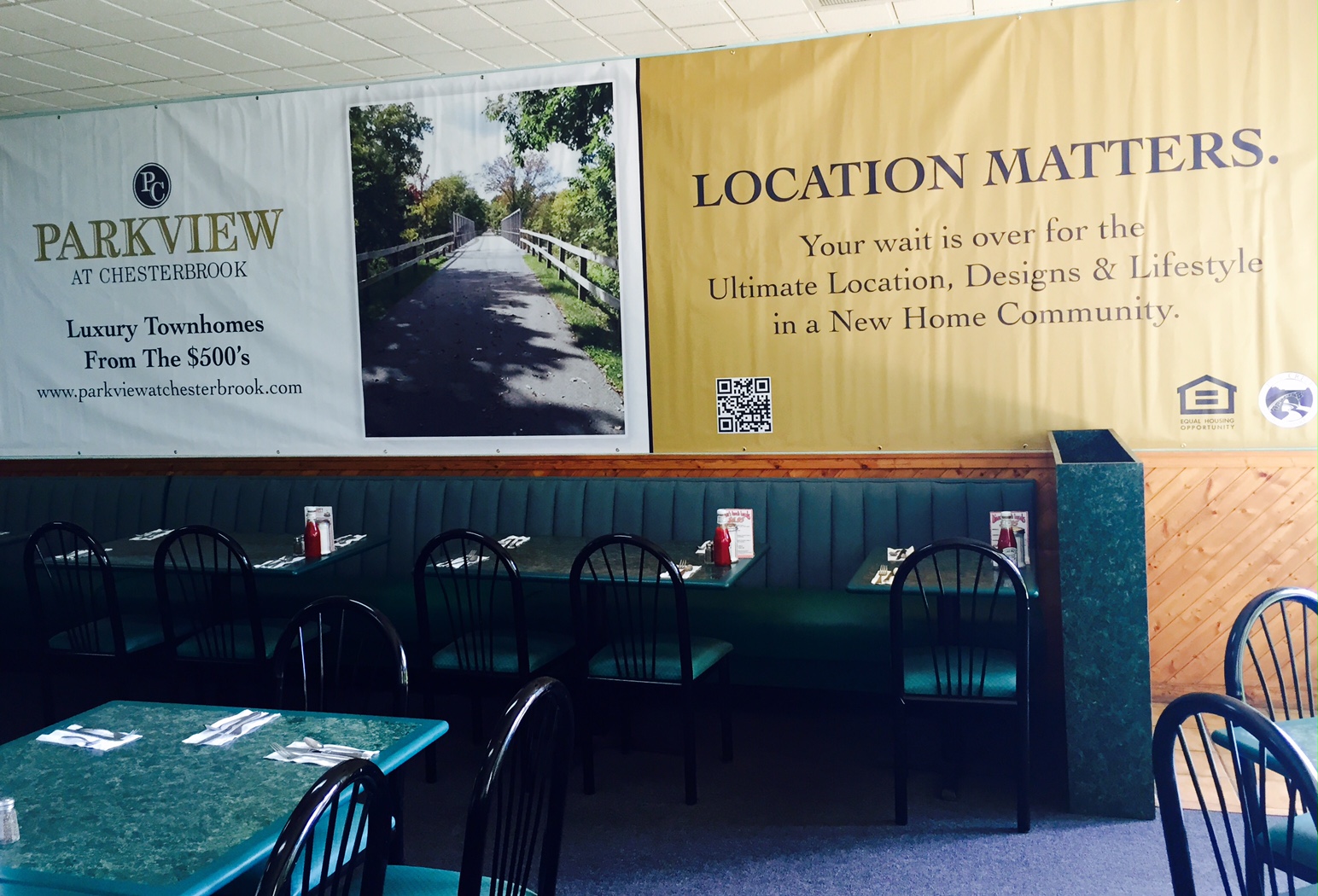 To jumpstart the project, Lingo has been inviting select potential buyers to Diane’s on Wednesday nights, circulating floor plans, and taking $1,000 holds on specific homesites.

Diane tells SAVVY that after three such dinners, 80 percent of Phase One’s homesites have holds on them. (The deposits are fully refundable within 5 weeks.)

A Wayne entrepreneur so smitten with his alma mater that he named two companies for her, Lingo’s Cornell Ventures hired Rockwell Custom Builders to erect the first new homes Chesterbrook has seen in 25 years.

Lingo says he’s still hiring the sales team, architectural plans are being tweaked and permits have yet to be pulled.

If all goes well, infrastructure (roads, sewer and power lines) will be installed before winter and the first homes will be up by late spring/early summer 2016.

So far, Lingo’s feelin’ the love. “The housing market is not fully recovered but the excitement over this project makes me feel like it’s 2004 again. It’s been a welcome surprise.”

Diane says all ages are plunking down holds – including couples with kids in tow and one eager investor who put deposits on three units. (A T/E official has informed SAVVY that Parkview children will attend New Eagle Elementary School, and not Valley Forge, like the rest of Chesterbrook.)

A drawing of Parkview’s largest model, the “Washington.”

Phase One (dubbed “Deli-view” by Diane) sits between Newport Village and the shopping center. Introductory prices range from $510,000 to $610,000: Other features:

*Three bedrooms, 2.5 baths, and two-car garages, either in front or accessed from a rear “alley court”

In the middle of it all, the shopping center overhaul is a doozy. 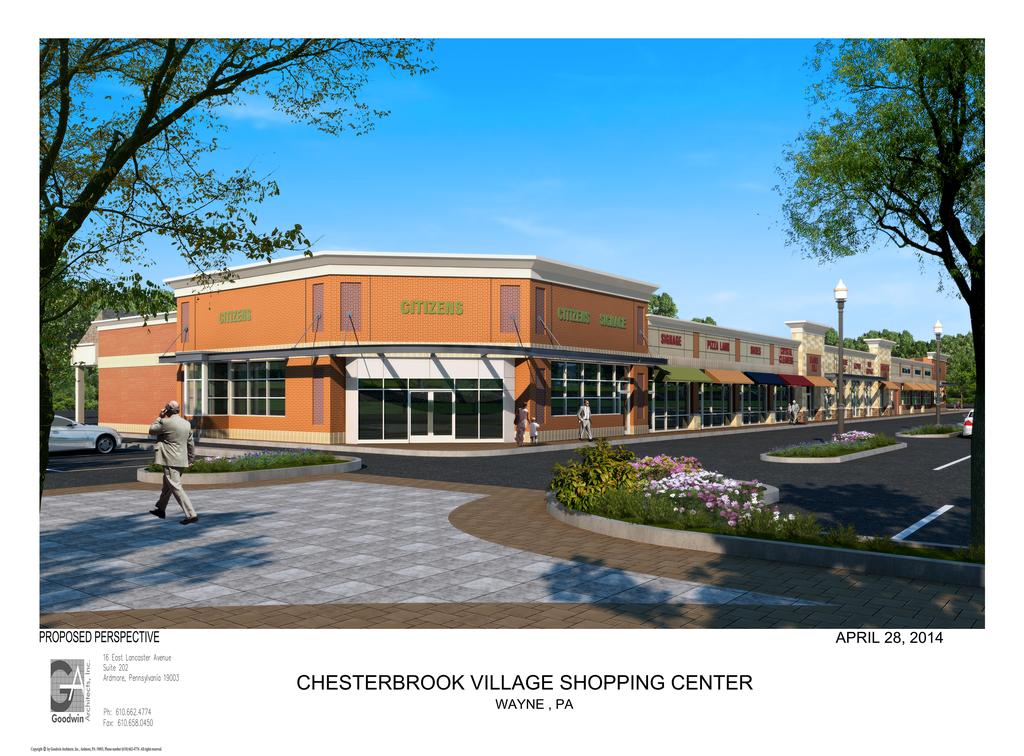 This time, Genuardi’s gets razed, along with the center’s entire back and side rows. The few shops toughing it out in the rear – Rite Aid, Expressions, Subway, Citizen’s Bank and Allstate – will get new digs beside Manhattan Bagel, the shoe repair guy, PizzaLand, Crystal Dry Cleaner’s and Diane’s Deli, all of which get turned around so their front doors open to the parking lot (duh!). Rite Aid and Citizen’s get drive-throughs and green roofs at their anchor spots on the strip’s ends.

The freestanding Wells Fargo branch gets a new façade too, so as not to bring down the neighborhood.

A bit of good news for cyclists/joggers: The builder has agreed to install a mile-long path on the other side of Chesterbrook Boulevard, linking the Chester Valley Trail (via an access road) to Valley Forge Park.

No stores will have to close for even a day, insists the (optimistic?) guy who’s overseeing the operation, Tredyffrin resident Bob Whalen of RW Partners.

Whalen tells SAVVY that the wrecking ball won’t swing until the remodeled center is finished. “Rite Aid will close one day and open in the new location the next,” he says.

The rehabbed center should be up and running in six to nine months. In the meantime, Whalen is asking for patience. “These businesses still really need customers. If people get through the aggravation of being on a construction site – the dust and the noise – good things are coming.”

With eight years left on the Deli’s lease, Mayor Diane is grinning and bearing it – barely. Her $6.95 eat-in lunch special usually spurs “lines out the door” but not this summer.

While some loyalists “make a point to come in because they feel sorry for me,” others don’t bother hunting for far-flung parking spots, especially when it rains. “Some of my customers only have half an hour for lunch. Why should they put up with this?” Diane laments.

She’s had to hang tough before, when big corporate tenants pulled out of Chesterbrook. This time around she worries that she’ll have to close entirely while the new façade is installed, as contractors bidding on the job have hinted.

Still, “the end will be a plus” and “worth it,” she says. One day, when she hangs up her apron for good, she’ll at least “have something to sell.”

For now though, with demolition crews coming, for Diane and anyone who works, shops or eats in Chesterbrook, things are likely to get a little worse before they get a whole lot better.

Wine Spectator toasts (in a good way) the Main Line in its August issue, awarding “Best Restaurant Wine List” honors to: Margaret Kuo’s, Nectar, Paramour, Savona and Yangming, and, in King of Prussia, The Capital Grille, Creed’s, Seasons 52, Legal Seafoods, Ruth’s Chris and Sullivan’s. Nectar and Paramour were singled out for “best of” honors, along with just 7 others in PA.

We were sorry to read about the ongoing travails of Devon homebuilder Ted Babiy and his wife, Anne Marie Quinn, in Sunday’s Inquirer – although they do say there’s no such thing as bad publicity.

So you can plan next July’s alfresco outing with less agita, Wayne serial entrepreneur Jay Ciccarone and Susan Steinbrink have partnered to create WeatherPlanner, a high tech, data-driven system that provides customized, year-ahead weather for websites. Some positive press for Ciccarone for a change.