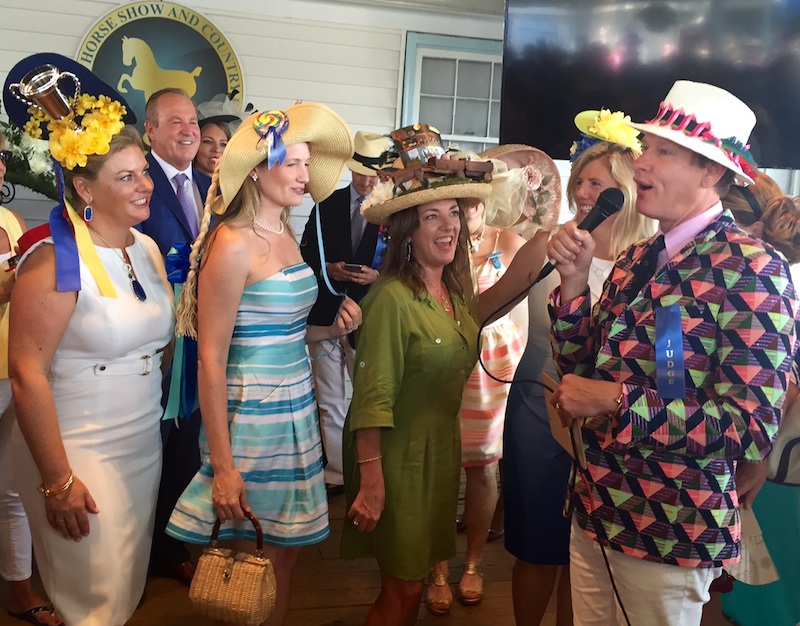 So, deepest apologies to the dedicated riders in the ring; our eyes were elsewhere.

A record number of hopefuls sashayed before a nine-judge panel.

The maddest hatters told us they’d been perfecting their ensembles for months; others claimed they’d just rustled something up that morning.

Sure, if you say so.

The parade was a study in stunning artiface. A few talked about rising at 4 a.m. for hair and makeup calls – beauty rest be damned. 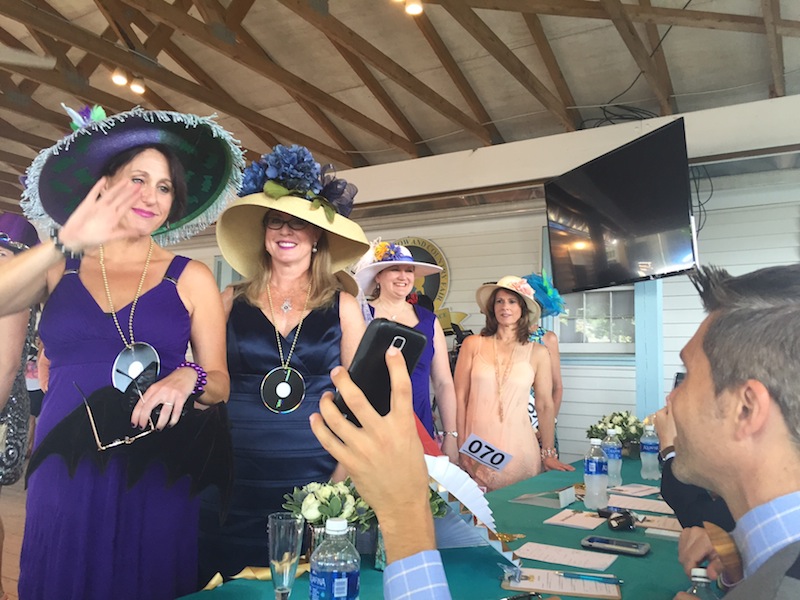 New this year: performance art. A contestant uncorking a bottle of bubbly – POP! – to herald her group’s arrival before the judges. Another handing out gold masks and coins to curry judges’ favor. (A Shark-Tank–Meets-Mardi-Gras moment?)

As usual, the winners took home some nifty prizes: keys to a Jaguar (but, alas, you have to give them back a week later), a Louella boutique shopping spree, a Tiffany bauble, tickets to a grandstand box.

Still, the real payoffs here aren’t bought and paid for. I mean who can put a price on a selfie with Carson Kressley  or a chat with cutie-pie weather guy Adam Joseph or your very own mug in Town & Country or Philadelphia Style or any number of media outlets, including this one.

OK, enough chitchat already. On with the hat parade. Here are some of the contenders that caught our eye: 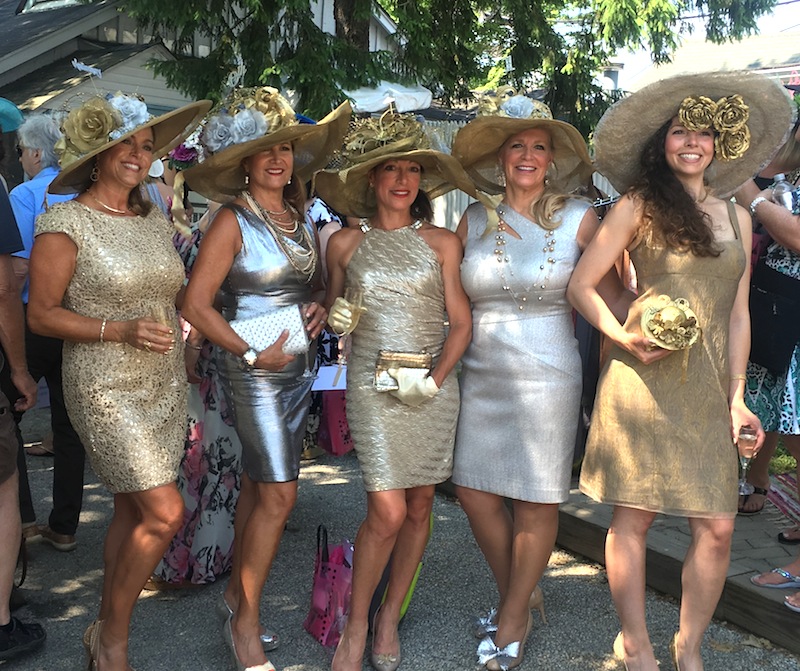 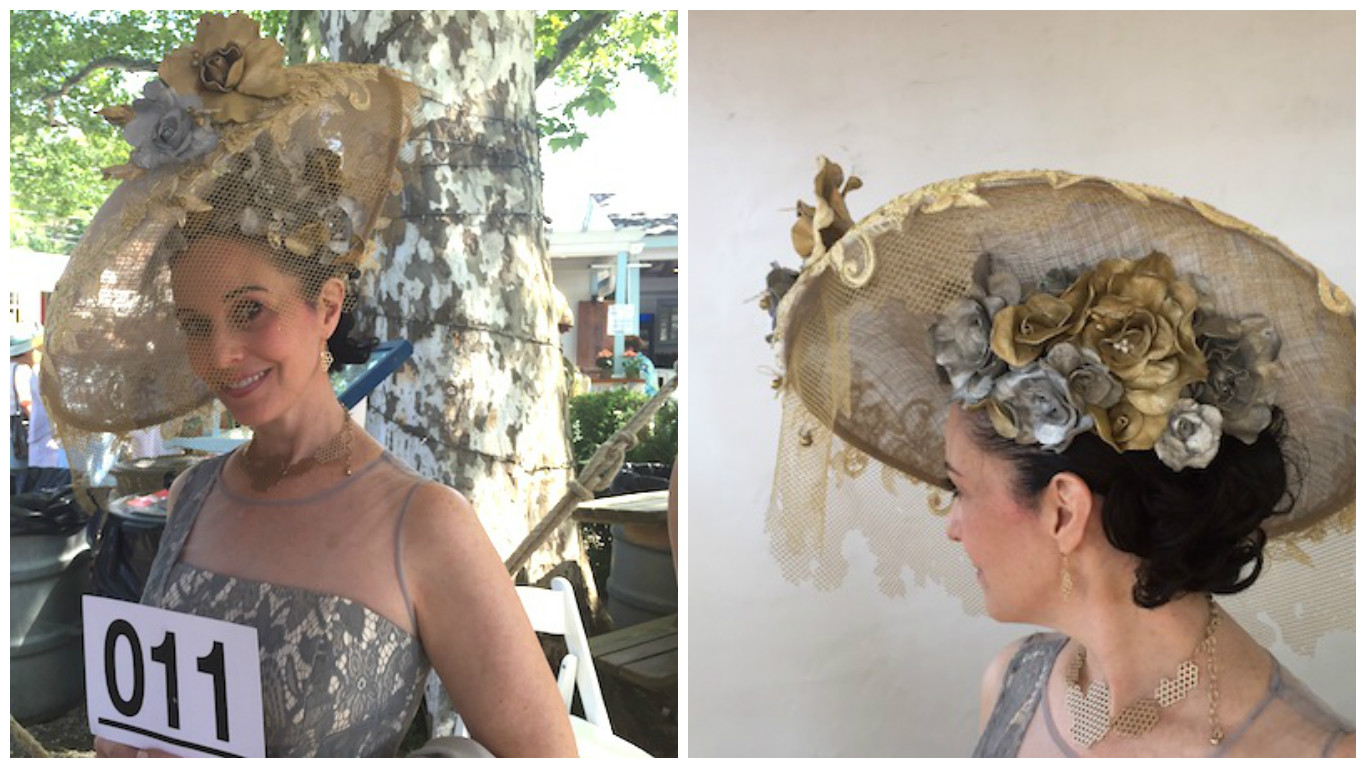 This sublimely handcrafted hat created and worn by Tiffany Arey didn’t win any awards, but many thought it should have. 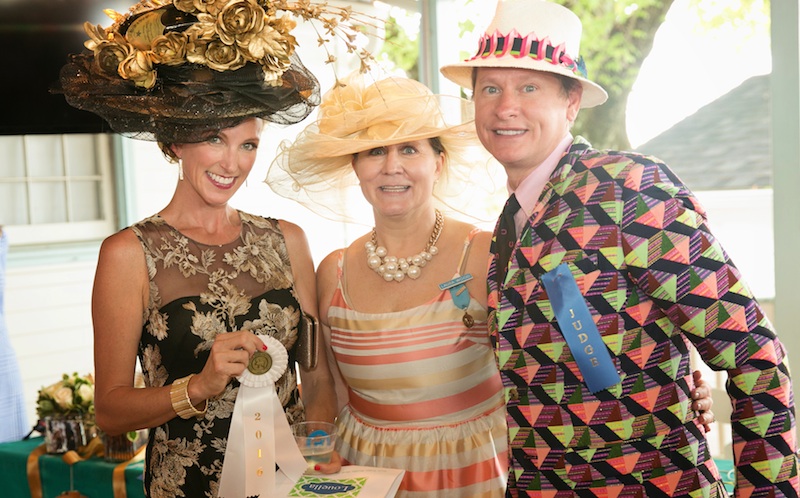 “Best Head to Toe” winner Amy Holzapfel collects her ribbon (yup, she did it again!) from contest chair Laura Wood and judge/emcee Carson Kressley. Besides looking simply smashing, Amy gets extra points for keeping a smile on her face while carrying a bottle of Dom Perignon on her head. (Brenda Carpenter photo) 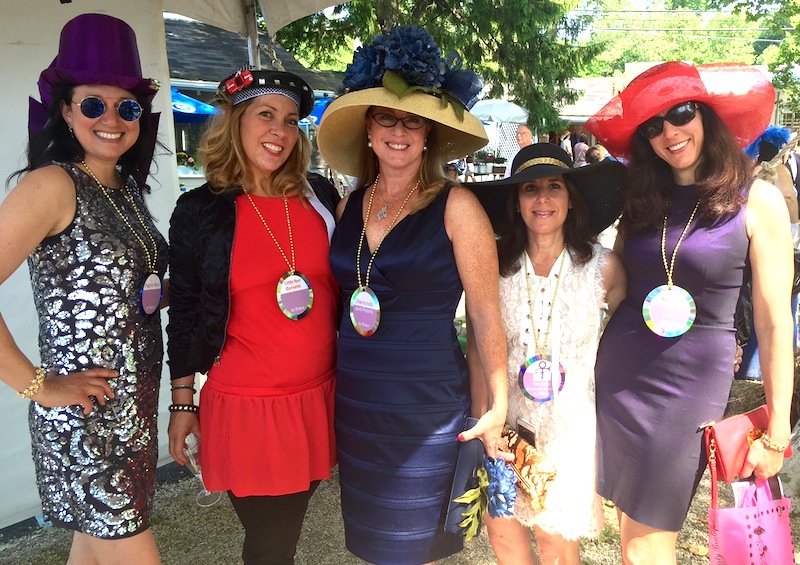 Still in mourning over Prince, each member of this group entry wore a different Prince album around her neck: Amy Mezrow, Heidi Tirjan, Heather Bendit, Suzin Levy and Jennifer Leach. 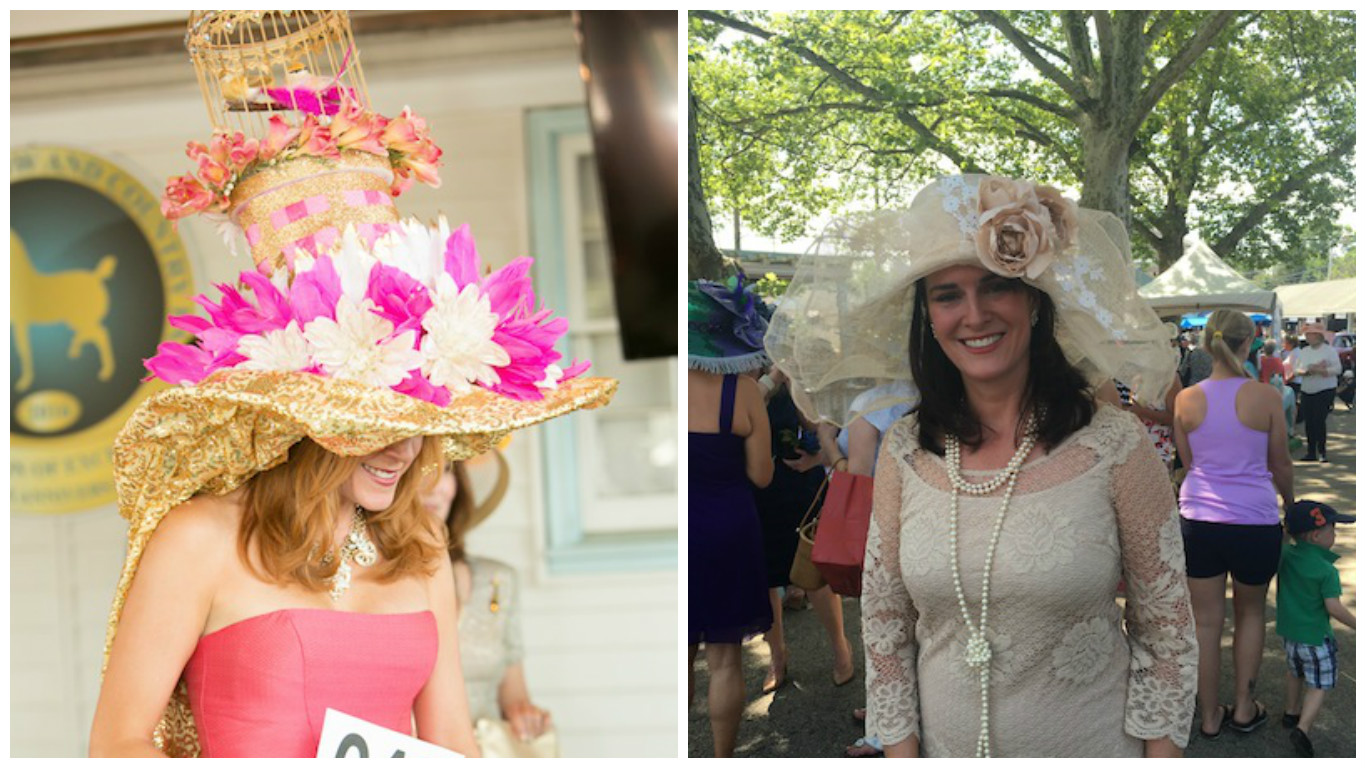 Ever the crafty one, Robin Sweet created another headache-inducing topper while Cynthia King-Webb kept it classy in ivory. 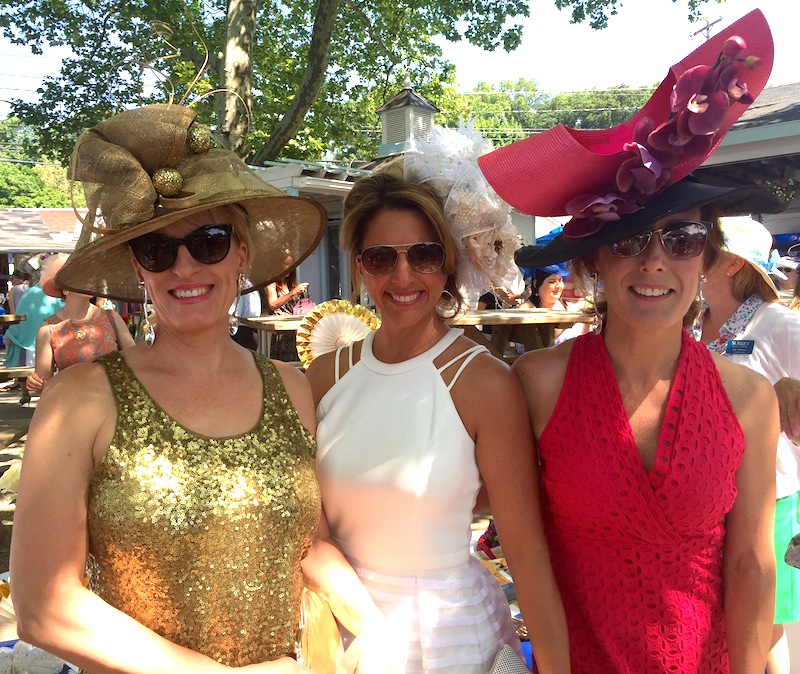 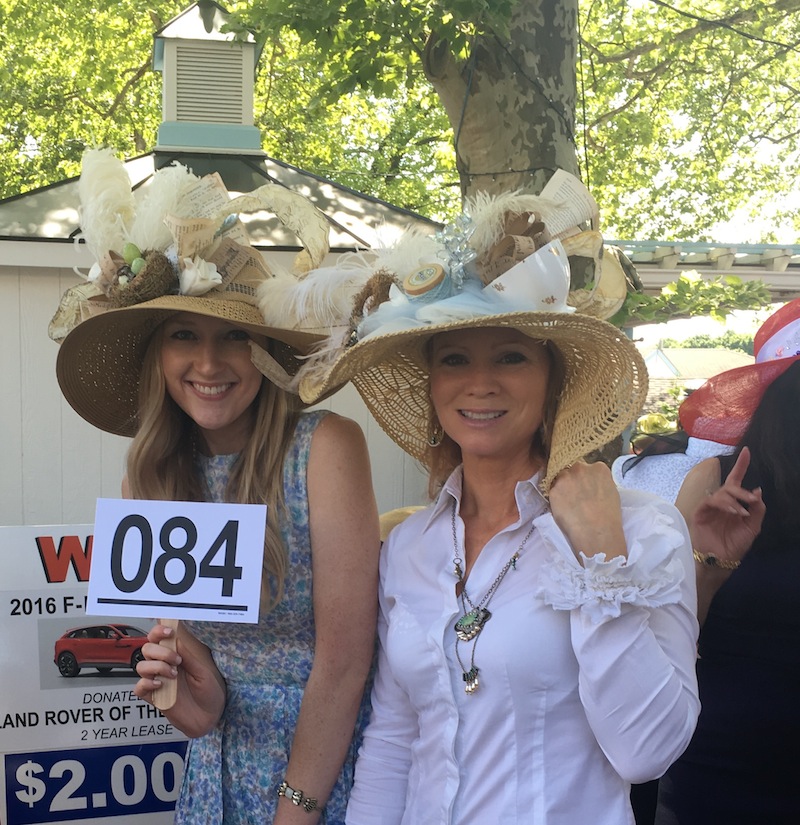 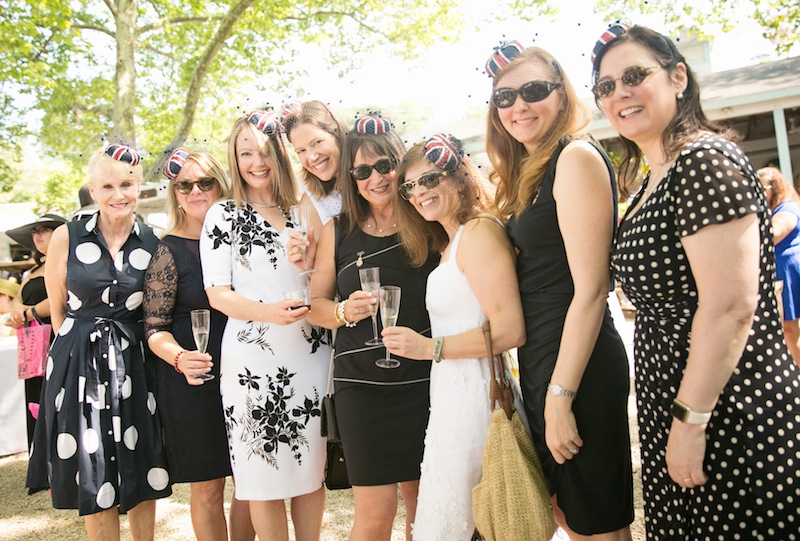 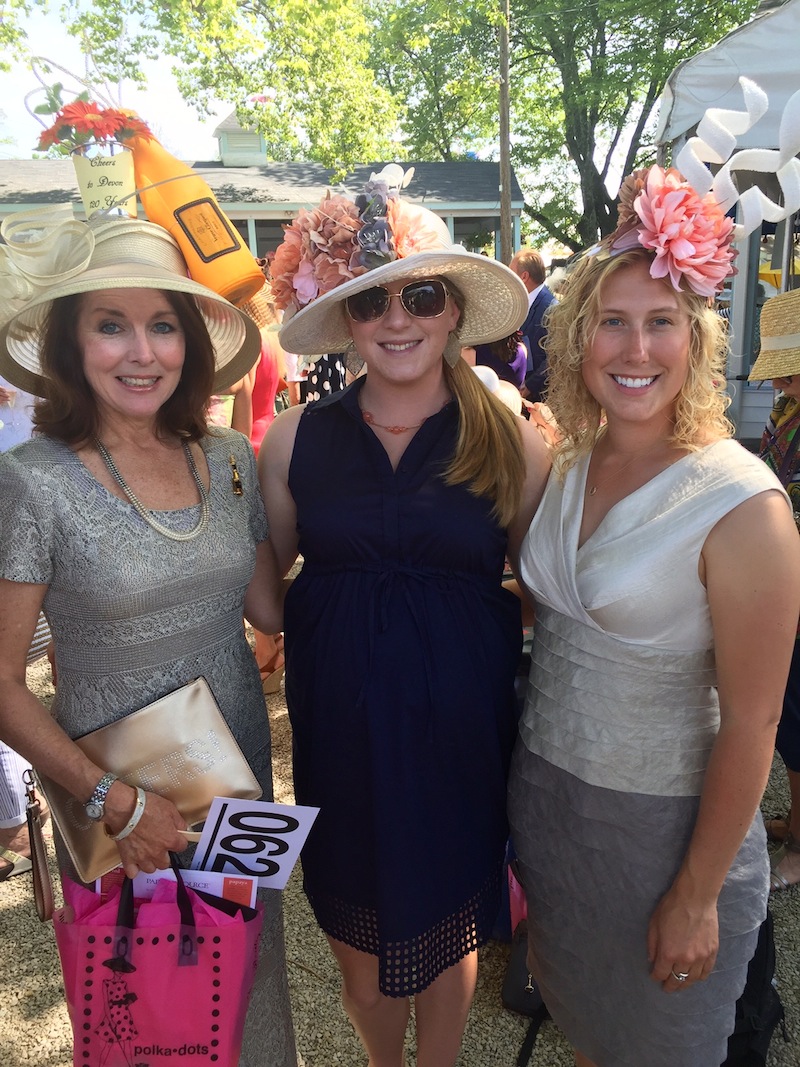 Patti Lynn Fitzgerald, Brooke Brewer and Nina Shaffer. A winner for her lemon-stick getup last year, Patti Lynn broke out the bubbly for her 2016 topper –Veuve Clicquot (if you zoom in). 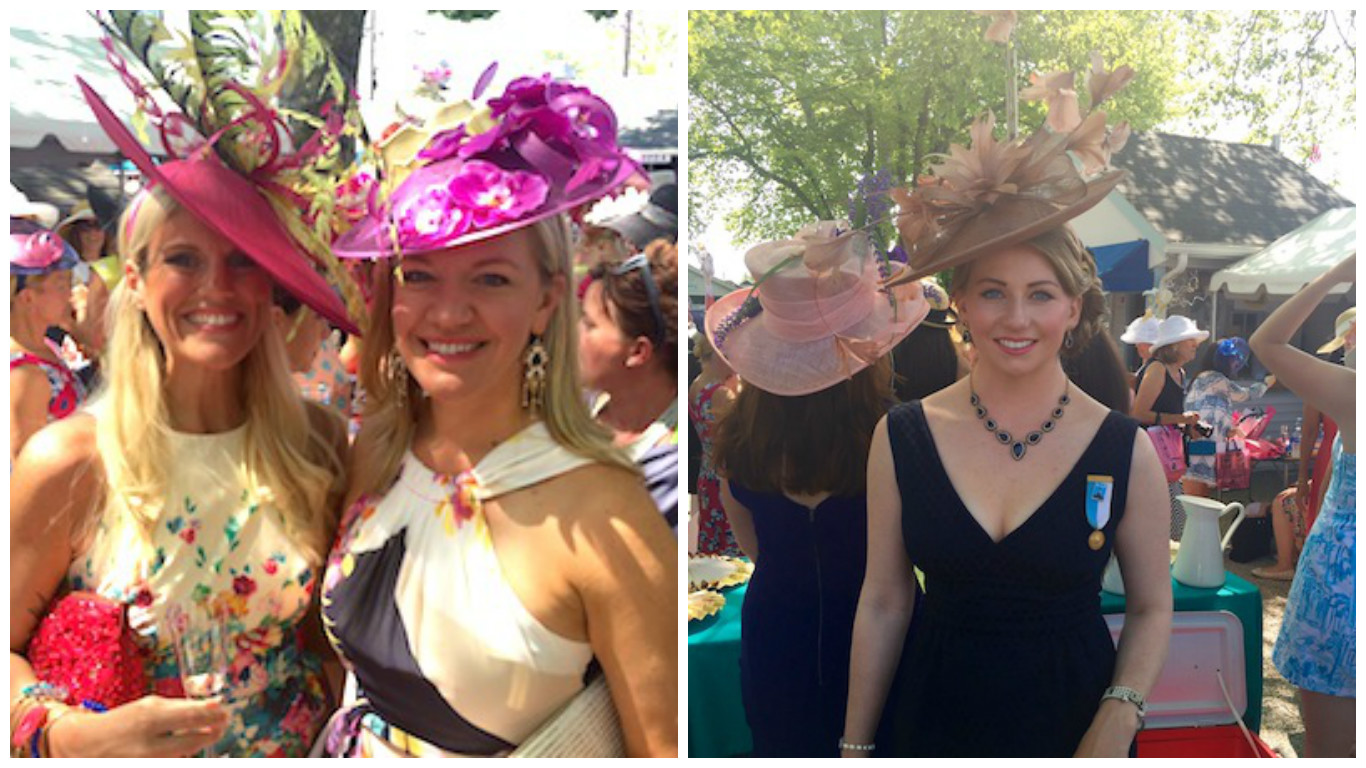 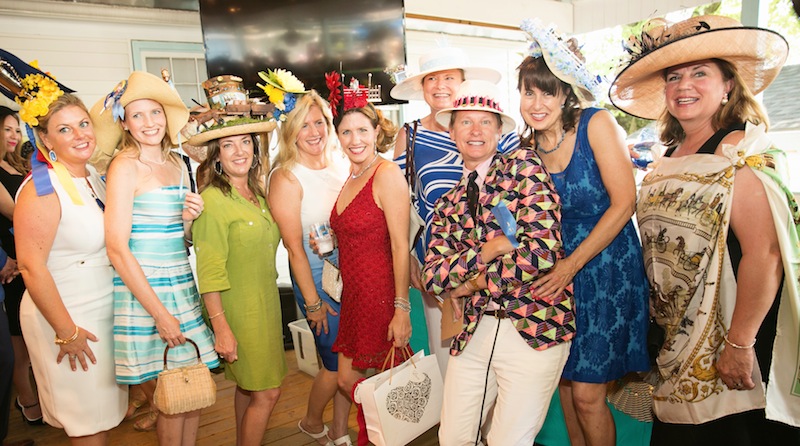 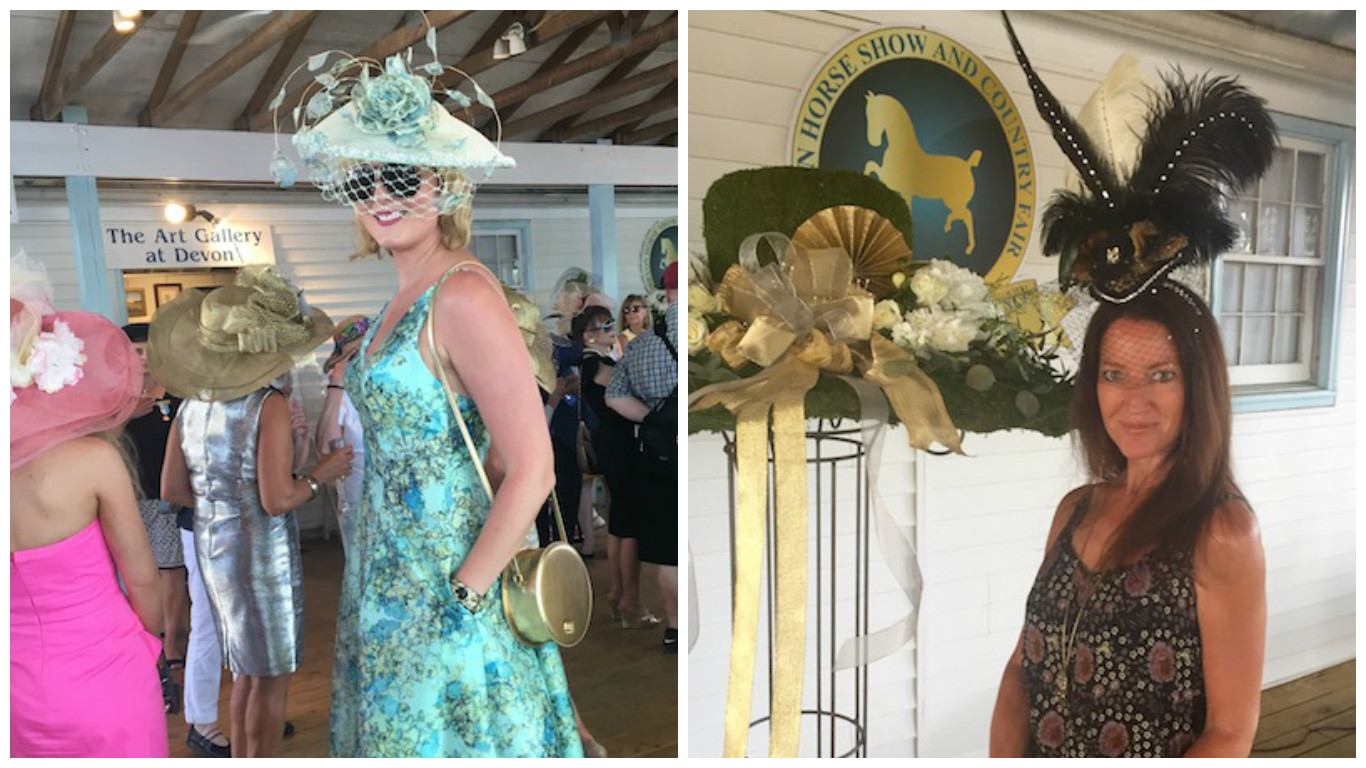 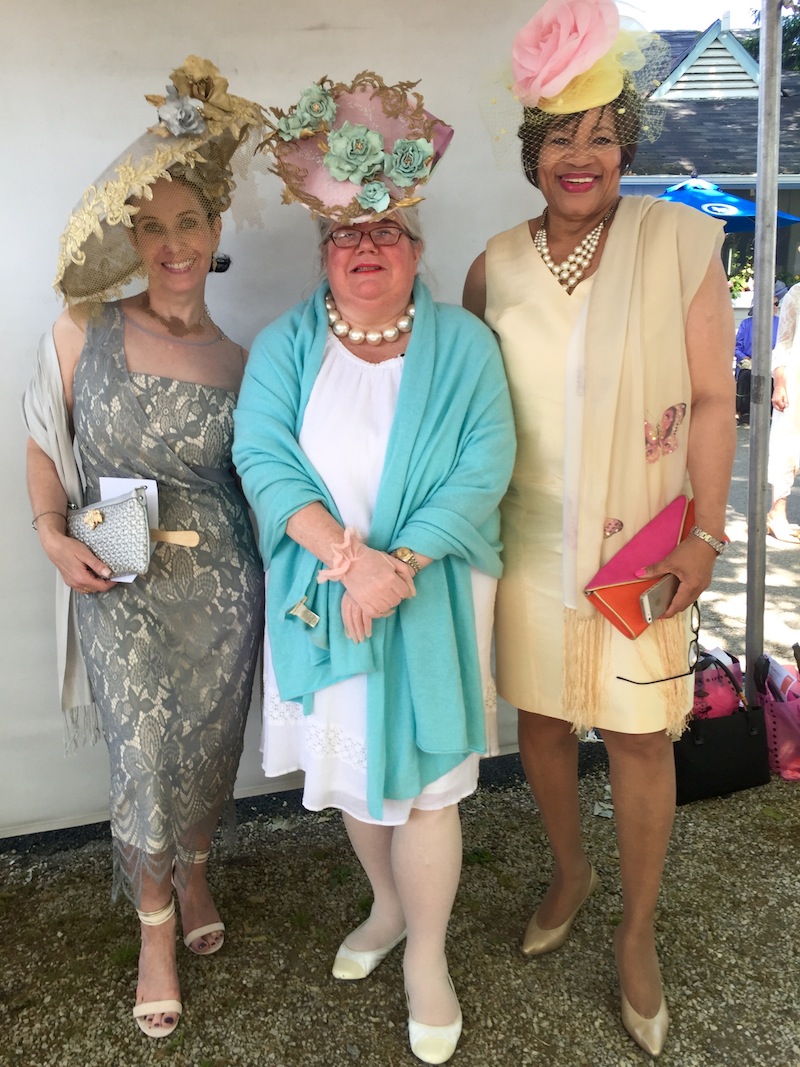 A trio in Tiffany Arey Millinery: Tiffany herself, “Most Fascinating” winner Michelle Leonard (a hat gal if there ever was one) and Pat Nogar. Pat’s fascinator features a 35-year-old rose once worn by her mother. 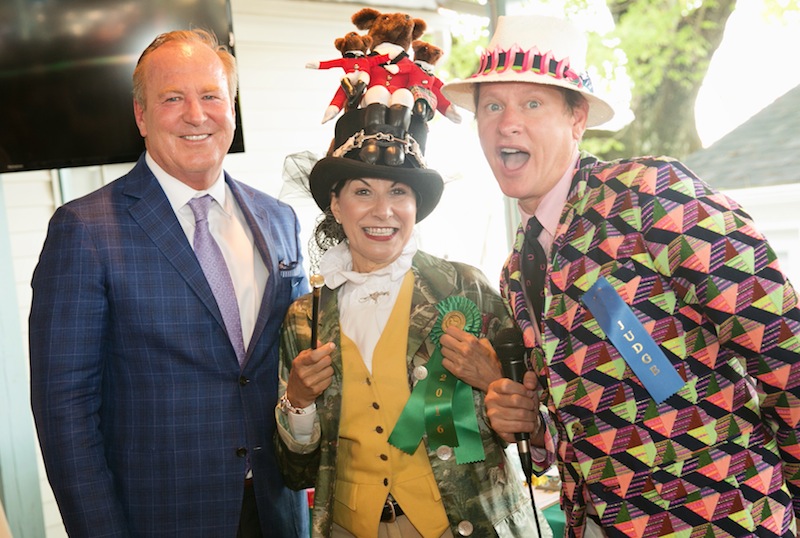 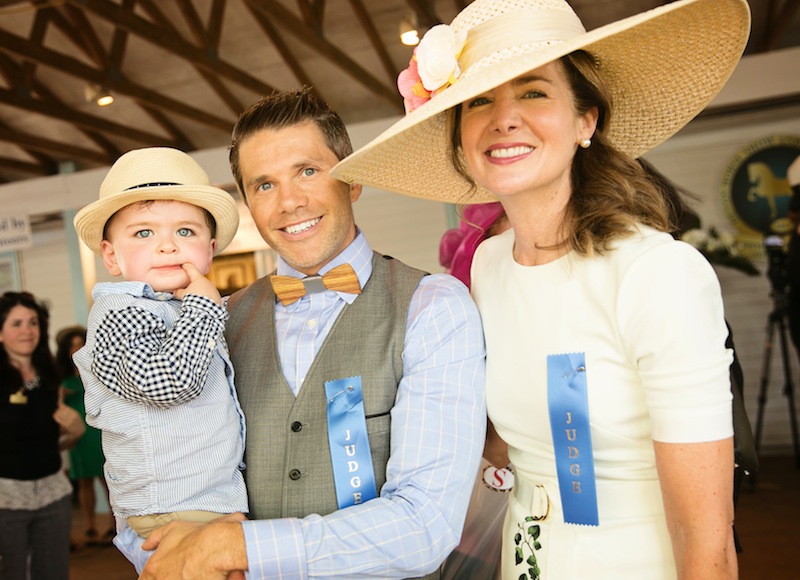 Two judges and a tyke: 6 ABC weather guy Adam Joseph, his son Jacob, and yours truly. 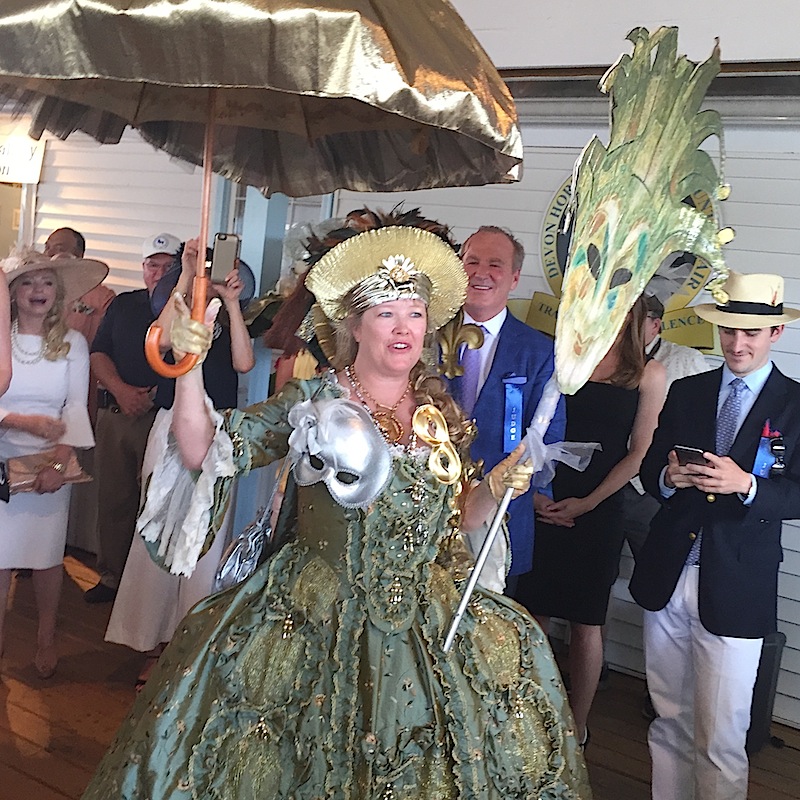 And finally, Pamela Bates, West Chester French teacher and twice-in-a-row Best in Show honoree for a custom-crafted “Robe de la Francais” gown with feathered headpiece and multiple props. Gotta hand it to her: not many gals would brave that costume in 80-degree heat.

The new SoulCycle in Ardmore is wheeling them in, fast and furious.

The indoor cycling company that counts Brooke, Britney and Reese among its frenetic fan base, opened in Suburban Square Friday – its first studio in our fair state. 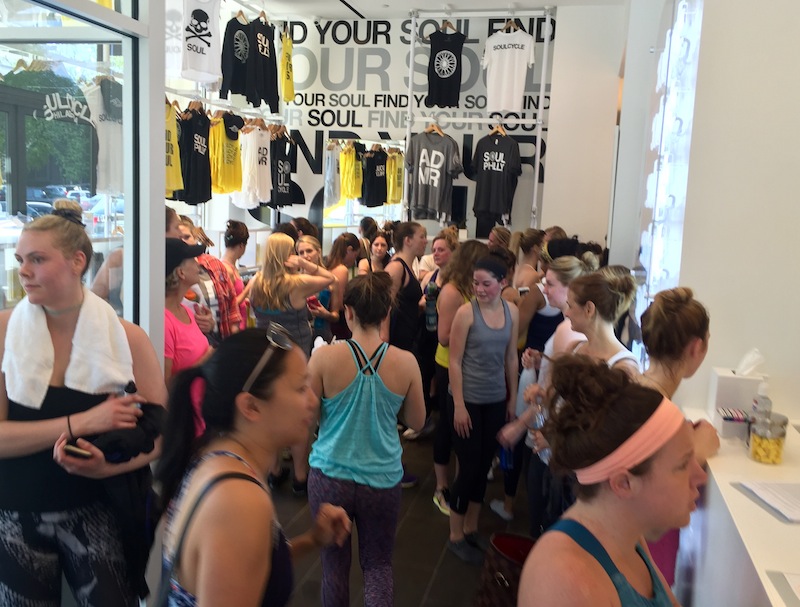 So naturally, the joint was jumping and the sweat was flying.

Along with the hype.

Just read the wallpaper: Take your journey! Find your soul! Addicted! Obsessed! High on sweat and the hum of the wheel! We inhale intention and exhale expectation… 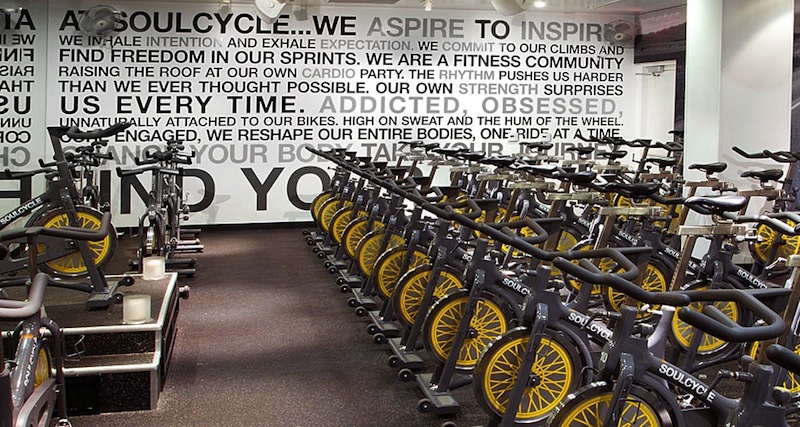 At the company’s invitation, we took SoulCycle for a spin opening morning.

We were not alone.

All 54 yellow-spoked bikes were booked for our 9:30 ride: 50 gals; 6 guys. Sadly, no celebs except for an Action News reporter.

The ride was a hoot and a holler, literally; the coaxed cheers and music were deafening at times.

And yup, it busted our butts.

Most riders were well under 40, begging the obvious question: How the hey could they afford the $30 class fee, not to mention all those SoulCycle tees and capris they were sporting?

Pricing alert: There are no first-time freebies here. Rookies pay $20, instead of $30. Bike shoes are included in ride fees for first-timers. After that, they’re $3. For those keeping track, FlyWheel, which includes towels and shoes, is a few bucks cheaper.

While FlyWheel, Orange Theory and other boutique studios are stat-driven, SoulCycle keeps it simple.

No monitors. No metrics. Just you, candlight and your smooth and sturdy bike equipped only with a resistance knob. Turn it right to make it harder, to the left to ease up.

The goal here isn’t competition; it’s community, moving as one.

You sway from left to right, pitch forward and back, even do handlebar push-ups – in unison.

Call it Synchronized Spinning. Or maybe Bike Dancing – with every turn of the wheel in time to the throbbing playlist.

Folks over 40 may crave earplugs but won’t need padded bike shorts. The only time you really sit is during the 3 – 5 minutes you lift puny hand weights.

Our instructor, the delightful Alexis Rose, certainly had smooth moves.

She also had a posse, a handful of front-row ringers who’ve taken her classes in NYC and Short Hills, NJ. (A studio sign directs those who want to “do their own thing” to kindly sit rearward.)

A former pro dancer, Alexis tells SAVVY that SoulCycle “discovered” her after they spotted her on an Insanity TV commercial.

Alexis exhorted us to “breathe in love, exhale compassion” and ended with a Namaste. Way to keep the soul in cycling, Alexis.

The 3,400-sq. ft. studio is pristine with nicely appointed showers, lockers and lots of lobby space to showcase all the swag that’s for sale.

The staff was as chipper as the yellow-and-white color scheme. 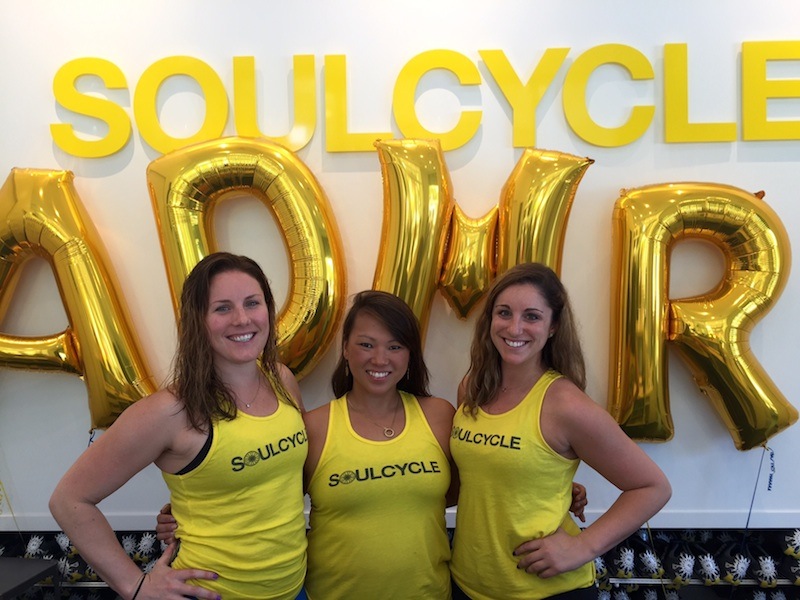 Only one real head scratcher: A woman from corporate operations stopped us from chatting up the instructor and other cyclists after the class. Only two people were designated for media interviews, she explained with a smile. Really? Can’t imagine what the worry was – everyone seemed to be enjoying the endorphin buzz at ride’s end. Sweaty and sated, they certainly were snatching up the swag. Guess that’s the SoulCycle way: control the spin – on the bike … and off.

While Devon Yard’s proposed four-story apartment building remains in limbo, a new building that’s twice as high just got the all clear in Ardmore.

The Save Ardmore Coalition (SAC) fought developer Carl Dranoff’s eight-story “One Ardmore Place” project all the way to the PA Supreme Court – but to no avail.

So it looks like One Ardmore Place – high-end shops, apartments and a parking garage funded by both Dranoff Properties and public dollars – will finally be built on the municipal parking lot on Cricket Ave.

Then again, maybe it won’t.

SAC hasn’t waived the white flag yet. The group says it will “continue to advocate” for the proper use of the $10.5 million in taxpayer funds intended for “transit-oriented redevelopment” that it claims Dranoff is “misappropriating.”

Meanwhile, it’s full steam ahead for Villanova’s new dorms on Lancaster Ave. across from the main entrance to campus. (For the record, many neighbors weren’t too keen on this project, either.)

Looks like 1,100 Nova coeds will be living large in the new four-story stone building. They’ll live in suites on floors two through four. And can mosey on down to the ground floor fitness center, bistro, convenience store, mail center and campus shop.

A rainwater harvesting system and a new park are also part of the project’s green plans. Say what you will about traffic and such, but this sure sounds prettier than that mammoth parking lot.

Anyone who doubts that heroin is hitting the Main Line hard should check out the annual awards just doled out by Tredyffrin Police. One third of the awards (4 out of 12) for outstanding police work involved heroin/opioid abuse – either saving lives with Narcan, stopping drugstore theft or arresting dealers. Ugh.

A Gateway shopper suffered what may be the Main Line’s first snatch and drag.

Police are looking for two white guys – late teens, early 20s – who pulled up next to a woman as she was walking in the Gateway parking lot near T.J. Maxx around 8 p.m. May 19.  They reached out and grabbed her purse, then sped away, dragging the woman by her purse “for a distance” and causing “multiple injuries” to her face, chest, arms and legs. 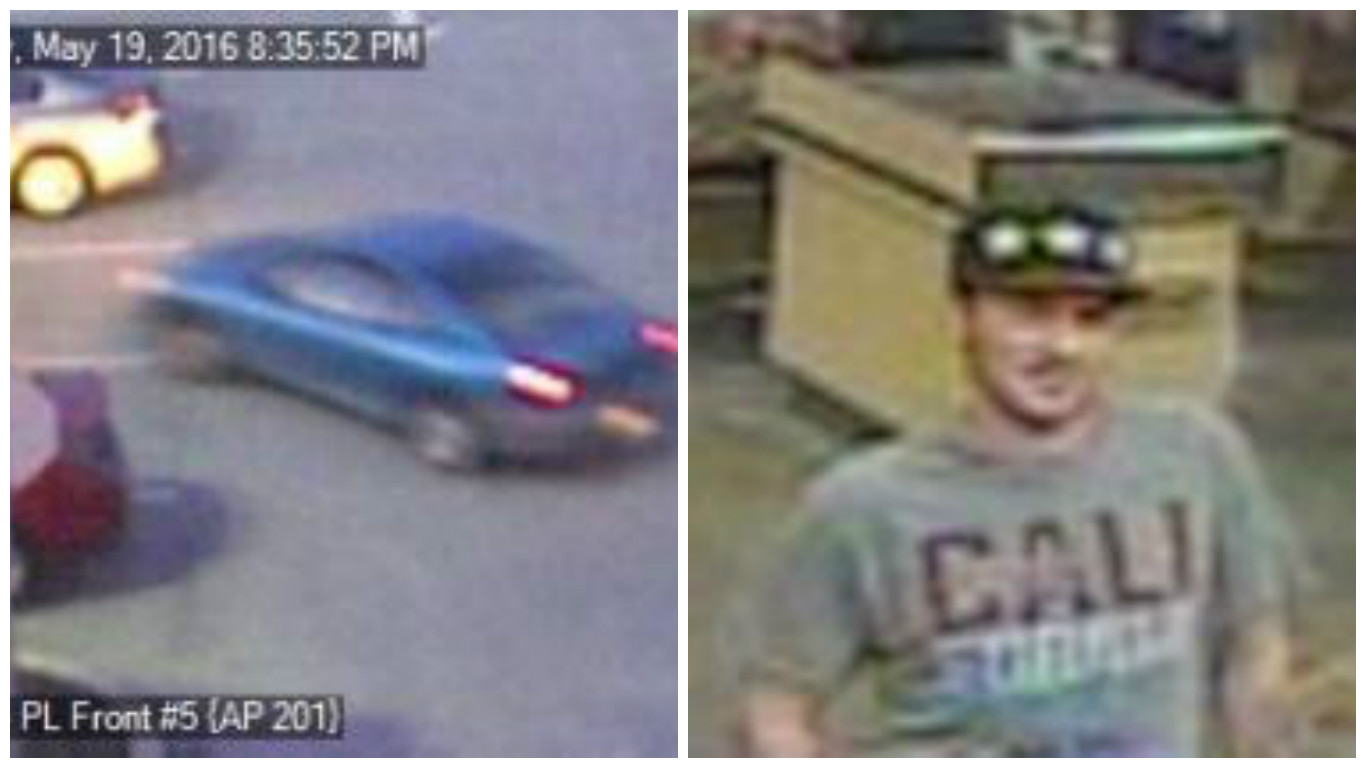 Security camera photos of the robbers’ car and one of the suspects at the Malvern Wegmans.

A half hour later one of the crooks tried to buy Crest White Strips (huh?) and razor blades at the Malvern Wegmans, then drove west to a Turkey Hill near Lancaster.

Where the trail went cold.

The robbers were driving an older, bright blue sedan with a gray rear bumper and a booming tailpipe. If anyone spots these clowns or their car, call 610-408-3649 or email [email protected]

Meanwhile, Lower Merion police are warning folks not to fall for a new phone scam: callers saying they’re from PECO or the IRS and demanding payment. Don’t give them your credit card number. Or the time of day, for that matter.

Get a kick out of books set in your own backyard? Then you might want to pick up a new beach read, “The One That Got Away,” set on the Main Line and Center City.

Frothy and fun, it chronicles a young woman’s life in an alternative universe. No, not on Mars, but here in Philly. It’s a look at how her life would have been if she’d married a gorgeous, rich and high-born politician instead of a lowly landscaper from Delco.

Thus exploring the age-old question: Do money and status really make a girl happy? Two guesses on the answer.

“The One That Got Away” is a debut novel by Havertown mom and former PR writer Leigh Himes and on the shelves now at Main Point Books in Bryn Mawr. 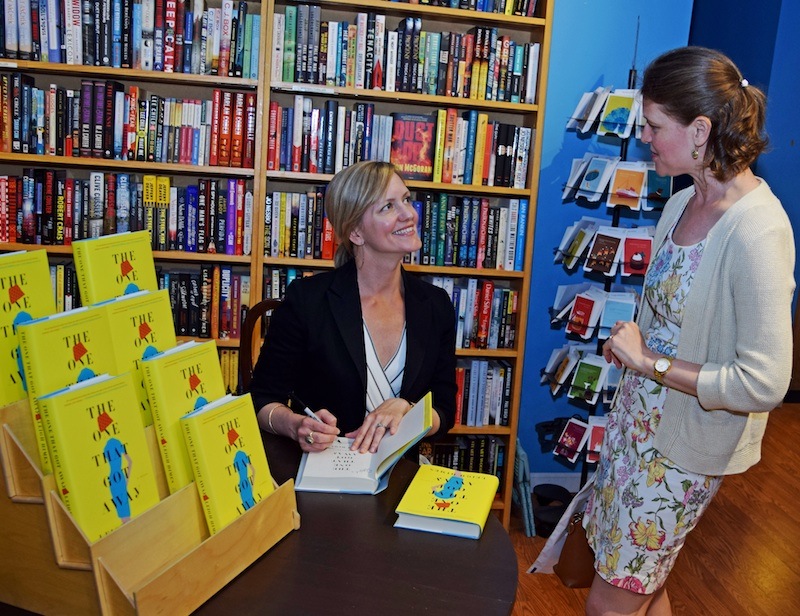 Fans of The New Tavern are crying in their beer – unless, of course, they keep kosher.

The Bala Cynwyd institution on Montgomery Ave. that’s anything but new (it dates back to 1933), has closed and will re-open as Citron and Rose Tavern & Market.

New owner is David Magerman, the guy behind the C & R (kosher) Steakhouse down the street in Merion Station. The re-tooled spot will serving all-kosher dishes for eat-in and takeout, including kosher takes on Tavern favorites.

Don’t be surprised if you see Tavern owner Nick Zarvallas still hanging around. He’s staying on as an advisor.

Rodgers and Hammerstein, Lerner and Loewe and, now Pasek and Paul.

After picking up a pack of awards (including two Obies and a Helen Hayes), the songwriting duo’s hit musical, Dear Evan Hansen, is headed to Broadway in the fall.

We tell you this because half of Pasek and Paul is Main Line-bred Benj Pasek, 30, a Friends Central alum who once sang in the Philadelphia Boys Choir. And you know we do cartwheels when a local boy hits it big.

Benj met his songwriting partner Justin Paul at the University of Michigan.

The two wanted to become actors and singers but detoured into songwriting – a wise move, apparently. Tony nominees for A Christmas Story: the Musical, the pair also wrote songs for Dogfight, James and the Giant Peach, and NBC’s Smash, among others. We’re hearing the cutting-edge Dear Evan Hansen will be a Broadway smash, too.

As much as we like sweating it out in the gym, you can’t beat an outdoor workout in summer.

That’s why we’re pumped for the new Yoga/Boot Camp “community” classes in Wilson Farm Park on Wednesday nights. They started last night and will go all summer long.

Hosted by Paoli’s Purenergy Studio, the 6 p.m. classes are pay-what-you-can, with proceeds going to the Malvern-based Fighting Back Scholarship Fund. The first half hour is high-intensity interval training; the next hour is yoga flow. Go for one or both. Register online or just show up.