Jaw-dropping, trippy and altogether original, Autograph Brasserie is like nothing the Main Line has ever seen.

And see it you must.

Not since the 2004 debut of Nectar’s big-boy Buddha has a suburban restaurant arrived with such flash and splash.

So sign up now, chowhounds; reservations are going fast.

Autograph is the latest head-turner from Main Line-bred restaurateur Marty Grims, the EA/Cornell grad behind White Dog Cafés in Wayne, Haverford and West Philly, and a pack of other places.

While the Dogs are playful romps with man’s best friend, Autograph is an homage to Man Himself.

Specifically, to the stars – men and women – who’ve shaped our closets, our iTunes libraries and, yes, our kitchens. 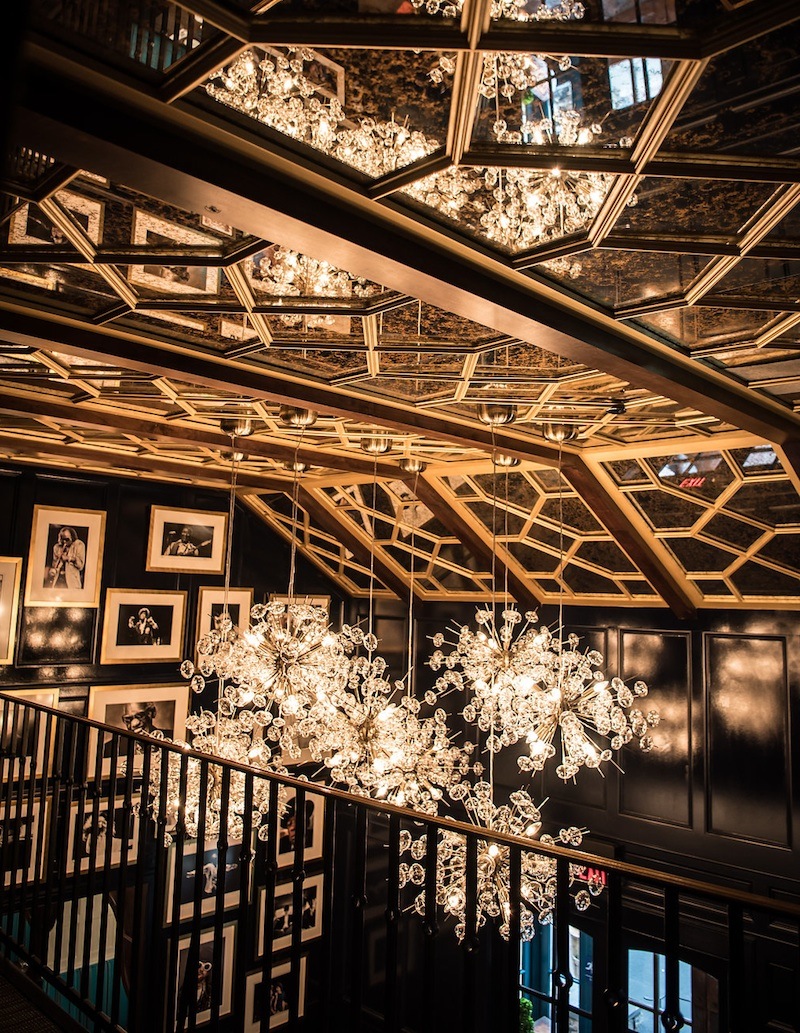 A view of the vestibule from the second floor. (Photo by Christie Green.)

We meet them first in an array of iconic photos bedecking the two-story foyer. (Who’s that way up top? we wonder. Oh yes. Wynton Marsalis. Of course. )

Just so we’re clear, Marty spells out his intentions above the hostess desk. 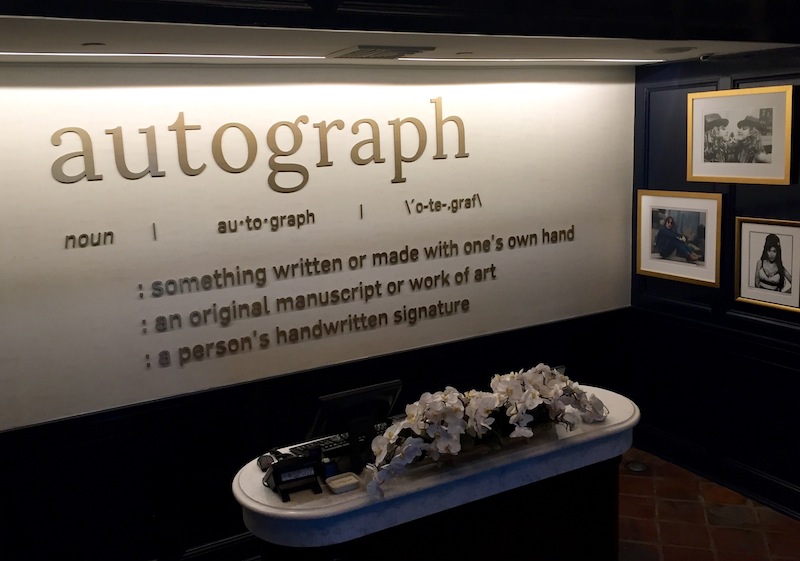 Autographs are hand-crafted, original creations. Some you collect, others you watch or listen to, some you taste.

All of them you celebrate.

The lobby’s adjoining “Lounge” is an ode to American music, its crescendo a show-stopping horn chandelier accompanied by extra horns suspended over a generous bar.

Another Lounge high note: the classic album covers, 550 strong, that line its walls, many sourced from local vinyl shops Shady Dog and Gold Million Records. The cardboards call to us reverie: we stop, we smile, maybe strum a little air guitar as we sip. 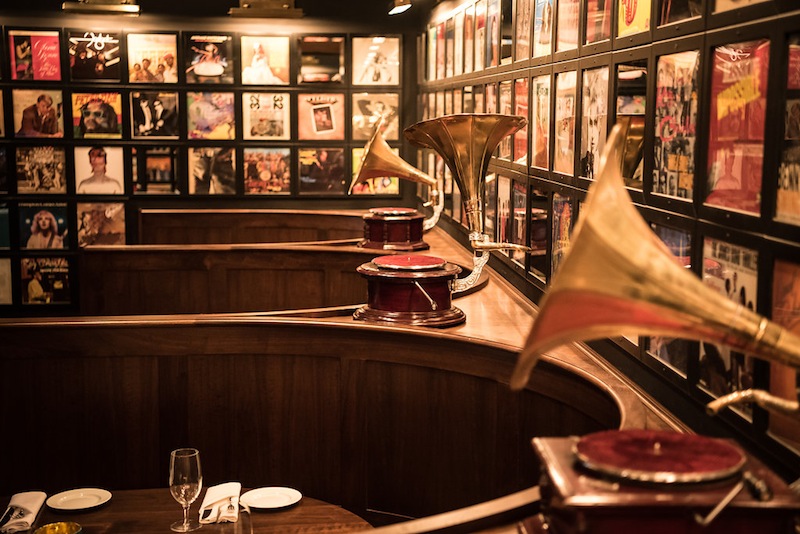 In the dark and macho Club Room, giant portraits of bad boys James Gandolfini and Keith Richards peer out over a swanky second bar, paisley banquettes and vast round tables. 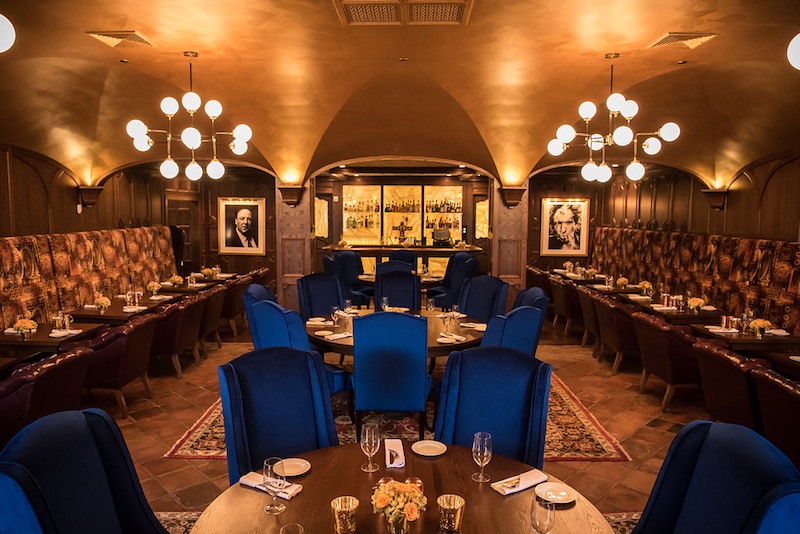 Opposite the Club, the sunny Sycamore Room (named for its faux central tree) beckons the softer sex. Photos of Twiggy, Natalie Wood and Audrey Hepburn, among other starlets, grace its walls. (Where do all the cool girls meet? At Sycamore, for sure.) 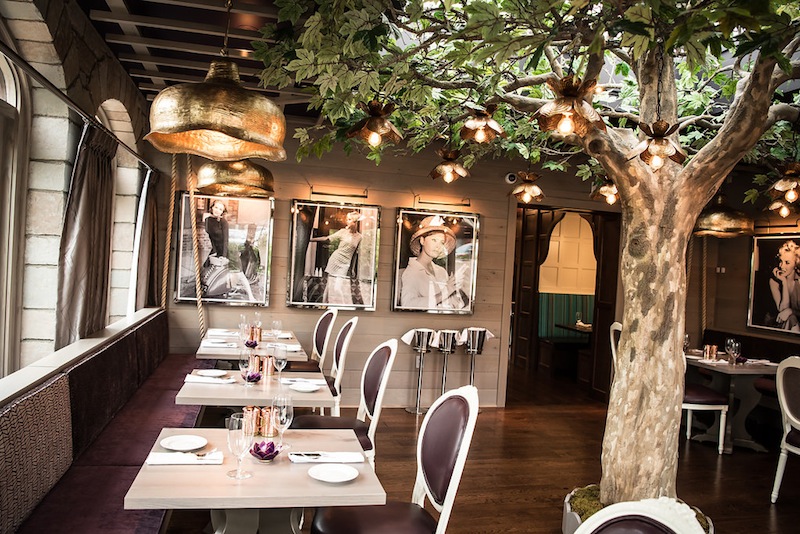 Built by David Semerjian and brought to life by Balongue Design, Marty’s vision is bold, ambitious and completely over the top.

But that’s the whole point.

“We want to transport you from the Main Line,” Marty tells SAVVY. “We’re upscale but not precious. We want you to feel every time you eat in a different room, you get a different experience.” (New York? Hollywood? An elaborate, upscale theme park?)

Paeans to American gastronomy, they include aged Midwest steaks, from a $32 Steak Frites filet to a $69, 18-oz. angus NY Strip.

Also on the menu: dishes with Italian, French and Spanish flair. (No sushi or Asian accents.)

Prices are in the White Dog range. Which is to say steepish but, hey, the Organic Four Egg Omelet and the Half Pound Prime Steak Burger go for $19 at dinner. Or mix and match small plates and salads, $12 to $15 each.

We can personally vouch for the Lump Crab, Apple, Avocado Toast ($15), one of five trendy toasts on the menu, and the Lemon Parsley Linguine with shrimp ($15).

Also killer: The gougere basket, in which warm, fluffy cheese puffs sub for bread. And the Annabella cocktail, an unlikely blend of The Botanist Gin, elderberry, lemon and grapefruit spiked with St. Germain and Cocchi Americano. (Trust us on this one.)

The Autograph concept has been swirling around in his head for decades, he says, dating back to his Central Bar and Grill days in Bryn Mawr.

It just took him a while to find the right spot.

A place with good bones, ample parking, and middle-of-the-Main Line access, a place in his own backyard where he could emblazon his boldest signature yet, his Autograph.

Looks like we missed a BIGGIE when we passed along those SAVVY Mother Day gift ideas last week.

While most of us were happiy brunching and lazing the day away, two Main Line moms – one 65, the other much younger – well, they asked for something a tad more exciting.

While we loafed, they went skydiving – the safe, indoor way at the new iFly in King of Prussia. (They’ve got families, after all.) 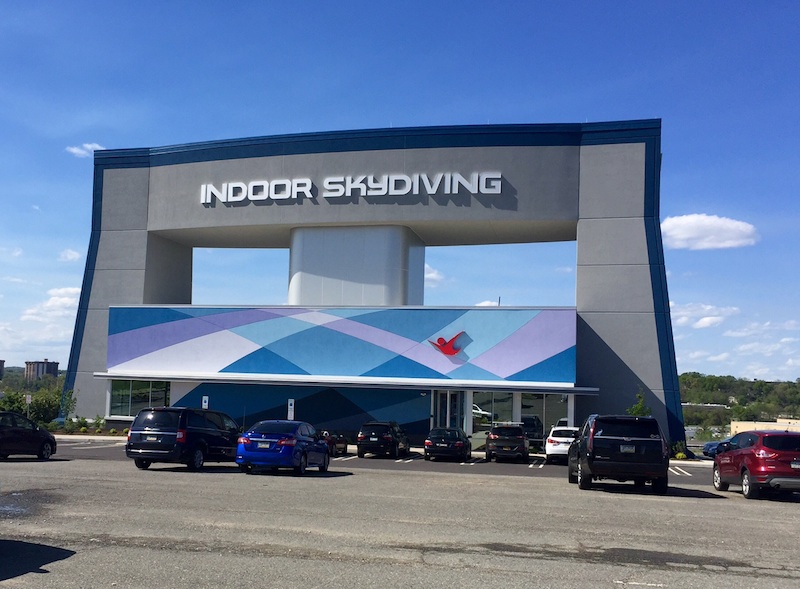 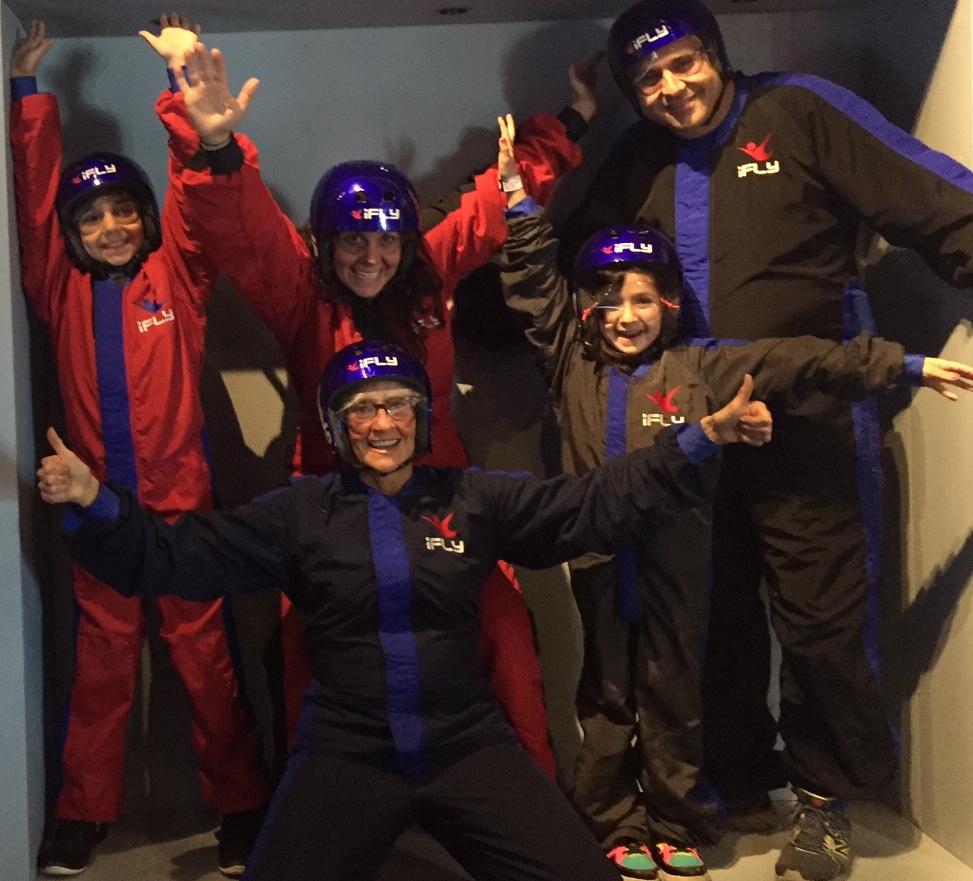 Going for it with gusto is nothing new for Lani, 65, whose previous exploits include milking a yak in Mongolia, chewing curdled blood on a stick in Taiwan, and chatting up residents of Mumbai’s Dharavi slums before Slumdog Millionaire made them famous.

“The older we get, the more we have to try new adventures and grow,” Lani tells SAVVY. Husband Brian, the day’s designated photographer, called his wife’s Mother’s Day gift request “her usual crazy.”

The Hartsteins are gamers, too. They’ve gone cliff diving, zip-lining and swimming with sharks. Alison surfed on her 40th birthday. Skydiving – at least the indoor version – has long been on the list.

After a 15-minute lesson, their group suited up to take two, one-minute turns inside the vertical wind tunnel. Ably assisting each was veteran iFly instructor Nick. An outdoor skydiver, he treated us – flyers and bystanders alike – to a thrill show after the last rookie sat down. Oh, so that’s how it’s done! 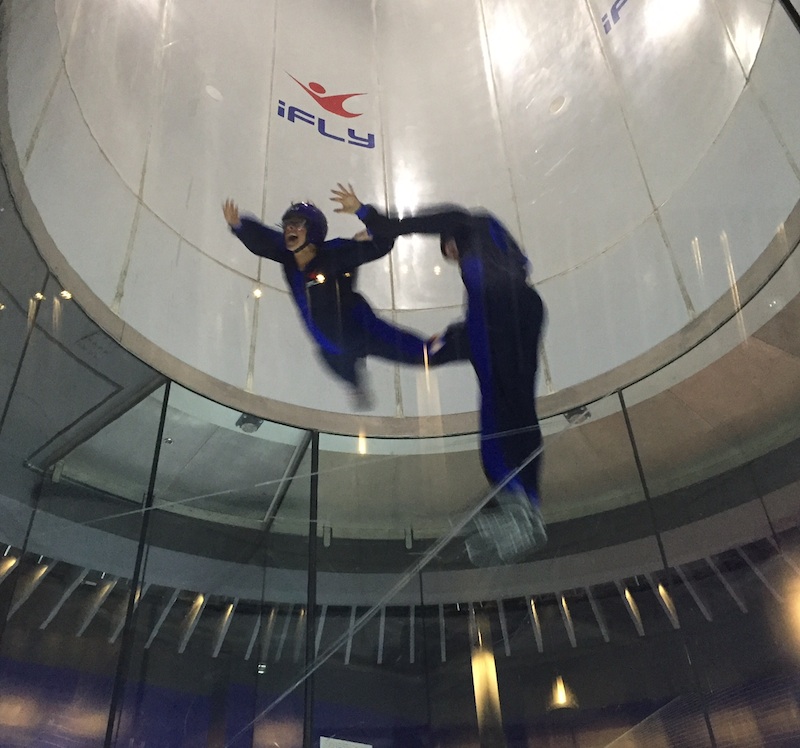 While the Hartsteins had fun, they’re probably once and done – they got a little dizzy and nauseous.

Lani, on the other hand, emerged exhilarated. She’s already signed up for seconds.

Open less than a month, iFly appears to have a hit on its hands. (It reportedly cost $15 – $20 million to build so business had better boom.)

The King of Prussia location is the company’s 50th. Another iFly will open in Mt. Laurel next year.

Another week, another delay on Devon Yard.

Easttown supervisors were set to vote on the project at a public meeting last Thursday night but developer Eli Kahn asked for a postponement. (He sent the township a letter the day before.)

His plan – to lease most of the old Waterloo Gardens block to Urban Outfitters so they can build a Terrain, Anthropologie, two Vetri restaurants and a parking garage, and to build his own four-story apartment/retail building across the street – remains in limbo. Still.

Don’t leave your checkbook lying around.

But it seems Willson found a stack of blank checks in a Heartwood closet and started paying himself – in Maseratis, Tiffany and Cartier jewels, a Porsche, a Land Rover and tropical vacations – instead. (Painter paints the town red, as it were.)

Willson has admitted that he forged Esther Gansky’s signature on 28 checks totaling more than $927,000 and deposited them in his own accounts over a year-and-a-half. He’s out on bail and so far has paid back $500,000.

A SAVVY shoutout to attorney Marsha Levick, who picked up the 2016 Philadelphia Award at the Barnes Foundation Thursday night.

Lock ‘em up and throw away the key? Not if Levick can help it.

The Bala Cynwyd resident helped win a second chance for nearly 500 juveniles sentenced to life in jail without parole in PA.  As director of the Philly-based Juvenile Law Center, she’s been fighting to ease punishments for young people who, science shows, aren’t as culpable as adults. That fight culminated in victory at the U.S. Supreme Court in January.

A second shoutout to Penn Valley’s Bobby Rydell, now clean and sober after two decades of hard drinking.. The South Philly-bred crooner fessed up to the toll alcoholism took on his singing career and health in his new autobiography, Bobby Rydell: Teen Idol on the Rocks.: A Tale of Second Chances.

The singer’s preferred poison: double shots of Ketel One on the rocks, knocked back four at a time. Rough stuff.

Glad to have you back, Bobby.

The Devon dweller gets an out-of-the-blue call from Jerry Seinfeld’s office April 29 asking if they could borrow his Triumph TR3B for an episode of “Comedians in Cars Getting Coffee.” (They saw the car advertised for sale.)

Over the moon because he’s a serious Seinfeld fan, Steven spends 40 hours spiffing up his 54-year-old green goddess. It’s then whisked it away on a flatbed to NYC to meet Jerry and John Oliver, his sidekick for the episode. 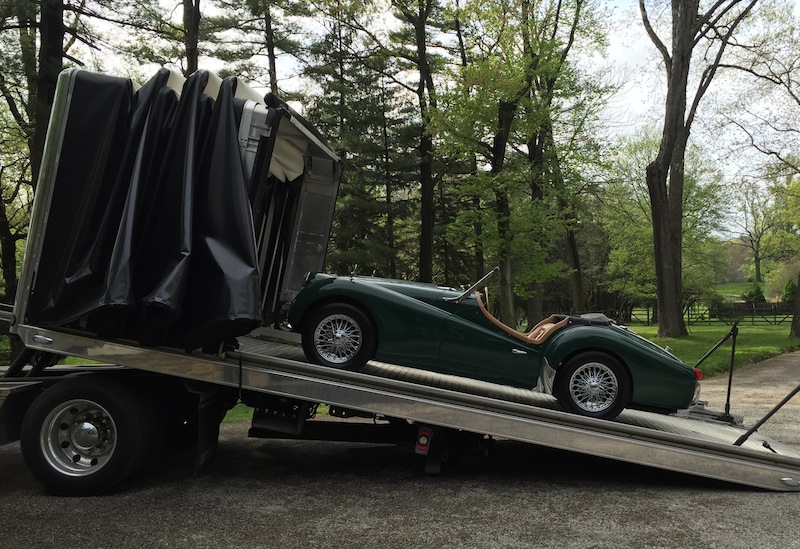 Mother Nature wasn’t quite so tickled, it seems.

The car gets to the Big Apple but rain is forecast. So Seinfeld’s people call Steven, asking for the car’s soft top and side curtains.

No can do. “It’s a summer car so I never fitted the top,” Steven tells SAVVY.

So Jerry’s peeps go and get themselves another TR3. Meanwhile, Steven’s rejected little roadster comes home to Devon, its star turn denied.

“The May rains drenched the little Triumph’s 15 minutes of fame,” he says.

You got that exactly right, Steven. “Comedians in Cars” episodes run 15 minutes.

And finally, after all the ickiness Conestoga High School’s 503 seniors endured this year, we’re pleased to see the class of 2016 celebrate itself – and its many talents – in this super fun “lip dub” video.

Watch it and smile.

Even the band Smash Mouth, the band that recorded “All Star” in 1999, got into the act (via Twitter).