Wayne is getting its first whisky bar and pub. The Goat’s Beard, a hit since it opened in Manayunk a few years back, will open in the old Xilantro space on N. Wayne Ave. in May. 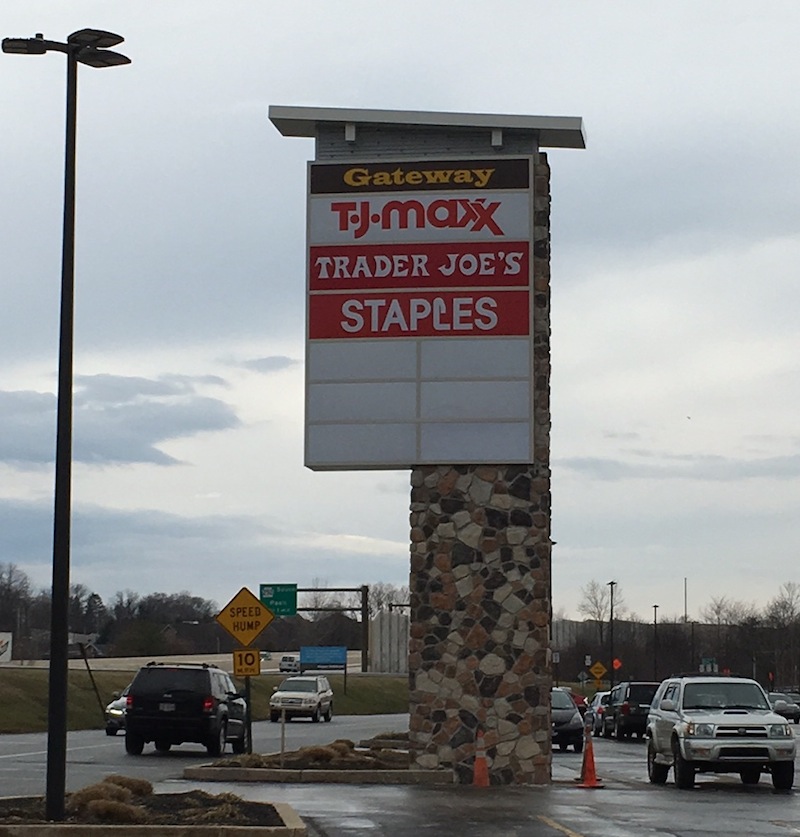 After its Big Fall Makeover, the popular strip mall near Valley Forge is trapped in the sixties no more.

Now that we’ve had time to take in the New and Improved You, we (mostly) like what we see.

We’re getting used to dodging the drops as we stroll between your de-canopied stores.

We’re warming up to your towering new sign, now that it’s been spiffed up with stone.

We’re even prepared to grin and bear the upcoming repaving of your crowded lot. (The price of beauty. And yes, those new benches will be nice.)

No, what has (some of) us feeling a wee bit sad and a touch confused is the end of little, locally-owned Mesa Fresh Mexican Grill.

After a 15-year run and a tearful Sunday night swan song, Mesa is no more – against its will, apparently.

It will be replaced “within the year” by Chipotle, according to David Sherin, leasing agent for Gateway Landlord Regency Centers.

So the Main Line area gets its fourth Chipotle (after Ardmore, Wayne and two in King of Prussia).

And Mesa gets the boot.

Patrons are railing against the TexMex switcheroo on Facebook, claiming the center is deliberately chasing the higher rents of national chains at the expense of mom-and-pops.

A native Texan who can walk to Gateway from his Wayne home and whose wife owns the Berwyn boutique, Jennifer on the Avenue, West says he “feels like” he and biz partner Bob Aitken were “strong-armed out.”

“They didn’t appreciate that we had been here for 15 years, that we were engaged with the community,” West tells SAVVY. “They just seemed to want Chipotle’s big bucks, although they didn’t say that.”

Mesa was a “small, family business” that “we put our blood, sweat and tears into … Couples got engaged here. We saw kids grow up and go to high school here.”

The owners were exceptionally community-minded but never touted it, West says. Mesa Fresh Lacrosse Club has sponsored a number of elite lacrosse teams and has sent well over 70 players to D-1 schools, West says. (Partner Aitken is a U.S. Lacrosse Hall of Famer.)

Mesa’s original lease with Gateway’s former owners was for 15 years with a half-typed, half-handwritten five-year extension agreement, according to West. But Regency didn’t have the extension “on record,” West says, and verification was a no-go because his former landlord has dementia and lives in Florida.

West says Regency offered Mesa a lease renewal but the rent hike and other terms were “not favorable.” He says Regency told him that if Mesa didn’t sign, “they had a deal in place with Chipotle.”

Sherin won’t comment on his dealings with Mesa, although he did allow that its next-door neighbor, Maxima, was a “good tenant.” (The salon’s owner, Silvia MacWilliams tells SAVVY she just re-upped for another five years and will miss the food and staff at Mesa. Her rent is “high” but in line with comparable properties, she said. A Gateway fixture, Maxima opened back in 1969.)

Meanwhile, West and his Mesa concept won’t be riding off into the sunset. He’s hired a culinary consultant and is scouting nearby locations. He’s also hoping to continue catering and renting out Mesa’s popular gourmet taco stand for parties.

“We’re very thankful for the support we’ve received over the years,” says West. “Like the Phoenix, we will rise again.”

A double SAVVY shoutout to Main Line CYO Basketball coaches Ed Morris (St. Norbert, Paoli) and Tom Monahan (St. Katharine of Siena, Wayne) for teaching their kids SO much more than Xs and Os. Read all about it here. Then sit back and smile.

Proof that nice guys finish first: Two of Morris’ three teams this year –  High School Girls and High School Boys – both just won the Region. Better yet, his Girls are City Champs (tops in the whole Philly Archdiocese) for the first time in Norbert’s 58-year history! A veteran coach and then some, Ed has helmed 60 CYO teams in 20 years. Yeah, you read that right: 60 teams.

Marvel, too, at Ed’s post-game Facebook post: “All 16 girls played in the City Championship Game. All 16. Nobody is a starter and nobody is a sub. They are just Teammates.”

Milliners are already atwitter over this year’s tailgating theme: Picnic with the President. Here at SAVVY, our picnic baskets runneth over with the possibilities. Our personal fave: Orange comb-overs, scruffy white wigs and blonde helmets playing tug of war with White House china.

BTW, all that horsin’ around’s not for nuthin, folks. The Races’ proceeds (mostly from about a zillion corporate sponsors and tents) benefit the Brandywine Conservancy’s open space and clean water programs.

Still no date for Public Hearing Part Two on the five-floor apartment building proposed for Devon Yard, the redo of the Waterloo Gardens. The Feb. 18 rematch was called off because at least one Easttown Township Supervisor couldn’t make the meeting.

Ball’s in your court, Temple and Penn. Hats off to small but mighty Haverford College for joining the chorus of colleges rescinding degrees to Bill Cosby. Huxtable the Horrible has already admitted he bought drugs for the express purpose of seducing women. Whatcha waiting for, Owls and Quakers?

Saks Off 5th is headed to the Plymouth Meeting Metroplex.  It’s a twofer, really: discounted designer duds AND much closer than the Off 5th at the outlets. Saks. Cheap. Sweet.

King of Prussia Mall just announced two new tenants for its mammoth connector: Jimmy Choo and Diane Von Furstenberg. Both will be their brand’s first and only PA locations. The connector, aka the mall’s new high-rent district, opens in August.

With all the kudos it’s collecting, we hope Ardmore’s Tired Hands Fermentaria won’t be too tuckered out to step to the podium to accept its Oscar – OK, it’s a James Beard Foundation Award – if its name is called May 2. The trolley-repair-shop-turned-workshop-chic pub is an “Outstanding Bar Program” semifinalist for brewing with out-there stuff like lemon purée, spearmint and sassafras root.

Fermentaria is one of just 20 James Beard semifinalists nationwide. Only other local bar program nod went to The Olde Bar, the retro-cool watering hole at the Old Original Bookbinder’s.

Sibs Brent and Blake Sonnek-Schmelz bought the chain’s “intellectual property” (logo, website, customer data) for a cool $400,000 at a bankruptcy auction in December. The bros say they’ll only put City Sports in urban areas, thus sticking by the name. Rolls off the tongue easier than Sonnek-Schmelzes Sports, right?

A second SAVVY shoutout to Pat McClennan, longtime Exec. Director of Chester County’s Home of the Sparrow, retiring in December after 17 years. “It wasn’t an easy decision,” Pat tells SAVVY.  As a board member then head honcho, Pat had a hand in all things Sparrow, including its popular fall fashion show and June Jazz events. (“I feel like I’ve been planning two weddings a year,” she jokes.)

While “it was an honor assisting women and children in need of our help,” Pat says she’s looking forward to part-time consulting work, travel and “crossing off some things on my bucket list.” Happy trails, Pat!

His Oscar acceptance speech was no joke, either. He told America to stop voting for candidates “who take money from big banks, oil or weirdo billionaires. Stop!” (Hey, Koch Bros., we’re guessing he’s talking about you…)

Proud uncle and aunt, RC and Barbara Gilbert, at the red carpet premier of “The Big Short.”

Fun Fact: McKay’s wife, Shira Piven, is an accomplished actor/director/acting coach and the big sis of Jeremy Piven of “Entourage.”

Looking for late winter thrills and chills? The East Coast’s top ice skaters will face off in Ardmore this weekend (Mar. 4-6) at the Eastern Adult Sectionals. Top four finishers in each event at the Phila. Skating Club and Humane Society will qualify for the U.S. Figure Skating Championships in April.
Point of local pride: Olympic skaters Dick Button and Scott Hamilton both trained at PSC&HS, the nation’s oldest figure skating club on Holland Ave. Tickets at the door. Click here for more info.