Bernardon Architects’ rendering of the proposed retail/apartment building to be built a block from the Devon Horse Show.

So what’s the hold up?

Postponing our grazing pleasure is the project’s residential side – specifically, a proposed five-story mixed-use building that’s giving some folks fits. (Too tall! Too dense! Too out of character!) 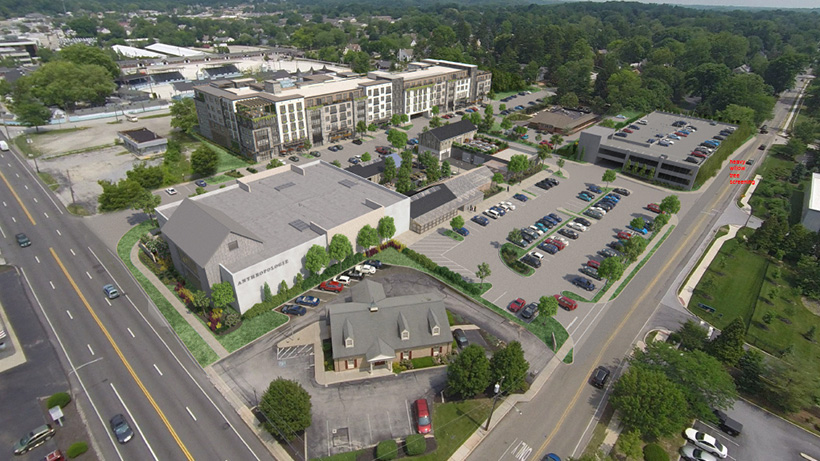 A depiction of Devon Yard on the developer’s website shows the proposed 5-story retail/apartment building with the Devon Horse Show beyond it. Route 30 is at left; Waterloo Rd. runs right.

Note to Easttown Supervisors: Come caffeinated and clear your next-morning calendars. The public meeting you called for Feb. 3 will run long and late. Impassioned partisans on both sides of Eli Kahn’s Waterloo Do-Over – and the zoning change it requires – are sharpening their stump speeches.

At issue are the apartments that Kahn, the site’s owner/developer, says are necessary for his walkable “downtown Devon” project to move forward.

If he can’t house empty nesters and yo-pros and put shops below them, his leasing deal with Urban Outfitters ain’t happening, folks, Kahn tells SAVVY.

Indeed, Devon Yard has been a mixed-use plan from the get-go. “I need the residential to support the quality of product I’m bringing in … The Urban deal relies heavily on the apartment development.”

You may recall that Urban Outfitters (URBN) was so distressed about online competition that it recently bought the Vetri restaurant group, banking on all those good smells enticing shoppers to its stores. So the notion that Urban might insist on a captive pedestrian audience for the Waterloo deal shouldn’t raise eyebrows.

Kahn’s initial plan for built-in foot traffic was a 92-room hotel (part of which, incidentally, was five stories). But he scrapped the Devon Inn when he “couldn’t structure a deal to close Devon Blvd,” among other reasons. Turns out making a public road private is a little complicated.

Kahn now wants to erect a 60-foot-high building with below-grade parking for 240, eight to 12 street-level shops and 125 luxury apartments on floors 2 through 5. To appease those miffed at the building’s monolithic front, Kahn has amended his blueprints, setting back the fifth floor and adding penthouse decks. 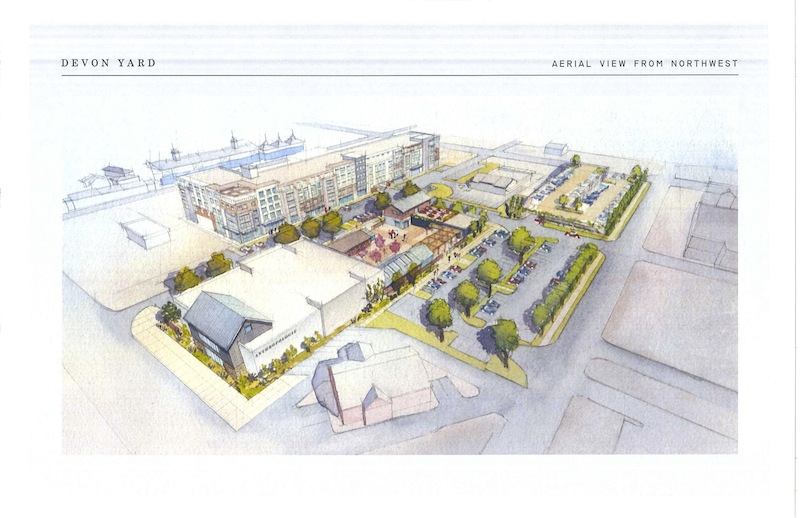 The apartments come with 9- and 10-ft. ceilings, on-site concierge, fitness center, community gathering space and, for the deepest pockets, rooftop decks. “The most luxurious rentals ever built on the Main Line,” the place “will be run with a staff of people” and will “look like a SoHo boutique hotel” with “Center City condo-like finishes,” Kahn tells me, with a touch of heat/pride/frustration in his tone.

He projects rents at $2,500 to $5,000, the high end for ultra la-di-da penthouse units Clearly, we’re not talking about another Home Props here. 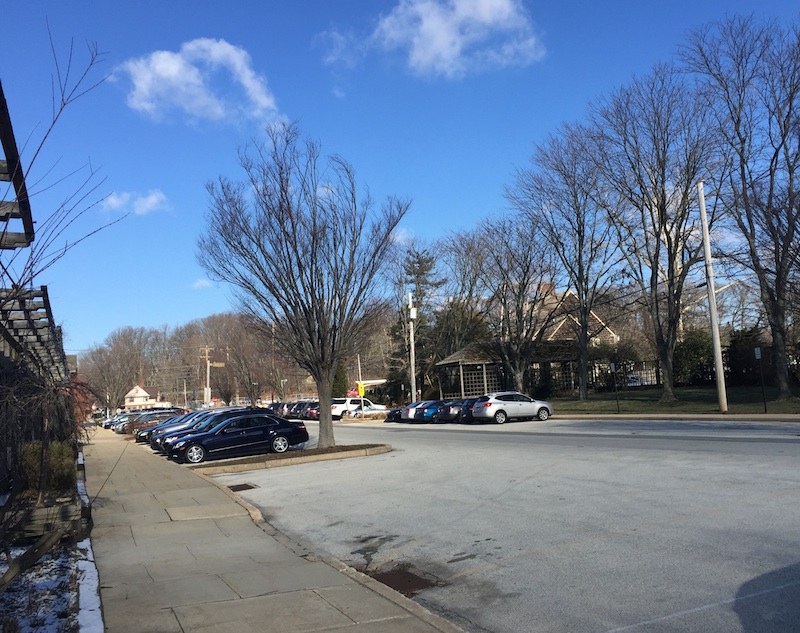 A view of Devon Blvd. with the old Waterloo Gardens at left. Across the street at right are the vacant shingled homes that would be bulldozed and replaced with below-ground parking, shops and four floors of luxury apartments.

Pretty much everyone is raving about the retail and restaurants. They’re even OK with a three-level parking garage – although fingers are crossed for a more charming peaked roof perhaps and shmancier camouflage landscaping.

It’s the five-story, 60-ft. high whopper that’s pitting neighbor against neighbor. “It saddens me to see how personal people are getting about it,” laments project supporter Richard Decker, a two-year resident of Berkeley Rd. “Some have been especially venomous. Everyone’s entitled to their opinion.”

A good number (but not all) of those with front-row seats in the family-friendly Berkeley/Chester/Waterloo/Dorset Rd. neighborhood are organizing against it. Those living further afield are generally in favor (again, with exceptions).

A letter, drafted with Kohn’s help, has been making the rounds to rally the opposition.

The Cliff Notes version: Letting Waterloo Devon L.P. (aka Kahn) put up a 60-ft. building when storefronts along Rt. 30 are capped at 35 ft. sets a slippery-slope precedent and is, in effect, spot zoning that would “change forever the residential character of this part of Devon” and create “unnecessary traffic, noise and density.” Signed by seven neighbors, the letter hints at Devon Yard turning into another Eastside Flats, Kahn’s massive mixed-use Malvern project that’s “now operated by Korman Suites” and allows leases as short as three months. (Eastside Flats is four stories, btw.)

Berquist calls Kahn’s apartment plan “laughable,” objects to the “bulk of the thing,” and claims Kahn wants to “obliterate current zoning” laws. “Easttown supervisors have cut people slack over they years and they shouldn’t have,” Berquist tells SAVVY. “The notion that Devon needs to be revitalized and made more walkable is bunk,” she says. Her neighborhood is “already vital,” with plenty of walkers, skateboarders, cyclists and dog-walkers (not to mention hotshots test-driving cars from nearby dealerships). She worries, too, that the tall building will “cast a shadow over the horse show in the afternoon … We don’t want the Horse Show to leave. They’re marvelous neighbors.” Kahn’s building will also strain Easttown’s police and firefighters, Berquist says.

A younger neighbor, Tim Phelan, tells SAVVY he wouldn’t have bought his house at the corner of Berkeley and Dorset four years ago if Kahn’s five stories had been looming nearby. He also worries about congestion and Devon Elementary School “busting at the seams.”

(The first, Easttown’s 2001 Land Use Plan, recommends the “creation of a new zoning district at the east end of Rt. 30 to provide for high density mixed use residential and commercial development.” The second, a letter from Chester County’s senior planner to Easttown’s manager (dated Dec. 2015), notes that Devon Yard “is located within the Suburban Center Landscape designation” of the 2009 County Comprehensive Plan and “recommends that municipalities should update their zoning ordinances to support infill and redevelopment efforts to create walkable neighborhoods” in Suburban Center Landscape areas.) 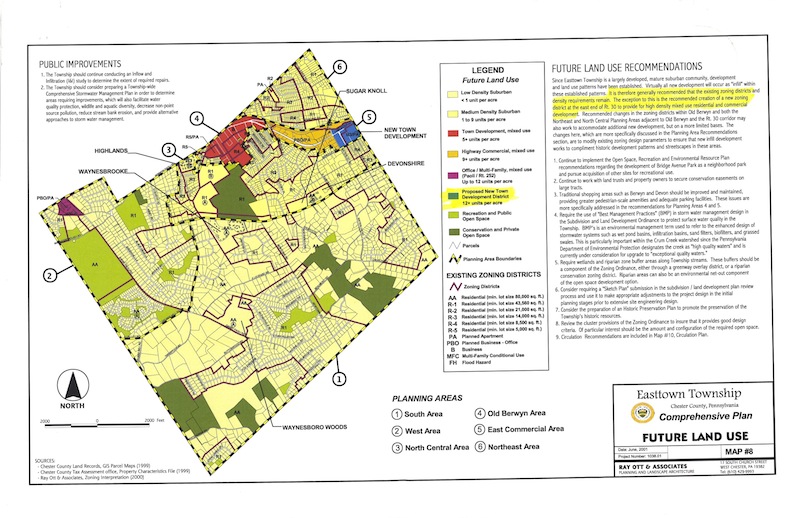 “Many, many of my immediate neighbors are in very strong support of the project,” Chester Rd. resident Kristin Schappell tells SAVVY. “We’re very excited about it.” Schappell talks about “misinformation” in the opposing camp. “People believe this will get developed without a dwelling. This is a lifestyle concept … Terrain is a beautiful company and if this doesn’t get built, be prepared for the alternative – a big box store or another car dealership.”

Schappell also points to the $1 million in potential tax revenues the T/E School District stands to gain, and the district’s demographic study which project that the apartments will add 16 students total (across 12 grades). As a point of comparison, Chesterbrook’s new townhomes will add 45.

Longtime Devon residents, Schappell’s parents are also firmly in Kahn’s corner. With a winter home in Florida, they’re looking to downsize and the prospect of renting a luxury apartment in their own hometown is appealing. The snowbirds’ daughter will read their letter of support at the Feb. 3 meeting.

And so, the battle lines are drawn: Kahn vs. Kohn. Neighbor vs. Neighbor. Yuck.

Who knows how this hot mess will play out with Easttown’s supervisors?

Waterloo’s been a shantytown since it went dark in July 2012. Kahn’s had the property for years.

Every day that his do-over is delayed is hitting him where it hurts. Long term, I’m not so sure that’s a good thing for Easttown. And I know it’s a bummer for all of us who just want to get our paws on Vetri’s world-class pizza pie.