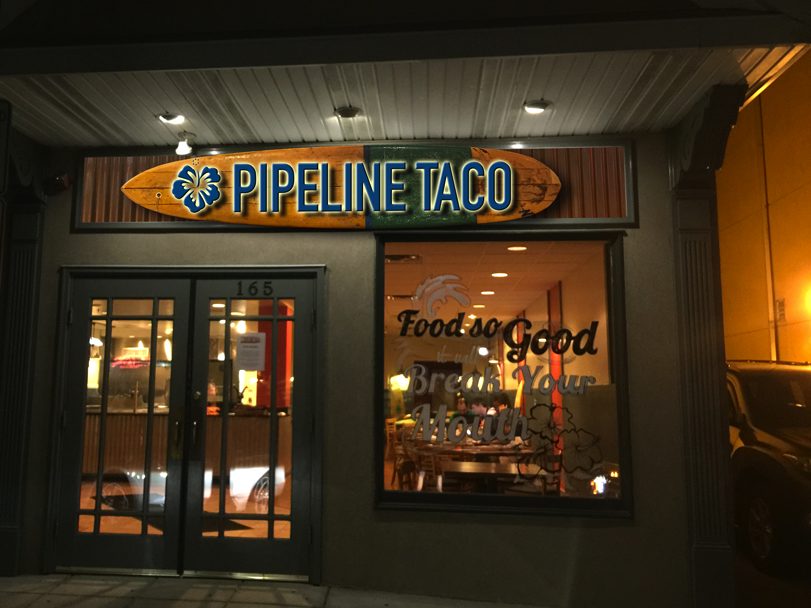 Holy Guacamole! Are we having a taco moment or what? By the end of the week, three new taco joints will have opened along a 4-mile stretch of Lancaster Ave. in less than a month. For the owners’ sakes, let’s hope that’s not one tortilla too many.

Tacos here are “island-inspired” – literally. The taste-of-the-tropics menu and ultra-casual surfer vibe are a riff on Killer Tacos, a taqueria on Hawaii’s North Shore with a cult-like following. 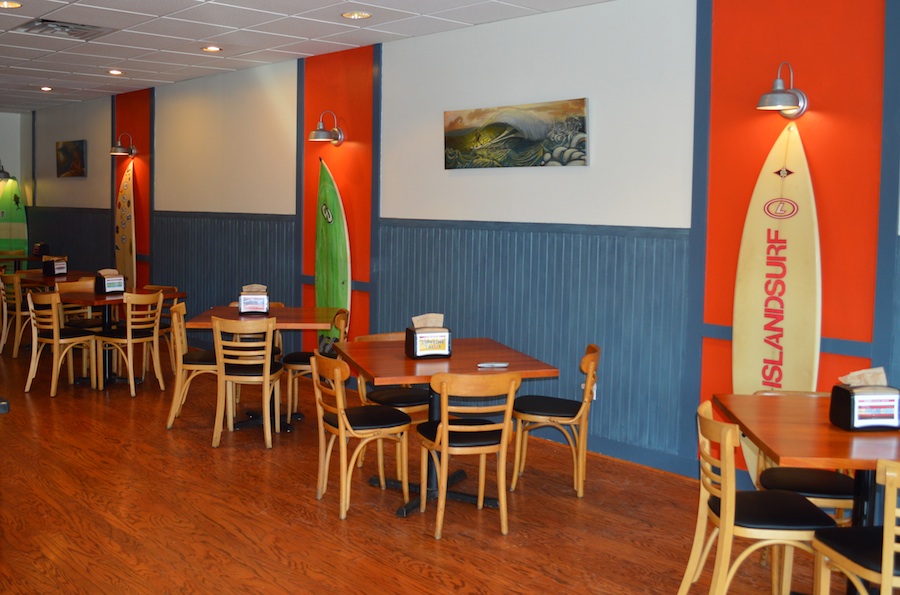 No need to tip a server. At Pipeline, you order at the counter and food is taken to your table. 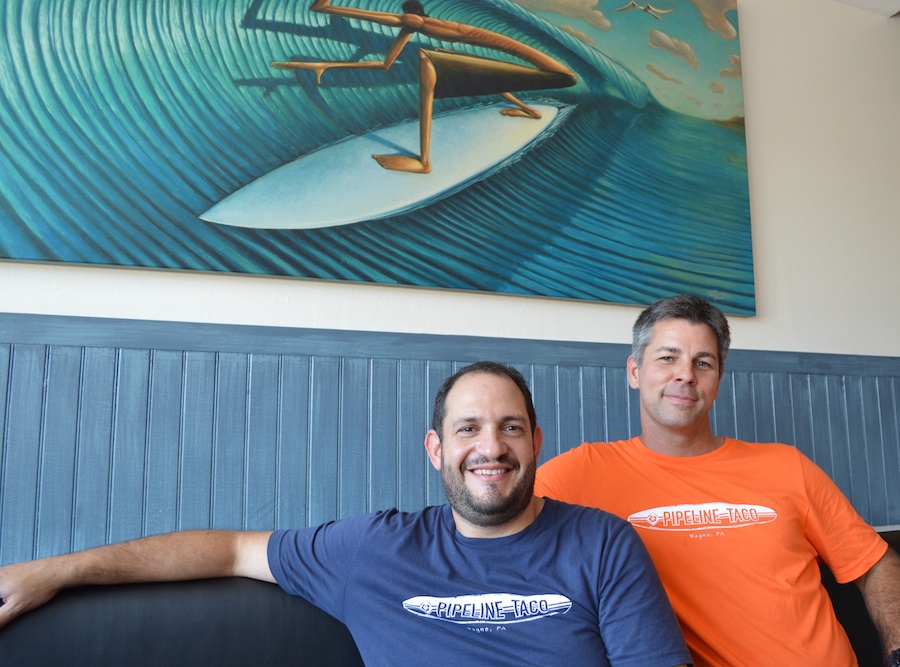 “A taco and nacho maniac” and sometime surfer, Jeff fell hard for Killer Tacos when he worked in Hawaii and obsessed for years about replicating the concept in Wayne. Adam is a CIA-trained chef who was itching to open his own place. As the story goes, the two talked tacos over beers at McGillicuddy’s less than four months ago and scouted a walkable Wayne location the very next day.

Pipeline’s six taco varieties are served on gluten-free soft corn tortillas (or ask for flour). According to Chef Adam, the hottest sellers so far are the Pipeline (tempura-battered or grilled fish with mango papaya salsa and cilantro lime mayo, $4.50) and the Kalua (kalua pork with pineapple chipotle salsa and Korean BBQ sauce, $3.50). 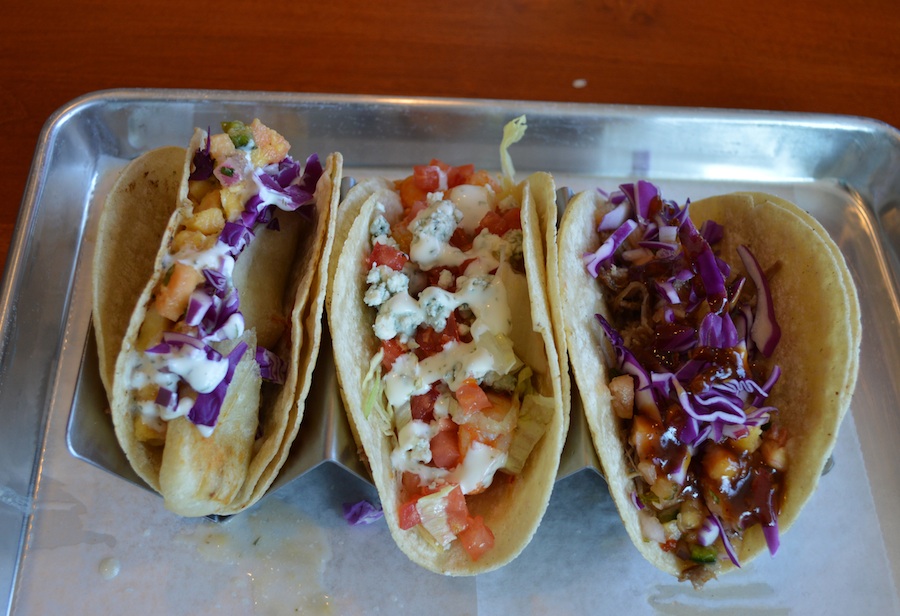 Any of the six can be “rolled” into burritos or “bowled” into rice bowls or salads for $9. Rounding out the menu are the usual suspects: “Killer Nachos,” chips and salsa, and house-made guacamole. (Mix the super-fresh Pico de Gallo in the guac for extra bite.)

Tacos here are about as healthy as tacos get – beef is grass-fed and chicken is antibiotic- and steroid-free, says Adam, who aims to source everything locally within a year (except for the tropical fruits, of course).

Upping the health quotient will be a smoothie bar with 24-oz. organic, “meal replacement” smoothies ($6.99) that should be operational in a week or so.

BYOB is encouraged; delivery service and corporate catering are in the works.

“Tacos are kind of like pizza; only a few places do them well,” says Jeff, who manages to mix laid-back surfer dude with boyish bubbliness. “We offer fantastic value and flavor where there’s been a void on the Main Line. There’s a huge opportunity here; we just want to crush it.”

Preceding Pipeline by a few weeks, the wildly popular, no-frills Conshy-based taqueria El Limon opened its fourth spot in Ardmore in June, then surprised everyone with a late July debut just up the Pike in Bryn Mawr.

“They’re too close,” said a server, explaining the sparse diners last Saturday afternoon in the former Tres Guppy’s space next to Vge Café. No doubt owners are banking on bigger crowds when the college kids return in a few weeks. 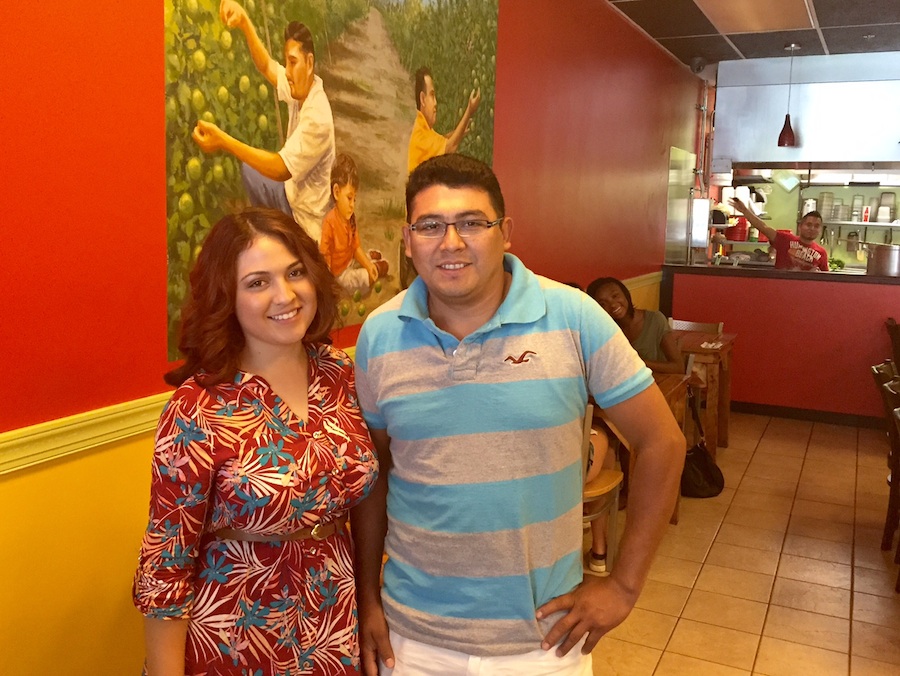 Cousins Isaias Dominguez and Manuel Ruiz have opened five El Limons in five years and they aren’t finished yet. Isaias tells SAVVY the two are planning a full-service Mexican restaurant and bar (name TBD) across the street from their original joint on Fayette Street in Conshohocken.

All El Limons are BYOB but, get this, Margaritas are always on the house. (If you like yours on the rocks, seriously sweet and salt-free, you’ll love theirs.)

Two blocks from El Limon, Xolo Tacos may call itself a “taqueria” but aspires to be much more than a taco shop when it opens later this week in the former Fuji Mountain next to the fire station

A full-service Mexican restaurant, it will compete for the tapas-and-tequila crowds at Verdad, Xilantro, Matador and the soon-to-open Besito in Suburban Square. 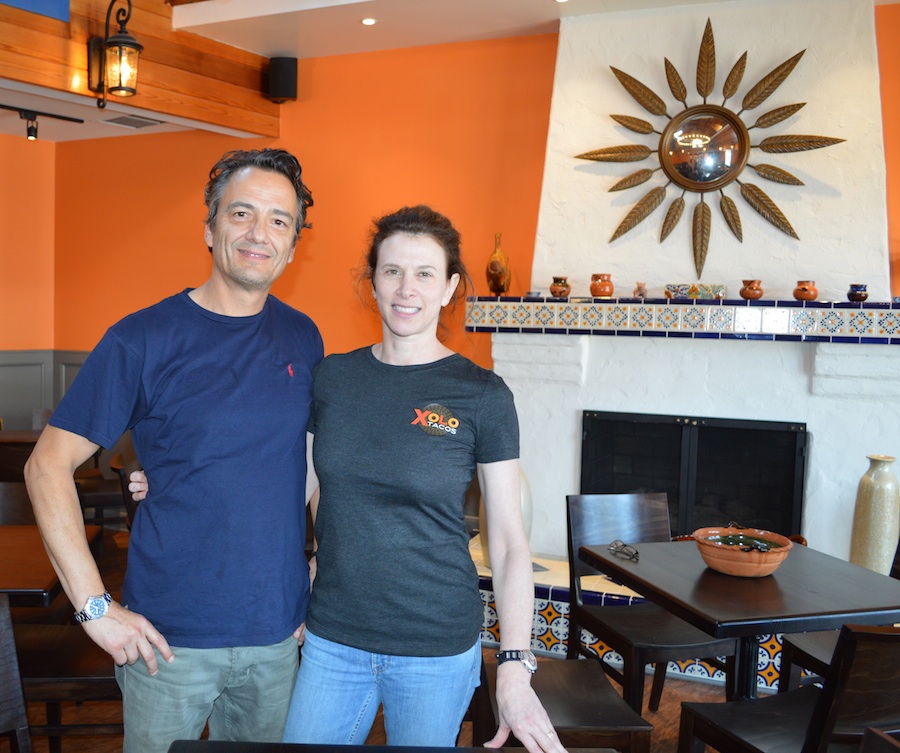 Carlos Fink grew up in Mexico City and has worked in Philly restaurants for years. A recent PAFA grad, Hayley put her art career on hold to open Xolo.

The couple had planned to rent space for a humble BYOB taco joint but saw opportunity when the quirky two-story building with a liquor license went up for sale on Merion Ave.

Cooking up authentic Mexican dishes (including “legitimate tacos” and tableside guacamole) will be Chef Alfredo Aguilar, who’s also chef-owner of Las Cazuelas, a casual Mexican BYOB in Philly. Aguilar’s recipes will be “traditional and time-tested, nothing fusion or experimental,” Carlos tells SAVVY.

The new south-of-the-border décor is warm, tasteful and inviting; nothing kitschy here. A full-service bar stocked with 30 tequilas (olé!) replaces Fuji’s sushi counter. A cozy, second-floor room overlooking the dining room can be reserved for private parties. Alfresco dining out front – with heat lamps and misters – is on tap for next year.

When I visited over the weekend, the menu was still being tweaked but a peek at the latest draft showed entree pricing in the teens and low 20s.