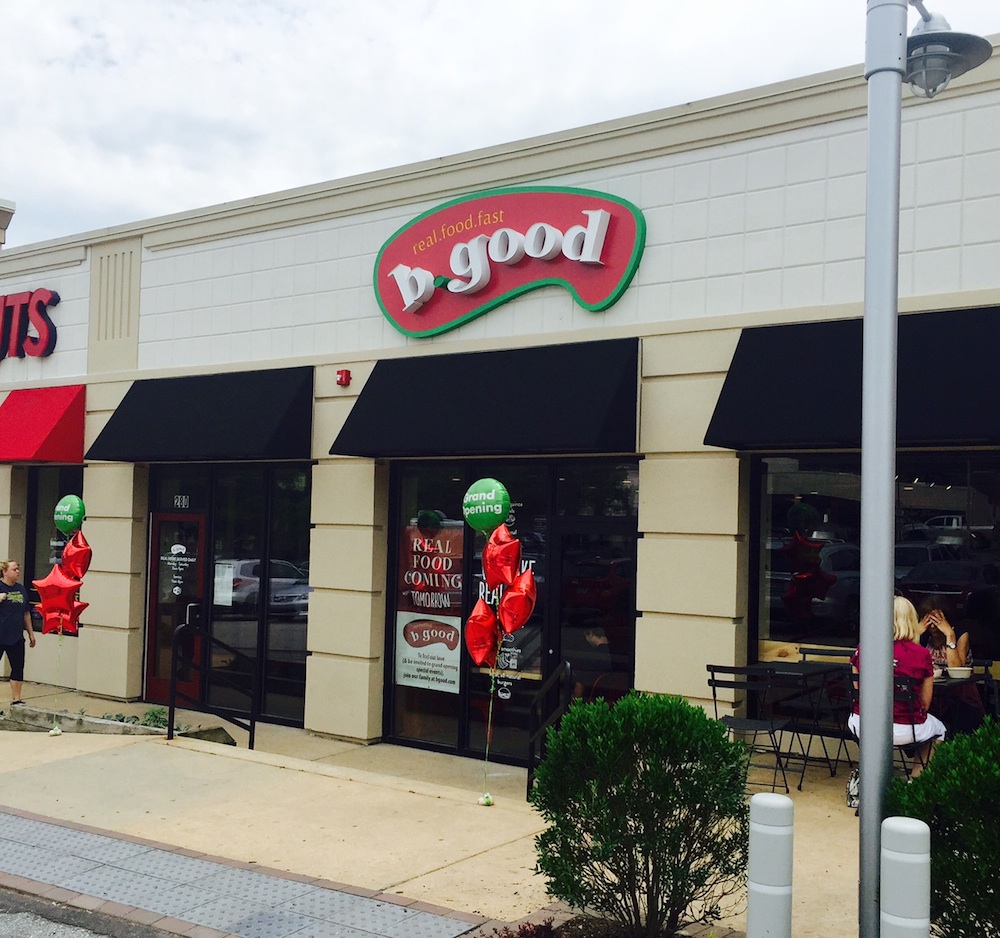 B.good, a fast-food joint catering to our better angels, has descended upon the Main Line. Not only is its first restaurant now open in Wynnewood Square, it’s also dispatching this little puppy to serve up free smoothies to Main Line businesses this month. (Pitch a visit to your workplace via [email protected]) 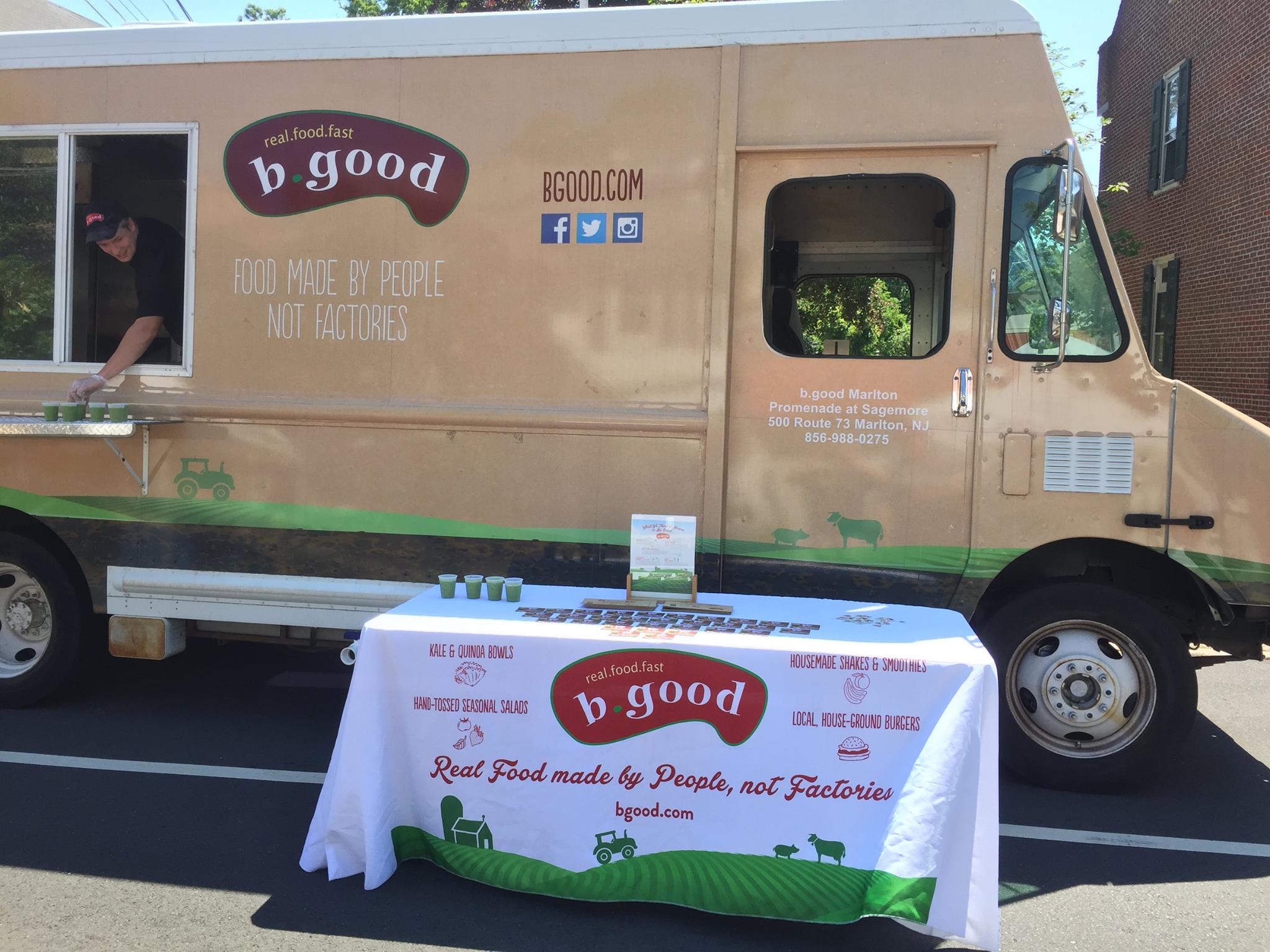 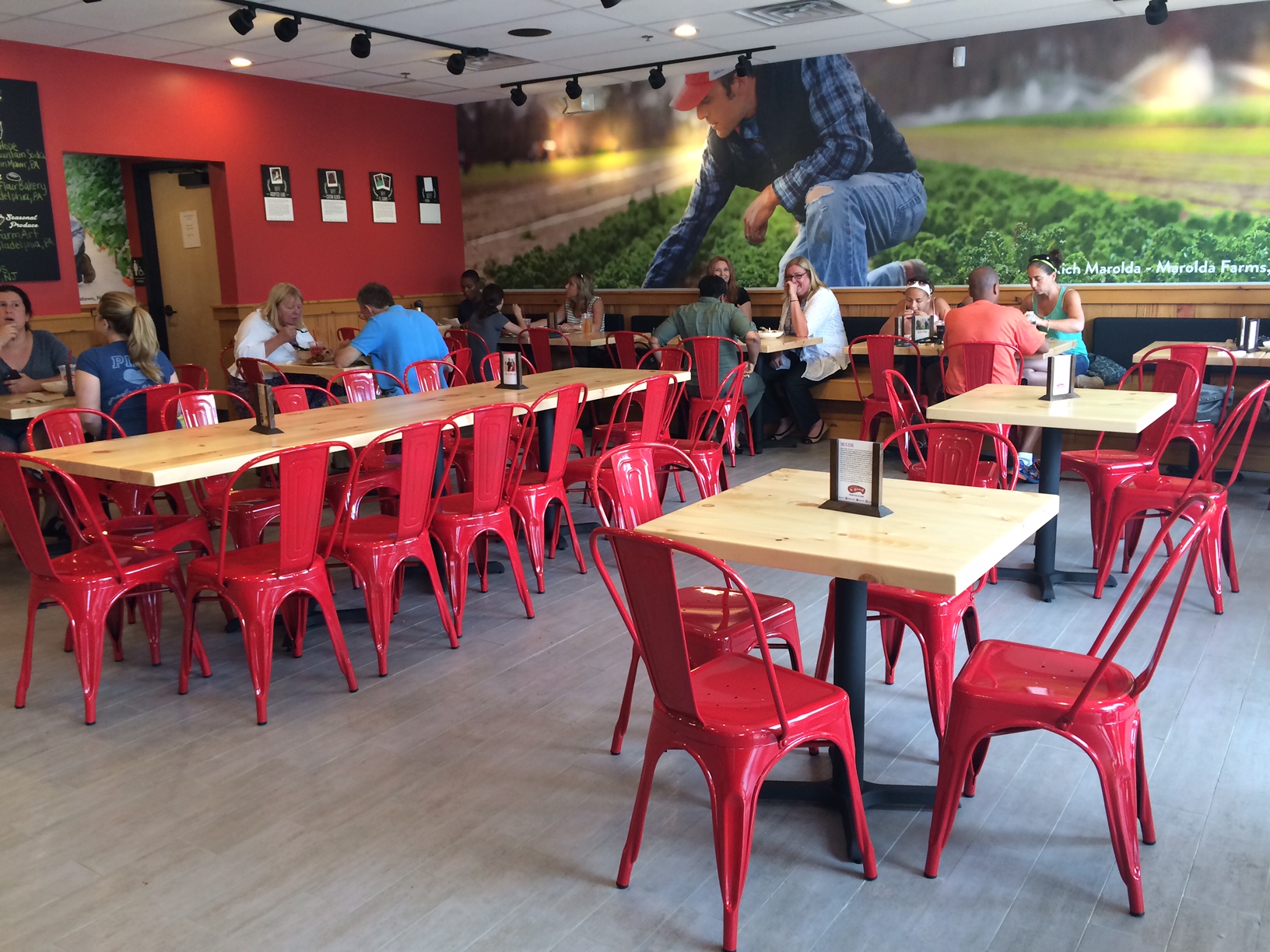 And Farmer Eric, also from Jersey. 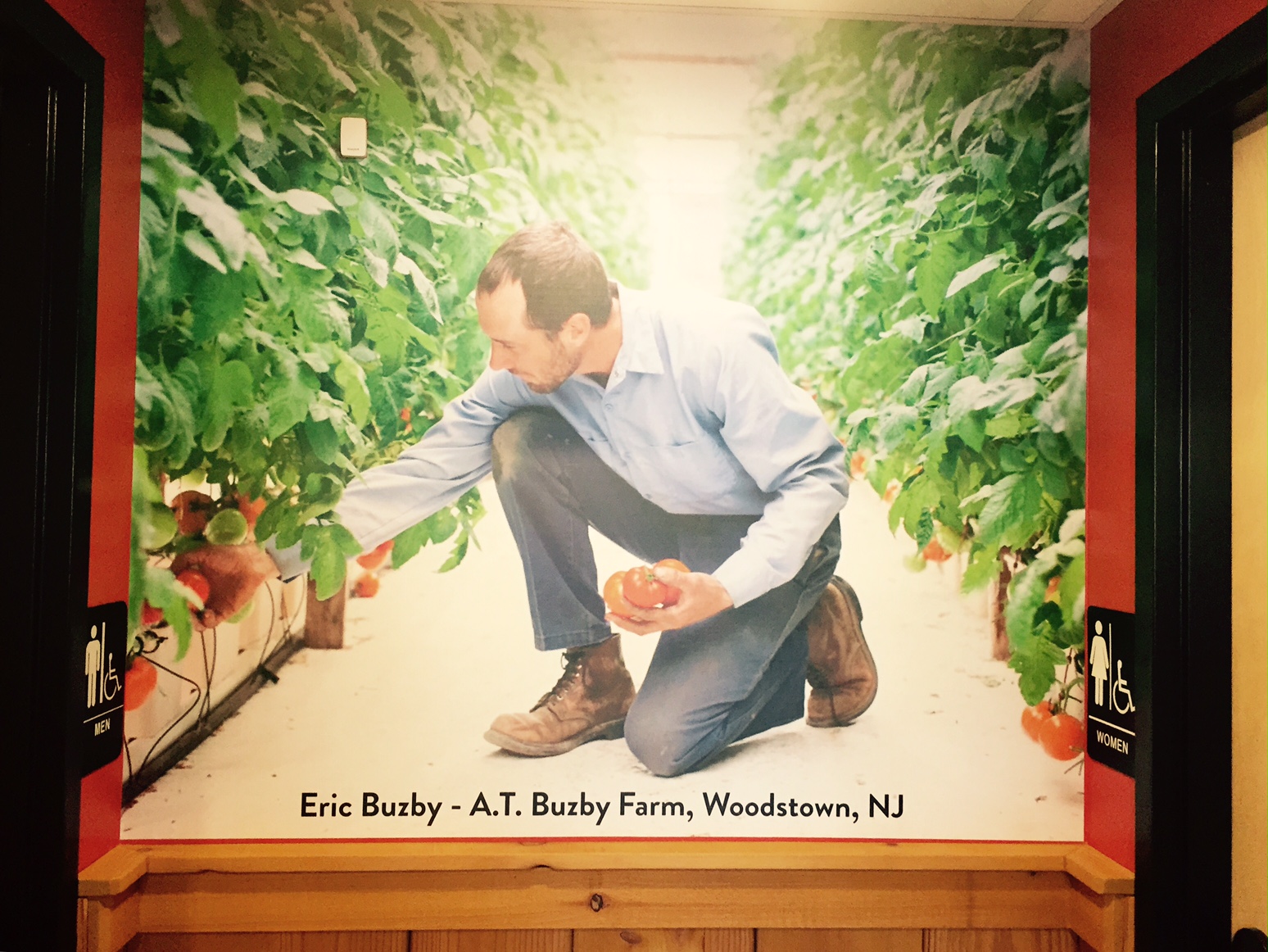 A chalkboard shows how everything comes from near and nearer. (Whoops! Whoever wrote this couldn’t have been local. See why?) 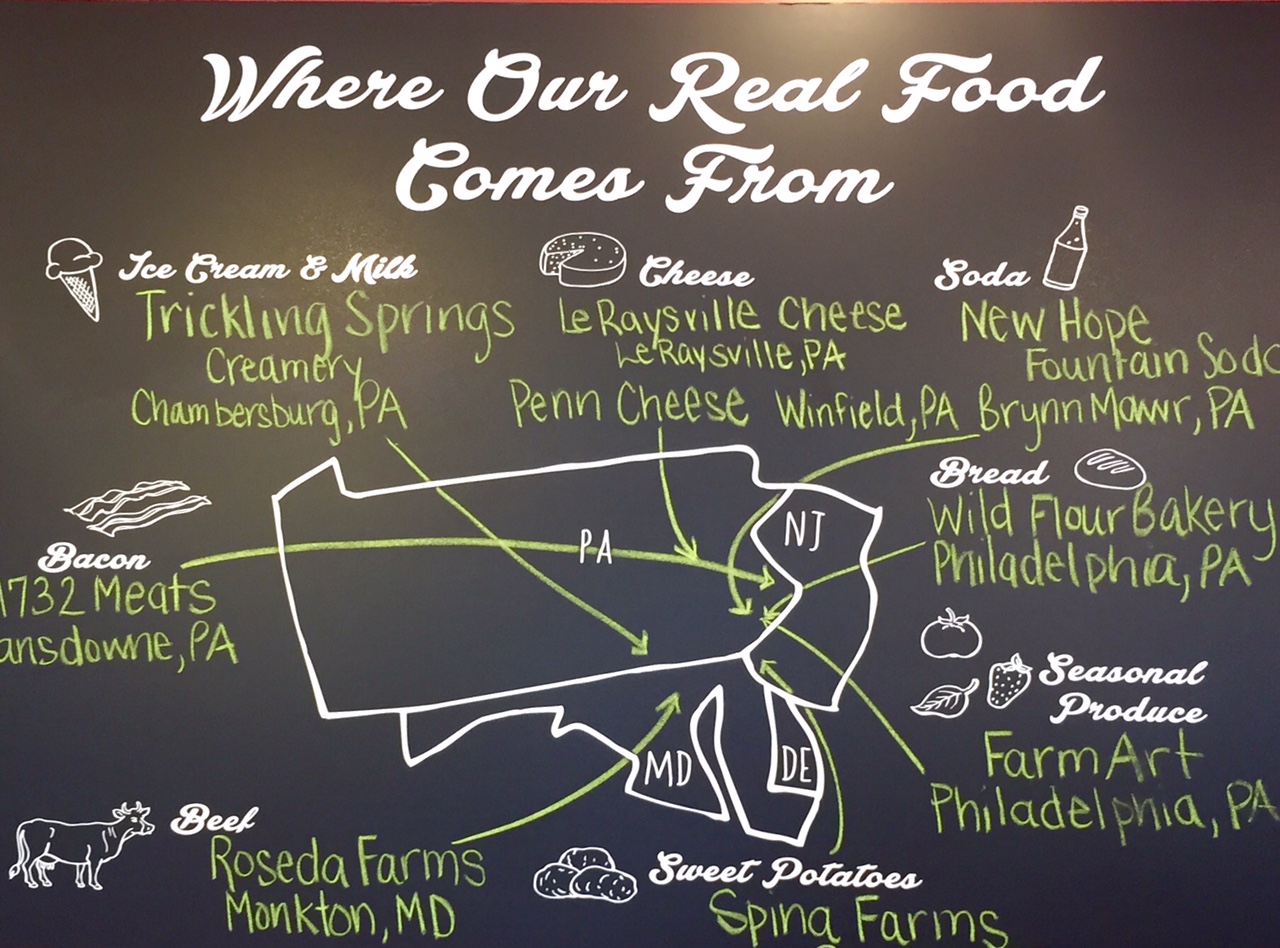 B.good owner Deb Lutz is also native to Bryn Mawr, making her at least as local as her food. But the local shtick extends only so far. The b.good company, a 22-restaurant chain, is based in Boston.

This is Lutz’ second franchise. Her first is in Marlton, NJ and there may be more to come. Lutz tells SAVVY she’s already scouting sites in King of Prussia, Plymouth Meeting and Conshohocken.

I visited Wynnewood twice. My first lunch, a turkey burger, was pretty good and would have been better if it hadn’t been overcooked – an opening day goof-up, no doubt.

On Saturday I wanted to be good – or a wee bit better, at least. I chose the Harvest Kale Salad ($7.99): tangy, tasty and just 309 calories, not counting the cage-free egg ($1.49) sitting trendily on top. My husband flipped for his West Side burger ($7.49) topped with avocado, cilantro, chipotle purée and lime.

95 percent of the menu can be made gluten free, according to Lutz. (Vegans get much slimmer pickins.)

But don’t let the angelic name fool you. It’s easy to be bad here. Beckoning from the counter are “jars full of cupcakes” and colossal cookies from the gluten-free Grain Exchange. Tempting “carrot cake” smoothies slide down with 18 grams of saturated fat. And though they hail from Trickling Springs Creamery, the chocolate shakes are positively gushing with calories – 745!

To the staff, it’s “Little Wayne.” 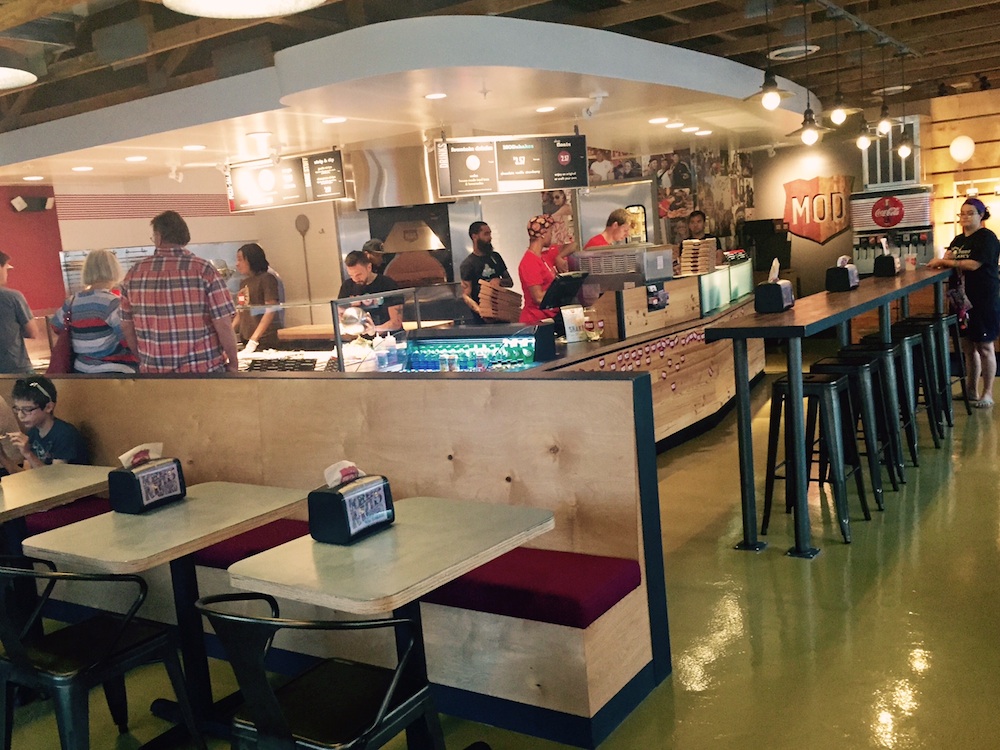 To the rest of us, it’s MOD Pizza’s second Wayne store in as many months, open since Sunday at the old Melt Down on Lancaster Ave.

Little Wayne should not to be confused with “Big Wayne,” the new MOD Pizza in the Gateway Shopping Center. Same design-your-own-pie concept; a lot fewer seats (32 on Lancaster Ave., nearly 100 in Gateway).

The manager pointed out that MOD squaders start at $10/hour. Take that, Chipotle in Haverford(!) where an employee was fired after tweeting about his $8.50/hour pay rate and skipped rest breaks.

Congrats to Teresa Wolfgang, new Exec. Director of the Women’s Resource Center. A Villanova alum and former U.S. Army officer serving in Iraq and Afghanistan, Teresa brings years of service – mentoring Afghani businesswomen and assisting women veterans, for starters – to the Wayne-based nonprofit. Michele Daly’s pumps are big, but we’re sure Teresa will fill them with distinction.

Hats off to Whoever Donated $400,000 Anonymously to Emily’s Entourage, the Lower Merion-based charity started by Emily Kramer-Golinkoff and her fab family to find a cure for rare mutations of cystic fibrosis. I, for one, am looking forward to EE’s December gala. Nobody gives a speech – or champions her cause more effectively – than the inspiring Emily K-G.

And finally, SAVVY sure was psyched to spot society reporter Maggie Henry Corcoran in 6abc footage of the Philly’s delegation meeting with Pope Francis. (How did you swing that sweet gig, Mags?) My longtime sidekick at Main Line Media News, Maggie recently moved on to the Inquirer where her Cause & Celebration page is published each Sunday. Congrats on both coups, Maggie!