Over the years I’ve bid on and “won” a fair share of charity auction prizes. Among the more memorable: a week on St. Martin, a finish-line box at the Preakness, and a cocktail party on a terrace overlooking Rittenhouse Square.

But nothing quite compares to the prize I won at WXPN’s spring fundraiser and claimed last weekend: a speaking part in a movie in New York City, all expenses paid.

(Little known fact about me: All things being equal, I’d rather be acting. I took acting lessons as a kid and have belted out show tunes for years – lustily, if not always tunefully. Another fun fact: Indiana Caroline is almost always game for adventure.)

I was cast as “Woman” in the indie film, Louis Kahn, after a Skype interview with the filmmaker who donated the prize, Zac Kline of Missing Bolts Productions.

I figured Louis Kahn would never make it to the multiplexes but held out hope for a screening at the Ritz or Bryn Mawr Film Institute.

Until I was emailed the script, which totaled eight pages, triple spaced.

OK, so it would be a short film. Whatever. I was still more than ready for my close-up.

Zac arranged for my Acela, stay in a nice Midtown hotel and limo ride to the set for my 11 a.m. call last Monday morning. (Woohoo! I had a “call time!”)

Makeup artist Roberto Casey whisked me away to work his magic. 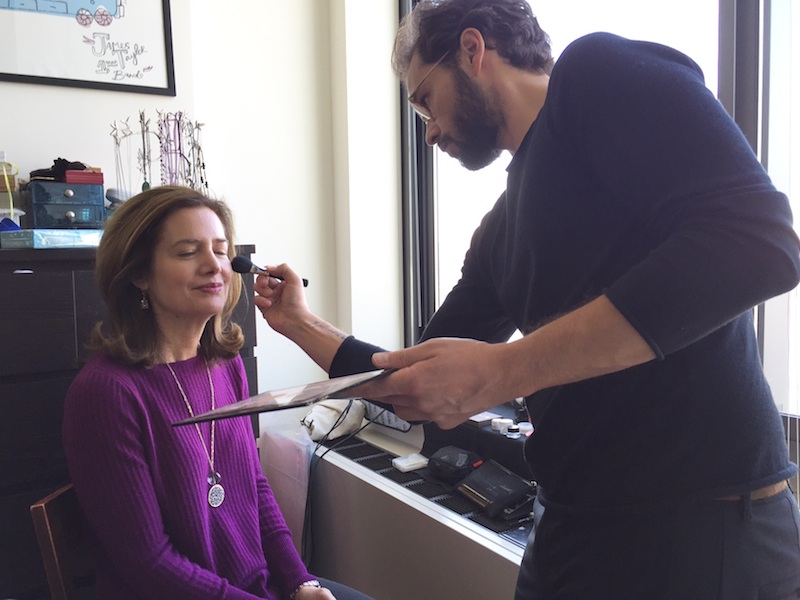 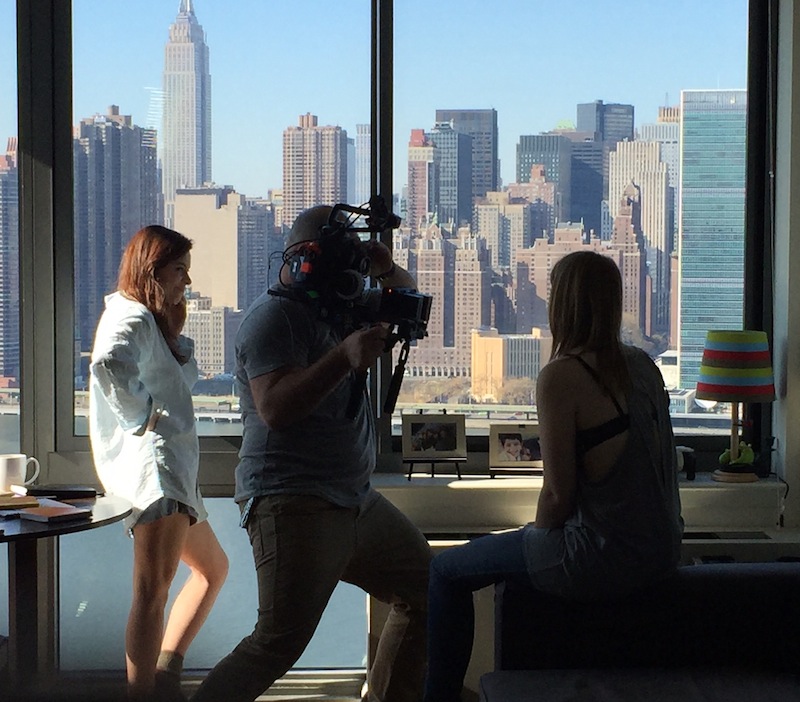 I was impressed. Don’t overact, I told myself. Acting for film is subtle. Less is more.

When it was time for my, ahem, star turn, the cameraman reached down the front of my shirt to stick a microphone to my chest. When he learned I wasn’t a “real” actress, the poor guy couldn’t stop apologizing.

After a through few walkthroughs with the director, my scene wrapped in four or five takes. Way too fast but tons of fun. I sort of wish I had flubbed my three lines so we could roll ’em again and again. 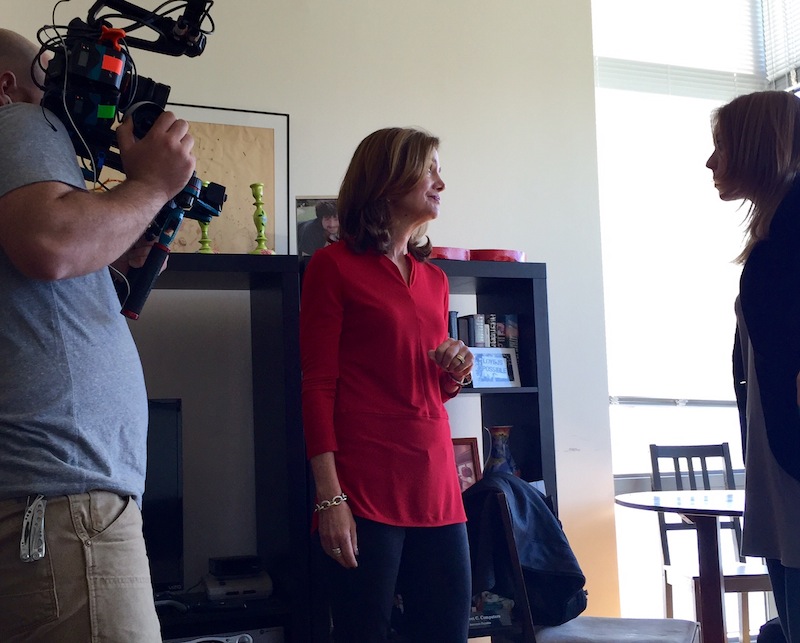 The cast and crew later said I was “great” but were probably just being polite. (I’m guessing I was a smidge above mediocre.) 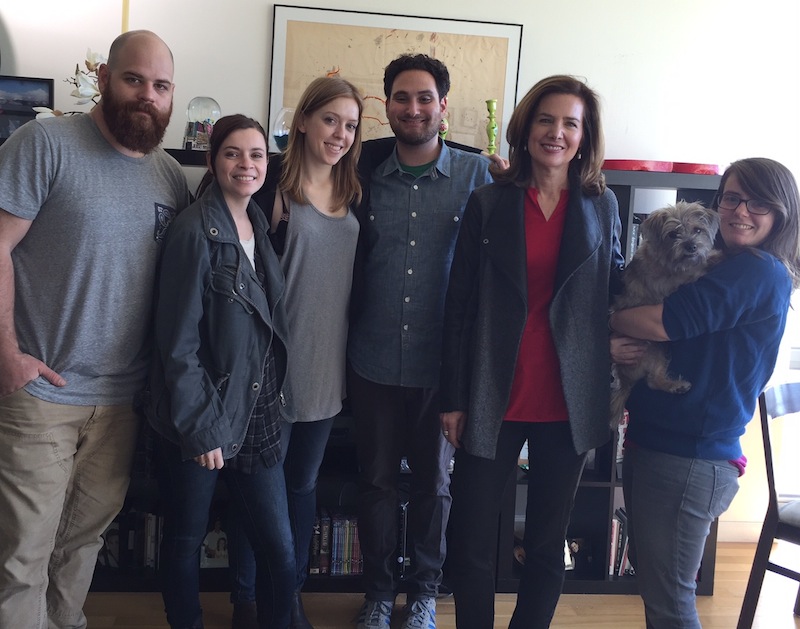 There was talk about entering the film in a few festivals – alas, neither Cannes nor Sundance.

I did just happen upon some promising news: Bryn Mawr Film Institute shows short films now and again. So who knows? Next year, you might just catch me on a silver screen near you.

Speaking of the Bryn Mawr Film Institute, the nonprofit community theater wraps up its 10th anniversary celebration next month with three special events: a cocktail party and short film contest (judged by actress Lee Grant), a Q&A with Marni Nixon (the dubbed singing voice behind Audrey Hepburn in My Fair Lady and Deborah Kerr in the King and I, among others), and a sing-a-long Sound of Music.  (Count me in for that last one!)

In ten years, BMFI has doubled in size, swelled to more than 8,000 members and is the highest grossing suburban art house in the country. Bravo!

As my husband and I strolled Suburban Square this weekend, checking out the new pop-up stores and noting the vacancies, we had an inspired thought for the circa 1930 Macy’s building, due to go dark in the spring: Convert it to luxury condos! Live on the Square and walk to EVERYTHING, including the R-5!  Main Line developers, are you listening?

One of the many things I love about Mojo Fitness, my crazy-fun dance fitness class, is that I never know who will walk through the door: an old PTO pal, a former neighbor, a onetime colleague, a mom from the old playgroup.

This week’s surprise Mojo-er wasn’t an old friend, but as a Phillies fan, I sure knew his name: Fredi Gonzalez, manager of the Atlanta Braves.

A Major League Baseball bigwig showed up at Nackord Karate in Gateway Shopping Center to shake it off with three dozen women! (Now that’s what I call a Brave.)

Fredi came with his girlfriend, Tricia Zervanos, a regular Mojo-er. And even though he couldn’t quite pull off all our cool Mojo moves, he smiled his way through all 60 minutes. 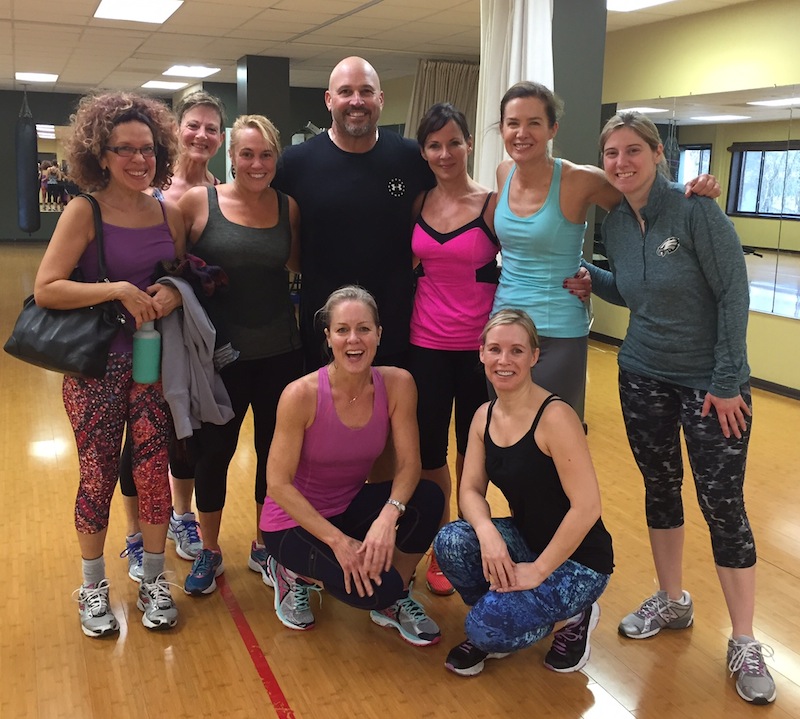 Atlanta Braves Manager Fredi Gonzalez and girlfriend Tricia Zervanos (at Fredi’s right in pink) and some of the Mojo gang after our Wed. workout.

A good sport (and heck of a nice guy) like Fredi could almost turn me into a Braves fan. Almost.

Some friends and I tried to “Escape the Room” in Philly last Saturday night … and failed miserably.

For the uninitiated, Escape the Room is an interactive group game that’s getting lots of buzz in Philly and other cities. Basically, you and nine friends (or strangers) are locked in a room in a Center City office building and have one hour to get out, using teamwork and sleuthing to find clues and solve puzzles. 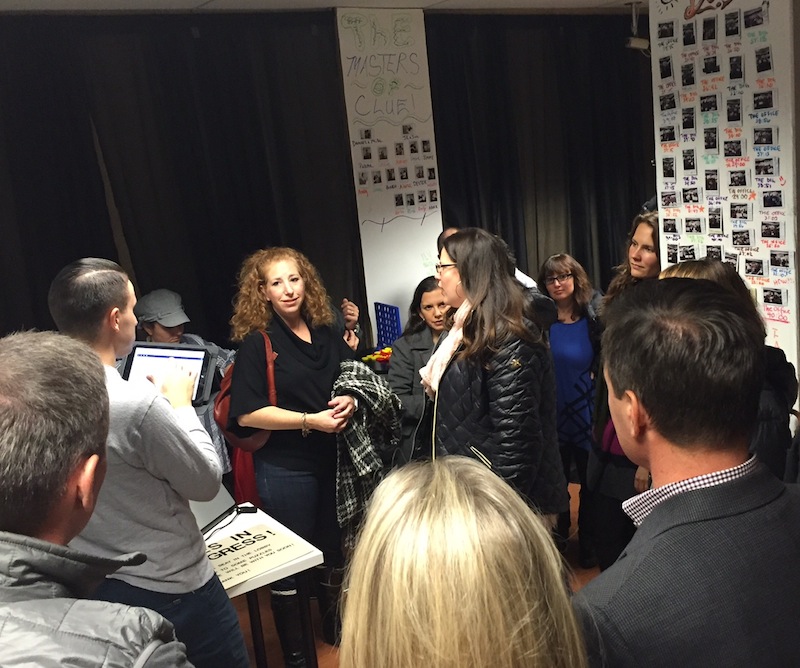 Awaiting our turn to “Escape the Room” on Walnut Street.

The Philly game costs $30 pp and comes in two versions: “The Office” and, the one we opted for, “The Dig.” I won’t spoil your fun by spilling the beans but can tell you this much: prepare to be humbled.

Twenty percent of gamers get out in time, according to the Escape the Room Philly folks.

If our group of physicians, lawyers, corporate executives, Ivy Leaguers and entrepreneurs couldn’t figure it out, who the heck can?

The game is loosely based on a video game so I’m thinking our age didn’t help us.

Next time, I’m bringing my kids.