In truth, I probably wouldn’t have gone at all if I hadn’t won tickets in my church’s lottery. The spirit was willing but my 50-something flesh was weak (and skeeves porta-potties).

My initial plan – to watch Pope Francis on TV with my devoutly Catholic parents in the comfort of their shore home in Longport – sounded pretty darn appealing.

Still, something made me put my name in St. Norbert’s lottery.

And Someone allowed me to win. God wanted me there, I figured.

Besides, I’ve long had a thing for this particular Pope.

“Cool Pope” is what my son and his girlfriend call him.

Like them, I’m inspired by his “who am I to judge?” message of inclusion and ecumenism, by how he’s chosen to live his life as Jesus did – simply, in scuffed shoes and a no-frills Fiat, by his call to care for Mother Earth and for those on the margins: the sick, the old, the jailed, the poor.

Francis, like Jesus, is a bit of a revolutionary. And I think (actually, I hope) that he’s just getting started.

But I digress. My tickets didn’t mean I’d have a reserved seat. (I’d won the lottery; not the jackpot.) They simply guaranteed that I and 80,000 other pilgrims could plop ourselves down in the sections of the Parkway closest to the stage for Saturday’s Festival of Families and Sunday’s Papal Mass.

Scared off by sky-is-falling predictions of 10,0000 people boarding trains in Paoli, my husband, my friend, Carol, and I decided we’d buck the tide and drive from Malvern into Philly. (Who knew that only half of the 7,000 SEPTA passes for the Paoli station would actually be used and people would practically waltz onto waiting trains?)

Our drive (via Rts. 252, 476 and I-95) was a snap. Better yet, we found free, on-street parking just outside the “traffic box,” only a few blocks from my daughter Kara’s condo where we planned to spend the night.

But this was a Saturday straight out of the Hunger Games: eerily quiet with soldiers – actually, National Guardsmen – stationed at every street corner.

In high spirits, Carol, and I dropped off our overnight bags and promptly set off on foot, purposefully choosing the street instead of the sidewalk because, well, we could. 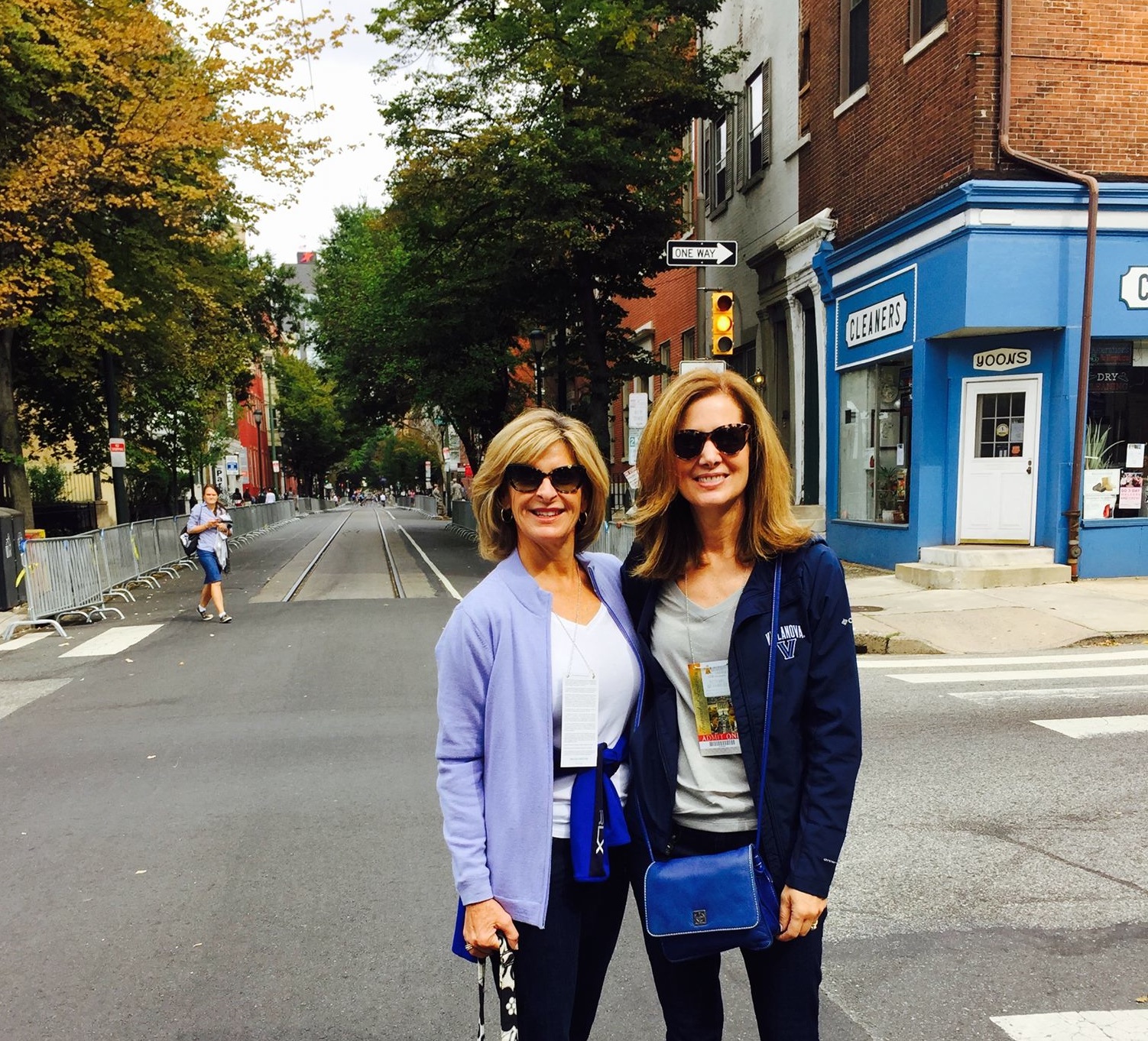 After a few wrong turns onto barricaded streets, we found ourselves at a security checkpoint near City Hall. The TSA guys let us keep our water bottles but made us pitch an apple (killer fruit!) and two hard-boiled eggs.

Our total time in the security line? 40 minutes.

We hoofed it to the ticketed zone and found a spot near the rail to await the Papal Parade and the Festival. 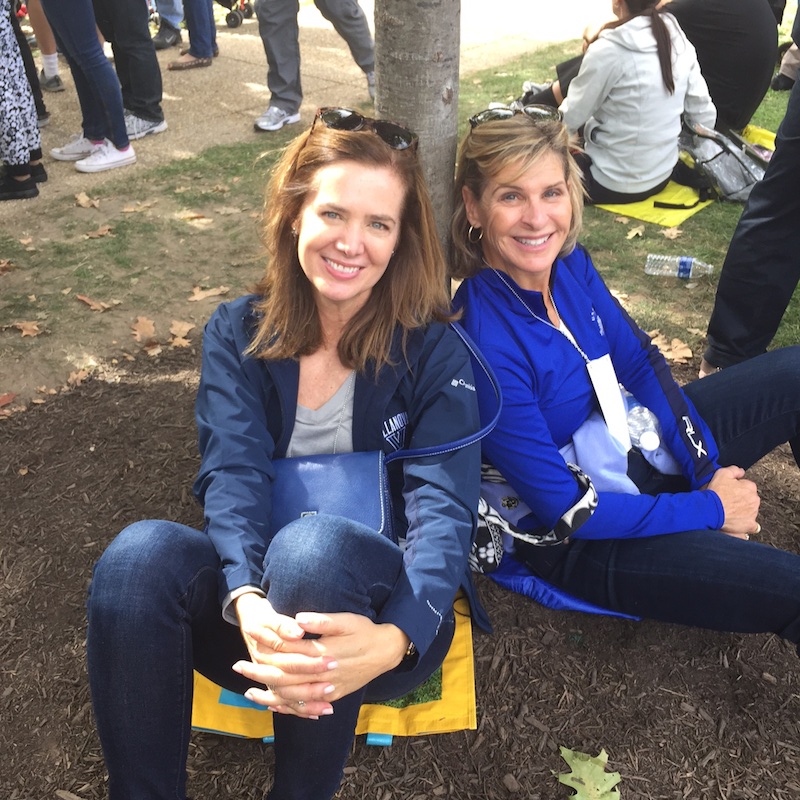 It was around 2 p.m. so we had at least five hours to kill. But what are five hours when the Pope, Andrea Bocelli, the Philadelphia Orchestra, The Fray, Aretha Franklin and Marky Mark await. (Oh, and did I mention the Pope?)

We passed the time playing Hangman and Angry Birds, and chatting with excited pilgrims from around the world.

In what has to be a Philly first, I’m certain I could have left my backpack unattended and returned to find it untouched.

We asked our Parkway “neighbors,” a family of 19 from Peru, where they were staying. They explained – without a hint of complaint – that they couldn’t find lodging and had slept in two vans the night before. Tonight, they hoped the Good Lord would provide beds for them, but if He didn’t, they had the vans, didn’t they?

It was almost dark when the Jeep Wrangler Popemobile finally appeared, cruising by so fast that our cell phone photos were a blur of white light. 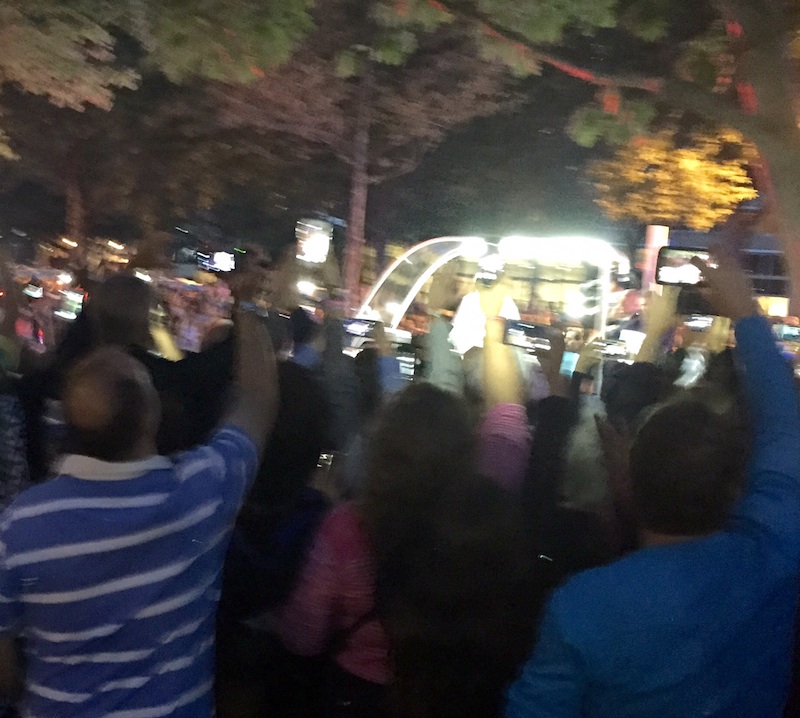 So, our pictures stink but, hey, we saw him. We were jubilant, ecstatic even. Mission accomplished. The Festival was pretty cool too. Tops for me was the astounding voice of 14-year-old Bobby Hill, Andrea Bocelli’s other-worldly rendition of the Lord’s Prayer, and the Pope’s off-the-cuff speech about families. (I’m pretty sure the boy soprano and the Italian tenor were Francis’ favorite performers, too.)

The next day was a whole nother story.

Completely worn out from our late night on the Parkway, we didn’t head out until late morning, Surely, we would clear security in plenty of time for the 4 p.m. Mass.

Apparently, everyone who heard about Saturday’s smooth sailing decided to schlep to the city on Sunday.

Expecting maybe a two-hour wait, we cheerfully joined the hordes at 18th and JFK, a few blocks from the security checkpoint near Logan Circle. 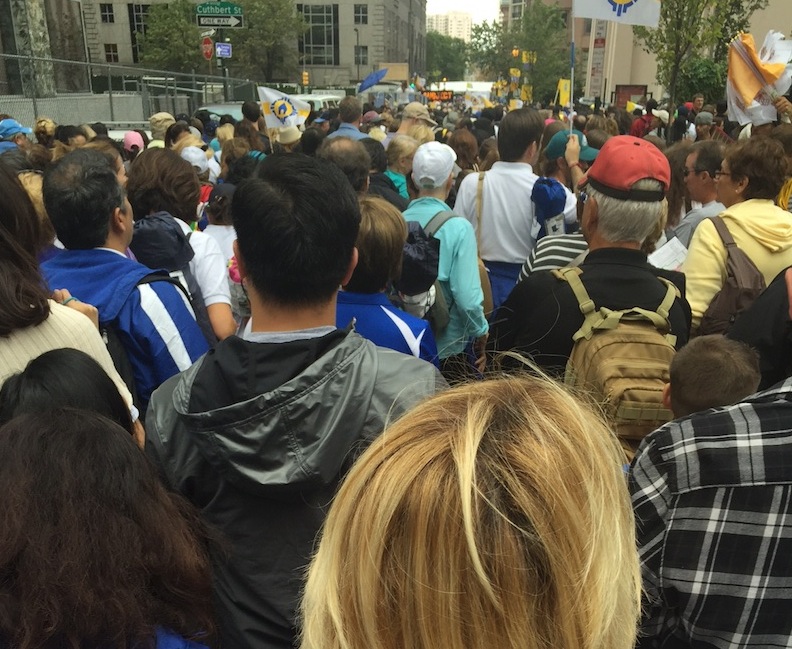 Two hours stretched to three and then to four. Packed shoulder to shoulder, we shuffled forward, averaging a few feet every 15 minutes. Not once did an official show up to explain the delay or estimate the wait time.

We passed the porta-johns early on, and after that, well, you didn’t dare drink a thing. An enterprising young man tried to sell us $175 passes to view the Mass from the top of nearby office building. (I can’t say I wasn’t tempted.) An Au Bon Pain server stood on a barricade hawking $5 pizzas and had plenty of takers.

About a half hour after the Mass started, a few cops showed up but could tell us nothing. Why wasn’t the line moving? Was the checkpoint closed? They had no idea.

At 5 p.m., with maybe a thousand people still ahead of us, another thousand behind us and the Mass half over, our backs aching and our feet numb, we bailed.

Scores of us jumped the iron fences. If there had been a bar en route we probably wouldn’t have made it to a Broad Street Jumbotron where we caught the last few minutes of Mass. 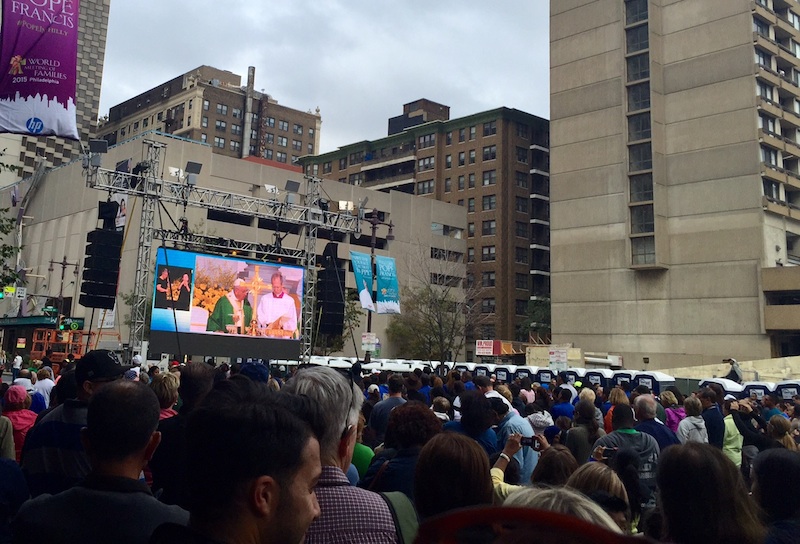 My point here isn’t to complain. It was still a glorious, unforgettable weekend. And if Sunday was a bust, Saturday more than made up for it.

Papa Francisco came to town and millions heard his message. At the end of the day, isn’t that what matters most? 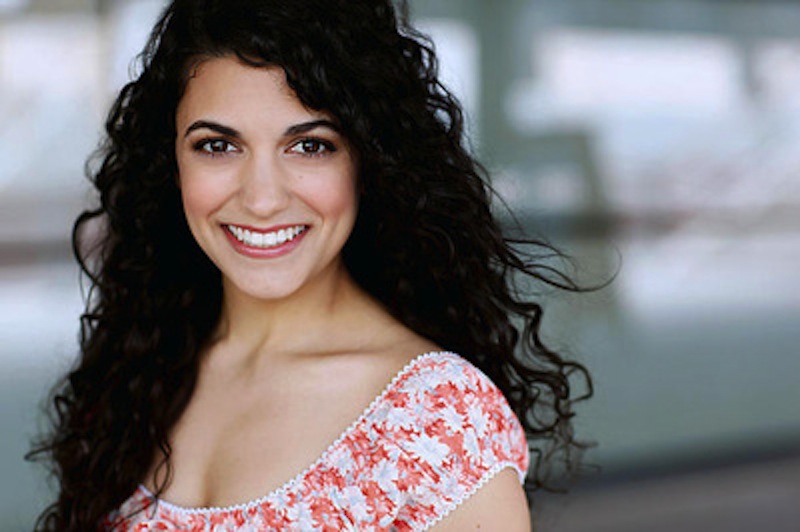 Awarded the part solely on the strength of her audition, Meredith plays a bank teller whose window is approached by Michael Caine.

Meredith is a graduate of NYU’s Tisch School of the Arts and has landed roles in theater, film and TV, most recently starring in the web series, “Here We Wait.” Can’t wait to see you on the big screen, Meredith!

If you’re looking to remodel your kitchen and could use a little inspiration, you may want to check out the seven Radnor homes on Sunday afternoon’s Recipe for Success Kitchen Tour. Tickets are $35 and proceeds benefit the Radnor High School Scholarship Fund, an all-volunteer group that awards needs-based scholarships to RHS graduates.

Register online and pick up your tickets and map at the Wayne Art Center beginning at noon on Sunday. Walk-in registrations are also welcome from noon to 2 p.m. Kitchens are open to tour-goers from 1 to 5.