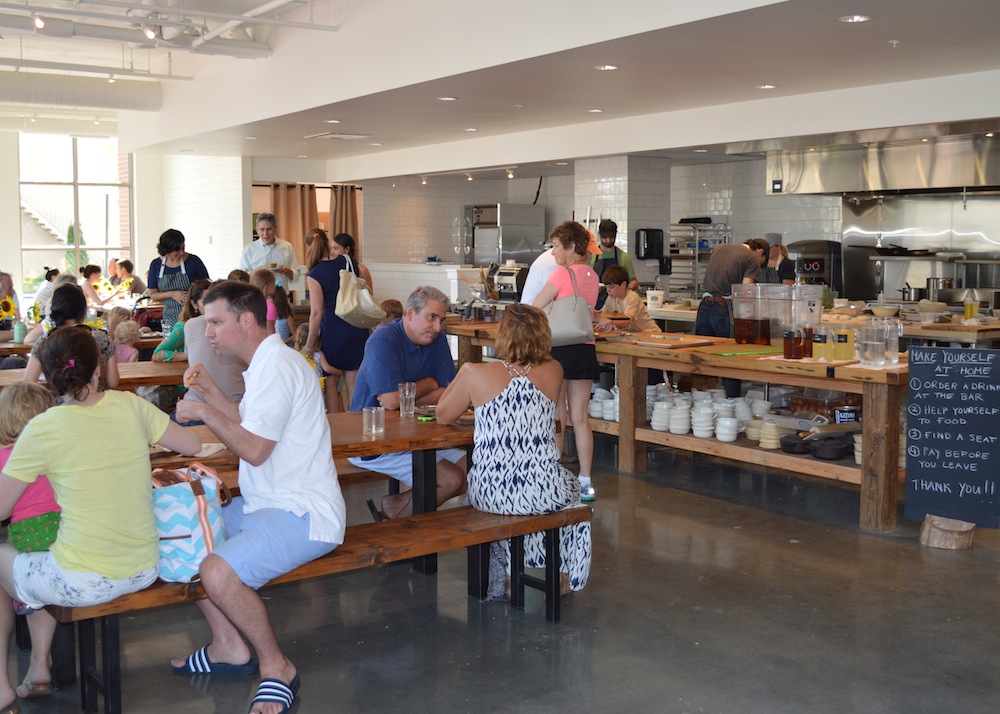 Quirky coffeeshop? Hip bakery café? Yes and yes but the surprisingly spacious Malvern Buttery is more like your favorite aunt’s enormous eat-in kitchen – assuming she’s a terrific scratch cook, uses state-of-the-art equipment and likes company by the carload. Fresh, pure, local, green, whole – there isn’t a healthy-eating buzzword the Buttery doesn’t embrace. Fruits and veggies come from Lancaster County farms; meats and dairy are grass-fed and organic. Grains are whole and heirloom. Sugar exists but in smaller-than-expected doses – zero in the peanut butter and just traces in the pectin-free house-made jams. Everything – and I do mean, everything – is homemade and scratch-baked on site. The décor, too, hints at the homespun and sustainable – all 3,400 square feet of it. The Buttery took drab, double-wide space at East Side Flats’ western edge and imbued it with age and artisanal luster: exposed two-story ductwork, 14-foot communal tables fashioned from reclaimed wood and cool, rough-hewn accents sourced from Malvern neighbor, Life’s Patina at Willowbrook Farm. 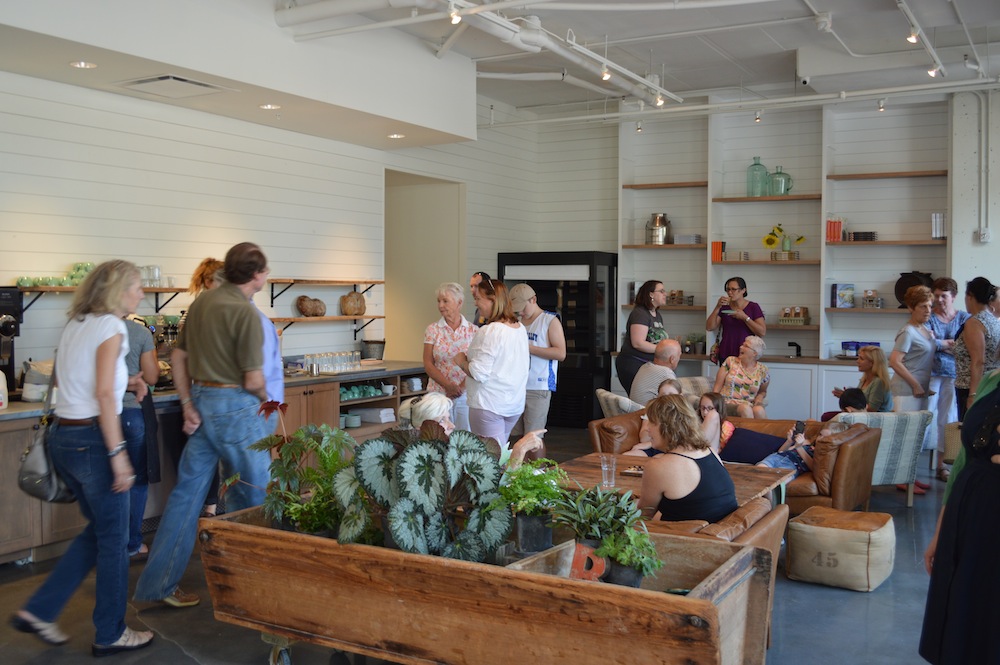 Food is strictly help yourself from the “serving table” – “buffet” being a bad word here. The entire menu is du jour.  In other words, you choose from whatever the cook/baker whips up that day: baked goods, toasts, a frittata and such at breakfast; a soup, a salad and a sandwich at lunch. A $3 healthy peanut-butter-and-jam toasting station ($4 for grown-ups) appeases pint-size palates. 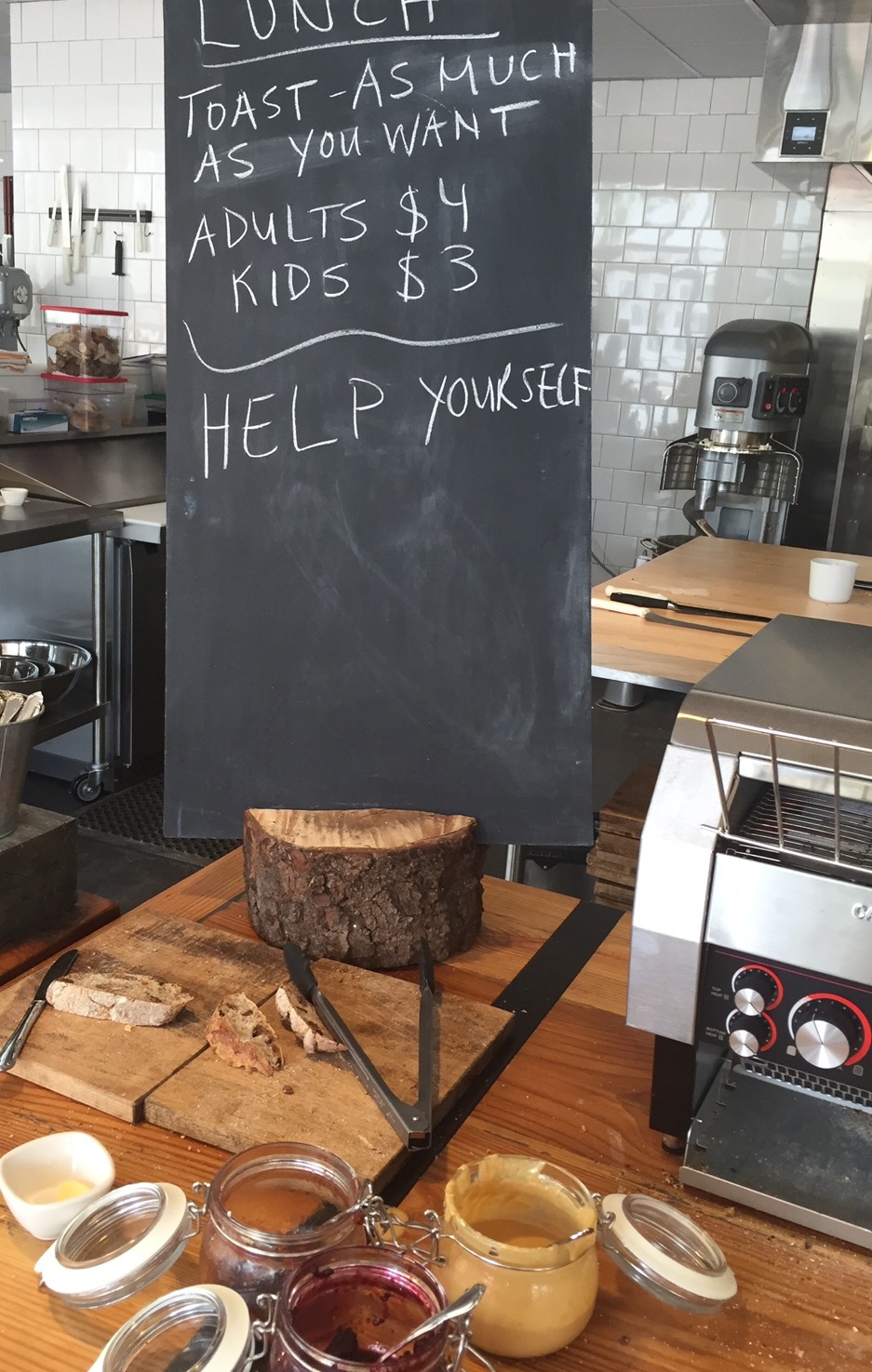 Drinks are poured and served by baristas from a flipped around, no-counter beverage station. Counter Culture Coffee supplies the beans for coffees ($2/$2.50), espressos ($2.50) lattes ($4), cappuccinos ($3.50) and cortados ($3), all sourced directly from coffee farmers. Without the burned-bean bite of Starbucks, Buttery’s brews slide down like, well, butter. For tea fiends, Mason jars display nine varieties of fragrant, loose-leaf Silk Road Teas. For now, the Malvern Buttery works on an eat-now-pay-later honor system – a trusting, small-town touch. 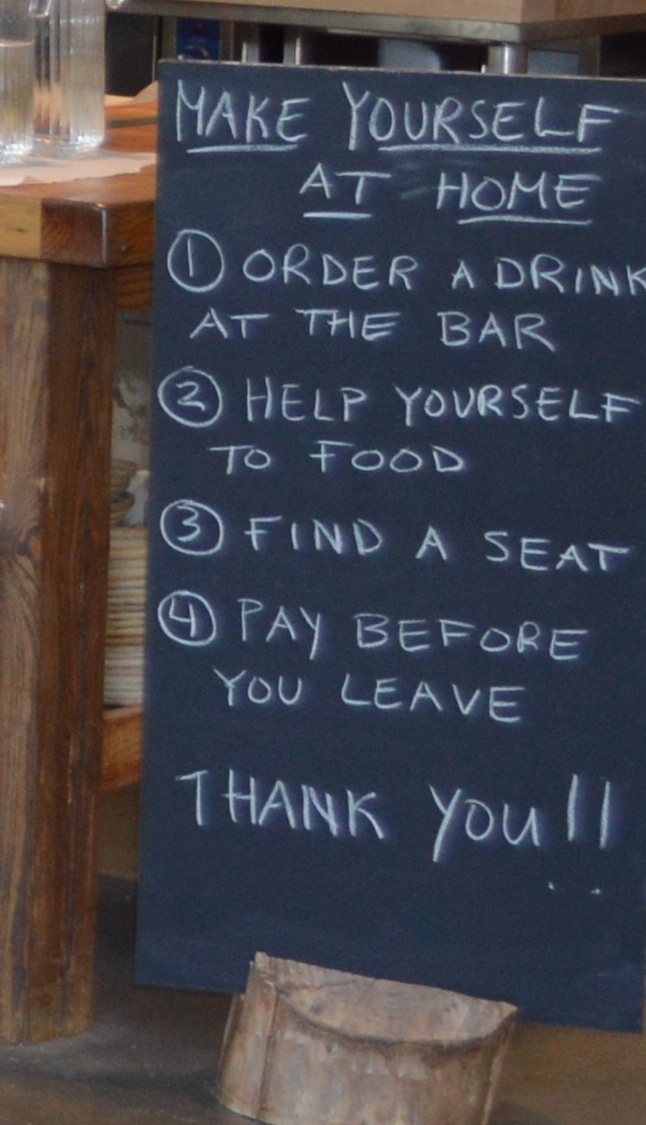 After you’ve had your fill and bussed your detritus to the handy wheelbarrow, 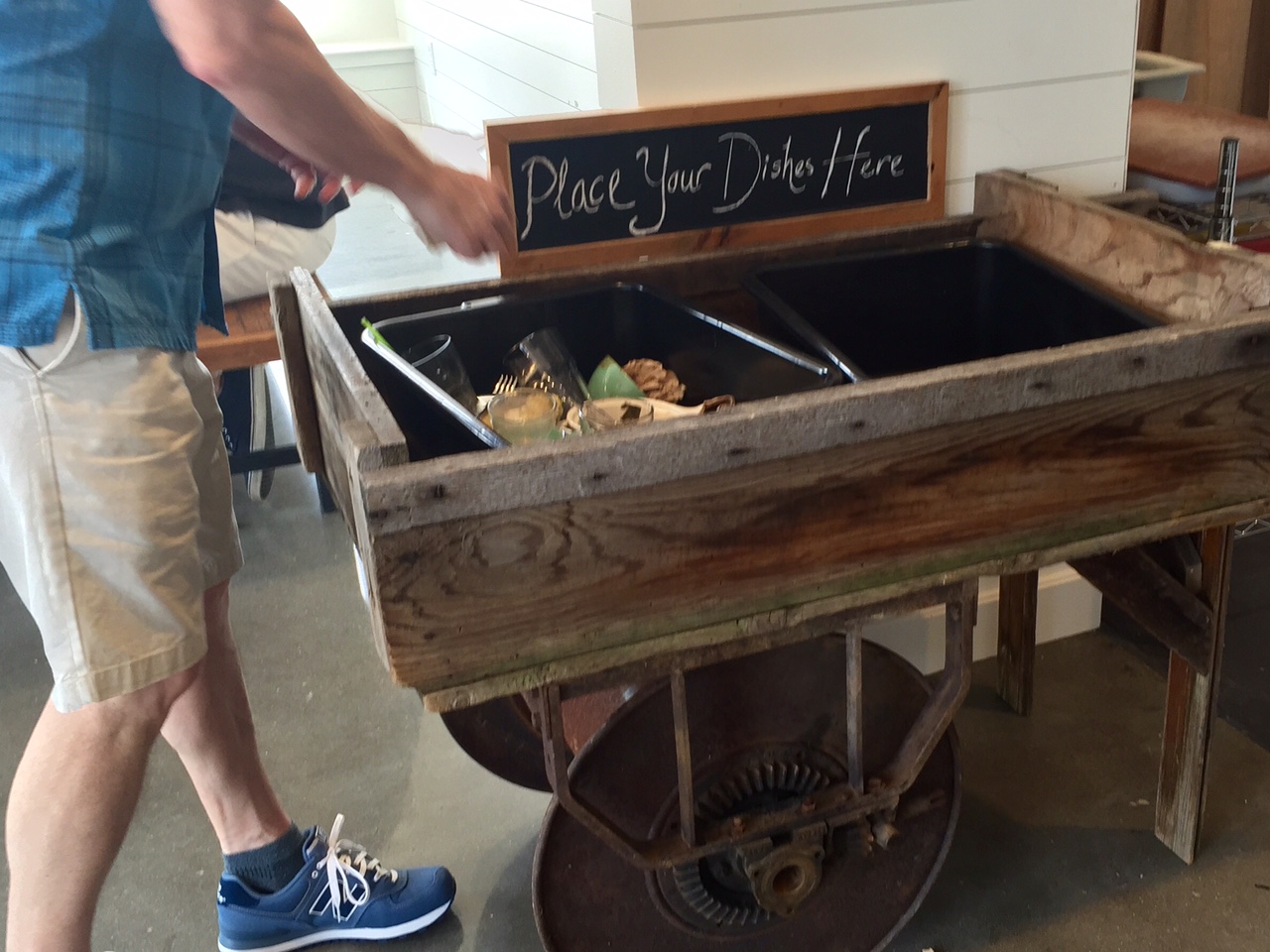 you recount what you ate to whomever’s at the iPad. (And therein lies the rub: memories fail. When he was paying for our lunch yesterday, my husband omitted the ryeberry/pickled radish/shredded cabbage salad we had just demolished until he caught himself raving about it to the owner. “Oh yeah, we had the salad too,” he added, a little sheepishly.) The Buttery is owned and operated by Malvernites John and Silenia Rhoads. 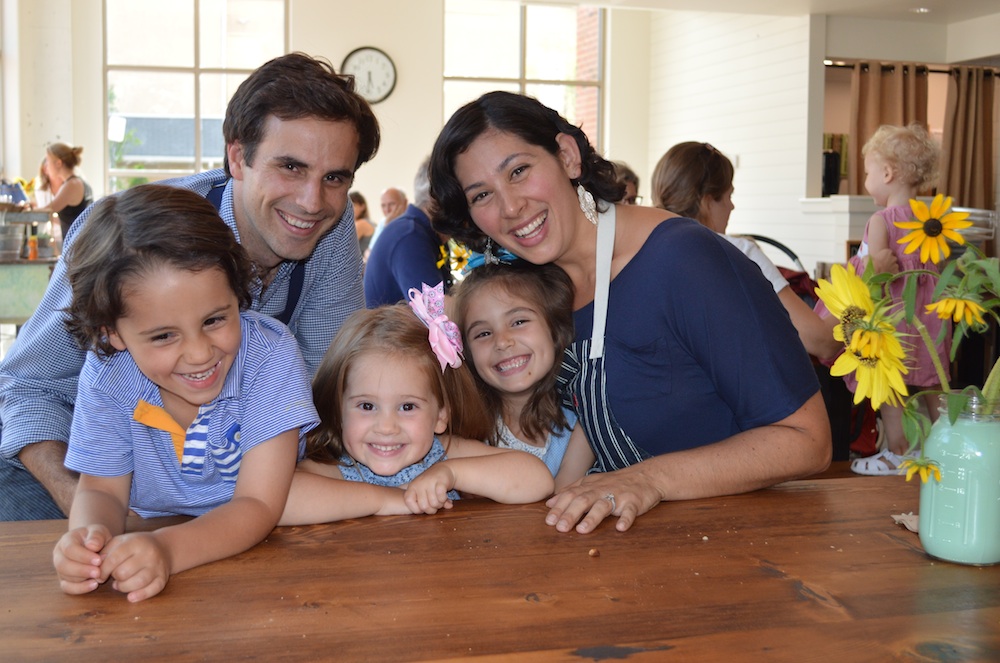 John and Silenia Rhoads and their children, Jay, 4, Lucia,2, and Carolina, 6.

It’s their first foray – and an ambitious one at that – into the fickle world of food service. The two tell SAVVY they’re “major foodies” and embracers of “the green life” who thought Malvern needed a somewhere to “hang out, to read or bring your laptop,” (There’s free WiFi throughout.) They borrowed Buttery’s novel serving table concept (which “breaks down the barriers between you and your food”) from a bakery in England. The Rhoads come by their healthy-and-local food philosophy organically. A Devon native and Episcopal Class of ’96, John has an MBA in sustainable business and, before tying on his Buttery apron, worked to boost local economies by giving loans to farmers. Silenia, a Duke alum, worked in public health education before she stayed home to care for their three kids five years ago. Construction and other snafus delayed the Buttery’s debut by three months. Eager for a peek, well-wishers of all ages turned out for an open house Friday night and a healthy swarm streamed in all weekend. 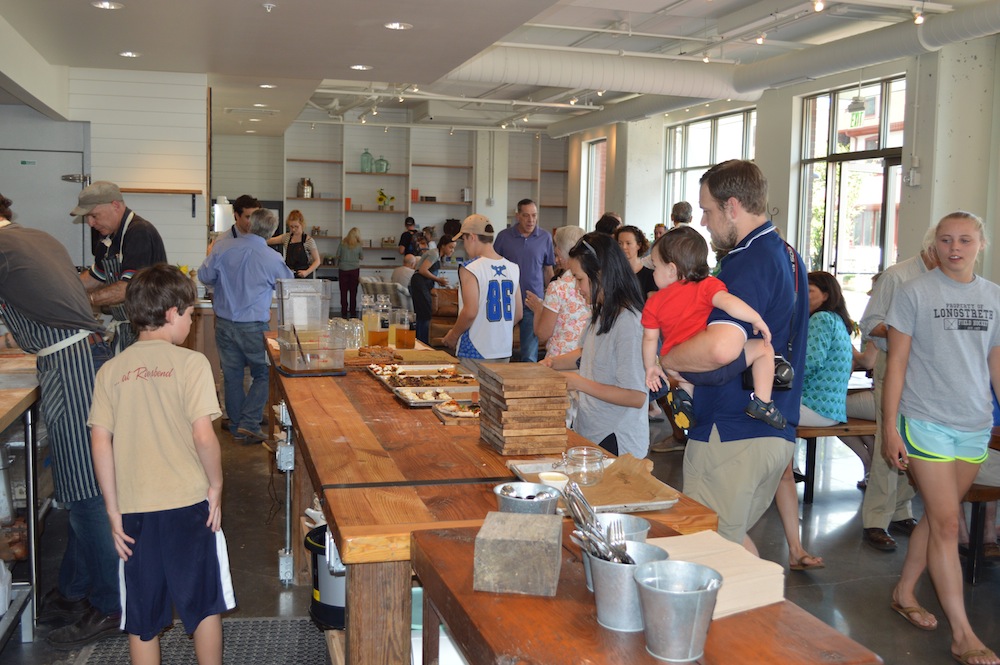 Spotted in the crowd were area merchants and Malvern boosters like photographer Dave Campli and Restaurant Alba owner Sean Weinberg, who shares the Buttery’s eat local ethos. King Street retailers and especially Eastside Flats tenants like Up Home, Terra Culture, Louella and the underused Kimberton Whole Foods have to be thrilled. (Note to would-be merchants and residents: there’s still plenty of space for rent in the Flats.) 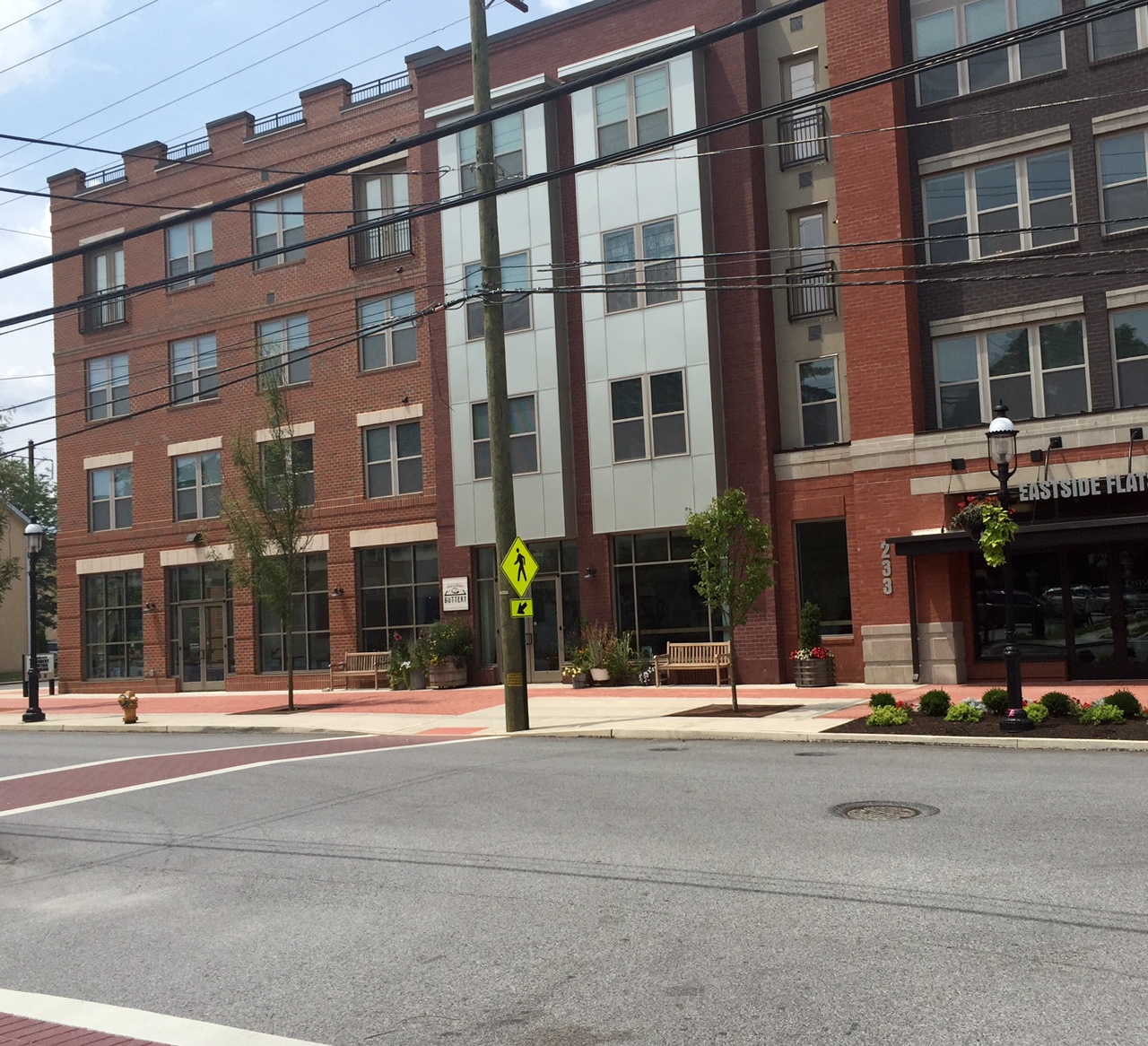 During our visit yesterday, my husband and I sampled the entire serving table. The aforementioned salad ($6.50) was our favorite, but the pulled pork half sandwich ($6.50), grilled corn on the cob slathered in soy mayo ($4), and spicy mushroom/kale soup ($5) were pretty terrific, too. When I was told later that the soft-and-warm cookie ($2) – taken only to taste – was made with dark chocolate chips and 75 percent whole wheat flour, I felt better about having wolfed it. Actually, I wolfed everything at the Buttery but still left smiling – happy to have an independently owned, healthy café in my own backyard and happy about the jolt it ought to give Malvern shopkeepers. GO FOR IT! Malvern Buttery is at 233 E. King Street in Eastside Flats, 610.296.2534. Open Tues. – Fri. 6:30 to 6:30, Saturdays 7:30 – 6:30, and Sundays 7:30 – 4. Free parking across the street and in the rear garage.