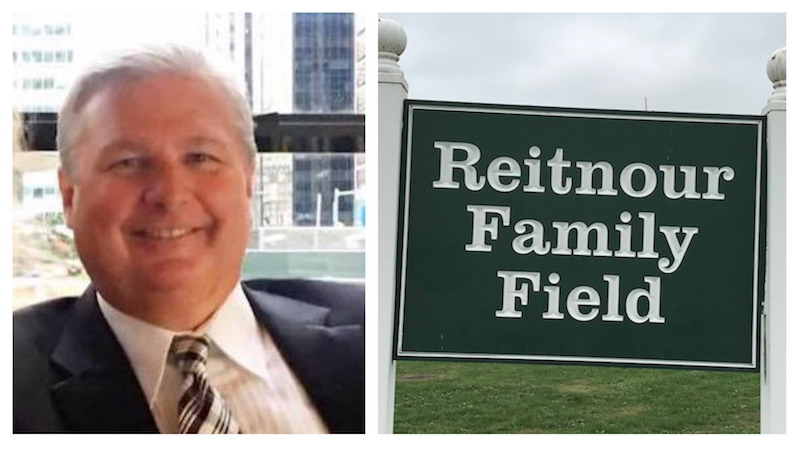 Malvern entrepreneur Philip Reitnour and the field he sponsored in Wilson Farm Park in Chesterbrook.

“We’re looking at it from all angles.”

That’s all Philadelphia police will say about their investigation into the stunning death of high-profile Tredyffrin resident Philip Reitnour, whose body was pulled from the Schuylkill last week.

Perhaps best known as the local guy who went on Shark Tank, Reitnour, 58, had reportedly been shot once in the forehead. His corpse was found floating under the Walnut Street Bridge Thursday morning.

A parishioner at St. Norbert in Paoli, Phil Reitnour was a devoted dad, heavily involved in local youth sports. He was a director of the Shane Victorino Foundation and a trustee of the Tredyffrin Parks Foundation. There’s even a Reitnour Family Field at Wilson Farm Park.

His 8,200 sq. ft. house on exclusive Minden Lane in Malvern is in foreclosure and he was being sued on multiple fronts for alleged unpaid debts and attorneys’ fees. 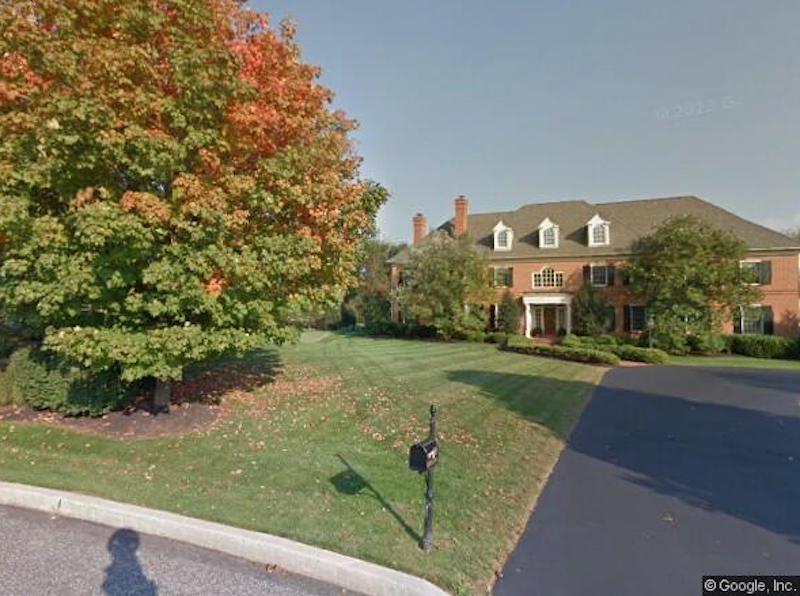 The Chester County Sheriff scheduled the Reitnour home on Minden Lane in Malvern for foreclosure sale this week.

Professionally, Reitnour was a serial entrepreneur with ventures in banking, real estate and oil. In 2012 he founded EmergenSee, a personal security smartphone app that he pitched on Shark Tank in 2014.

Alas, the sharks didn’t bite. Their chief gripe? They felt Reitnour had invested too much of his own money – more than $2 million – in EmergenSee. At one point, shark Mark Cuban remarked that Reitnour was “in so deep, your pant legs are rolled up.”

The Reitnour children this week released the following statement:

“We are so proud of our dad and everything he accomplished. He was a visionary entrepreneur. Despite our tremendous loss, we have nothing but positive thoughts and feelings. He was a great dad and really helped us grow and learn. He shielded us from the challenges he was facing and was always there for us. We miss him terribly but we know he’s looking down on us and everything’s going to be OK. The love we have in our family remains unrivaled.”

Philadelphia police are handling the case but have spoken to Tredyffrin PD. “If there’s a need for information, we will help,” Tredyffrin police spokesman, Det. Sgt. Todd Bereda tells SAVVY.

It was bad enough when former Radnor Commissioner Bill Spingler, 76, was found guilty in June of the indecent assault of his 103-year-old mother-in-law during visits to her Wayne nursing home.

But now, the President of the Board of Commissioners, Philip Ahr, 66, is facing felony child pornography charges and could see significant jail time. 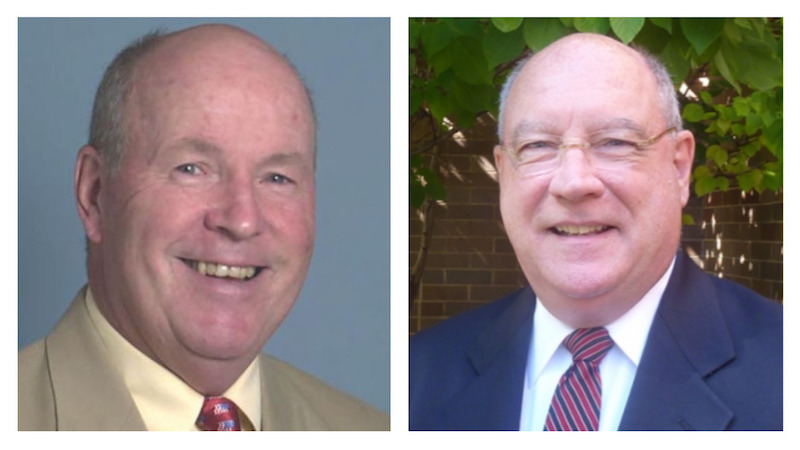 Also raising eyebrows: the fact that Ahr mentored children for 19 years, as part of his company’s philanthropic partnership with a Roxborough elementary school. Thankfully, none of his alleged crimes involved contact with children, authorities say.

An alum of the University of Notre Dame and former Navy hospital corpsman, he was president of the parish council at Our Mother of Good Counsel in Bryn Mawr and was, by all accounts, a well-liked and successful marketing executive.

Ahr’s employer, Progressive Business Publications in Malvern, has since put him on administrative leave. And the Radnor Board of Commissioners plans to elect a new president next week.

Meanwhile, just a day after Ahr’s arraignment, former Commissioner Spingler was sentenced to two years probation for allegedly groping his mother-in-law’s breast during visits to Genesis Healthcare Wayne Center. Spingler has claimed he was simply hugging the elderly woman who had dementia. His probation begins with two months of electronic monitoring in his Paoli townhome.

Reflecting on both criminal cases, Radnor’s police superintendent has called this “a trying time for the residents of Radnor Township.”

You can say that again, Chief.

The hottest ticket in town isn’t in town but in our fair ‘burb – at People’s Light in Malvern.

Indeed, Lights Out: Nat ‘King’ Cole has proven so popular that the theater has “flexed” prices upward  – like Uber during peak periods. Tickets top out at $72 – a record high for People’s Light.

But hey, parking is free. And with just 155 seats, there isn’t a bad seat in the house.

It’s been nearly 12 years since one of the Main Line’s most horrific and high-profile murders: the brutal bludgeoning of Ellen Gregory Robb at the hands of her abusive husband, former Penn professor Rafael Robb, as she sat at her Wayne kitchen table wrapping Christmas gifts.

For her devoted brother, 12 years feels like yesterday … and an eternity.

“I always feel the presence of my sister when I talk,” he explained, fighting tears. 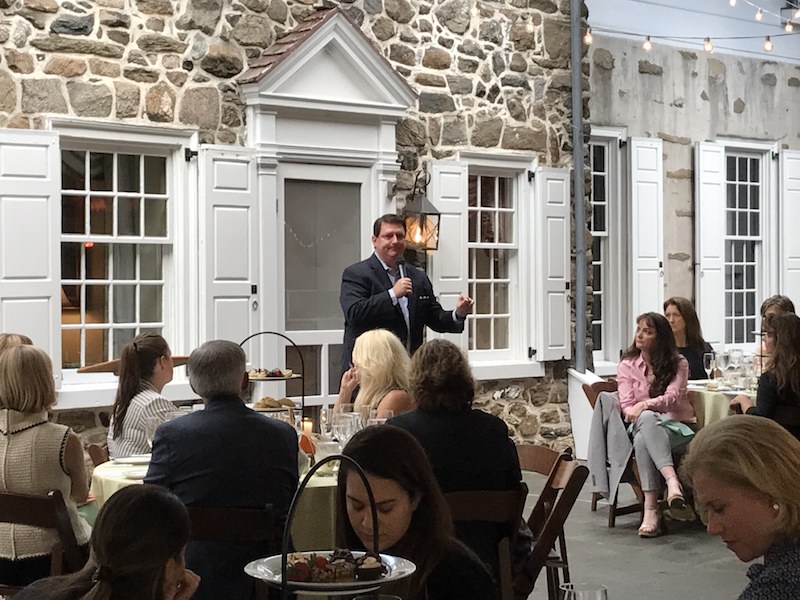 Gary Gregory speaks about his sister’s murder and his crusade against domestic violence on Oct. 11 at Villanova’s Appleford estate.

Calling the Montco domestic violence agency “best in class,” he said he wished only that his sister had known about it before it was too late.

The signs of Ellen’s years-long abuse were all there, he said: her social withdrawal, the bruises she casually explained away, hair clipped short, likely so it couldn’t be pulled. Tragically, she was killed on the very day she planned to finally escape with her daughter to a new life in Boston.

“She made one call to an attorney and all the quicksand was eradicated,” Gregory said, “but if she could have made that call to Laurel House four years earlier…”

His point? If his sister had dialed Laurel House’s hotline (800-642-3150), had tapped into its housing, crisis counseling, legal advocacy and support services, she might not have felt trapped. She might still be alive.

Gregory talked, too, about the injustice of Robb’s recent release from prison. This “killer… is on the street and my sister is serving a lifetime sentence in the grave,” Gregory said.

Now 66, Rafael Robb was paroled in January after serving 10 years for voluntary manslaughter and lives in an apartment near Pittsburgh.

Truly, Gregory has been breaking the silence about domestic violence years. In concert with the outraged Friends of Ellen group, he started the Every Great Reason Foundation (Ellen’s initials) a nonprofit that spurs awareness and helps victims of domestic abuse.

Two local leading lights – one passed, one very much with us – received well-earned accolades last Thursday.

At the Paoli Business and Professional Association‘s awards dinner at the Desmond, the late Brian Zwaan was remembered for his business acumen, his wide-ranging community involvement and his larger-than-life personality. 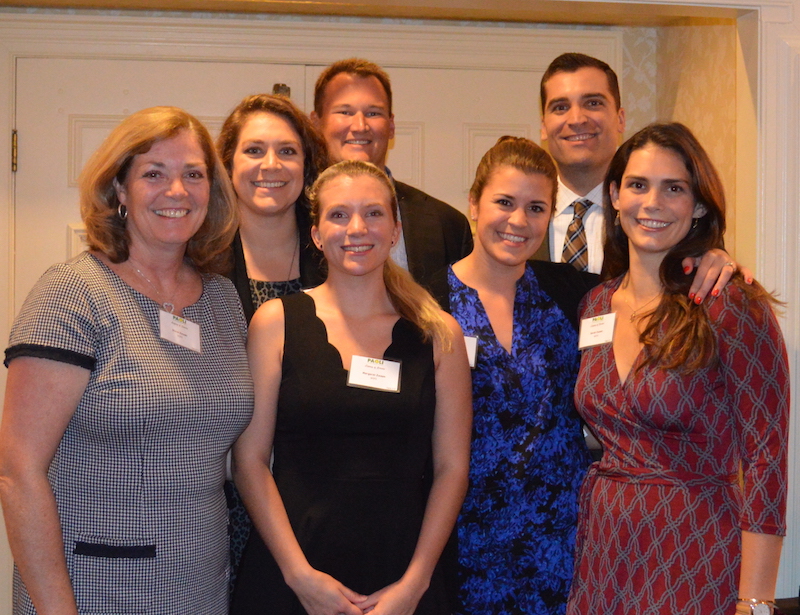 Accepting the PBPA’s “tribute in memoriam” to Brian Zwaan: his widow, Diane, daughter Elizabeth Milne and her husband, Bill, daughters Margaret and Sarah (right), and son Matthew and his wife, Grace.

A “big guy with an unmistakable smile and laugh”, the Berwyn bank executive “lit up a room” and had a “seize the day” attitude, said former PBPA President Brad Zerr.

A nice touch: The PBPA will install a plaque recognizing Brian Zwaan at the Paoli Veteran’s Memorial.

He was vice president of WSFS Bank when he drowned in a body-surfing accident in Sea Isle City last July.

Poignantly, the PBPA had honored Zwaan as its Paoli Business Person of the Year just five years ago.

The night’s other notable honoree was the indefatigable Sandi Gorman, founder of T & E Care, who received the Community Leader Award. 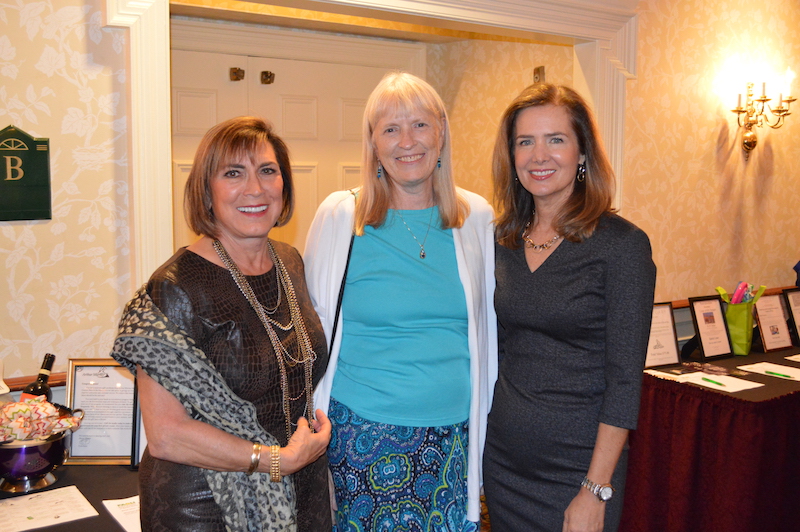 For 12 years, T & E Care has raised and distributed thousands of dollars to local families in need, helping with rent payments, furniture, utility bills, school, camp and daycare costs, among other needs.

Because it falls on Veteran’s Day this year, T & E Care’s annual Fall Fest fundraiser will salute “Everyday Heroes” in our community. In other words, folks like Brian Zwaan and Sandi Gorman.

Keeping girls in school – every day of the month

An overdue SAVVY shoutout to Wayne’s Leslie Roy for piloting one of the area’s most unusual ventures: Project Ensonga.

In two years, Leslie has amassed an army of volunteers – from St. David’s Episcopal Church, Wayne Presbyterian, Shipley, Sacred Heart, Agnes Irwin and Conestoga, among others –  to sew and assemble hundreds of menstrual kits for girls and women halfway around the world. 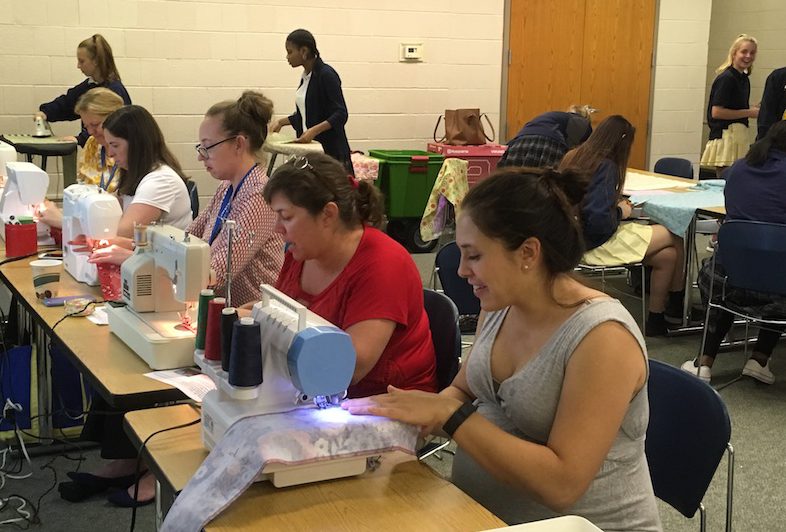 Why? Because in places like Uganda, South Africa, Haiti and Guatemala, lots of girls still rely on makeshift pads made from rags, leaves and toilet paper. They’re unhygienic, ineffective and uncomfortable. As a result, many girls simply stay home from school during their periods, which hurts their grades and life options.

An initiative of the Main Line-based charity, ECHOES Around the World, Project Ensonga has distributed nearly 1,000 colorful sanitary kits, with more in this works this fall. 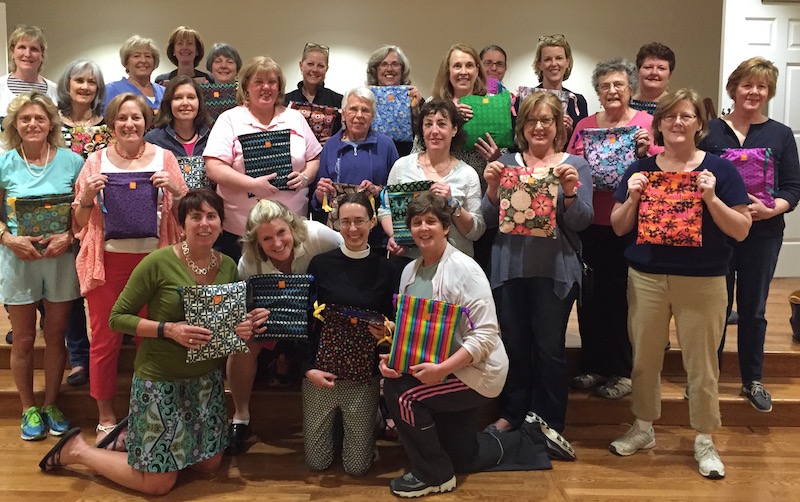 Maintaining work-life balance is a tough juggle, even more so for parents of kids with autism, learning differences and mental health issues. Parents trying to help kids struggling at school AND keep their jobs are invited to a special lunch workshop, “What Should You Do? Solutions for Working Parents,” Oct. 26 at McKenzie Brew House in Malvern.

Hmmm. Not sure what that bauble, oil painting or vase is worth?  Take it to Surrey Services in Devon this Friday afternoon, Oct. 20, and get a professional appraisal from Freeman’s Auctioneers and Appraisers. “What’s it Worth” tickets are $50 for two verbal valuations and include wine and nibbles.

We’re hearing the new Enoteca Tredici in Bryn Mawr Village is slammed seven nights a week. Can’t get a reservation? Some folks just show up and take their chances – management always leaves room for walk-ins. Of course, you can arrive super early; it opens at 4 p.m. daily.

When a haunted hayride or the Narberth Ghost Walk just won’t do, consider going crazy. 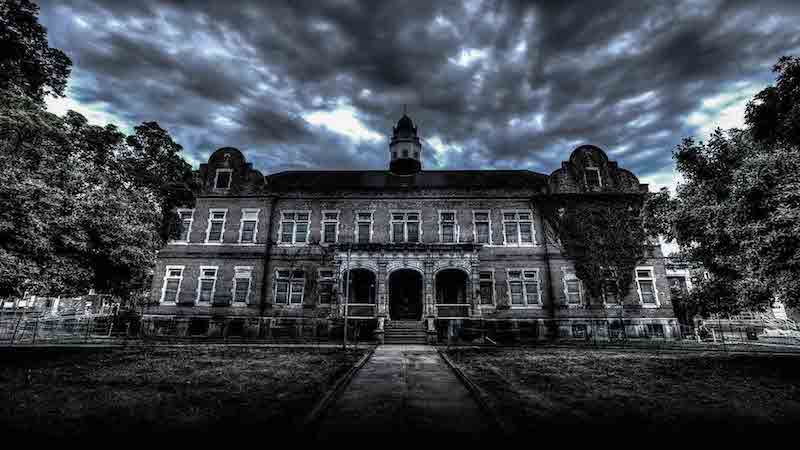 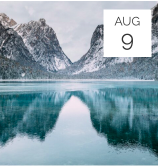 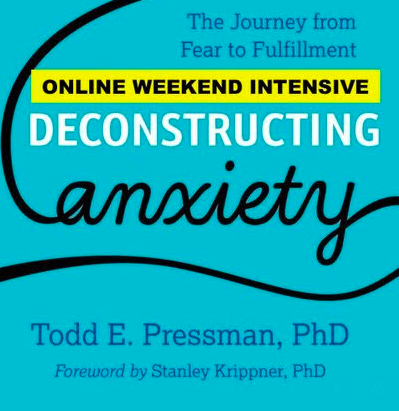