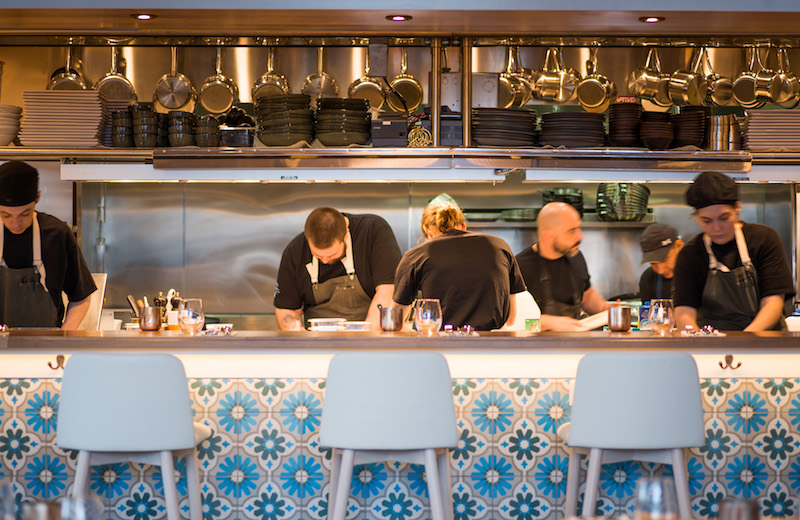 The Chef’s Counter at the new Mistral KOP

Twice we visited the new Mistral – named for the stiff “mistral” winds that clobber the coast of south France.

There’s only one other Mistral on earth – in Princeton – and it’s even smaller.

Assuming you can get past the fact that it’s in a mall, Mistral’s got the makings of a winner.

The knockout décor, for starters. 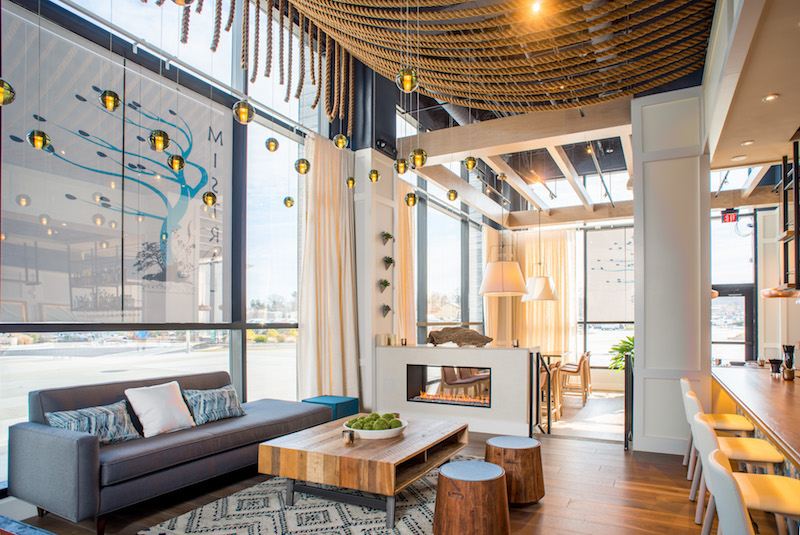 Where West Elm meets the Mediterranean – a vaguely nautical roped ceiling, sea blue accents and either supersized (or super-shrunken) lampshades.

Super-smart design move: putting the square-ish bar squarely in the middle of the restaurant. So no matter where you’re sitting, you’re eating in the bar.

Where the action is. (Just how we like it.) 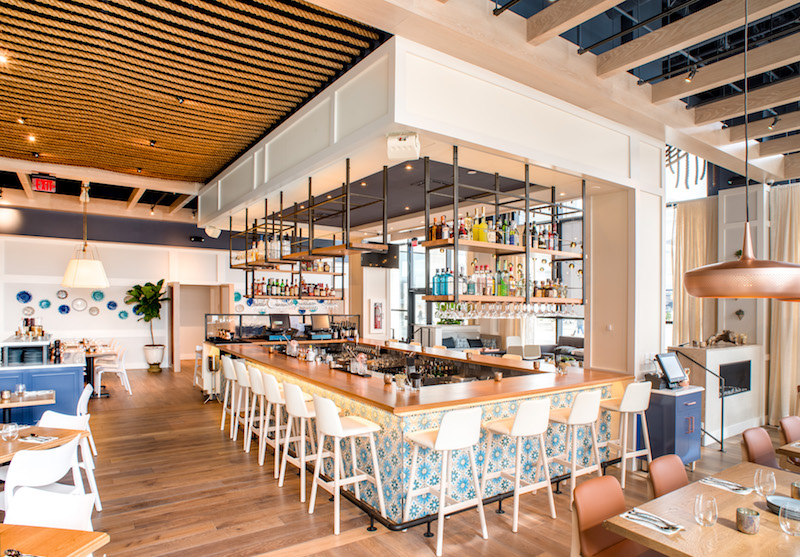 Especially cool for foodies: the chef’s counter view of the open kitchen. (So very Vernick.)

Second best design move is en route: alfresco dining with soft seating around a firepit, heaters and smashing umbrellas (so we hear).

Mistral’s M.O.: Make the patio so swell you’ll forget you’re eating next to a parking lot.

(Never ceases to amaze how fresh air can sweeten the most pedestrian of views.)

Food’s quite lovely, too.

Locally sourced “interpretive American cuisine” is what they’re calling it.

A quibble: The incognito entrance. The place is hidden behind dark windows and a subtle logo. Although we’re hearing that a fix is on the way. (Note to shoppers: You can’t access Mistral from inside the mall.)

Football families kick in for ‘Conestoga 3’

A GoFundMe has been started for the three teens accused in the Conestoga Football locker room scandal. 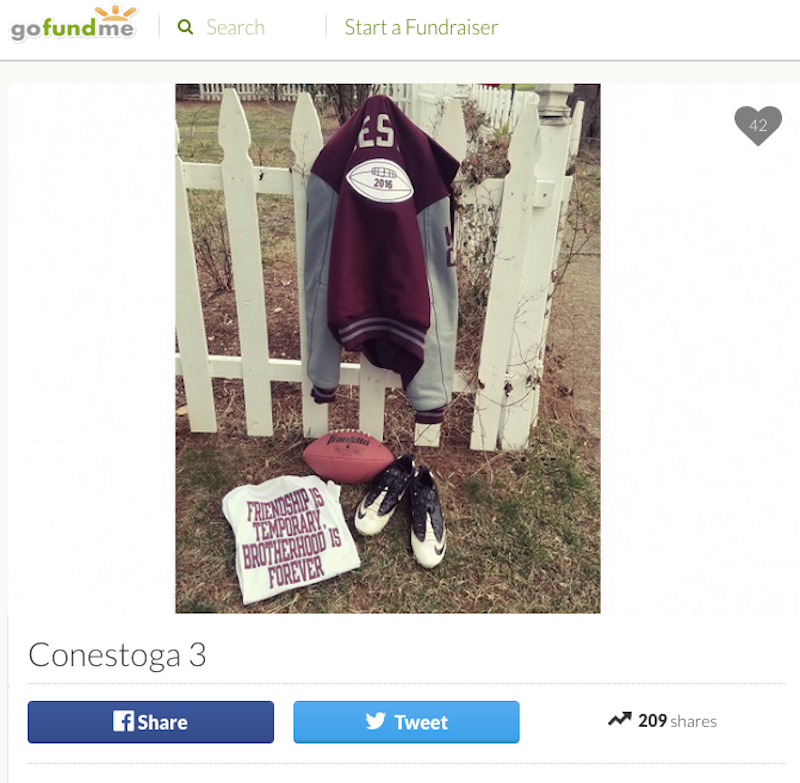 To defend themselves in court, “the families significantly diminished their savings and the boys’ college funds,” the GoFundMe page reads. “One young man lost a scholarship and during this highly stressful ordeal, another lost his father.”

The players were also “harassed by their classmates and suffered online abuse and judgment by the community,” according to the page.

At last count, the campaign had raised $3,130 of its $30K goal, which will be split evenly between the three families.

The fundraiser was started by Stoga parent David Paolisso, whose son played football and was friends with the Stoga 3.

You may recall that the DA dropped assault charges after the students accepted a lesser charge of harassment in January.

We went to great lengths (and heights) to check out the Main Line’s first climbing gym – the new Gravity Vault in Radnor. 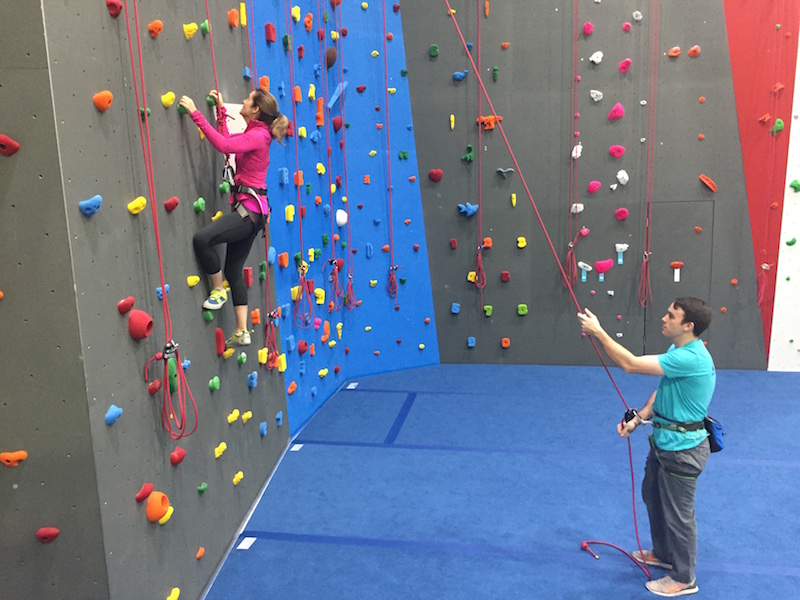 OK. Not so great. But this guy did. 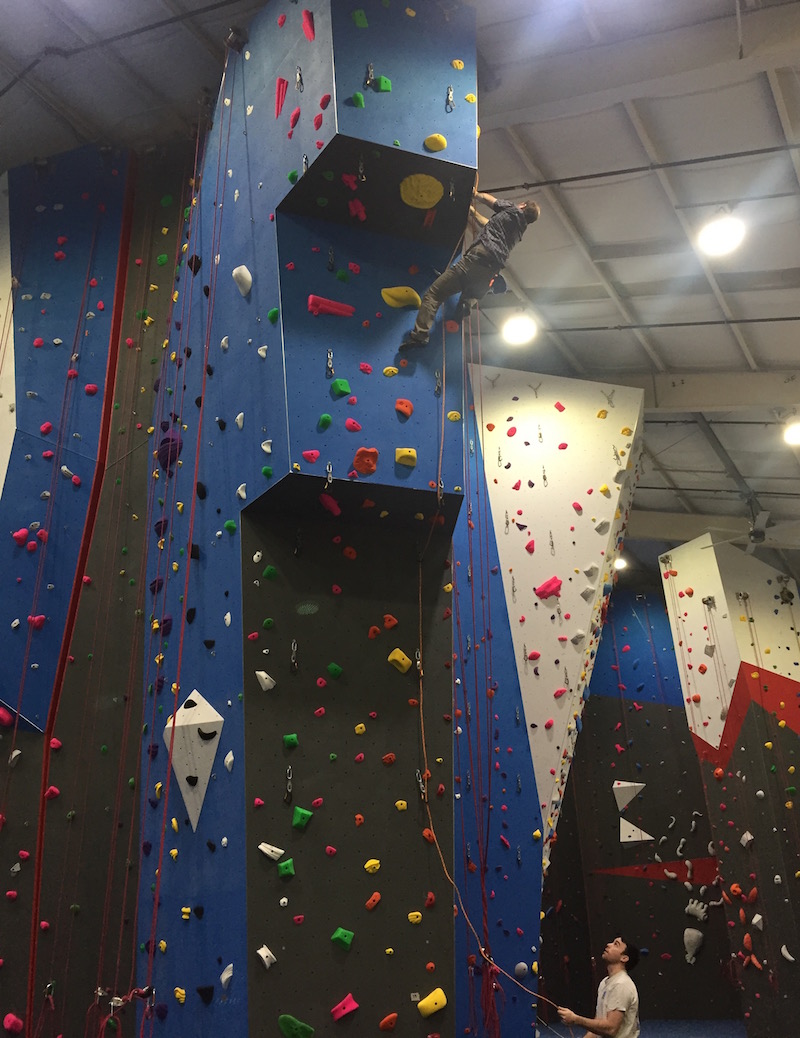 It boggles the mind that this place – until quite recently – was home to two tennis courts at the Radnor Racquet Club. (The Club and the Vault share entrances off King of Prussia Road.)

For experienced folks, there are “double blacks” – including a cave, cracks, rappel tower and chimney.

Newbies (like us) and kids scale beginner walls, studded with colorful emoji, zoo and alphabet holds.

Each climb’s degrees of difficulty is color-coded and numbered, making it easy for geekier climbers to chart their progress.

This is a workout, folks.

Owner Zach Barber tells SAVVY that climbing gets the heart pounding, the muscles screaming and the adrenalin rushing.

Nice endorphin kick, too, as you’re belayed safely back to earth. 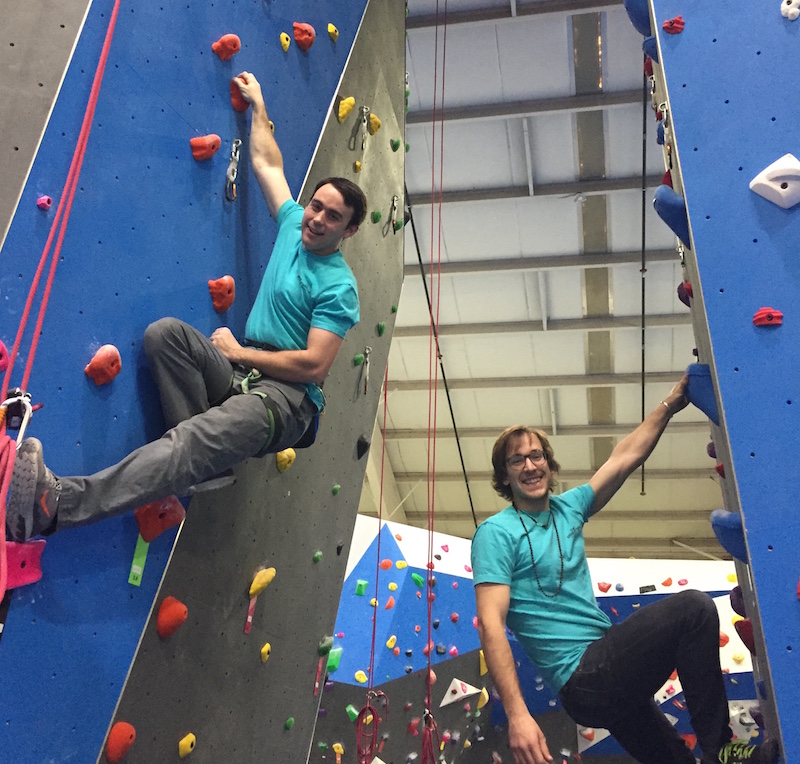 Fear of flying? No worries; they won’t leave you hanging here. You have to pass a test to climb unsupervised.

Seeking extra sweat? Warm up or down in the nicely equipped workout room on site.

Gravity Vault Radnor is the sixth location for the Jersey-based franchisor. It’s only Zach’s first. But give him time; he’s only 30.

An expert climber, it seems Zach’s timing is also impeccable.

For the first time, rock climbing will be an Olympic sport at the 2020 Tokyo Games. The Japanese – along with ex-gymnasts the world over – are mad for it.

Whatever rocks your world.

Making of Rosemont’s Queen of Soaps’ new memoir: a cliffhanger (!) 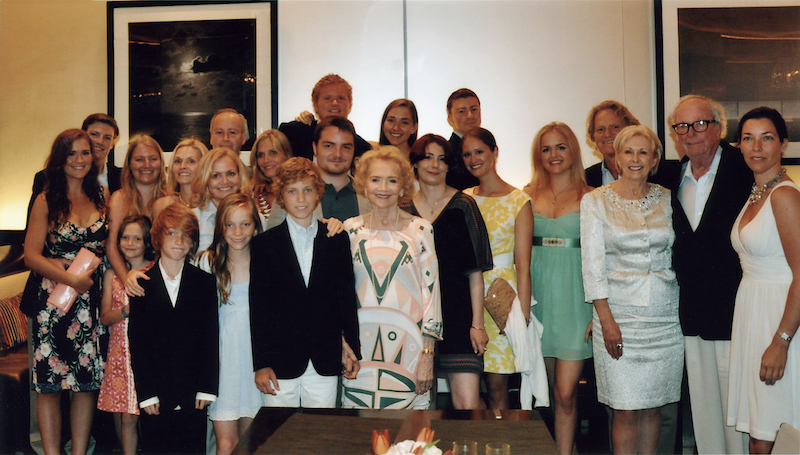 Agnes Nixon and family at the 2010 Daytime Emmys, where she was given a Lifetime Achievement Award.

Bravo to the late Agnes Nixon and ‘All Her Children’ – the REAL ones, not her daytime TV characters.

With a HUGE assist from her kids, Rosemont’s Queen of Soaps pulled off a daunting feat last September – with zilcho time to spare.

Just two days before her death at age 93, she finished her memoir, My Life to Live: How I Became the Queen of Soaps When Men Ruled the Airwaves, published this week.

Incredibly, for most of the four-plus years she took to write it, she was battling the effects of a 2012 stroke.

After All My Children and One Life to Live were cancelled in 2011, Mrs. Nixon “wanted one last shot at her legacy,” says her oldest daughter, Cathy Chicos, who lives in Gladwyne. 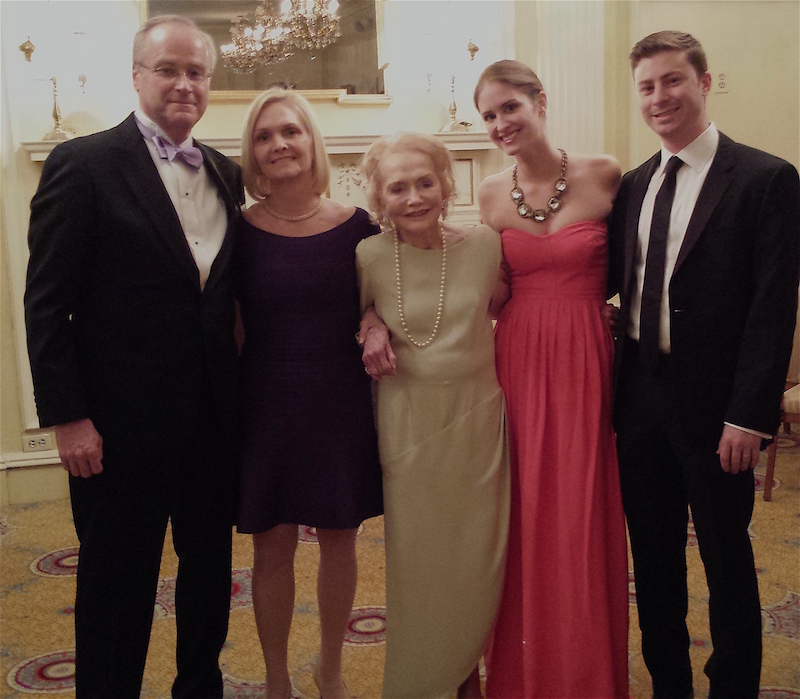 Cathy Chicos with her husband, Paul, her mother, Agnes Nixon, her daughter Kelly Chicos Eisenberg and son-in-law, Jeff, at a Northwestern U. Distinguished Alumni event in 2014.

“After so many years writing dialogue, it was REALLY hard for her to write prose,” her daughter says.

Her mom would dictate, and Cathy, who was “pretty good at understanding her speech,” would transcribe, then read the words back so her mother could “edit auditorially,” she tells SAVVY.

A slow slog, but it worked.

Another daughter, Mary Nixon, says she didn’t help with the book, but did give her mom “many story ideas for her shows due to my struggles with life.”

I am very happy her story is out now,” Mary says.

It’s cool that Carol Burnett wrote the Forward and, of course, Susan Lucci, aka Erica Kane, All My Children’s arch villainess for 41 years, gave it the thumbs up.  But the best blurb came from the (poison) pen of Larry David:

“Aggie Nixon is the only person I’ve ever known whom I didn’t say awful things about. And much to my dismay, her memoir did nothing to change that.”

Kono to Go, pizza-in-a-cone, is coming to the King of Prussia Mall April 1, its first PA location.

Mamma Mia and pass the napkins.

A fast-growing franchise, Kono will operate out of a kiosk near the food court on the Primark/Dick’s Sporting Goods side of the mall.

The second new joint, From the Boot, will debut in the old Vecchia pizza space in Wayne (124 N. Wayne Ave.) sometime in April. It’s the fourth location for the family-owned pizzeria chain out of Montco. (You can still get your Vecchia fix in Phoenixville, btw.)

And finally, the most ambitious of the three: MidiCi will fire up Neapolitan pies in the King of Prussia Town Center come May. Antipasti, salads and booze, too. Stay tuned to SAVVY for deets on this one. (Tough work, we know.)

A Best of Philly fave in Bala Cynwyd, Saffron Indian Kitchen will soon spice up space on Lancaster Ave. that’s giving us whiplash: Peace a Pizza then Melt Down then Mod Pizza then Saffron. Oy.

(Will someone, anyone, please bite on the ramshackle, former McDonald’s in Wayne? Or how about the monolithic former Carmel Café? Or dearly departed Primavera?)

After five years, Wayne’s Vivi G. Shoes has a new home – just across the parking lot at Eagle Village Shops.

Vivi G. will still peddle shoes and bags by, among others, Tory Burch, Butter, and their private Italian label. But they’re amping up their ready-to-wear racks with wraps, tops, Crazy Larry pants, leggings and more.

Another one bites the sawdust

After a 70-year run in the heart of Bryn Mawr, Suburban Hardware is calling it quits.

When he started working at the store back in 1967, owner Charlie Waters tells us he made $1.25/hr.

Presumably, he got a big raise when he bought the place 23 years later.

His lease ends May 31 but Charlie’s not headed for the rocking chair. He’ll work part time at Ricklin’s Hardware in Narberth, which he co-owns with Jed Riddell.

For those wanting to buy from a mom-and-pop hardware shop, he recommends Do it Best Hardware, tucked away on Pennsylvania Ave in Wayne. And Ricklin’s on Haverford Ave., naturally.

J.C. Penney will close at the King of Prussia Mall in June.

So much for the KOP Mall’s bullet-proof reputation.

But here’s a shocker (at least it was to us): When you shop for a TV at nearby Best Buy, you might not be getting help from a Best Buy employee. Seems Samsung and LG (and maybe others) are paying the salaries of sales folks for their products. A store within a store – sort of like the makeup counters at Macy’s.

Chester County just gave $25,000 to its five hospitals, including Paoli, to seed their warm hand-off programs.

After cops,docs and nurses save folks who’ve overdosed, warm hand-off programs – not to be confused with warm handouts – refer addicts directly to treatment and counseling.

The donation proves that Chester County “recognizes that the opioid and heroin crisis is serious and it’s not going away,” says Michelle Kichline, chair of County Commissioners.

Warm hand-offs are just one weapon in the county’s multi-pronged attack. Others include: stepped-up law enforcement to get dealers off the streets, Drug Courts mandating treatment for addicts, community programs like NOPE (Narcotics Overdose Prevention and Education), drug drop-off boxes and efforts to change docs’ prescribing practices for pain killers.

The 25K donation (5K per hospital) came from Chester County’s Color 5K which attracted 710 to West Chester last fall. Take your mark: this year’s Color 5K is set for Nov. 4.

Shoba as Natasha on Broadway. Photo by Nick Gaswirth.

Radnor High grad Shoba Narayan assumed the lead role of Natasha – opposite Josh Groban, no less – in the hit Broadway musical, Natasha, Pierre, and the Great Comet of 1812.

The role’s understudy, Shoba was filling in for two nights.

A short stint, yes, but it marked the first time in ten years (since Bombay Dreams) that a South Asian American woman had a principal role on Broadway. Shoba tells SAVVY the gig was a “whirlwind.” The role is super demanding – as Natasha never really leaves the stage.

“The most surreal moment was putting on Natasha’s coat and making my first entrance,” writes Shoba in an e-mail. “I remember telling myself that for the next 2.5 hours, my only task was to tell her story, be present, and not worry about anything else.”

Afterward, she’d pinch herself. “Josh Groban and I just sang into each other’s faces. Wow.” Backstage, Shoba and Josh would beatbox and dance, she says.

If you didn’t catch her on Broadway, you may have seen Shoba from age 9 to 17 perform in the PA Ballet’s Nutcracker.

Or you may have caught her playing Maria in West Side Story at Radnor, her “most memorable” high school role.

“I had to tap into some tough adult emotions, feel vulnerable on stage and (vocally) learn how to nail that high C.”

Shine on, Shoba. The brightest of futures unfolds before you.